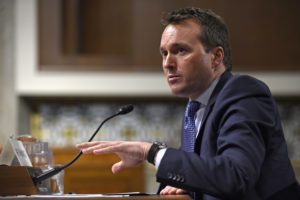 Army Secretary Eric Fanning testifies on Capitol Hill in this January 2016 file photo. Fanning ordered a review after an NPR-CPR investigation found thousands of soldiers diagnosed with mental health problems or brain injuries were dismissed for misconduct. But the new Army report concluded that it treated the soldiers fairly.