June 23, 2012. It's a day devoted to all your favorite bands, DJs and musicians mastermined by Denver's Westword. OpenAir's local music afficionado and Mile High Noon host, Corey Jones and our music director and weekend morning host, Jessi Whitten tell you which artists they're most excited to see and where you can find them amidst the day-long music madness in the heart of Denver.

Jessi Whitten
Choosing where you’ll be and when for what during the Westword Music Showcase is impossibly difficult as different venues boast impeccable line-ups playing simultaneously.  Deciding what bands to show up for is a deeply personal, and tortured decision and, sadly, I’m not of much help.

Westword made this decision easy when the publication crowned Spires "Best New Band" in 2012. Spires returns to the spot where I first saw them live, which resulted in my memorable introduction to the band. Citing influences like Echo & the Bunnymen and Sonic Youth, Spires has quickly matured, hardly sounding like a band that released its first EP last fall.

Rubedo: 12 p.m. at The Church (1160 Lincoln)
I realize I'm making it difficult to decide a destination for the noon hour. Rubedo is still riding the wave of its latest release, the band's debut full length, titled "Massa Confusa". Like the wandering nature of Rubedo's members, these songs travel long, dynamic distances. They stretch themselves sonically, encompassing many sounds and temperaments.

In The Whale: 1:30 p.m. at Stoney's (1111 Lincoln)
I haven't seen two guys rock like this since... well since The Black Keys, who first set the bar so high. It's a fairly common comparison, and a fair one to make. But these dudes represent Denver so well. Rocking in the name of the Mile High City.

Flashlights & ManCub: 4:30 & 5:15 p.m. at City Hall Street Level (1144 Broadway)
If your game is dancing and sweating, you'll be right at home during these two performances. While both duos share members on stage (Flashlights is the project of Ethan Converse, while Alex Anderson helms ManCub--both perform together), each set will include distinct elements of electro-pop. It'll be a solid double dose of synth-driven, alternative-inspired, 8-bit dance music.

Wheelchair Sports Camp: 4:30 at City Hall Amphitheater (1144 Broadway)
This band embodies the punk spirit. Independence. Creativity. Genuineness. Yet they make jazz-hop music, an experimental mix of funk, rap and jazz. Wheelchair Sports Camp can pack the house in other cities like Austin and New York. It's about time their hometown offers up the same amount of love.

Battles: 5:45 at the Mainstage (900 block of Acoma)
Hailing from New York City, Battles will be just the thing to take your mind off the heat. Intricately layered math-rock with progressive and experimental injections. At times ferocious, and yet just as catchy. Battles is the standout headliner in my mind. 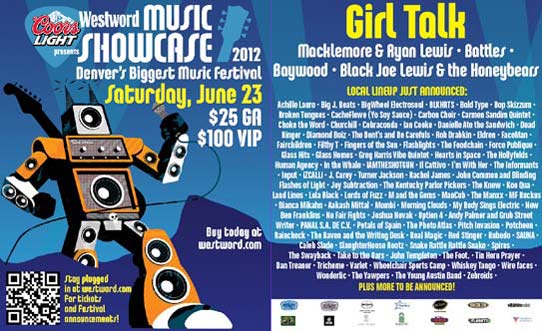