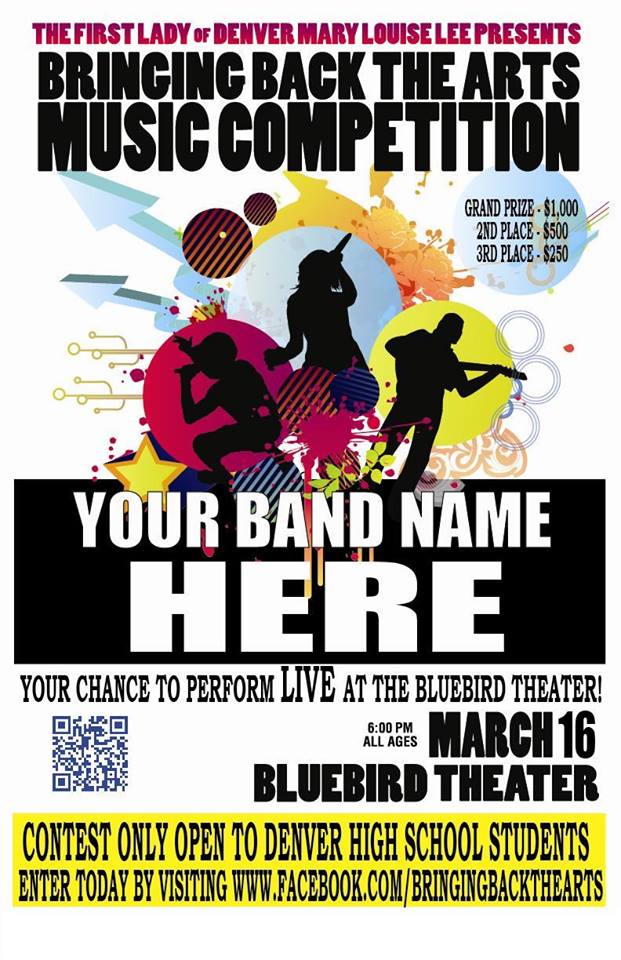 In March of 2012, the First Lady of Denver Mary Louise Lee launched her Bringing Back the Arts (BBTA) initiative as a tactic to increase Denver Public Schools (DPS) students’ access to art, music, dance and theater classes.

As part of this program, each year the BBTA Foundation holds a music competition open to all DPS high school students. Young musical acts from around the city are encouraged to submit a recorded song to the Foundation's judges. From this pool, ten outstanding finalists are selected to perform at Denver's Bluebird Theater in a battle-of-the-bands setting, where the top three acts receive cash prizes of $250, $500, and $1,000. This year's competition takes place Sunday, March 16, and is free and open to the public.

Prior to the event, we spoke with Rachel Chaparro from the Mayor's Office, who has worked closely with the First Lady on the BBTA initiative since day one.

UPDATE: Congrats to the top three acts from Sunday night, who are listed below:

CPR: As a Denver Public Schools graduate herself, what strengths and weaknesses did First Lady Mary Louise Lee recognize in the city's arts education programs that inspired this initiative?

Rachel Chaparro: As a product of Denver Public Schools, the First Lady had ample access to dance, singing, and drama lessons when she was young. After one of her school plays she was recruited for a national tour right that launched her professional performing career. So she knows firsthand what the arts can do for students. There are some schools in Denver that offer a robust arts program, and those that don’t have any at all. For example, we went to Whittier Elementary School and they hadn’t had a music program for 22 years. So parents banded together and raised the money to hire a part-time teacher. We actually worked with Colorado Public Radio for your Instrument Drive to secure the instruments they needed.

After touring a lot of schools in 2012, what we learned is that it’s about the bottom line, not that the principal or teachers or parents don’t want arts education. With the economic reality, it’s the bottom line decision: do we get rid of the nurse or the arts teacher? Schools have had to make some tough decisions. And that’s why she launched the Bringing Back the Arts Foundation. She wanted to make sure the arts were a requirement, not a privilege, and as part of a core learning experience in Denver.

The BBTA program now kicks off its third year with the annual music competition at the Bluebird. What impact has the First Lady’s initiative had on expanding the arts to DPS students in its first two years?

With the BBTA Music Competition, we give students a real-life experience in the music industry. The music industry is competitive. There are different expectations when performing at a professional venue than at a school or at home. With the competition, the finalists work with a professional staff. We select ten finalists with a group of local talent buyers and musicians. We rate and critique their submissions, just like in the real music industry when you submit music to a radio station or promoter. Some of students have gone on to meet with Chuck Morris, the president of AEG Live. We had a young DJ who got to learn some of the ropes from Beatport, the largest downloading website for DJs in the world, based here in Denver. We’ve set up recording studio time around Denver for our finalists.

Recently we sponsored 100 students to attend the Dance of Harlem show, and we’ve brought over kids to Cableland, the mayor’s official residence for concerts, so students learn about music theory. Looking ahead, we’re launching a fellowship program and internship program to increase the access to our cultural creative industries here in Denver to our students.  If they do want to pursue a career in the arts industry, we are opening those doors for them.

The bill for Sunday night features a wide variety of genres ranging from rock to jazz to rap to choir. Given this eclectic blend of music from Denver high school students, what do the competition’s judges look for in these young artists when attempting to objectively select finalists, and ultimately the winners?

We work closely with AEG Live, who generously donates a night at the Bluebird Theater. They bring together local talent buyers and musicians who listen to every song that is submitted. Their judgment is based on overall performance, originality, technical ability, musicianship, and if the song is clean and appropriate. The night of the show we have a celebrity judging panel who rates the acts, and we collect and tally the scores to determine our winners.

The top three acts at the event receive a cash prize, and the grand prize winner also earns an opening performance at a future Bluebird Theater concert. Beyond these immediate incentives, how does the competition along with other BBTA programs encourage young students to pursue music and the arts as more than just a hobby?

We try to connect them to Denver industry people and talent agencies. For example, we work with Ron Jolly, a music teacher at the CEC Middle College of Denver. The school has one of five studios in the nation that can record up to 47 people at once, and Ron has offered that recording space to all the finalists this year. They’ll have an opportunity to put their music on a track and to promote themselves, which we encourage them to do as part of pursuing this career, and we try to give them as many avenues to do that.

The event at the Bluebird Theater on Sunday night is free and open to the public. Why might the competition appeal to fans of both Denver’s local music scene and of live music in general?

Denver has a great track record of growing our own, and that’s one of the core ideas behind BBTA Foundation. Denver has a great crop of artists: Philip Bailey from Earth, Wind, & Fire, the Flobots, the Lumineers. In fact, Jeanie Schroder, one of the members of Denver band DeVotchKa, is on our Board. I think music lovers will appreciate what they’re seeing on Sunday. It’s a great way to support our next superstar from the Mile High City.

The 3rd Annual Bringing Back the Arts music competition starts at 6 p.m. on Sunday, March 16 at Denver's Bluebird Theater. The all-ages event is free and open to the public. Tickets can be reserved via the Bluebird Theater's website.