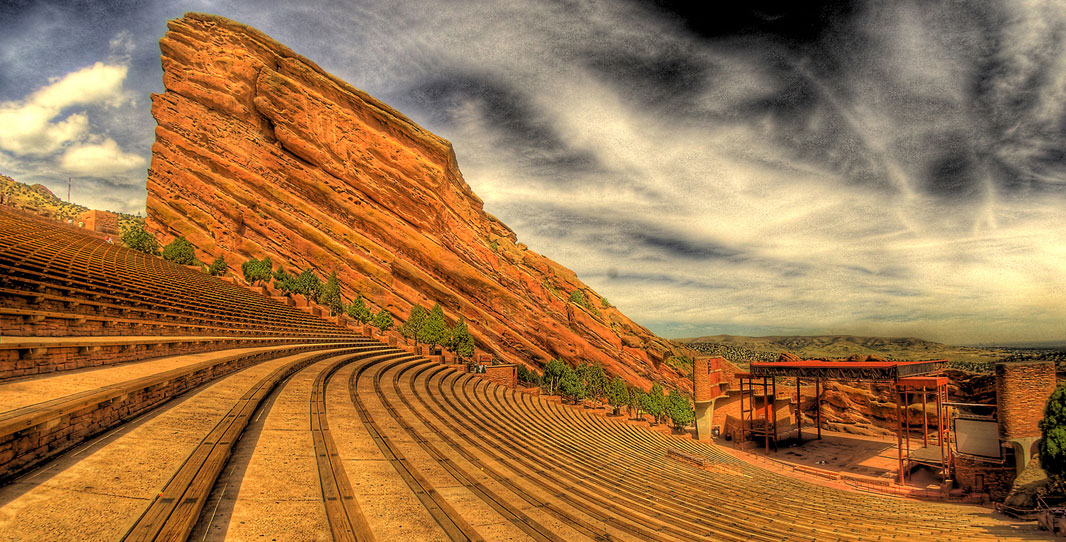 (Photo: courtesy of Red Rocks Amphitheatre)Backstage at the famous Red Rocks Amphitheatre in Morrison, Colorado, history is literally written on the walls: the stairway that leads to the stage has signatures and inscriptions from countless performers that have been blessed to grace the legendary stage. Modern artists such as Bon Iver and The Flobots have had the honor of signing their names to the narrow, rocky stairwell, thereby adding themselves to the veritable who’s who of rock n’ roll history.

However, much of that history cannot be found written on those walls. Alcohol bans, riots and outright bans of rock music have plagued Red Rocks as it transitioned from natural wonder to modern theater.

The first documented performance at the venue, penned The Grand Opening of the Garden of the Titans, occurred on May 31, 1906. The Red Rocks land had recently been purchased by former Cosmopolitan Magazine owner John Brisben Walker, who intended to turn the park into an outdoor symphonic hall. This first performance featured Pietro Satriano and a 25-piece brass band, and signified the opening of the Amphitheatre to the public. A couple years later, the largest scale performance to date occurred at the Feast of Lanterns. Modelled after the event in Nagasaki, Japan which shared its name, the festival included four military bands along with fireworks celebrating the opening of the scenic road on Mt. Falcon. 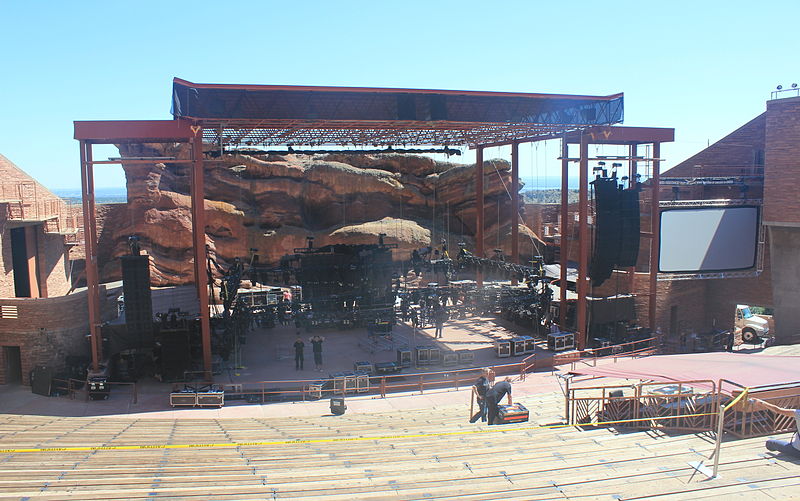 (Photo: courtesy of Mitul0520)Walker continued with his vision of making The Garden of the Titans a world-famous music venue by booking acclaimed opera singer Mary Garden in 1911. After her solo performance, the singer claimed: “Never in any opera house in the world have I found more perfect acoustic properties...I predict that someday, 20,000 people will assemble there to listen to the world’s greatest masterpieces.”

Denver purchased the land from Walker in 1927 for $54,133 (that's $735,129.25 today). Plans were set in motion for renovations and redevelopment. However those plans were put on hold when the stock market crashed in 1929. Construction finally began in 1936 after enlisting the help of the Civilian Conservation Corps (CCC) and the Works Progress Administration (WPA), both of which were agencies created by President Franklin Roosevelt’s New Deal. Modelled after the ancient venue Taormina in Sicily, the amphitheatre was completed in 1941.

Fast forward to August 26, 1964, when the first notable rock show at the venue took place. The headliner? The now world-famous Beatles.

It was the only show not to sell out on the Fab Four's American tour. However, the 7,000 fans they drew broke the box office record for an open-air venue at that point in time. The band was the first of many to require oxygen canisters on stage, as the thin air caused shortness of breath.

Before the show, there had been death threats on the band. Producer George Martin and band manager Brian Epstein remember overlooking the stage and crowd, worrying that a sniper could pick off a band member at any time, from anywhere. Luckily for everyone, the threats never came to fruition.

By this point in 1964, alcohol had been banned from the venue because of two major incidents. In 1962 at a Ray Charles concert and 1964 at a Peter, Paul and Mary concert, audience members had thrown beer cans onto the stage. This set the precedent of banning alcohol at the venue, a ruling that did not last long. 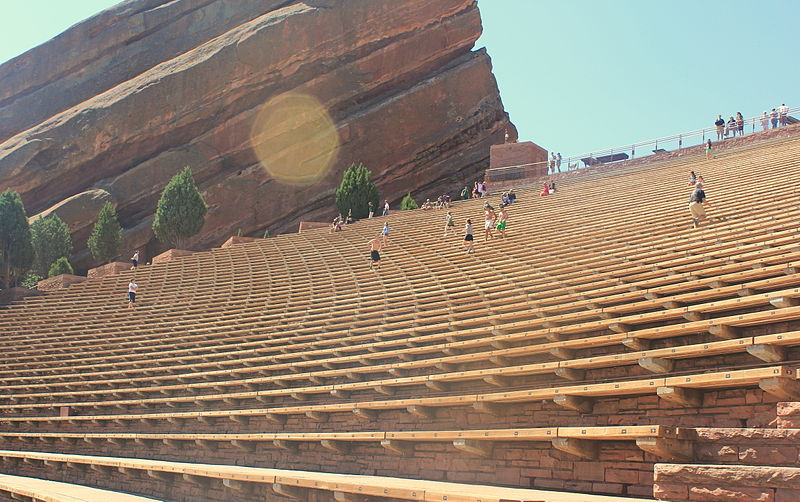 (Photo: courtesy of Mitul0520)1968 saw many legendary acts at Red Rocks, including the only modern Red Rocks performance with no known photographs or audio recordings: Jimi Hendrix took the stage with Vanilla Fudge, a show that only exists in memory. In August of the same year, Aretha Franklin refused to take the stage because of a contract dispute. This caused a near riot that caused the crowd to storm the stage and destroy a piano. The city reacted with a one-year rock ban at Red Rocks in 1969, arguably the most important year of rock music history.

However, the most notorious rock ban at the amphitheater occurred after a Jethro Tull show in 1971. Between 1,000 and 2,000 people showed up to the sold out show sans tickets on June 10, 1971. The crowd was directed to the parking area behind the stage, where they could hear, but not see the concert.

The situation was under control until the crowd began to charge the police line in an attempt to get inside the venue. After the angry members of the crowd began throwing rocks at the police, the authorities responded with tear gas, which was carried by the wind into the paying audience. Attempting to gain control of the situation, the police refused to allow anybody to cross their line, including the band. 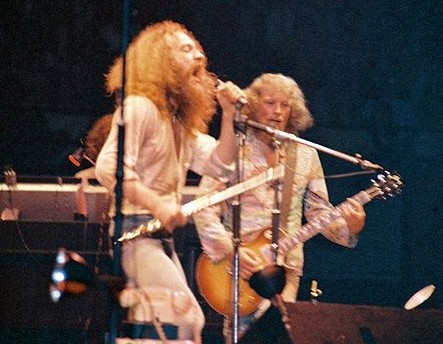 (Photo: Tony Morelli)Knowing he was the only one able to quiet the unruly crowd, Jethro Tull frontman Ian Anderson ran on stage to address the crowd. He instructed concertgoers to wrap their faces with shirts and the show would go on as planned, in hopes of calming the riots. The band went on to play amidst swirling tear gas and sound of riots behind them. Had the band invoked the “act of god” clause in their contract and refused to play, things could have been much worse.

The aftermath of the 'Riot at Red Rocks' saw Mayor William McNichols issue a ban of rock music on the venue. McNichols boldly claimed that there would never be rock concerts at the venue as long as he was mayor. For the next five years only softer acts like John Denver, Carole King and The Carpenters were booked at the venue.

In 1975, a U.S. Circuit Court judge ruled that the city had acted "arbitrarily and capricious[ly]" in their rock ban. The judge is quoted as saying: “Who do you think you are, czars? You're going to tell the people what they should listen to?" Rock music was allowed back in the venue in the summer of 1976, but not before promoters learned a great lesson. The venue began booking multiple nights for large acts, and had better knowledge on how to handle unruly crowds.

The only act that has been banned since is jam band Phish, who played a four night run in 1996. Known for their partying and obsessive devotion to the Vermont band, Phish fans had taken over Morrison for a week. The citizens of Morrison were distraught by the invasion of their town, with fans camping anywhere they pleased and partying all the time. The band was eventually invited back in 2009. 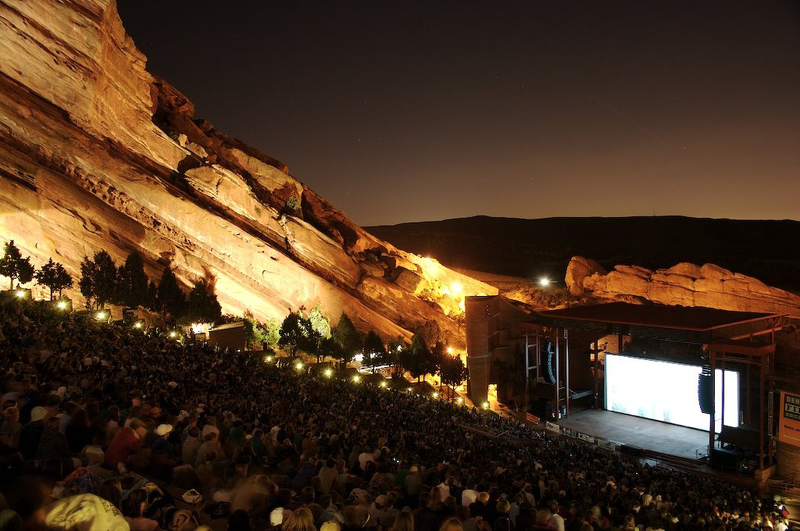 (Photo: David Amirault)Today, Red Rocks Amphitheatre has their crowd control down to a science. Promoters and police alike know when to let a crowd run its course and when to take preventive measures to ensure safety. Multiple night runs are now a common-place to prevent gate crashing and riots. Alcohol cut-off points inside the venue are strict and crowds are treated according to their individual qualities.

Regularly believed to be the best outdoor venue in the world, the Amphitheatre is now a tourist destination and local treasure. The venue is as woven into Colorado culture as skiing and biking, as microbrews and hiking. Countless artists have described playing on the famed stage as “a dream come true” and “the pinnacle of their career.” There is something enchanting about the venue, with its recent history only further adding to the mystique. Simply put, Red Rocks is rock n’ roll.