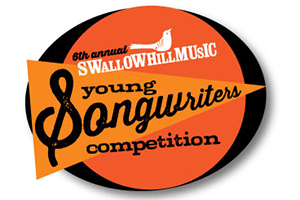 The Young Songwriters Competition is an annual event curated by Denver music school and performance venue Swallow Hill Music in which Denver-area middle and high school students submit a recording of an original song for review by the competition's judges.

Its 2014 edition, the sixth such event since its inception, culminated with the top selected artists performing their pieces in a live setting for a panel of judges. Prizes included the honor of an opening set at a Swallow Hill Music concert, along with scholarships to the Swallow Hill Music School, recording studio sessions, and gift certificates to local businesses.

On May 2, Thomas Martin was named the winner of this year's Young Songwriters Competition for his song "Another You."

Martin, a recent graduate of Lakewood High School, has been involved in music for many years: he's been singing since he was five as well as playing percussion and piano and writing his own music since he was 11. Last year, he placed as a finalist in the Swallow Hill Music competition, but this year he took home the Grand Prize.

He plans to release his first EP, "Stop Signs, Yellow Lines," this summer, with a full-length to follow. He also plays with rock group the Junk Band Orchestra, and volunteers as a music teacher for Denver city youth. In 2015 Martin will be attending the prestigious Berklee College of Music in Boston.

We were thrilled to have Martin in our studio to hear firsthand the young talent that Denver has to offer. In addition to playing a couple piano tunes, the young musician spoke with Keefer Fulgham about the influence of hearing Emmylou Harris for the first time along with his plans to pursue music as a career.

Stream the session and interview above, and watch video from the performance below.