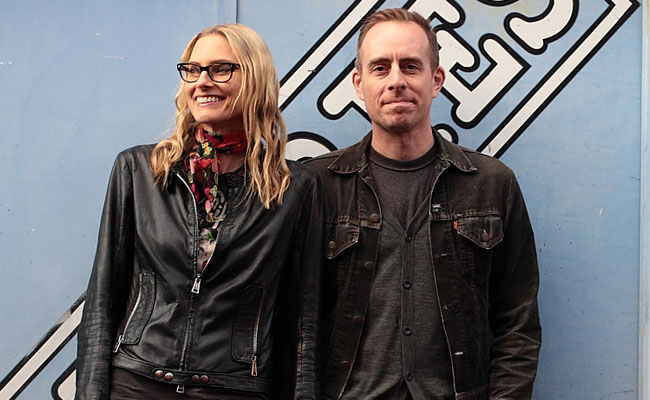 (Photo: courtesy of the artist)Aimee Mann and Ted Leo have maintained respective decades-long careers in alternative pop-rock, and have been friends for years. But it wasn't until Leo had an opening slot on Mann's 2012 tour that the two realized the potential for their new musical collaboration as The Both.

"I had written a new song that I was working out on the road before Aimee had even asked me to do the tour," says Leo. "I started the song and it actually made me think of Aimee."

"It was a song that when I was watching Ted's set, I kept hearing a bass part and having this yen to play bass on it," says Mann. "Which is really unusual for me."

Mann began sitting in on Leo's set, and the partnership soon led to a fully-fledged project, The Both.

We spoke with Mann and Leo prior to their show as The Both at Denver's Bluebird Theater on Saturday, August 9.

Read some highlights from the interview below, and stream the audio above:

Aimee Mann on how to collaborate on a song:

It's like sharing a plate of French fries. The person has to be sitting with you right when the French fries are served. Otherwise, you're gonna eat them all...If Ted's a little slow on the uptake [when writing a song], there's the danger I might just finish it.

Ted Leo on writing with Aimee:

I find it very easy for us to come together on stage and complement each other's energy and songwriting styles. As opposed to there being a careening back and forth between me being the "up guy" and Aimee being the "down lady"....writing together has helped us get closer in writing towards each other.

Aimee Mann on incorporating humor into her live music show:

What I discovered by [touring with comedians]...is when people laugh because they're listening to jokes or comedians, it helps them to focus when more serious songs come after that. I really value and appreciate the way humor resets your brain for certain other things.