It's Kids Music Week at Colorado Public Radio. From Sept. 8 to 12, CPR News, CPR Classical, and OpenAir will feature programming that highlights young people who have taken up the art of music and the organizations who provide the opportunity for them to do so.

In honor of Kids Music Week, the OpenAir hosts have shared some favorite musical memories from childhood. Read how music influenced each of our hosts to pursue a career in radio, and share your own formulative music memories in the comments below:

It was 1965, my first trip to Florida and to the beach. I had never seen the ocean and I couldn't wait. I was sitting between my mom and my grandmother in one of those old Cadillacs, the ones with the bat wings. As we cruised up the levy, there it was: the Atlantic Ocean, the biggest thing I'd ever laid my eyes on. But then, out of the AM dash radio came a sound like I had never heard before: "She loves you, yeah, yeah, yeah." It hit me like a lightning bolt. My six year old brain was being fried. The ocean, who cares? It was a mere puddle to me now. I was listening to the Beatles and life would never be the same....

I had a relationship with the radio from a very young age and weekend mornings I enjoyed listening to the Top 40 countdown. I loved my boombox and would sit in my room ready to record my favorite songs onto cassette. I also remember the neighbor kids loved coming to our house because many of their parents banned MTV or they didn't have cable, but my parents allowed it. I lived for practicing my best David Lee Roth on our mini trampoline whenever my favorite music video "Jump" was on. My other two favorite videos at the time were The Cars "You Might Think" and Michael Jackson's "Thriller," which I watched with one eye open!

Growing up my dad worked long hours at a job that I still can't comprehend, but I remember that he used the phrase "return on investment" with frequency and intensity. He'd get home just before my bedtime with an urgent need to decompress, but still wanting to spend time with his hyper single-digit daughter. Our ritual became that he'd come home, turn his stereo up to 9, and I'd either dance for him or we'd just sit there, quietly appreciating the music together. Simon & Garfunkel, Queen, Genesis, and others became the soundtrack to our father-daughter time. Music has been and continues to be my way of connecting with people.

I was really tiny when Elvis hit, but was aware of him being everywhere. But my earliest memory of rock and roll barging in on my "Leave It to Beaver" world came when I was spending the afternoon with my babysitter, the head cheerleader. I was playing Disney records on my little machine while she was doing homework. A roaring motorcycle touched down in our front yard and this greasy-haired guy in a black leather jacket walked his heavy boots into the house: her boyfriend. He took the needle off my nursery school stuff, said something about that kind of music giving him the willies, and turned the TV on to "American Bandstand" at a volume my parents had never let me know existed. They danced for the whole show, but I got all the laughs bunny hopping to Danny and the Juniors' "At the Hop." Sometimes the cosmos click just right.

As a kid with a "Type A" family, it was often hard to have moments to myself. Music turned out to be one of my few escapes from reality, and after purchasing an expensive CD player (with 30 whole seconds of skip protection), and a case of AA batteries, I never entered a stressful family situation without a few of my favorite albums. Putting my headphones on and spending time alone is still one of the most comforting things I do. 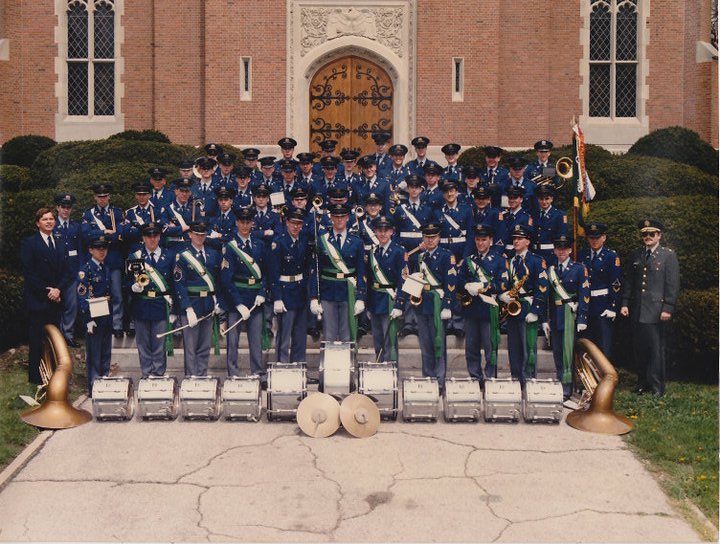 I was a textbook example of a band geek growing up in the '80s, so a lot of my music memories were formed while playing percussion instruments in the back of the band. I went to a military school in the midwest, and during the spring of my senior year we put on a special outdoor concert featuring the "1812 Overture." We were set up on the steps of the chapel, which was situated on top of a small hill that looked out over a parade field and a lake just beyond. The chapel had a 51-bell carillon and, being a military school, we had a set of Howitzer cannons down by the lake for the big climax.

A storm started to roll in over the lake with lightning dancing in thick black clouds. The wind began to pick up just as we got to the part where the bells kicked in and the cannons started firing and I was wailing on the tympani: it was glorious. I have no idea how we sounded in reality -- but I was a rock star that day.