Inspectors say they found numerous serious code violations at Glob and Rhinoceropolis, which both occupy the same converted warehouse.

The move comes less than a week after a deadly fire at a similar space in Oakland, called the Ghost Ship. But Denver Fire Department spokeswoman Melissa Taylor did not say there was a direct link between the Oakland fire and the closures in Denver.

Taylor said the department would have reacted the same way whether or not the Ghost Ship fire had occurred. That said, lots of cities seem to be taking a closer look at these types of unpermitted live-work spaces.

However, the Denver warehouse is unlike Oakland’s Ghost Ship in some key ways. Both had been divided into smaller rooms and had a large performance space. But Glob and Rhinoceropolis's hallways are open and the building is well-lit. The Ghost Ship, on the other hand, has been described as being full of clutter, and it had just one staircase out of its second floor.

One of Glob's residents, Warren Bedell, said the space has passed fire inspections in the past. 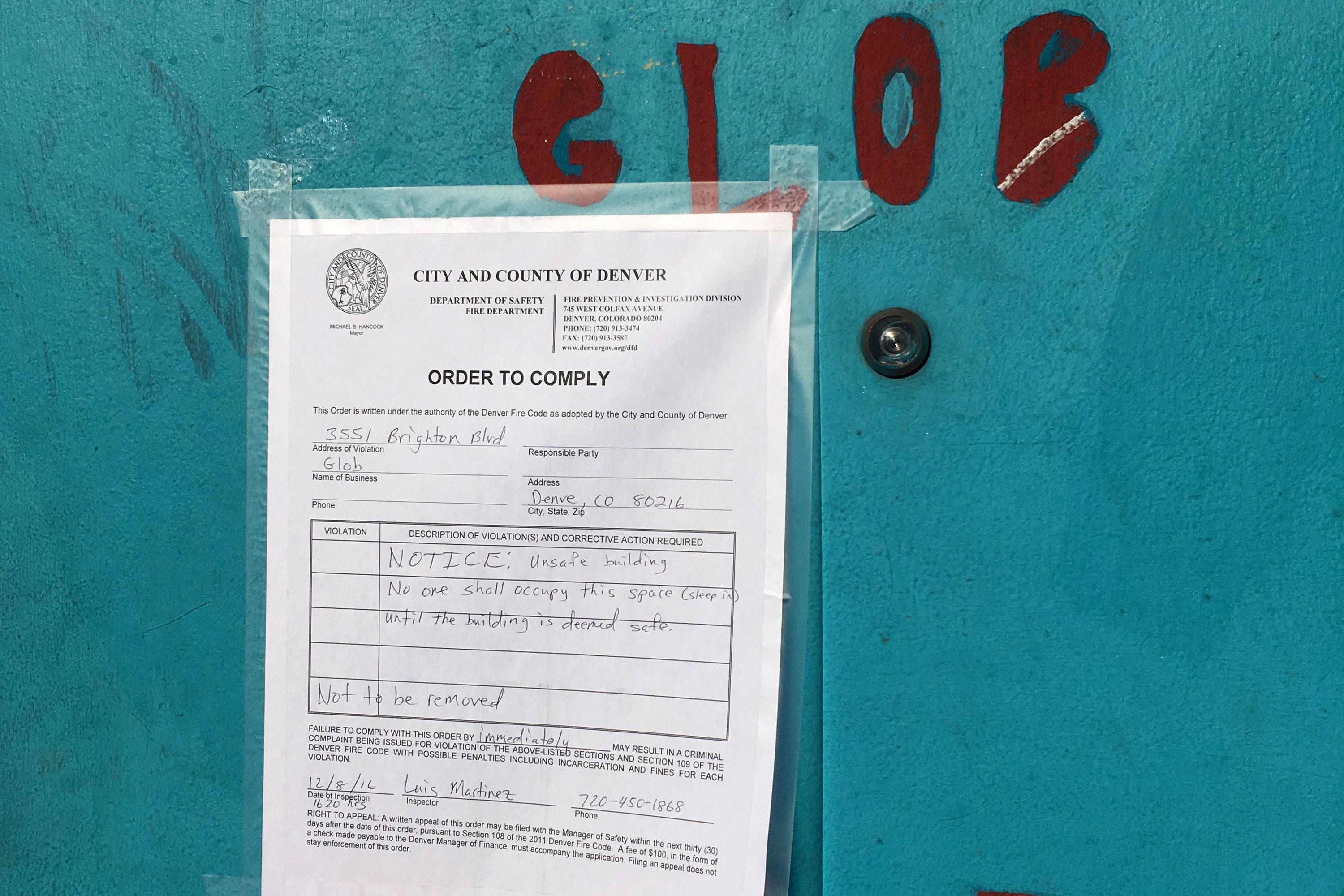 “I feel like people would be very safe here,” Bedell said. “We have exits on both sides. We keep everything really clear, and we don’t have piles of flammables everywhere.”

But the fire department said it was unaware until now that people were living at Glob and Rhinoceropolis; residential spaces must meet much stricter codes. And Thursday's inspection identified multiple issues, including a lack of smoke detectors and sprinklers. Inspectors also found other, more minor, fire code violations, like an over-reliance on extension cords. The fire department has completely shut down the building until the owner fixes the issues.

"It was a relatively easy decision to come to," the fire department's Melissa Taylor said at a press conference.

Former residents are stunned by the closure. Bedell said the warehouses were a safe space for Denver's creative community -- not a party scene.

“This is the thing that I’m most proud of that I’ve done with my life,” Bedell said.

Others said the closure adds insult to injury because it comes as they're mourning the victims of the Oakland Fire. Artist Stephan Herrera said this part of the arts community is very close knit. He called the city's reaction inappropriate.

“It’s basically a witch hunt for DIY spaces all around the country right now,” Herrera said. “They’re just taking away the spaces that are most sacred to us.”

In a statement Friday, the RiNo Arts District called the inspection a “knee-jerk reaction” to the Ghost Ship fire. The district also said it would work with the Denver warehouse owner and regulators to open the building as a music venue as soon as possible.