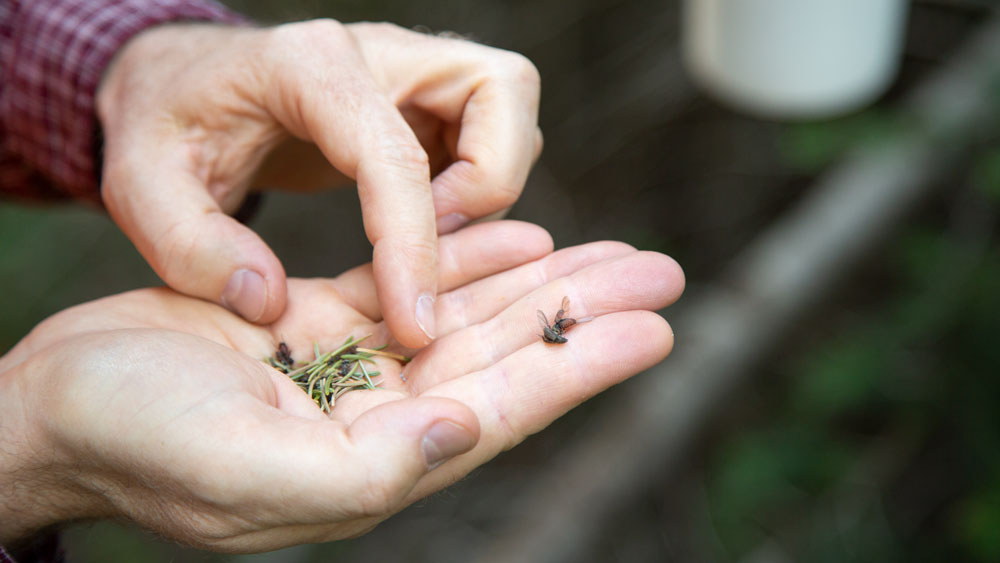 The discovery was accidental for Seth Davis, an assistant professor of forestry at CSU who led the study. The team originally intended just to document where the beetle population was, as well as hourly temperature data. The researchers ended up collecting about 70,000 beetles.

“We placed traps essentially all across the state, across the latitude of Colorado,” Davis said. “And Isaac Dell, the student on the project, would then service them weekly throughout the growing season. So he would drive up and down, from Fort Collins down to Durango, on a weekly basis, collecting insects out of these traps.”

Spruce beetles have long caused problems for Colorado. The invasive insect has chomped on about 40 percent of the spruce fir forests in the state over the last couple of decades. Some of the most striking damage can be seen in Rocky Mountain National Park, the San Juan Mountains, the West Elk Mountains and the Sawatch Range.

Davis’ team found that the winter of 2018 was warmer and drier than winter 2017. And the spruce beetles were into that.

“We saw an earlier emergence and earlier flight activity across the entire region when the winter was warmer and drier. So you saw beetles flying earlier and it went on for longer,” Davis said.

Spruce beetles usually strike during a six-week period. They emerge, fly, select trees as their hosts and colonize them. But the warmer weather means the beetles could reemerge and repeat the cycle twice in a year.

Once Davis and the CSU team had a model from their research, they were able to use climate change projections to see what beetle outbreaks could happen in the future. The study found more and more reemergences as the weather continues to warm up.

“The question is really whether or not the forest will recover in the same way after,” he said.

The climate change that is spurring changes to the spruce beetle population could also affect the vegetation that returns to the areas decimated by their activity, Davis said.

“So what once was a spruce forest may become repopulated with a pine species that would have been at a lower elevation 50 years ago,” he said.

An unexpected winner in this new kind of forest recovery? Bees. As the beetles kill off the canopy of forests, more light hits the forest floor, allowing more flowering plants to grow where it otherwise would’ve been too dark. And where flowers go, bees follow.

“This is one of the silver linings,” Davis said. “It does look like, at least with the first few years of data, that we're seeing an increase … flowering plants, and an increase in bee abundances in these areas that have been disturbed by bark beetles. So all things considered, these disturbances may be good for bee populations.”

Ultimately, Davis sees the shifting makeup of Colorado’s spruce fir forests as a story with winners and losers, and one that’s not as human-centric as we may want it to be.

“I think the common tendency is for people to see tree mortality or changes on the landscape and assume that this must have some negative consequence. But that's really this anthropocentric view, right? ‘The forest is sick and we need to do something about it,’” Davis said. “It really just depends on the disturbance and the location.”