Skip to Content
Need help?
Donate
Panels I Attended: Jarvis Cocker: The Meaning of Artistic Vision , Sean Combs: The Interview
Bands I Watched: Tennis, Little Fyodor, St. Vincent, Damon Albarn, Wanda Jackson
Best New Music Discovery: I saw bands I know today, but I turned a couple from Madison onto PHOX (who are also from Wisconsin)
Best Food: Tofu wrap at the Convention Center
My day started and ended with "Teenage Alisha would think adult Alisha is SOOO cool" moments. I was living out my Britpop crushes on Jarvis Cocker (Pulp) and Damon Albarn (Blur) during their SXSW appearances. 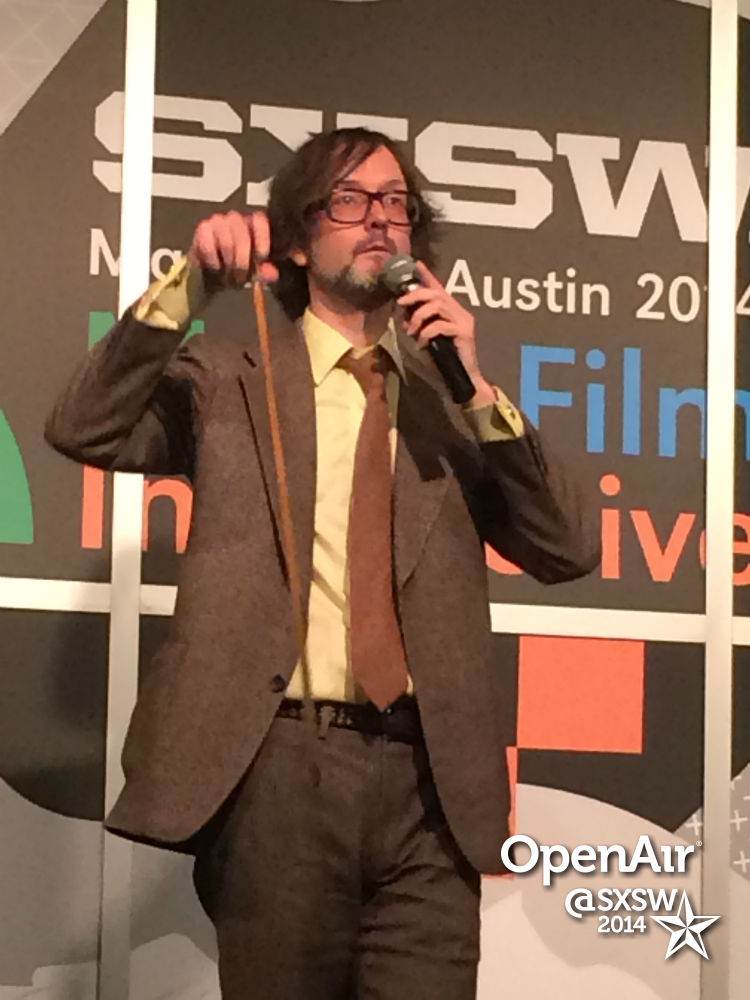 (Photo: CPR / OpenAir)I arrived early at the Jarvis Cocker panel and got a seat in the second row. I've always loved Cocker's voice, so I probably could have just closed my eyes and enjoyed him speaking, but I took in the moment noticing he looked dapper as usual, wearing a brown tweed suit and matching tie, canary yellow shirt and cufflinks. His iconic glasses while still large have shrunk a little in size and his hair has greyed a bit and it was unkempt. He set the tone with a comical jab at how he created his rockstar look when he was getting started in the eighties. He wore: Elvis Costello glasses, Ian McCulloch hair, Hugh Cornwell beard/stubble.
The panel also included him playing clips of music that inspired him early on, he read short stories from a book he's written and showed visuals of locations that influenced his songwriting process from some of Pulp's songs. His whole thesis was to take notice of what's around you and make it interesting. And that maybe your everyday, mundane experiences will allow you to make observations on who you are, "if you want to create 'Extraordinary' you first gotta create 'Extra Ordinary.'"

After this since I was at the Convention Center, I sat through Sean Combs' featured interview while waiting to see Tennis perform (which BTW, it was rumored that Jarvis Cocker popped into the show for a bit!). The panel felt like a big promotion for some new MTV-like station that he's doing, but also at the same time, I found him interesting. The crowd was full of Millennials and Gen-Xers eager to be inspired by him--at times, I too was getting riled up. He's been coming to SXSW for a few years now because he said he's a huge new music fan and he likes being around others who are like-minded. On creating, he simply said "don't sugarcoat your art, just remain true to it and put it out there" and "make it dope." 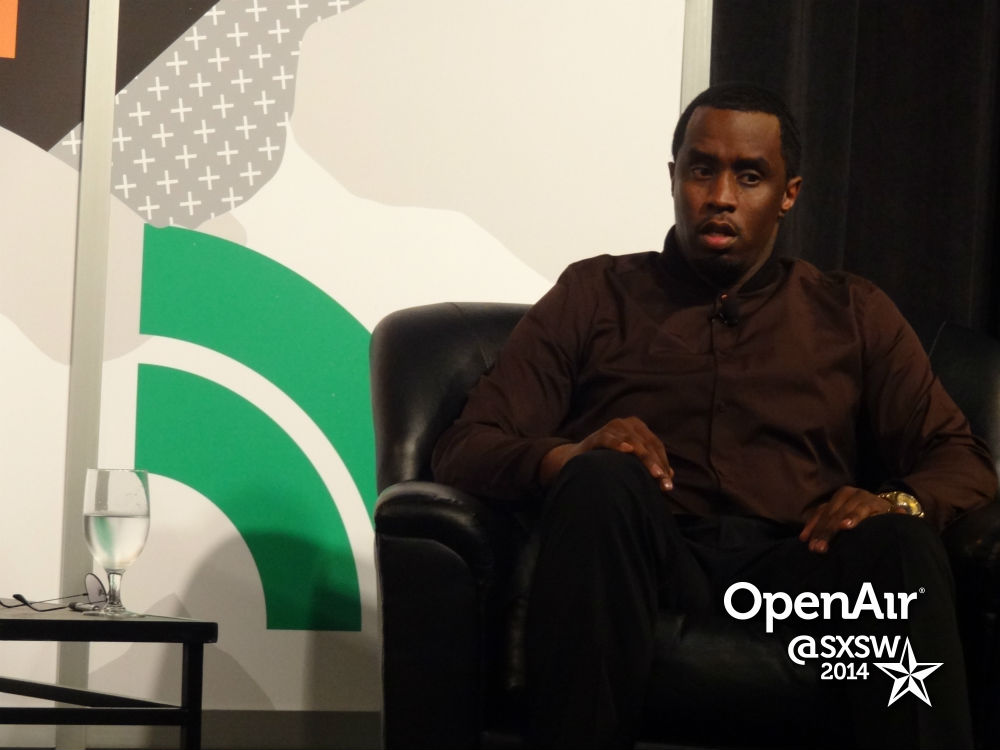 (Photo: CPR / OpenAir)Biggie fans will appreciate that when he was asked what he thought his old friend would be doing now if he was still alive, he said that they probably would have gone into business together, and also that musically Biggie would have crossed over into R&B. Combs also teased that he plans to release a recording he has of Biggie doing a Jodeci song!

My evening took me to hanging with some radio contacts off the beaten path, then meeting up with some friends to see the bats fly under Congress Bridge at sundown. We made it to local band Little Fyodor's official SXSW show and the crowd seemed enjoy their music. They are also very visually fun to watch so people who were walking by would stop to take pictures of them through the window.

Eventually I made my way to see St. Vincent but made a pit stop to hear the Queen of Rockabilly talk about dating Elvis and cover a song of his. She's still got it!

I met the members of the band Diane Coffee (Foxygen side project, we play the record) in line at Stubbs where NPR Music was hosting their big showcase, and am happy to call them new friends. One of their band members also plays for Those Darlins who has been by our performance studio and he said he really liked our station. After 90 minutes in line, we got in and saw St. Vincent and Damon Albarn.

There's always been something magic about Annie Clark of St. Vincent and tonight she cast a spell on me. Years ago, I obsessed over her debut album and saw her at Hi-Dive and now a lot has changed since 2007. She is a full blown superstar to me, a magical, statuesque music icon. The stage show of choreographed performance art, along with her talented band, and perfect set list created a memorable night onstage. Even though she is so original and a wonderful artist, I do see some influences from David Byrne in her stage show that make me think her collaboration with him is what brought on this new wave of her career. 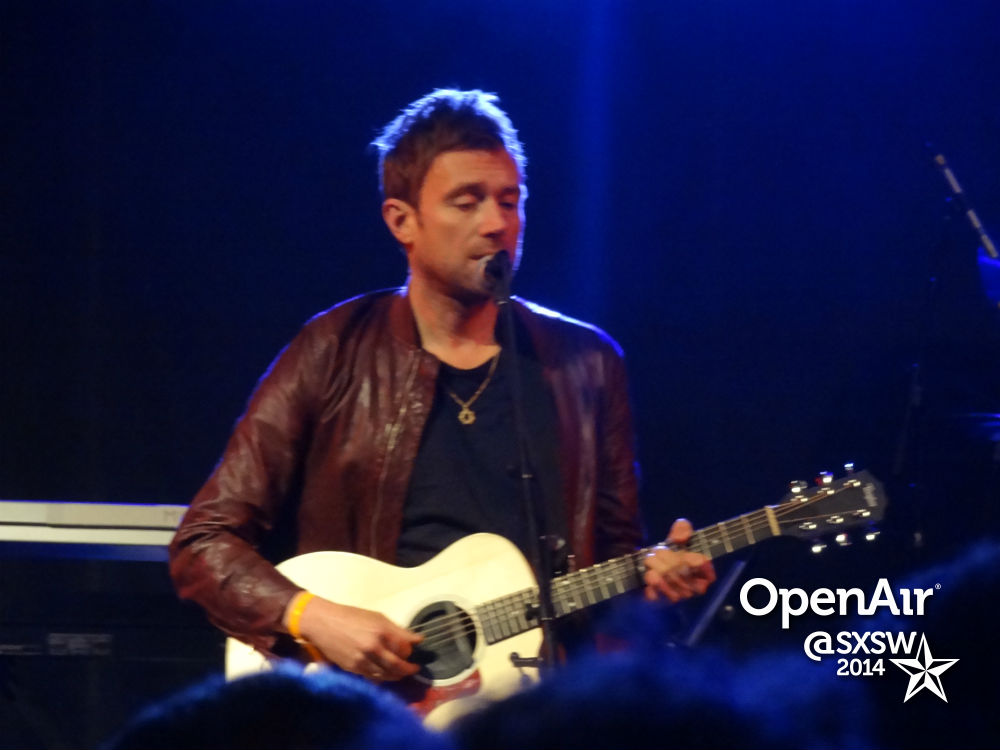 (Photo: CPR / OpenAir)Damon Albarn was the headliner and unfortunately the crowd was growing restless because it was taking so long to switch out the stage (and sadly I think the reason had to do a little with the horrific accident that night---it happened right across the street, although I think most of us in the audience had no clue; I didn't). The Blur/Gorillaz mastermind didn't disappoint with his new songs mixed with a few from his other music projects. During the final song of the evening, he brought out a gospel choir to sing with him. Albarn was a wonderful performer, he played guitar, piano, melodica... it was dreamy and the cherry on the top of my wonderful day in Austin and definitely "Teenage Alisha Approved!"