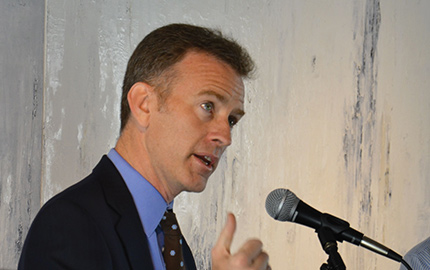 During the third event in our “CPR on Santa Fe” series, CPR News’ Mike Lamp sat down with NPR “Morning Edition” host Steve Inskeep to share what it’s like to produce a bi-coastal radio program that’s part of the everyday routine of millions of Americans.

Inskeep and Lamp explained how "Morning Edition" comes together, detailing the number of people it takes to produce the show and the level of collaboration required to bring listeners stories with local, national and global points of view. Inskeep also spoke about the power of radio as a medium to connect people. “I’m in a studio in Washington D.C., she [co-host Renee Montagne] is in L.A. and Mike is here in Colorado, but we’re all in your car. We get the privilege of being wherever you are.”

While the audience enjoyed a peek behind the curtain of “Morning Edition,” they also learned about Inskeep's recent experiences in the field to produce a new series, “Borderland: A Journey Along The Changing Frontier,” which chronicles stories captured along the U.S./ Mexico border, including some of the surprising ways the two neighboring nations influence one another.

See photos from the trip at NPR's On the Road blog and listen to "Morning Edition" throughout the week for updated stories in the "Borderland" series.