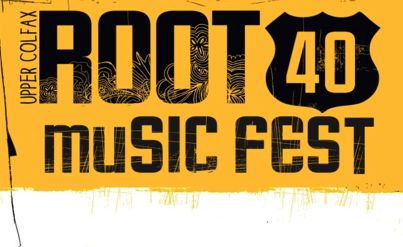 Prior to the festival, we spoke with Root 40 Event Manager Melanie King to discuss the motivation for the fest, Colfax's cultural atmosphere, and the vitality of Colorado's local music scene.

OPENAIR: Take us through the history of Root 40 Music Festival. How and why did it come about, and how did it get to its current embodiment as a week-long event?

Melanie King: Root 40 is now in its third year. It was formed by the Upper Colfax Community Foundation, a nonprofit arm of the Colfax Business Improvement District. The purpose of the fest is to draw attention and awareness to the local businesses on Denver’s Upper Colfax region, the two-mile stretch between the Capitol building to East High School.

That particular section has a strong rich musical history as it was Denver’s original main street. A lot of amazing musicians have come from East High and the surrounding area. It features venues like the Ogden Theatre and the Fillmore Auditorium. Musicians like Bob Dylan used to hang out at Colfax bars like the Satire. We aim to draw attention to all this. The festival is really about celebrating local music, the business of making music, and those Upper Colfax businesses.

What makes Upper Colfax such a cultural hub in Denver?

Colfax has such a strong varied history. I’ve done research about why its so concentrated there. In the entire state of Colorado, Upper Colfax is the most populated square mile: there are 55,000 people there. I think that saturation alone causes interesting things to happen. Additionally, there are the most entrepreneurs per capita in Colorado right in that section. With that phenomenon, you know amazing things are going to happen there.

The fest features speakers who will tackle topics ranging from music law, festival organization, and record labels. What might local musicians hope to take away from attending these panels and networking events?

What I’ve found is that anybody who is in the music industry can learn so much just by listening to the Q&As and attending the meet and greets with people who have harbored such great success like Kevin Lyman with the Van’s Warped Tour. I think there’s a lot they can take away not just in what can advance their own personal careers, but also by figuring out how they can help others. A lot of people who come to these events are musicians, but they are also people who care for musicians as well: managers, promoters, etc. So, the interaction at these events can help the scene on a wide base.

The festival is not geared solely for musicians and industry folks. What events during the week do you recommend for the general public?

The last half of the week is the live music portion, with concerts happening in and out of the Colfax venues. We have a large outdoor day party at Argonaut Liquor on Saturday, April 26 from 1-5 p.m. There will be a huge stage with all headlining acts, along with vendors, fashion trucks, and food trucks. Then that launches into Saturday night where people will be enjoying music in the venues.

How are Colorado musicians represented in the festival’s live performance aspect?

Sunday at the Fillmore Auditorium there is a wrap party and music business expo that is open to the public with free mimosas and Voodoo Doughnuts. On a side note, Voodoo is making a special Root 40 doughnut for us over the week: the Blunt Doughnut, a light and fluffy doughnut dipped in chocolate with sprinkles and a cinnamon and cayenne sugar coat.

As far as local musician slots for the performances, we got over 200 musician applications for only 55 slots, so it was hard to choose with so much local talent. The Other Black will be at the Fillmore along with The Outfit, Alterity, and Ancient Elk. Wheelchair Sports Camp will be playing our official afterparty. There are national acts but were really focusing on the local showing. And theres a wide range of styles: blues, rock, reggae, country, everything is covered.

Colorado Music Hall of Famer Chris Daniels shows up on the fest's program. What role has he played in Root 40's history?

He’s been involved every year with the festival. Along with the College of Arts and Media on campus, Chris has been a great partner to have especially with getting the industry panels and presentations lined up. He’ll be moderating on our launch night at the Sie Film Center, and the panels on campus as well. There will be some local industry professionals helping out as well, including Andy Guerrero from Flobots and Virgil Dickerson of Illegal Pete’s and Greater Than Collective.

The festival includes live music at an outdoor stage at East High School on Friday afternoon. Are these East High students performing?

It’s a combination: the first few acts will be East High students, and the others are youth musicians represented by local nonprofit Mile High Scenesters. They help young musicians learn to become professional musicians by giving them stage opportunities to get the feel of how to set up and play in a live setting. It also promotes the East High arts walk.

Part of Root 40 is giving back to the community of Colfax. This East High stage acts as a direct donation point for the East High arts and music program. Funding for those programs gets cut too quickly these days. The other aspect is that it is Colfax Avenue, and there are a lot of struggling people in the community. To help out, there’s a food drive throughout the festival. We’ll have drop boxes for non-perishable items which go towards DenUM: Denver Urban Ministries.