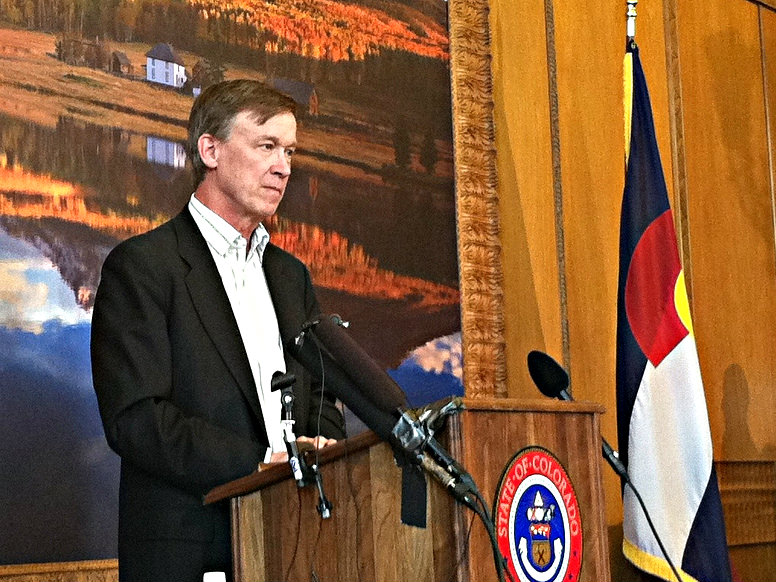 (Megan Verlee/CPR News)Governor John Hickenlooper did nothing wrong when he had staffers in his office prepare policy briefings ahead of last summer's Democratic Governors Conference (DGC) in Aspen. That was the finding of Colorado's Independent Ethics Commission (IEC) Monday.

Compass Colorado alleged that Hickenlooper's involvement with the conference violated state ethics rules in two ways. First, conference organizers gave the governor and his staff their hotel rooms, meals and registration fees for free.  That added up to a value far in excess of the $53 gift Colorado officials are allowed to accept. And secondly, taxpayer-funded staff in the governor's office spent about five hours putting together a briefing book of relevant policy information for the governor to use at the highly-partisan event.

Compass Colorado Attorney Geoff Blue told the commission that state rules do not “distinguish between staff time and a check” when it comes to using public resources to further a partisan cause.

Commissioners, however, saw the governor's actions differently and ruled that the benefits the DGA got from having Hickenlooper help organize and host the conference outweighed the freebies he received.

And commissioners agreed with the argument made by Hickenlooper's attorney Jack Finlaw who says that even at partisan events, it benefits Colorado to have the governor remain well-informed and able to advocate for the state's interests, so the staff briefing time was not inappropriate.

“The governor needs to be able to articulate his policy goals, whether he is addressing sycophants or skeptics,” Commissioner William Leone says.

Commissioner Matt Smith, a former lawmaker from Mesa County, was the only dissenter to Monday's vote. Smith says he wanted more information that shows exactly how much staff time was used to prepare the briefings and what the value was in terms of salary.

Ruling raises questions about past complaint

News that the ethics commission had dismissed the complaint against the governor was met with immediate protest from Secretary of State Scott Gessler, one of the Republicans vying to challenge Hickenlooper this November.

Last year, the IEC found that Gessler had violated the public trust by using his office's discretionary fund to pay for travel to the 2012 Republican Lawyers Association convention in Florida because the gathering had an explicitly partisan goal. Gessler did earn continuing education legal credits at the convention but he isn't required to maintain his law license as Secretary of State.

"Unfortunately today’s [Monday] decision will have a chilling effect on Republican public officials and public servants, who now know that Hickenlooper plays by a different set of rules," Gessler said in a statement.