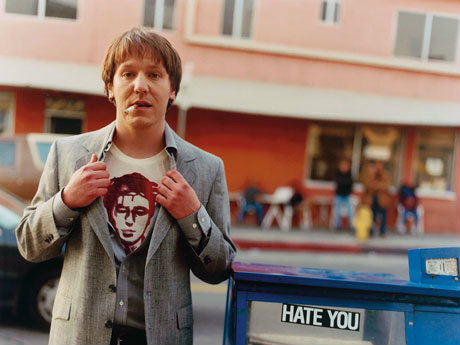 (Photo: Autumn De Wilde/courtesy of the artist)Next week marks the premiere of the Elliott Smith documentary "Heaven Adores You" at the San Francisco International Film Festival. It arrives 11 years after the singer-songwriter's untimely death, and is the first project of its kind to gain permission to use Smith's music, a catalog that features some of the most genuinely heartfelt, gloomy and captivating indie music of the last 30 years.

Smith's legacy and fan base continues to grow exponentially over a decade since his passing at age 34. Sure, he gained plenty of recognition in his own lifetime from fellow artists, fans of alternative music and even the Academy of Motion Picture Arts & Sciences when he garnered an Oscar nomination for Best Song for "Miss Misery," his his contribution to the 1997 film "Good Will Hunting" (he lost to Celine Dion). But the allure of songs like "Ballad of Big Nothing" and "Needle in the Hay" are timeless in their direct confrontation with the sadness or confusion that can at times overwhelm us, and that consumed Smith in his art and life.

The lesson of Smith's music, however, is in bravery. Young people flock to his music not to feel depressed, but rather invigorated. He taught us that caring too much is always better than not caring at all. Smith struggled until the very end, but he left behind singularly beautiful songs that become favorites to new ears with each passing year.

Here are a few artists whose music carries on the confessional and emotive precedent that Smith, who was in turn following the footsteps of greats like Nick Drake and Joni Mitchell, established in his brief life and career. Listen to a track from each artist and listen to the full playlist below.

Marissa Nadler's voice is as angelic as Smith's, though it's been described as one "you would follow straight into Hades." Her music is far too pleasing to function as the soundtrack to the Underworld, but despair and finality are certainly not foreign subjects to the Boston singer-songwriter. Featuring twinges of country, folk and even metal (she has collaborated with acts like Xasthur and Locrian), Nadler's songs play out her shyness as a virtue rather than a crux, and her self-exploratory catalog gets better and better with each new record.

South African-born and currently Colorado-based musician Gregory Alan Isakov rarely hits the emotional lows of "Between the Bars" in his own music, but it undoubtedly matches its ecstatic highs. Isakov's recent records maintain his folk beginnings and propel them with chamber-pop and indie rock accompaniments that ease into his generous knack for melody and song structure; much like Smith effectively expanded his sound on later albums.

Atmosphere is an important touchstone in Elliott Smith's music: his raw falsetto often sat perfectly in the mix with fingerpicked guitar to sound unmistakably intimate. This emotional effect is taken to soaring heights in the music Liz Harris creates as Grouper. Each element in the recording process, be it the buzz of microphones, Harris' gorgeously reverberated vocals, or simply the pregnant pauses of silence all coalesce to provide the comforting ambiance of a bedroom. Lyrics are often indistinguishable, but the heaviness of Harris' words is abundant in her vocal delivery.

The life of singer and multi-instrumentalist Mark Linkous ended tragically as well. Linkous took his own life on March 6, 2010, but not before leaving behind five fascinating albums as Sparklehorse, an act that boasted collaborations with Tom Waits, PJ Harvey, Danger Mouse and David Lynch in its 15 year existence. Like Smith, Linkous towed the line between the extremities of anger and sorrow in his music, sounding bitterly harsh at one moment and painfully desolate the next (check out the stark transition between the first two songs of standout album "Good Morning Spider").

Portland singer-songwriter Alela Diane's music preserves a heartbreaking experience or series of events in a vacuum for future listens. Her most recent album, 2013's "About Farewell," is an emotional comtemplation of her recent divorce that ranges from bitterness to resignation to acceptance. The confessional nature of her music certainly seems to take a page from Smith's.