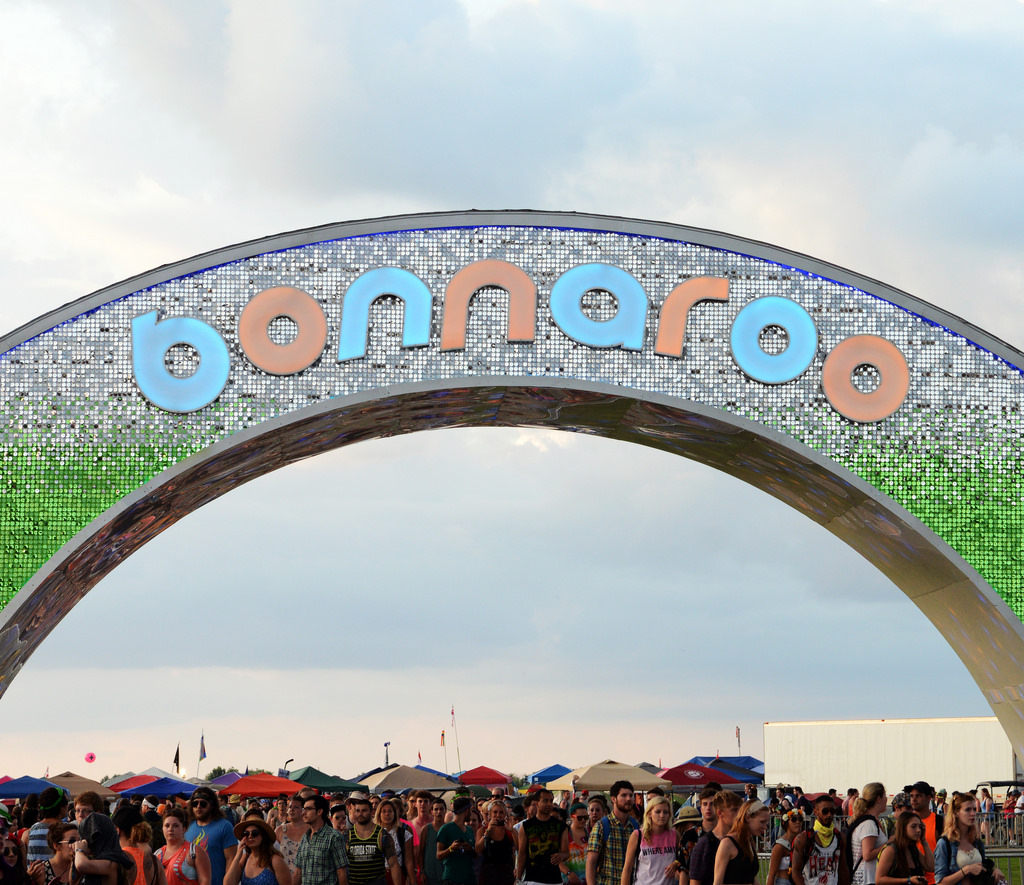 (Photo: Josh Rhinehart/ Mason Jar Media)Bonnaroo 2014, to my understanding, is about trying something new.

On Thursday evening, the first day of the 13th Bonnaroo festival, I found myself describing the bands about to play four separate times to people who had no idea what kind of music they were about to experience. They had just wandered headfirst into the substantial crowds for an act they had never heard of, eager just to take in the experience.

Or take the guy I sat next to on the bus, who traveled from Vancouver without any real comprehension of this year’s lineup. He had simply enjoyed going the previous year, and that was enough to make the international trek once more.

It’s a problem for radio folks that it's often difficult to sample something truly “new” at these events. Our careers require us to be familiar with more acts than the average festivalgoer, and more often than not we don’t have time to check out those we don’t know, because those we do know take precedence.

Nevertheless, the sentiment of embracing novelty rubbed off on me. It’s contagious, choosing to break your schedule, or not making one in the first place.

I had only briefly taste-tasted Wilson’s music before I showed up yesterday morning. His latest album “Fanfare” is pleasant, but seemed a little too ambient to translate live. The Los Angeles music vet stuck to jammy psychedelic numbers that kept the early birds enthused for the upcoming four days and nights of music, and even incorporated a few “Fanfare” numbers that proved me wrong.

I’m an unabashed McCombs fanboy, so imagine my disappointment when he canceled his Denver show last November. Luckily, Bonnaroo proved an apt setting for my first live experience with the enigmatic singer-songwriter, who donned a shirt reading “Prisoners’ Right to Vote.” A moderate layer of fog added a mystique to a musician who certainly isn’t short on it, and his non-existent stage banter only drove that point home. His set stuck mostly to songs from last year’s great “Big Wheel & Others” record, though he boldly played “County Line,” a slow country dirge, early in the set. Its tempo drove out a few individuals, but it’s his finest song (and the most played in my iTunes library by far) and fans would have been slighted by its absence. 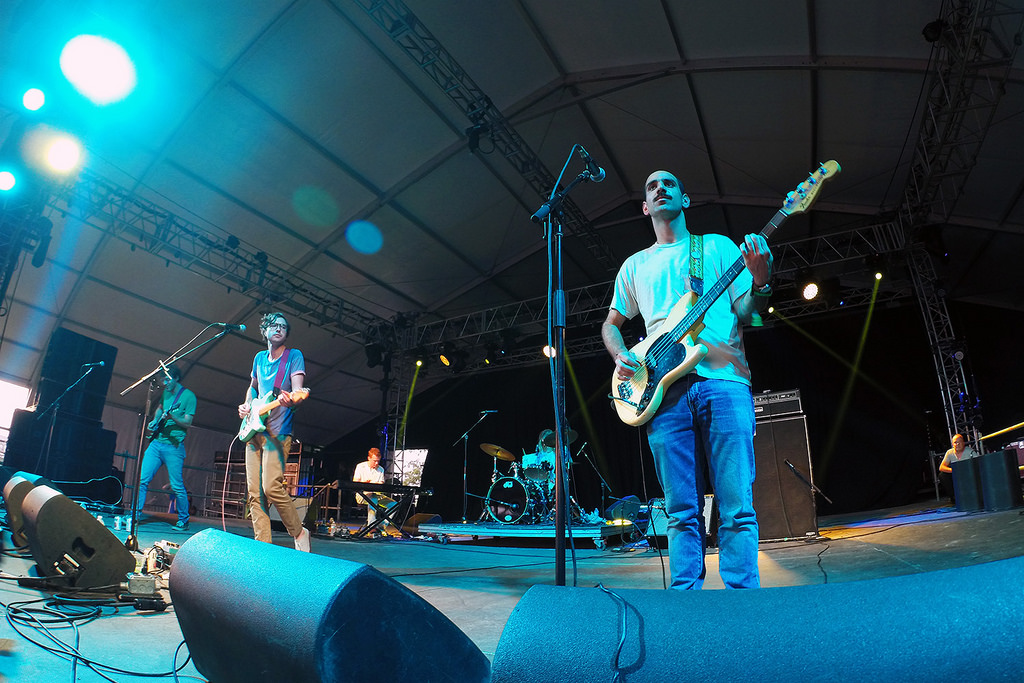 Real Estate’s enthusiasm wasn’t always apparent in their collected indie rock, but they made no effort to conceal it in between songs. “It’s my first time at Bonnaroo!” shouted bass player Alex Bleeker to the largest crowd of the festival yet. I was taken by the band’s ability to replicate their pristine guitar tones in a notoriously difficult festival setting. Over three albums, Real Estate have crafted enough quality songs (the opening four alone “Beach Comber,” “Had to Hear,” “It’s Real,” and “Crime” are a vertiable Real Estate greatest hits), so they can easily fill an hour set with no real lulls. That bodes well for their upcoming headlining experience at Denver’s UMS in July.

Cleveland trio Cloud Nothings were the first nighttime act I witnessed, and the bad (read: fun) behavior came out in full force. I estimate at least 25 crowdsurfers, three attempted mosh pits, and about 12 energetic songs from the band’s two albums. The melodic punk that Cloud Nothings craft might seem the type that’s fun for a month or so then disposable, but revisiting tunes like “Stay Useless” and “No Future/No Past” demonstrated the staying power of these emotional outbursts. 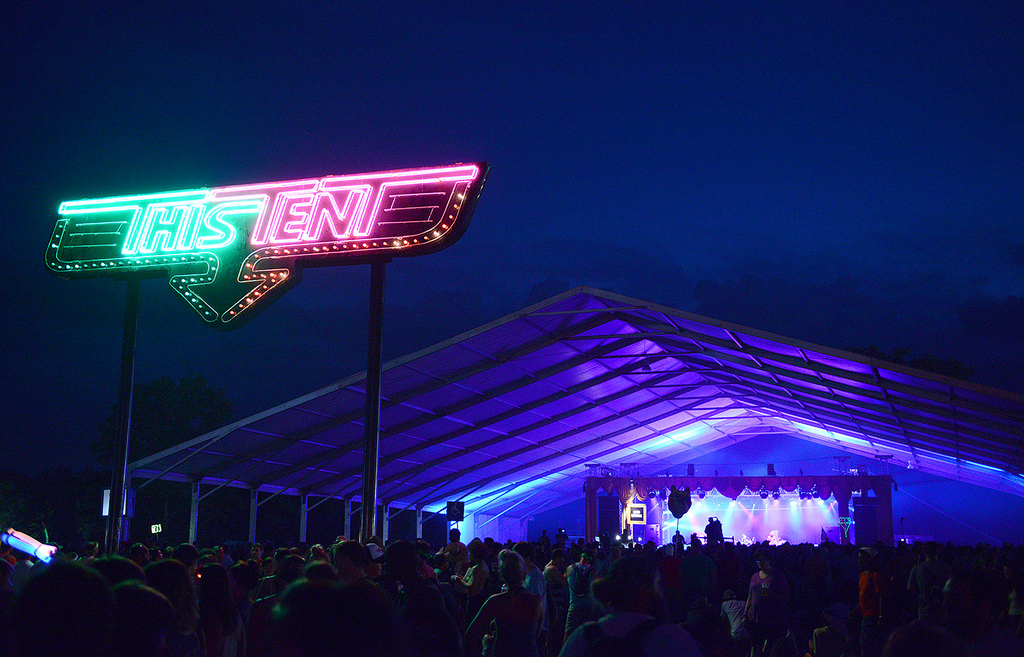 One of the other acts I took in without any substantial knowledge of her music. I first heard Banks on KCRW’s excellent Metropolis program, a show which host Jason Bentley devotes primarily to electronica. Banks, however, might not fit plainly in that category, instead blurring the line between pop, R&B, indie, and yes, electronica. The singer moved about the stage with nervous energy, which she later contextualized: "This is my first time playing a festival at night!" Songs like "Brain" and "This is What it Feels Like" might prove Banks a rising star, but upon viewing the numbers she brought in, maybe she's already high in the sky.

“They sound Indian,” said the perplexed guy next to me. “I’ve never heard music like this before.” I won’t necessarily take the first comment to heart, but the second was a great takeaway from a first-time Polica listener. The Minneapolis five-piece is a hodgepodge of musical elements ranging from punk to electronica to perhaps even the Eastern music the stranger was trying to get at. Whatever you want to call it, it’s singular and delightfully weird. I was curious how successfully Channy Leaneagh’s typically distorted, shifted, and otherwise tinkered vocals would play out live. Surprisingly, much of those effects were toned down, leaving Leaneagh’s superb vocals largely untouched as she threw out towels to the audience. On a bill with plenty of dance music, Polica might prove to be the best disco band of the fest.