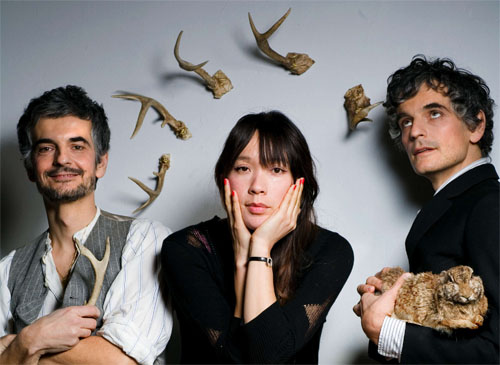 Initially, the band’s music was heavily influenced by noise and fuzz rock. The band famously used Teisco guitars for their unique tones and customizability. With a rotating cast of bassists to accompany the Pace twins and vocalist Kazu Makino, Blonde Redhead’s sound has evolved and matured throughout over two decades.

The band’s early albums have a heavy punk attitude. The sound is abrasive and somewhat inaccessible, but there is some real genius within. Seemingly out of tune guitars and distorted vocals swarm together over a driving drum beat. Then a sweet, innocent female voice comes over the noise for a sense of contrast while the music slowly becomes more organized.

Blonde Redhead invited Guy Picciotto of Fugazi to produce their fourth album, "In an Expression of the Unexpressable." From the first notes of the first song "Luv Machine," you can tell that the band was maturing. A somewhat off tempo of syncopated guitar strumming combined with a flowing drumbeat and high pitched vocals starts right out of the gate.

With some prog influences, the song continues to add some dreamy synth tones, sounding like a harpsichord.

The group began incorporating more electronic elements into its music as it developed a dream-pop sound. This is first apparent from the music of 2004's "Misery is a Butterfly."

With the critical success of that record, Blonde Redhead was clearly growing. By incorporating strings, the sound was becoming polished, particularly compared to earlier work.

On September 2, the band will release their ninth studio album "Barragán," its first since 2010's "Penny Sparkle." They have released a few tracks off of the album. The sound is more electronic and ethereal. There is a lot of space in the tracks, reminding me somewhat of downtempo artists Four Tet, but with some Cure or Depeche Mode influences.

Make sure you catch Blonde Redhead at the UMS Main Stage on Sunday, July 27 at 8:30 p.m. There is a reason this band is one of the premier headliners: you don’t want to miss them!

The Denver Post UMS runs from July 24-27 in Denver's Baker district. Tickets and a full schedule are available via the UMS website.