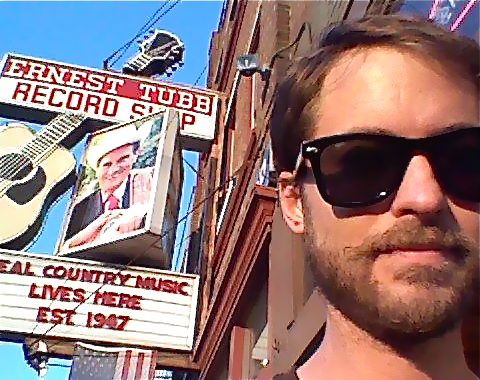 (Photo: Courtesy of Adam Baumeister)In the digital age, musicians typically get as many takes as they need to lay down a track.

But instrumentalists and singers interested in experimenting with Denver guitarist Adam Baumeister's straight-to-vinyl recording booth at the Underground Music Showcase (UMS) this weekend will be reminded of the days when musicians only had one shot to get it right.

Imitating the popular recording booths of the 1950s, Baumeister will set up a small studio in the back of Ironwood boutique store on South Broadway during the annual indie rock music event. And for $25, anyone can come in and record a song -- or whatever they like -- straight onto a seven-inch vinyl disc.

“It puts some pressure on and it makes people perform more,” Baumeister, who cut 25 records when he debuted his booth at last year’s UMS, says. “Every musician last year nailed it. When you play live, you’re not going to stop the song when you mess up. You just keep going. It’s a different frame of mind.”

When these booths were in fashion, owning a recording of your voice was a luxury.

But today’s technology allows anyone with a smartphone to record an album at home or stream music through an online service like Spotify or Pandora.

The ease and relatively low cost of music-making and consuming have caused a recent revival in throwback recording and listening media throughout the western world.

“We’ve had two generations that have lived with digital music, and the emptiness of that has started to sink in,” Twist & Shout record store owner Paul Epstein says. Epstein’s Denver outlet boasts 250,000 LPs. “It’s a lack of ownership and physical connection to your cultural leanings.”

According to Nielsen Entertainment & Billboard’s 2014 Mid-Year Music Industry Report, sales of vinyl records are up 40% this year, compared to July 2013.

Epstein has seen this trend steadily rise since 2004, when vinyl sales made up only 5% of his business, which also includes DVD’s, posters and other merchandise. The record store owner now estimates vinyl to make up around 40% of his total sales.

“For years it was only dance DJ’s and jazz collector die-hards that would buy vinyl,” Epstein says. “Then it was the indie-hipster types. Now it’s everything. When teenage girls are buying turntables and records, then you know it’s saturated the public consciousness.”

In addition to being a musician himself -- formerly of the celebrated Denver band Bad Weather California, and currently performing with songwriter Esme Patterson -- Baumeister is also the founder of Meep Records, a small company that presses LP’s and seven-inch singles for musicians.

O'Dougherty says that Ian Cooke sells music on vinyl, CD and digital formats in roughly equal measure, a sales profile which is unusual in today's digital-centric world. He also says that he likes vinyl best of all the media he works in.

"I prefer vinyl because I dislike heavily compressed audio," O'Dougherty says. "Putting a needle on a record is a really physical thing. You can hear the music without any amplification at all."

But O'Dougherty says that while vinyl has become popular again, most consumers are not collecting records to listen to them; they are collecting them as artistic objects.

"People are buying records as souvenirs rather than for their musical value," O'Dougherty says.

This trend is reflected in Baumeister’s interest in vinyl as conceptual art.

He’s created picture discs of extinct birds to accompany old field-recordings of them. And he's altered a recording by the 19th century German composer Richard Wagner by playing the sound backwards and giving it a few randomly placed “locked-grooves” -- forcing the record to skip infinitely beneath the needle. He's also created records in different colors, geometric shapes and sizes.

In the digital age, Baumeister says, vinyl records are more than just a medium for recordings. They are also pieces of art and history in themselves.

“These booths used to be in small towns everywhere,” Baumeister says. “You could step in and record a song. During World War II it was popular to record messages this way to send to soldiers. It’s a one-time, one performance, one-copy piece of art. That’s the way I like it.”