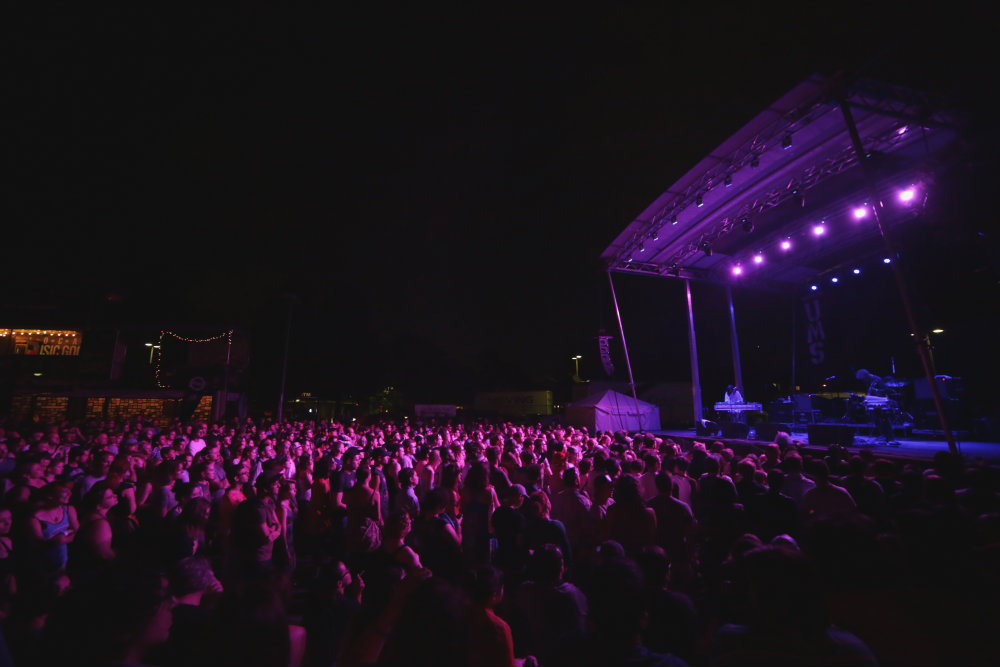 Over a 14-year evolution, UMS has become an indispensable crash course in the Centennial state’s eclectic music offerings. With over 400 acts performing across nearly 20 venues in Denver's Baker district, the 2014 Showcase offered no shortage of live music opportunities, and it's safe to say that no two UMS experiences were alike.

Check out day by day recaps of the UMS weekend along with a photo slideshow below, and head to our Instagram (@OpenAirCPR) site for even more photos.

Keep it in the OpenAir throughout the coming days to hear our sessions with UMS artists like Nathaniel Rateliff, Residual Kid, and more, recorded on-site in the OpenAir RV.

OpenAir’s First Annual UMS Kickoff Party at Illegal Pete’s South Broadway launched the Showcase on Thursday evening. The first musical notes of UMS 2014 came from the cello of Ian Cooke, followed by a solo performance from Lilly Scott (Varlet, Swordsmith) and an acoustic set from Ark Life. Spots of rain, which would follow throughout the weekend, failed to damper the spirits of artist or audience.

Later on, Science Partner, a Colorado supergroup of sorts, channeled the burgeoning UMS excitement into ecstatic indie pop at the Skylark Lounge.

Snake Rattle Rattle Snake has a palpable post-punk atmosphere that fit like a glove inside Hi-Dive. Andrew Warner's expert drum hits summoned the at-capacity crowd's full attention as the Denver band proceeded to twist guitar and keyboard atmospherics together with haunting vocals from Hayley Helmericks.

Friday takes the honors of UMS 2014’s most raucous day.

A boisterous energy permeated South Broadway amidst the rainfall. Tjutjuna opened up the festivities at Hi-Dive with a Kubrickian blend of computer music and post-rock guitar. As glitchy beats and thumping drums propelled into the early crowd, Robert Ballantyne double-tasked on bass and theremin, often simultaneously.

The next hour covered a wide musical spectrum: The Maykit’s Bright Eyes-inspired emo at Irish Rover, Astronautalis’ tough-guy rap banter on the Main Stage, and Covenhoven’s gorgeous full band folk-rock at the South Broadway Christian Church. If you caught the latter, chances are you’ll hold on to your Covenhoven matchbook to commemorate the set.

Tanlines went underway on the Main Stage with intermediate drizzles, but halfway through a perfect double rainbow emerged; it proved a fitting complement to the duo’s colorful electro-pop. “We’ll take credit for that,” they quipped.

Colorado newcomers Eros and the Eschaton took the stage at Hi-Dive with shoegaze-informed guitar rock that should be a welcome addition to the local scene for years to come. Meanwhile, hip-hop duo The People Under the Stairs were ecstatic to return to Denver for the final stop of their tour. As the first of the UMS Main Stage headliners, they proclaimed “it feels good to be Underground.”

A purposefully insane Colfax Speed Queen performance shook 3 Kings Tavern, complete with men in drag, crowd surfing from band and fan alike, and a steady pour of libations into the audience. Later on, The Dirty Few opened up with a cover of Lit’s “My Own Worst Enemy” to launch into another rowdy hour of rock to close out night two.

Saturday brought a more easygoing vibe to the Main Stage with acts like local indie pop group South of France, who confidently opened up the outdoor festivities. The mellow tunes of Gardens & Villa and headliners Real Estate thrived in the breezy weather, though Baths’ set took a turn into electro-pop mayhem in between; perhaps Will Wiesenfeld was goaded on by a wrath towards American Airlines who had lost the his bags on the flight into Denver.

Other highlights included the debut of Lilly Scott’s Swordsmith project, another outlet for the Varlet singer’s powerful, jazzy vocals. Despite the “German” electro-krautrock group’s reputation as an Internet phenomenon, Total Ghost is an act that must be seen to believed. Chön and Biktor, along with “half-monkey, half-man” whipping boy Gunther, enthralled a midnight crowd to the sounds of “Electrosexual” and “President of Tokyo,” comic tunes with serious dance potential. The band's keyboard Matilda got a crowd-surfing session of its own.

On the note of comedy, Adam Cayton-Holland recorded an episode of My Dining Room Table podcast at Adrift Tiki Bar during the day. Accompanied by a prodigious bowl of (literally) fiery beverage, the Denver comedian brought up local music faves like Aaron Collins (A. Tom Collins), In the Whale, and Rob Burleson of SPELLS to chat day jobs, the crossover factor of comedy and music in Colorado, and UMS memories throughout the years (check back with the podcast soon to listen for yourself).

In the Whale didn’t need to provide their early Sunday afternoon Hi-Dive audience with free drinks to get them rowdy, but it certainly didn’t hurt. The Denver duo cured Day Four fatigue with loud, dirty rock during the Reverb Day Party, which the band curated.

Meanwhile, SpokesBUZZ hosted a Colorado-centric day party of their own at the Irish Rover, featuring standout Fort Collins acts like Post Paradise and The Echo Chamber, who closed out with a medley of Eddie Murphy’s “Party All the Time” and Beastie Boys’ “(You Gotta) Fight for Your Right (To Party),” another effective musical pill for UMS hangovers.

Inner Oceans continue to improve and impress as a live force. The quintet quickly overcame some early sound issues at Skylark Lounge to turn out a sharp alt-electro set hinting at great things to come for the Denver band’s proper debut record. Soon after, Prism Waves instilled similarly powerful spacey vibes at Hi-Dive to further represent the experimental side of Colorado.

Youngsters Residual Kid took the Main Stage after smaller gigs earlier in the weekend, though nothing about the trio’s potent guitar rock could be described as young or small. The Men were short a bandmate (unable to fly out of Mexico, according to the three members present) but never slacked for it. Unknown Mortal Orchesta were also only three strong, but the Portland-via-New Zealand band never struggled to get its rocks off.

UMS 2014 might be remembered by some as the American debut of new material from headliners Blonde Redhead, a band that will release its ninth album "Barragán" later this year. The dream-pop trio has long been among the alternative music vanguard; thus the dream-pop trio was a fitting Day Four closer for an event that intentionally spotlights the singular and the bold, that is, the "Underground."

Take a look back at OpenAir's previous UMS 2014 coverage.