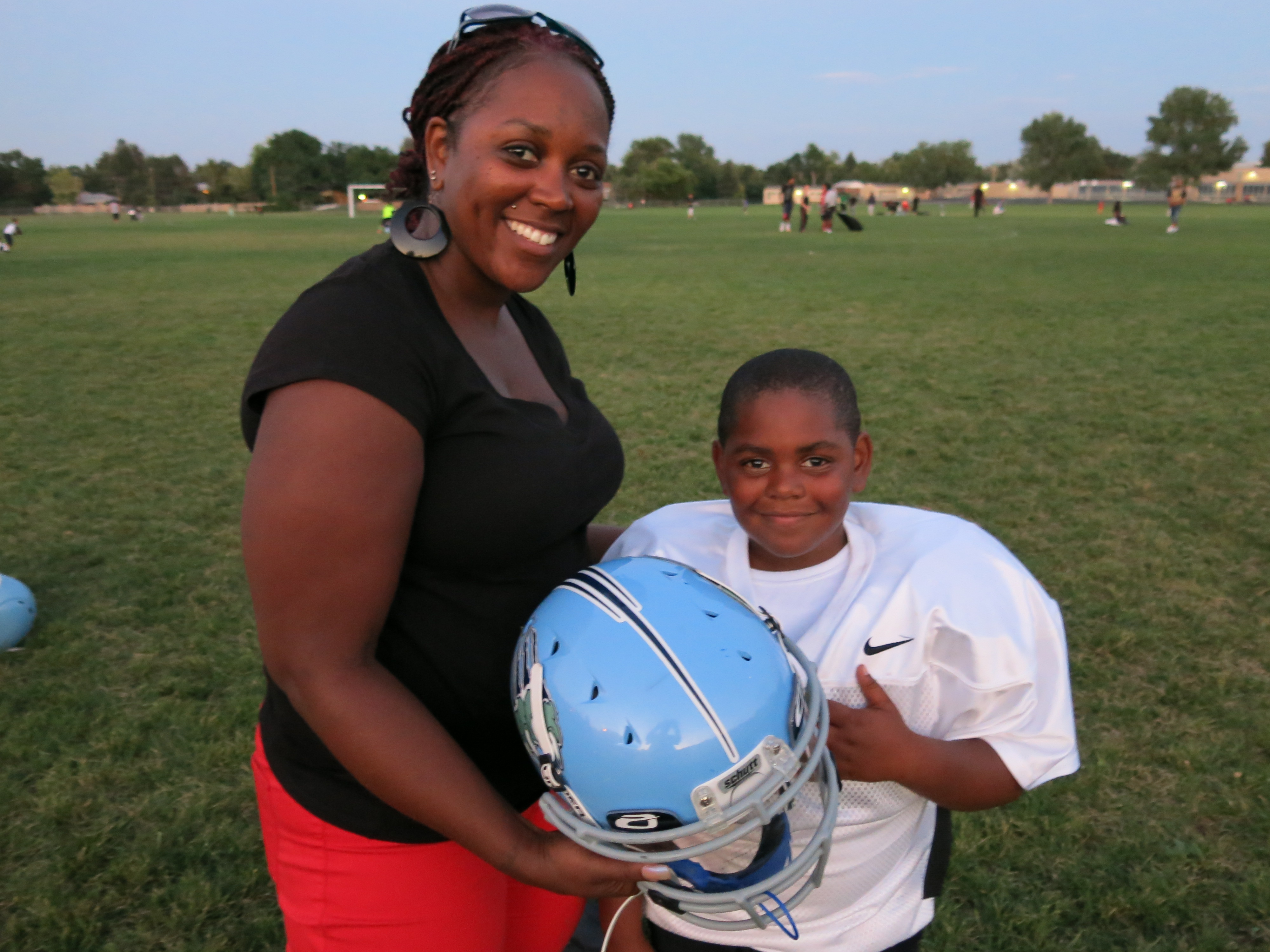 (Photo: CPR/John Daley) On a recent evening, 9-year-old Braylon Powell and his teammates have their pads and light-blue helmets on as they run through drills at a park in Aurora.

Two years ago, as his team, the Cougars, warmed up for a game, “I got hit by the center,” says Powell.  “And my head just started hurting.”

“He couldn’t remember his name,” says LaToya Cook, Powell’s mother. "He couldn’t count three fingers when I put them up in front of him. He was just really out of it.  He was really confused.”

She later realized it was an concussion.  But once Powell started feeling better, he begged his coaches to go back in and after halftime he did. Ever since that game he’s had headaches.

“I just get hit and they just come, sometimes,” says Powell.

“I’m definitely nervous about the hitting and the tackling,” says Cook, “because he will run the ball sometimes which means he is going to get hit -- a lot.” 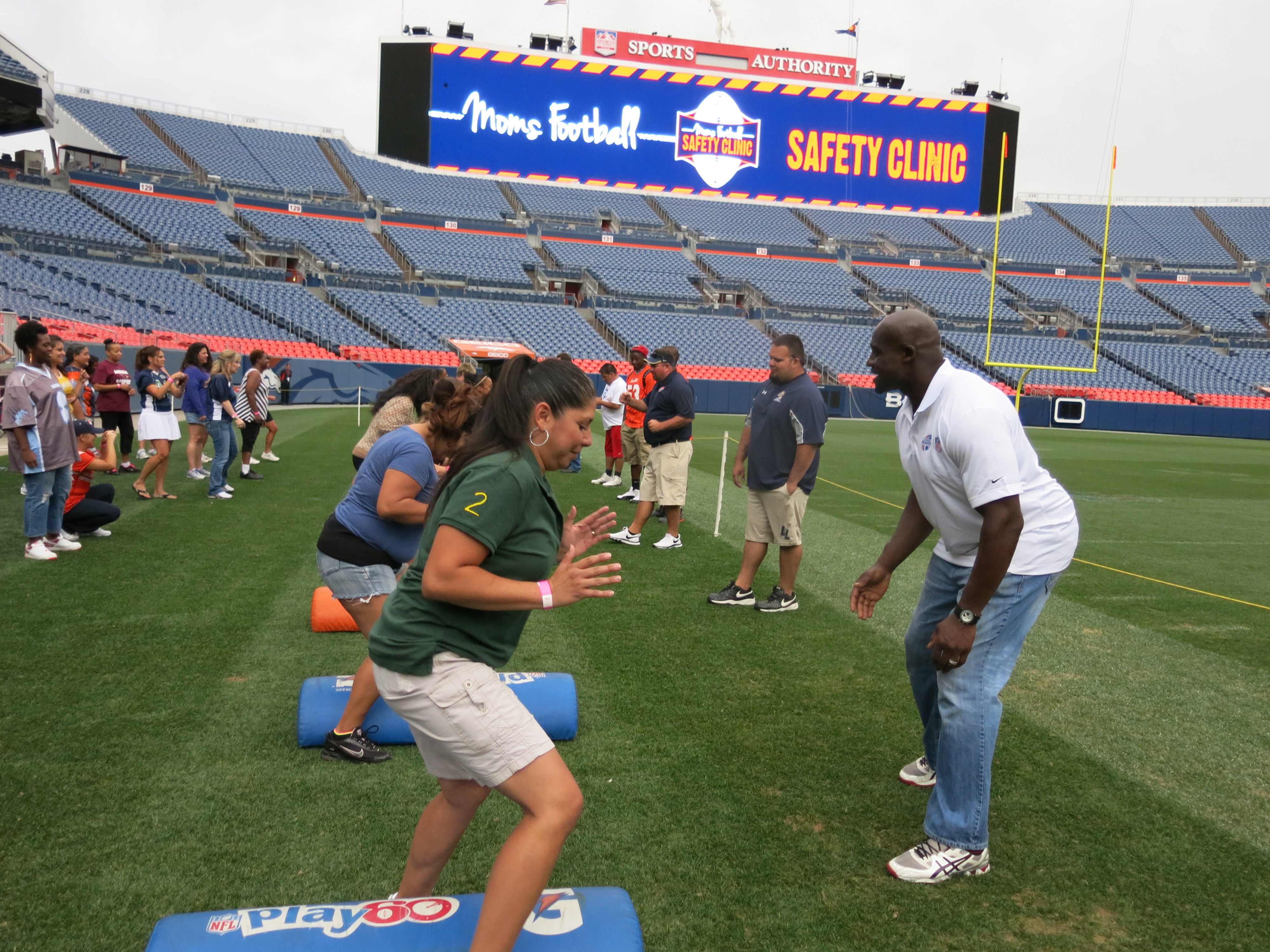 (Photo: CPR/John Daley)Those concerns led Cook to attend a moms safety clinic at the Denver Broncos’ stadium, Sports Authority Field at Mile High.  It was hosted by the team and Heads Up Football, an initiative affiliated with the NFL aimed to make the game safer.

About 200 mothers of young players go through a tackling drill.  The coaches emphasize keeping the head up to avoid injury. Running the drill is Wayne Voorhees, who trains youth coaches about safety.

“You can’t eliminate all injuries,” says Voorhees. “It is a tough sport, but you’re definitely going to eliminate as many as you can.”

The National Football League is under pressure to take a lead in addressing concussions in the sport. More than 4,500 ex-players filed a class action suit against the league, saying it hid the long-term dangers of brain injuries. It resulted in a $765 million settlement last year. This year, a judge removed a cap on damages.  Meanwhile, Broncos’ wide receiver, Wes Welker, has suffered three concussions in the last 10 months.

Parents at the mom’s safety event say they’ve heard of the concussion crisis, but admit confusion about how to identify and treat concussions. Those injuries are much tougher to spot than say, a broken leg. 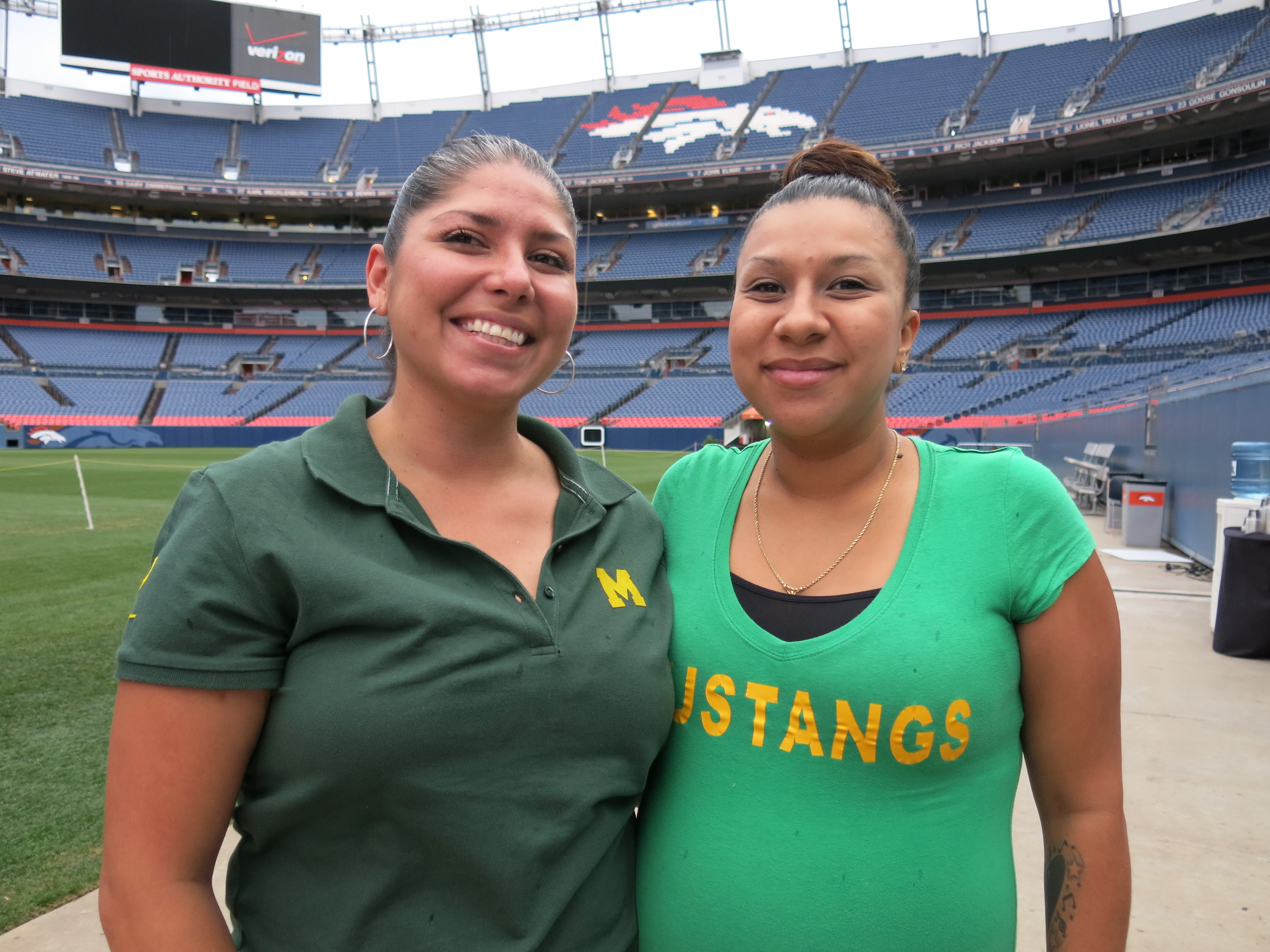 (Photo: CPR/John Daley)Raelene Hernandez is the mom of a seven-year-old in north Denver. When asked if she would let her son continue to play if he were to get a concussion, Hernandez replies “That would probably be up to him. He loves the game ... and he would want to get back up and want to do it again.”

Another mom at the event, Nicole Giron, has two sons who play football. “I’m not as worried maybe as I should be,” says Giron. “I just think with the correct coaching and correct techniques” concussions and injuries can be prevented.

Inside the Broncos’ stadium, moms learn about proper helmet fit, and listen to a presentation from Dr. Sue Kirelik, a concussion specialist. 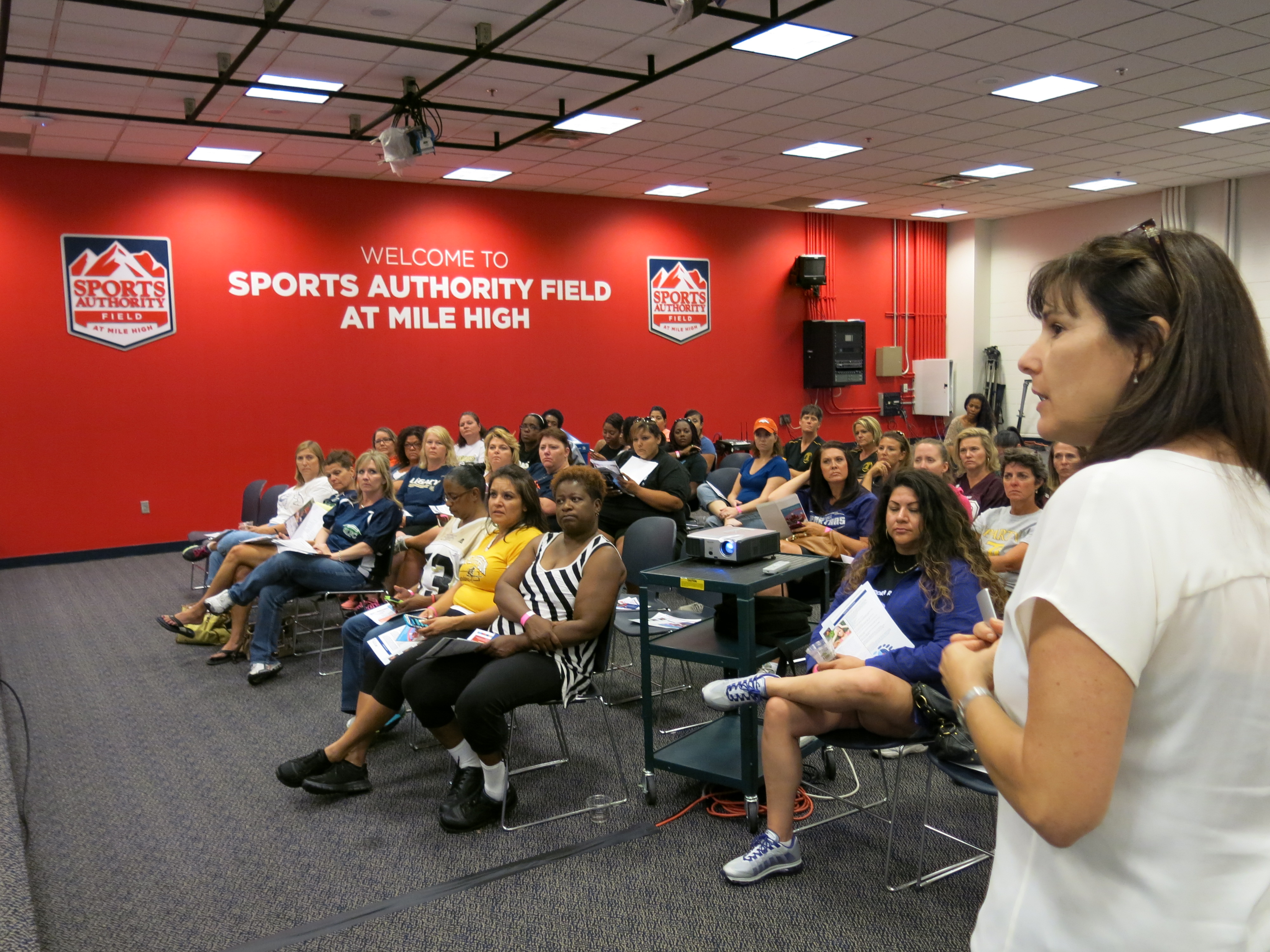 “I think the message to the kid from all adults needs to be keep your brain safe, report symptoms,” says Kirelik. Players need to be taught not to hide symptoms or return to a game or practice if they have potential symptoms like headaches, nausea or dizziness. She says they also need to be taught “you’re not a wimp” if they don't return to the game after getting hit.

Bobby Mestas, the director of youth and high school football for the Denver Broncos, admits “football is a little under fire and there’s a lot of moms and dads who don’t want their kids to play football.”

Mestas says if coaches get proper safety training, and parents get better educated “[football] can still be a safe sport for our kids.”

But one of the league’s toughest critics, Chris Nowinski, the founding executive director of the Sports Legacy Institute, which advocates for research, treatment and prevention of brain injuries, isn’t sold on the mom’s safety program. “This program didn’t exist before there were articles saying that enrollment in football is down,” Nowinski says.

He credits the NFL with trying to educate parents.  But he faults the league for downplaying the many players afflicted with chronic brain injuries and he questions whether the Heads Up program can really make tackling safer.

“This clearly is a marketing program designed to get mothers comfortable with their kids playing football at a very young age against the advice of a lot of doctors,” says Nowinski.

Even John Madden, a Hall of Fame coach with a top-selling video game with his name on it, is raising questions.

In a recent panel discussion on the league’s own channel, NFL Network, Madden said coaches can’t learn techniques taught in the Heads Up Football program in the hour-and-a-half it takes to earn a certificate.

“And all due respect to the program,” said Madden. “I don’t believe in it.”

NFL commissioner Roger Goodell told Madden the program seeks to teach a coach when a player needs to be medically evaluated.

Madden dropped a bombshell in that NFL Network discussion, saying young kids should not play tackle football and can play flag football instead.

“I’m a firm believer that there’s no way that a six-year-old should have a helmet on and learn a tackling drill,” Madden says. “There’s no way. Or a seven-year-old or an eight-year-old. They’re not ready for it.”

Professional football isn't the only sport grappling with concussions. Hockey and college sports are too. Last week in California, a group of young U.S. soccer players and their parents sued three of soccer’s governing bodies. The suit targets the “epidemic of concussion injuries” in soccer worldwide, and aims to limit how many times young players can head the ball.

Braylon Powell’s coach, Myron Jefferson, the president and co-founder of Cougar Youth Sports, backs the Heads Up Football safety program, saying his club’s coaches have received training. "It’s not going to eliminate concussions, but it’s certainly going to help to reduce them,” Jefferson says. “It is really good to get these moms involved.”

Jefferson, who was an all-state running back at Denver South, and played professionally, says concussions are taken more seriously now than when he was growing up in the 70s. “There’s a lot more awareness,” he says. 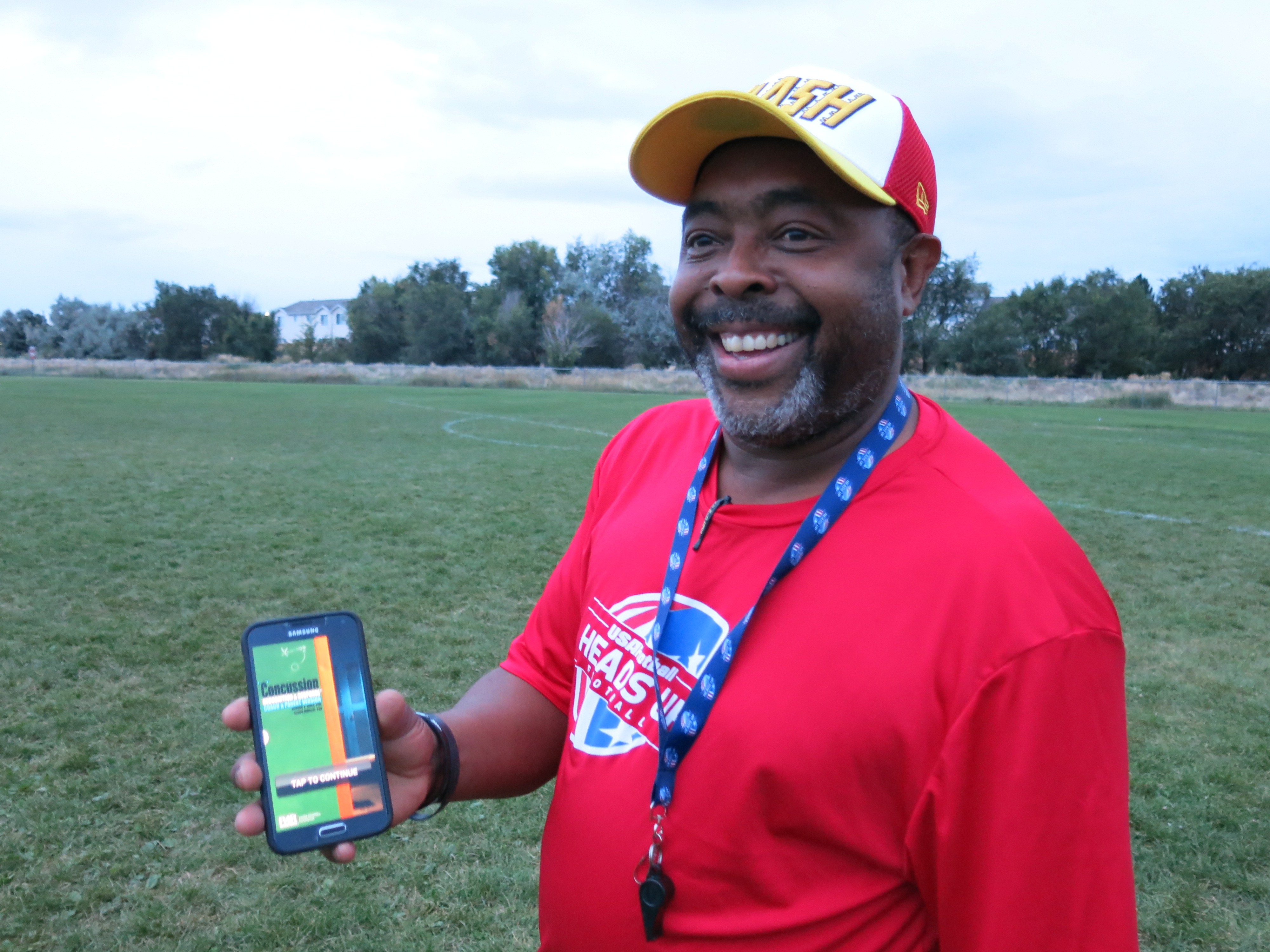 (Photo: CPR/John Daley)Jefferson and his coaches, as part of that change, have an app called Concussion Recognition and Response on their phones.  The app gives tips on recognizing concussions, how to handle them and return-to-play guidelines.

“If we suspect a concussion, we will hold a player out, whether it’s our top tier player or bottom player,” Jefferson says. “It’s all about the kids' safety at the end of the day.”

For 9-year-old Braylon Powell, he says if he’s again sidelined by a head-rattling injury, he’ll stay out. “So I won’t get hurt even worse,” Powell says.

His mom, LaToya Cook, says since the injury two years ago, Powell’s team has adopted the Heads Up  Football safety program. She thinks a similar incident would be handled differently now. “Now that I know what I know now about the whole concussion thing, I don’t think I would  have let him go back in,” Cook says.

With the fall sports season underway, and the magnitude of the concussion crisis still unfolding, those kinds of decisions are now the new normal.

Nowinski, the concussion awareness advocate, has some simple advice for parents who are worried about concussions in their child’s sport.

“Parents should just be extraordinarily conservative,” says Nowinski. “They need to sit down with their athlete before the season and try to explain to them the signs and the symptoms, they may not be old enough to understand, but try to explain it to them and try to convince them to tell you when they have them.”

He suggests even offering a child “some sort of reward” for telling a parent or coach if they’re feeling concussion-like symptoms, like difficulty thinking or concentrating, headache, nausea, dizziness or blurred vision.

For safety tips and more information, check out the websites for the Centers for Disease Control and Prevention or the Sports Legacy Institute.