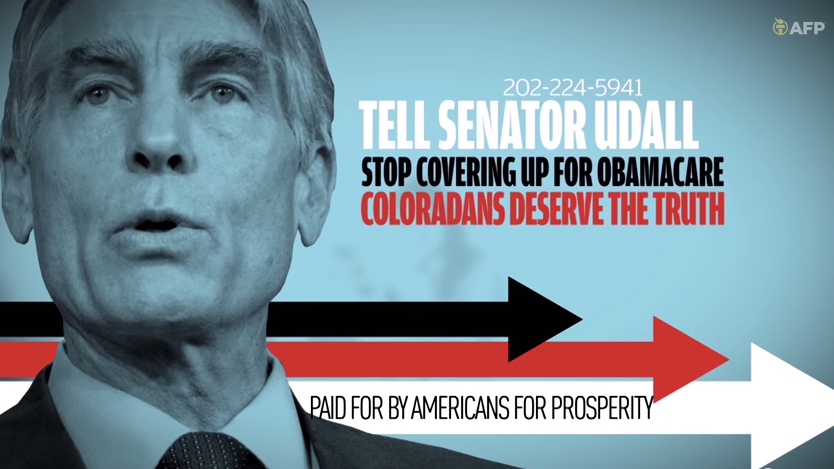 (Photo: Screenshot)Political ads in Colorado topped $60 million as of Friday, Sept. 5, with enough ads to fill 25 straight days of viewing.

And, as in Colorado, outside groups are beating candidates in ad spending, the Wesleyan Media Project reported.

The Wesleyan Media Project uses data from Kantar Media/CMAG, a private company, to analyze political advertising. It is based on videos recorded by Kantar/CMAG, and doesn’t include local cable buys.

CPR’s analysis is based on contracts filed by Colorado TV stations with the Federal Communications Commission (FCC). It doesn’t include ads broadcast solely on cable or satellite television, because those aren’t reported to the FCC.

In Colorado, 47 percent of the ads purchased through Sept. 5 favor Democrats, while 43 percent favor Republicans. The rest focus on initiatives on the November ballot.

Here’s a breakdown of the ads by affiliation:

Four of the top five spending groups nationally are active in Colorado:

Of those groups, only the Senate Majority PAC discloses its donors. The rest are nonprofits that don’t disclose funders. The ads by the nonprofits may criticize Udall, but they don’t specifically say to vote against him.

Here’s a look at Colorado’s television advertising by advertisers:

If you’re a TV viewer fed up with the constant stream of political ads, it’s likely because they’re so negative. So here’s some history.

Sunday marked the 50th anniversary of what is considered the first airing of a negative ad, called “Daisy.” It juxtaposes a young girl with a daisy with a nuclear explosion, urging voters to reelect President Lyndon Johnson.

The differences between the original attack ad and today’s ads?

“Daisy” was a minute long, and it only ran once. Today’s ads are 30 seconds and will keep coming through Nov. 4.