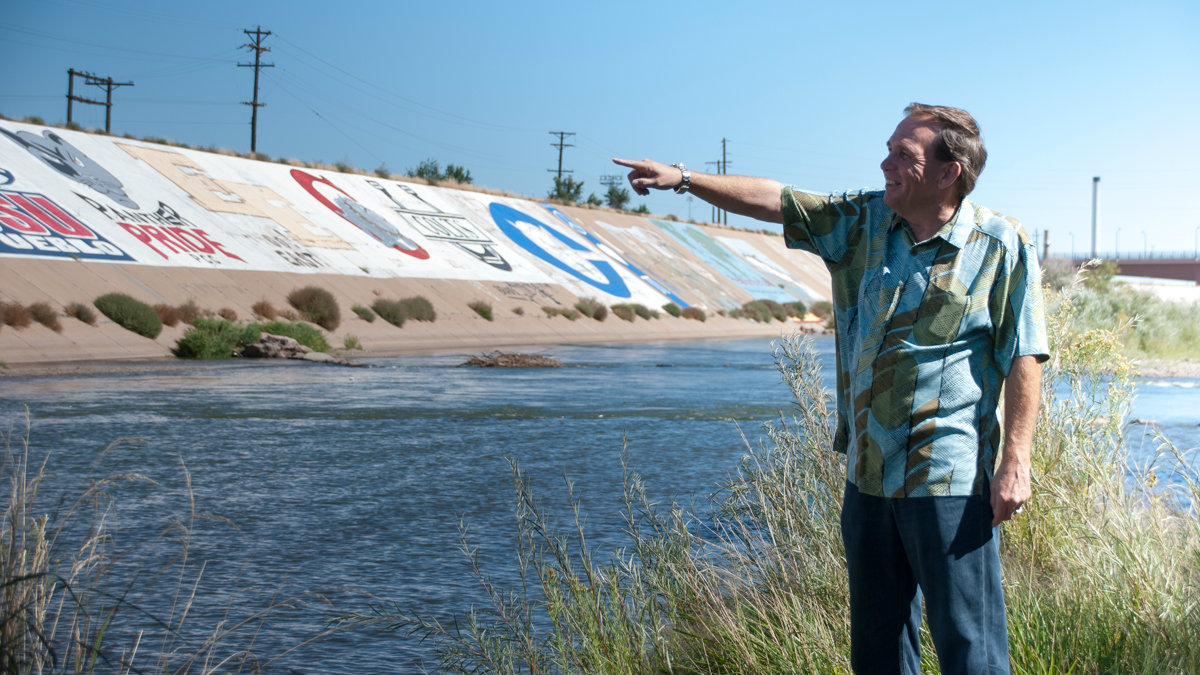 (Shanna Lewis/For CPR News)
The Pueblo Conservancy District has approved a major repair that will upgrade the aging levee along the Arkansas river. But the repairs will also destroy the world’s largest mural, which was painted on the levee walls by hundreds of artists over the past 40 years.
Today the conservancy district approved a $3.6 million contract for the first phase of work on the levee, which protects downtown Pueblo from flooding.
The repairs will take three or four winters to complete and the district has made plans to preserve the mural photographically prior to the beginning of the repair work
The district is hiring John Wark, a Pueblo based aerial and commercial photographer, to shoot high-resolution images of the mural that could be printed as large as eight by ten feet.
Wark says he will shoot images from both the air and the ground. He hopes to start shooting as soon as possible to take advantage of the fall foliage and he’ll finish before the construction crew begins demolition work.
“It’s going to be a very technical job,” Wark says. He notes  the importance of the project as a documentation for this piece of Pueblo’s history.
Conservancy district attorney Don Banner says the cost of the photography will be $1,600 and the images would be made available to different groups.
Pueblo artist Cynthia Ramu is the coordinator for the levee mural and has painted dozens of sections of it herself over the past 20 years.
“We all need to have high quality work and I know that John Wark can deliver it,” Ramu says of the photography project.
Ramu also wants to capture the history of the mural and the stories of the artists who painted it. To that end, she is meeting with archivists, curators and other levee artists, as well as exploring grant funding possibilities.
Grant writer Karen Waters of Pueblo spoke to the conservancy board. She says it’s unlikely that there would be state historic preservation funds made available for the project because the levee is not listed on the national historic register and the mural will be destroyed.
Waters says there may be other grants that might fund preservation and that the large number of local organizations that support this project would be a strength on an application.
The first phase of repair work will cover about 3,300 feet of the 2.8 mile long levee along the Arkansas River.
Conservancy district administrator Rick Kidd says that the work should start in November.
Kidd says the construction team will start its work in an area of concern that is upstream from where most of the mural paintings are located, so much of the artwork will not be affected by the phase one repair work this winter.