Lion's Lair is a Denver dive bar that proves even the seediest ones can be the most fun. One of its most wonderful qualities is despite its small size, it has hosted some of the city's biggest shows. The energy in the venue has produced some of the most memorable nights I've had in Denver.

From Warlock Pinchers playing a secret show before their sold out reunion concerts at Gothic Theatre in 2010 to watching Oakland's experimental rockers Sleepytime Gorilla Museum host an onstage costumed freak show a decade prior, Lion's Lair has hosted many epic evenings.

Everyone has a Lion's Lair story. Were you there to see the weirdly wonderful one-man band Captured! By Robots perform with his animatronic characters (think Chuck E. Cheese, but haunted)? Or in 2013 when '70s cult-rocker Jonathan Richman was booked for a few nights?

We often see what happens inside a venue like Lion's Lair when a rock photographer takes pictures at a show and we view them in a blog the next day or we're inundated with a bird's eye view from our friend's Instagram feed.

Photographer Gary Isaacs turned the Lion's Lair into the subject of his new photography exhibition up now at Leon Gallery (read the CPR Arts Bureau's recent story on the show). It features some of his favorite shots of the venue, but with an outside perspective and at all hours of the day. His pictures bring to life the grit, charm and crazy of one of Colfax Ave.'s greatest treasures.

In honor of the exhibit, I reached out to some of my favorite local celebrities to share their memories of this iconic venue. 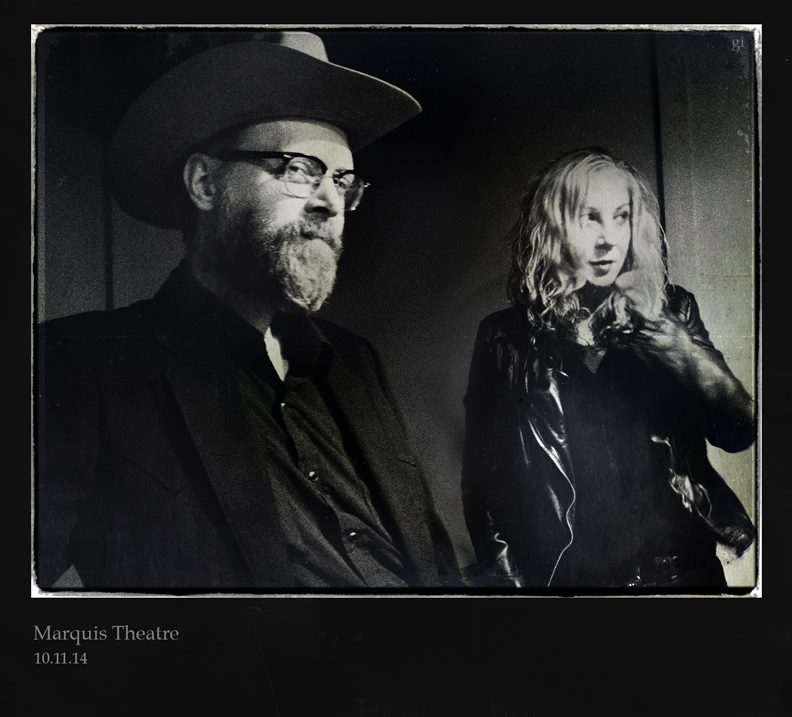 How many times have you played Lion's Lair?

What do you remember about the first time playing at Lion's Lair and what year was it?

SC: My first band to play the Lion's Lair was the Denver Gentlemen. I believe it was 1992. We had to move the booth in the back corner to make room to perform. We also had to bring our own PA.

The Auto Club's first ever show on a weekend was at the Lair in '93. To play a weekend night at the Lion's Lair was our only ambition. We were so excited and achieved all our goals.

Over the last two decades Slim Cessna's Auto Club has become a Denver treasure -- a staple of the music scene. What do you remember about your most recent shows at the Lion's Lair versus when you first started playing there? Is it the same audience? New fans?

SC: We still have wonderful shows at the Lion's Lair. It's so intimate and like family. They can't fit more than 110 people in that place. It's the true spirit of rock and roll. Beer, sweat, and losing yourself to something bigger and more important. Our audience comes and goes, but many of the old timers still come out for these shows.

Since the Lion's Lair is so small and you can bring in a larger audience, why did you choose Lion's Lair as the location to play your 20th anniversary shows?

I can't imagine there's much of a green room for bands at Lion's Lair. What's it like and how has it changed over the years?

SC: It used to be a grubby kitchen. Now they have a dirty sofa, but the pizza oven is gone.

Looking back, share some of your fondest memories of hanging out at Lion's Lair.

SC: The Auto Club used to practice about a block away and more often than not we would stop by the Lair afterward. I remember Jim [Compton] and Rod [Garcia] had a Karaoke night called KARAOKE a GOGO. I sang [Madonna's] "Into The Groove." Tony [Meggitt, bartender/co-owner] was really impressed I knew all the words. I remember doing the Popcorn with Little Giddle Partridge.

I remember a guy got shot in front of the stage at one of our shows. I wasn't able to look because it made me want to pass out. A few months later he showed me his scar and I did pass out.

Besides just hanging out or doing karaoke, any memorable concerts over the years?

SC: I've played so many and seen so many. I haven't lived in Denver for 15 years until recently. Now that I'm back I don't go out often, but I did see the Blasters with Michelle McManus last April. We had a blast!

Your friend, photographer Gary Isaacs is like an unspoken member of SCAC. Every time I've seen your band perform in Colorado for the last decade or so Gary is always there. After seeing his exhibit at Leon about Lion's Lair, how do you feel he captured the venue?

SC: Gary must have stood in front of that place taking pictures for years - and they're all lovely and perfect, but not a single photo of me. I hope they make Gary and the Lion's Lair national landmarks.

What years did you work at Lion's Lair?

What was your role there?

MM: My job was booking shows and slinging drinks for the kind and not so kind people of Denver.

You started off as a bartender there, what attracted you to it?

MM: My friends and I used to haunt the old Skylark Lounge when it was just a bunch of old drunks. We were sick of the clubs in Denver. We just happened to be driving down Colfax and a mutual friend was at the bar and told us to meet him there. We saw the sign and fell in love.

We walked in the door and a guy was playing a piano where the stage is now. His name was Dinky and he sang these rank sailor songs and would insert each of our names into the songs. So a crew of us just started going just to hear Dinky play. Pretty soon they were getting so busy that they needed help and I raised my hand. The rest is history.

As a bartender, what was the most memorable or popular drink at the time?

MM: It was called a "Cold F***." God, disgusting: vodka, schnapps and roses lime juice. GAG! The most popular drink was beer on tap and a shot of whiskey.

Before you started working there did you go specifically for the live music or was it more of a dive bar hangout?

MM: It was most definitely the dive bar atmosphere that we all loved. The storytelling about peoples lives. The intimacy of it all was so refreshing. Hearing the elders tell their stories about their lives, struggles, triumphs, loss and joys.

For the uninitiated, what the heck was Denver like back in the '90s?

MM: Denver was more small town than it is now. I don't even recognize neighborhoods anymore. We used to hang out in abandoned churches and drink beer. Practice places for bands back then are million dollar condos now. Everybody knew each other. The music scene was so diverse and alive.

Do you know who did the art on the iconic sign or have a story about it?

MM: John Lyons had somebody make it when he took over in the early '70s.

Any former staffers or personalities you want to mention that are synonymous with Lion's Lair?

MM: Tony Meggitt and I bartended side by side for years. I get to go back and guest bartend with him every now and then. We tell old stories and laugh so hard we cry. Andrea Schaap and I bartended together as well. She's still my best friend to this day.

I'm sure you saw some great bands play there. Could you list some of your favorites?

You bought Lion's Lair, right? What's the story behind this?

MM: John Lyons was diagnosed with terminal cancer in 1996. Tony, Doug Kauffman and I went in together and purchased it 10 days before John Lyons passed away in 1997.

Why did you decide to leave or sell your share?

MM: I decided to sell my share to the guys after I got married and had a baby. That place, as wonderful as it is, was all about hard living. I just wanted to focus on my kids and it was time to try something else. So my ex-husband and I opened WaterCourse Foods on 13th Ave.

Do you still go in and visit Lion's Lair? Does it still have that same feeling as it did when you worked there?

MM: I do go back and guest bartend. It's the same wonderful place. I just wish they would've kept the booths (coming from a much older broad now that needs to sit down more).

Tell me one of your fondest Lion's Lair memories.

MM: There are so many! It's so hard to pick one. I would have to go with Andrew Novick dressing up as Olivia Newton John in roller skates doing "Xanadu."

And the doubledecker bus rides we used to take. We'd fill the bus with a bunch of us hooligans and pick random dive bars to got to and roll in, all 75 plus people. Fond, fond memories.

I'd love to hear what you think about Gary Isaacs' Lion's Lair photography exhibit. What are your thoughts on how he captured a venue you were linked to for so long?

MM: I think Gary really captured that part of Colfax. Those are the people who are a part of the charm and magic of that block. And the iconic sign I fell in love with at first sight many, many years ago.

MM: Thanks for letting me sit down and relive a magical time in Denver's history. Boy did we have fun. As Dinky used to sing about the Lion's Lair: "We like it here, we like it here! You bet your a** we like it here! The Lair is our home! Never more to roam!"

Lion's Lair is at 2022 E. Colfax Avenue. Who knows, maybe Michelle will be your bartender!

You can share your fondest memories or tell us about your favorite moments at Lion's Lair in the comment section below!

Gary Isaacs' photography exhibition “36 Views of the Lion’s Lair” is at Leon Gallery through Jan. 4, 2015.