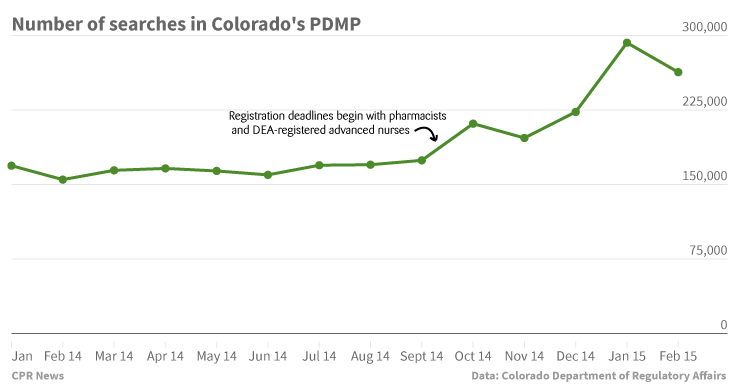 (CPR: Megan Arellano)Last month, Doctor David Klekamp was treating a patient -- a friend that he's known for 37 years -- and finished up by prescribing him the opioid Vicodin for pain relief.

The patient requested a different opiate, oxycodone, instead, and though the dentist found it odd, he was prepared to prescribe it.  But before he signed off on the medicine, his staff checked state's Prescription Drug Monitoring Program, designed to catch patients who may be seeking to abuse powerful prescription drugs.

And that's how Klekamp learned that his friend had received 540 different oxycodone pills in the previous three months.

The U.S. Centers for Disease Control and Prevention calls this kind of scenario a part of the "opioid epidemic." Powerful medications used to treat pain are being abused, causing overdose deaths across the nation and in Colorado.

The PDMP is supposed to help head off situations like the one Klekamp describes. But not everyone uses it.

Nationally, about half of primary care physicians use their monitoring programs, according to research from Johns Hopkins University. Even fewer licensed prescribers in the nation, just more than a third, register to use their programs, another study says.

Back in December 2013, Colorado was slightly worse. Only 31 percent of Klekamp's peers had an account to check the Colorado PDMP.

Then, this January, the percentage of Colorado health care professionals with accounts for the state PDMP shot up to 92 percent--not only among doctors and pharmacists, but also with optometrists, podiatrists, and even veterinarians.

But the law doesn't require anyone to use their account. And as Klekamp learned, not everyone responds to potential abuse in the same way either. When he discovered his friend appeared to be filling all his prescriptions at the same pharmacy, he was shocked.

The pharmacist told him that his friend was being monitored and that his friend signed a document sometimes known as a "pain contract" which said he wouldn't misuse the medication, according to Klekamp.

Colorado's PDMP won't ever tell prescribers how to do their jobs, according to Lauren Larson, the director of the state Division of Professions and Occupations, which houses the program. Nor is the state interested in forcing certain prescribers to consult the PDMP, like in New York State, Larson said.

"We're not out here to try and monitor" whether licensed prescribers are doing it, Larson said. "We want people to know about the tool, we want to encourage its utilization, and when there's risky behavior, we want to alert practitioners. We think those are the appropriate regulatory steps."

Larson added that "pain contracts," like the document that Klekamp's friend signed, are common, and even encouraged.

In some ways, the state's approach to the PDMP seems to have worked. The number of times the system was used has gone way up since registration became mandatory. And the number of people who get prescriptions has gone down, perhaps suggesting stricter prescribing. 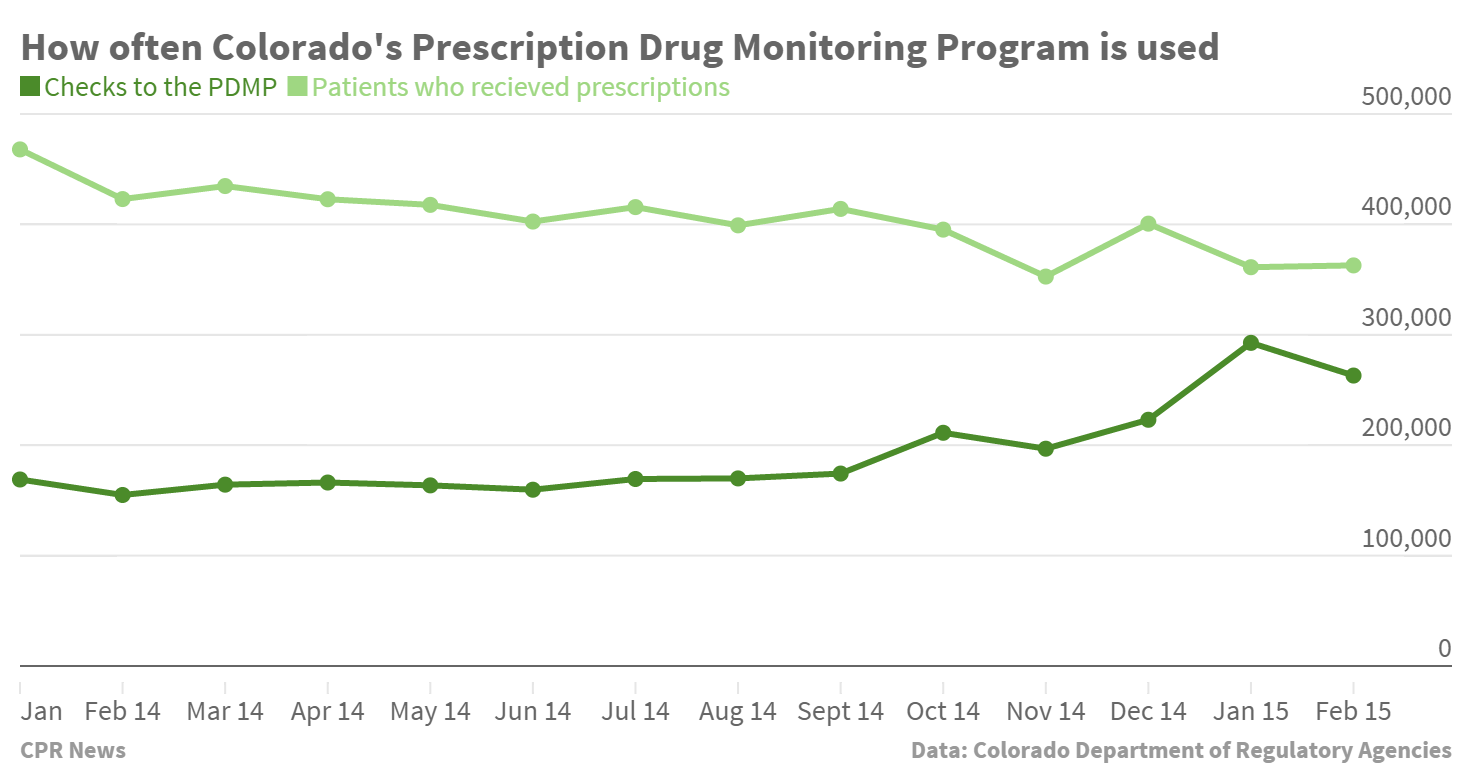 (CPR: Megan Arellano)In fact, the number of times the system was used started to go up as soon as staggered registration deadlines started in September 2014.

"We're watching and this is very new data," Larson says. It's possible that some new prescribers tried out the system once in January, and don't have any patients that they actually feel the need to monitor.

"That's just one plausible explanation. It's really too early to speculate on what our target percentage is or how much it would fluctuate over time," Larson said.

"When you lay down a piece of paper that's got a year's worth of drugs on it," Klekamp said it empowers prescribers.