Check out Scott's previous coverage of the SXSW 2015 festivities. 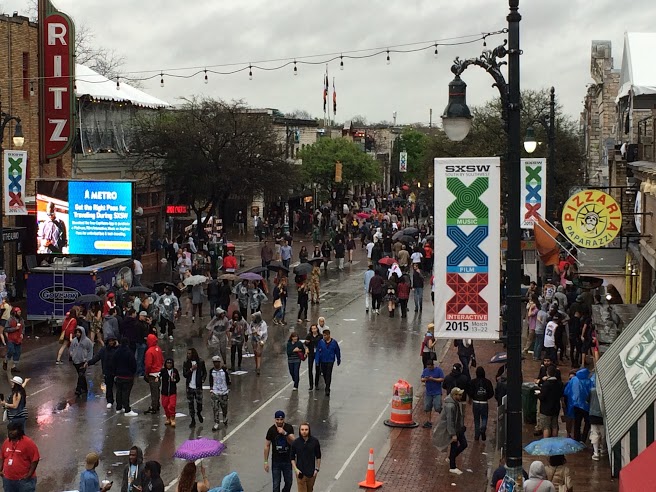 (Photo: CPR / Scott Carney)At this point, I’m realizing with each passing day that SXSW isn’t so much a music festival as it is a straight-up endurance test. Three days of non-stop music, food, drinks, and running around take their toll, and even the most ardent music fans must have been feeling sluggish on Friday morning.

I was no exception, and instead of bolting out the door early in the morning like I had the previous three days, I couldn’t muster the energy to see any music until 1 p.m. I did see the inside of my eyelids, however, and they were fantastic.

Rain kept most early concert-goers at bay Friday morning compared to the previous days. Noticeably fewer fans trudged out into the mud-drenched sidewalks and neon ponchos peppered the overcast landscape.

People clearly preferred indoors to outdoors and many found solace at the Colorado Music Party in the 512. Most of my afternoon was spent there, and I later made my way to their lovely Revolutionary Reception at the nearby Parkside restaurant, introducing myself to the many people who shape and sculpt the Colorado music scene into what it is. I felt honored to be in their company, chitchatting with friendly folks while I ate French fries and polenta cakes.

After the reception, I walked east on 6th Street to the Hotel Vegas. Featuring a large outdoor stage and an intimate indoor club, live music continuously blared through the venue and I spent the rest of my night bouncing between sets.

First up was the Los Angeles-based WAND, whom alternated between aggressive, sludgy garage rock and brief spasms of White Fence-esque neo-psychedelia. Meatbodies, another L.A. band, continued the raucous tone, performing a pummelling set in the vein of early Ty Segall. Several crowd surfing attempts were made by a handful of brave attendees, but their few moments of success were usually met by a subsequent faceplant in the mud.

Australia’s Twerps followed and lightened the mood with both their laid-back stylings and affable demeanor, engaging in one of the most polite sound checks I have ever heard. Delicate Steve played shortly afterwards, combining soaring synthesized guitar riffs with complex, thumping percussion.

Seattle’s La Luz played jangly surf rock and soon I ventured inside to catch Celestial Shore, a gauzy dream-pop trio from Brooklyn. Electrical problems hindered the start of Jacco Gardner’s set, but after some trial and error the Netherlands-based multi-instrumentalist breezed through several songs of his new LP "Hypnophobia."

Though they didn’t get on until well after 1 a.m., the always-enjoyable Thee Oh Sees closed out the night with a fist-pumpingly good showcase of songs old and new.

The last day is finally here - I’m going to try and make it count. Stay tuned!