After the U.S. Supreme Court ruled Friday that same sex marriage is legal in all 50 states, reaction came swift on both sides of the issue in Colorado. And a rally celebrating the court's ruling drew a big crowd Friday evening.

Gov. John Hickenlooper was among those at Friday's rally (photos above). Declaring "love conquers all," he took a selfie with his smart phone from the State House steps with the crowd stretched out behind him.

Fran and Anna Simon, who were the first same-sex couple to be married in Denver last year, earlier called the decision "historic."

"Our marriage will be recognized in all 50 states," Fran Simon said. "We don't have to worry about that traveling from state to state, or if we want to move. It just brings so much joy to us." 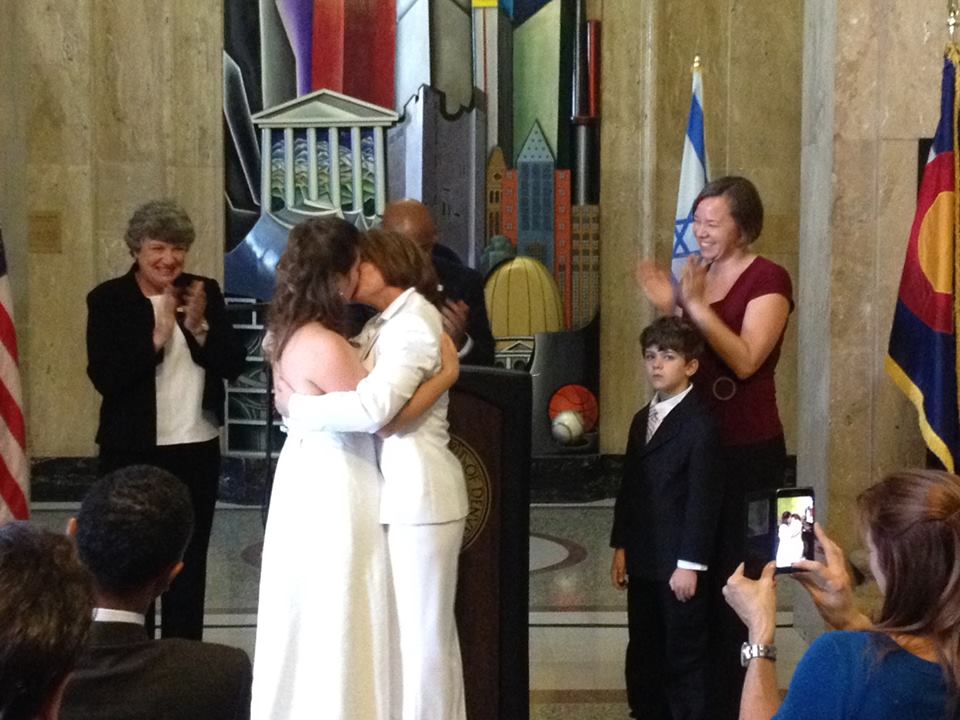 (Courtesy of the Simon Family)Denver County Clerk and Recorder Debra Johnson married the couple. She was one of the first county clerks in the state to issue marriage licenses to same-sex couples before the issue was settled in the courts in October 2014.

“The Supreme Court recognized what my office fought hard to bring to reality here in Colorado,” Johnson said in a statement.

The Simons say they still have work to do because businesses and religious institutions may still refuse to serve gay couples. But tonight, Fran Simon plans to attend a rally on the west steps of the state Capitol at 6:30 p.m. to celebrate the decision.

U.S. Rep. Jared Polis, D-Boulder, was in Washington outside of the Supreme Court building as the decision was announced. He's one of a few openly gay members of Congress.

“Despite this milestone, however, the battle for LGBT rights is not over," Polis said in a statement. "Marriage equality doesn’t mean that a gay employee can’t still be fired from his job when his boss finds out, or that a transgender individual can’t still be denied housing."

Sen. Pat Steadman, D-Denver, who was instrumental to the civil unions bill passed by the Colorado Legislature, celebrated the ruling as well.

"Having this day dawn right now, it’s a little hard to believe," he said.

He said it's unclear whether same-sex marriage licenses issued before the October 2014 ruling are legal; to avoid any possible legal issues, he advised, those couples should get remarried now.

Some Republicans were full-throated in their displeasure with the ruling. U.S. Rep. Doug Lamborn, R-Colorado Springs, called the decision a "slap in the face of all Americans."

"I am very disappointed that the Supreme Court chose to utilize their power to disenfranchise millions of Americans with valid moral and cultural concerns via this decision," Lamborn said in a statement.

The Colorado Catholic Conference said the ruling is "gravely unjust" and that marriage precedes the creation of states.

"The Church in Colorado will continue to defend and support marriage as it was created because it alone leads to a healthy, flourishing society," read a statement from Jenny Kraska, executive director of the Colorado Catholic Conference.

But U.S. Rep. Mike Coffman, R-Aurora, said in a statement that the "world is changing."

"It is time we move forward and focus on the big debates of our day — how to keep our country safe and get Americans back to work," Coffman said.

"This battle is far, far from over," said Mike Norton, a Denver-based attorney with the Alliance Defending Freedom, a faith-based advocacy organization.

He pointed to the ongoing fight over abortion since the Roe vs. Wade Supreme Court decision in the 1970s. "The Supreme Court thinks, I think, that this will end the debate. But it won't," he said.

Norton said the ruling opens the door to litigation against religious institutions unwilling to marry same-sex couples. Eventually, he believes, such a case will reach the Supreme Court.

However, Susannah Pollvogt, an associate professor at Washburn University in Kansas and formerly of the University of Denver law school, said overturning Friday's ruling will be exceptionally difficult.

"Individuals have married, and have started to exist in our society as fully equal to opposite-sex couples," Pollvogt said. "For the Supreme Court to begin to grant that right, and then at some later stage, tear it away, would be profoundly undemocratic."