Robert Lewis Dear faces his first court hearing Monday in Friday's attack on a Planned Parenthood clinic in Colorado Springs, in which three people were shot and killed and nine were injured.

Among the dead are a University of Colorado Police Officer, an Iraq War veteran and father of two and a mother of two accompanying a friend to the clinic.

Colorado Springs police say they will not disclose why the alleged gunman opened fire at the clinic. In a statement Sunday police stated they are sealing the warrants related to the case against Dear, 57. Authorities add they are not providing information on the weapon used in Friday's shooting or a timeline of events.

U.S. Attorney General Loretta Lynch condemned the attack and said federal officials stand ready to offer assistance to the district attorney and state and local law enforcement in Colorado as they move forward with their investigation.

"This unconscionable attack was not only a crime against the Colorado Springs community, but a crime against women receiving healthcare services at Planned Parenthood, law enforcement seeking to protect and serve, and other innocent people," Lynch said.  "It was also an assault on the rule of law, and an attack on all Americans' right to safety and security."

Parishioners at the nondenominational Hope Chapel in Colorado Springs remembered 44-year-old Garrett Swasey on Sunday as a trusted partner in prayer and a champion athlete. 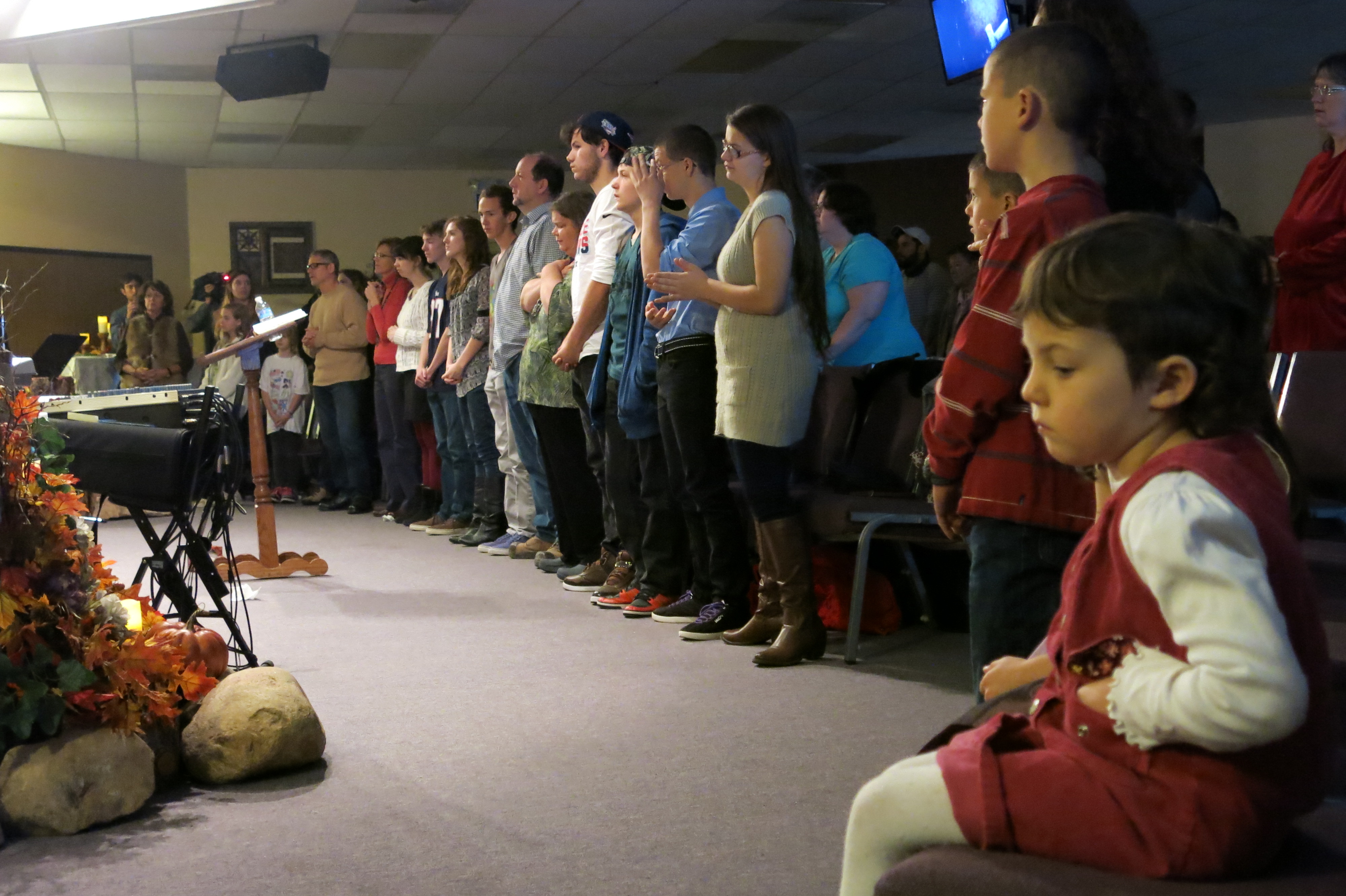 (Megan Verlee/CPR News)Swasey's widow, Rachel Swasey, said in a statement Sunday the family will cherish memories of him tossing a football with his son and snuggling with his daughter.

"Helping others brought him deep satisfaction and being a police officer was a part of him. In the end, his last act was for the safety and wellbeing of others and was a tribute to his life. What we need most today, and in the coming weeks, is your prayers for our family and for others who were impacted by this tragedy," she said.

"We are grateful for the tremendous outpouring of love that has come from the community and across the nation. We understand this is a public tragedy felt by many and we also appreciate your support for us to grieve privately."

She told media outlets that Garrett Swasey was "one of my best friends" as they grew up together practicing figure skating in Melrose, Massachusetts. Before he became a police officer, Swasey was a junior national couples ice dancing champion.

An emotional Kerrigan says she wasn't surprised he took a career path where he helped others first. She says he always had fun and did everything with a smile.

Swasey's father told the Boston Globe that his son moved to Colorado in the 1980s to pursue competitive figure skating and became an officer six years ago.

Iraq War Veteran, A Father Of 2, Among The Dead

A friend says of one of the three people who died in the shooting was an Iraq War veteran who had recently left the military.

Amburh Butler, who spoke on behalf of 29-year-old Ke'Arre Stewart's family, says he was accompanying someone at the clinic when he was killed. She says he leaves behind two young daughters in Texas, where he grew up.

Butler says the Army stationed Ke'Arre at Fort Carson in Colorado Springs in 2013. He was discharged from the military last year, and she says he used to write her letters from Iraq that detailed the horrors of fighting on the front lines. She last spoke to him on Thursday, when he sounded upbeat to be spending Thanksgiving with friends.

Mother Of Two Was Also Killed

The father of a Colorado Springs woman says she was accompanying a friend to the clinic when she was killed in the rampage.

John Ah-King told The Denver Post that his daughter 36-year-old Jennifer Markovsky was one of three people who died Friday when a gunman opened fire. He described Markovsky as a kind-hearted, lovable person with two children.

Gunman 'Broke In' To Planned Parenthood

After the Saturday vigils for those killed and injured in the attack, the regional head of Planned Parenthood said none of the clinic's 15 employees were hurt.

Cowart told The Associated Press the shooter "broke in" to the clinic but didn't get past a locked door leading to the main part of the facility. A security guard had left for the day when the gunman launched his attack. When asked if the clinic should have more security, Cowart said people going to a health clinic shouldn't have to walk through metal detectors.

All of its staff undergo regular security trainings, and Cowert said that from everything she’s heard about how Friday’s attack unfolded, workers at the clinic followed that training.

"They got everybody into the back part of the building, past locked doors. They got people into individual, small locked offices. They knew to hunker down, they knew to quiet their cell phones."

She said the organization would learn from the attack, "square our shoulders" and carry on with its mission.

After her remarks, a woman in the audience stood up and objected to the vigil becoming a "political statement" before leaving.

Earlier, Rev. Nori Rost called the gunman a "domestic terrorist." In the back of the room, someone held a sign that said "Women's bodies are not battlefields. Neither is our town."

A Roman Catholic priest who holds a weekly Mass in front of the Colorado Springs Planned Parenthood clinic that was attacked — and who has participated in anti-abortion demonstrations — says the alleged gunman was not part of his group.

The Rev. Bill Carmody said Saturday he does not recognize Dear.

Typically, 15 to 20 people take part in Carmody's weekly service, but only about five showed up Friday morning because it was cold and some members were away because of Thanksgiving.

Carmody, who has held Mass in front of the clinic for 20 years, says the group left the area more than an hour before the gunfire began.

He says, "We missed all the action, thank God."

To Hartsel From The Carolinas

Records show Dear purchased property in the Park County town of Hartsel about a year ago. On Saturday, about a dozen police vehicles and fire trucks were parked near a small white trailer there. 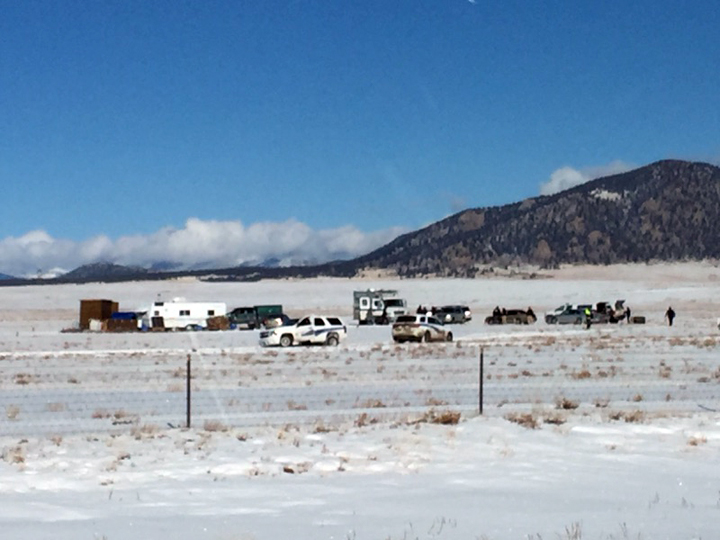 Dear lived with a woman and two German shepherds in a dilapidated recreational vehicle with no running water, sewer or electricity.

Metal scraps litter the 57-year-old man's 5-acre lot near the sparsely populated mountain town of Hartsel, where a few of his neighbors grow marijuana and boast solitary lifestyles.

The New York Times reported from one of former Dear's homes, in South Carolina, that:

He was generally conservative, but not obsessed with politics. He kept guns around the house for personal protection and hunting, and he taught their son to hunt doves, as many Southern fathers do. He believed that abortion was wrong, but it was not something that he spoke about compulsively. “It was never really a topic of discussion,” Ms. Ross said. He did not have many close friends.

The Times also reported that Dear had lived in a small yellow house without running water near Black Mountain, North Carolina, where "two sticks, forming a cross, were attached to a padlocked shed that was filled with bedding, gas canisters and worn boxes of beer."

Neighbors from both South and North Carolina told The Associated Press that Dear was a recluse who stashed food in the woods, avoided eye contact, warned neighbors about government spying and passed out anti-Obama pamphlets.

Dear is scheduled to appear in El Paso County Court on Monday morning.