On a brisk fall morning, an ambulance pulled up in front of a downtown Denver office tower.

"I think the patient is going to make it," Dr. Irene Aguilar said as a team rolled the gurney out.

This wasn't a medical emergency; it was a bit of political theater. There was no patient on the gurney. Instead, there were boxes and boxes of pages bearing signatures being delivered to Colorado's Secretary of State's office. The group ColoradoCareYes gathered more than 100,000 signatures to put a publicly-financed, comprehensive, Medicare-like health system on the ballot next fall.

Under the plan Coloradans would still pick their own providers, but the new system would pick up all the bills. And there would be no deductibles and fewer and smaller co-pays.

“Our current system gouges us financially," said Ken Connell, a ColoradoCareYes volunteer. "Too many don’t have access until they’re too far along the sick path."

Connell says he's been advocating for changes to health care insurance for more than a decade, ever since his 33-year-old son took his own life. Connell says better access to mental health care could have made a difference for his son.

“We could not get him care," Connell said. “It’s a human right. We should be taking care of each other, as long as we can, and we certainly have the resources in this country.”

Voters in Colorado made the state the first in the nation to legalize recreational pot. Next year, they could vote in another first: a single-payer health system that provides universal coverage for every single Coloradan.

It’s already shaping up to be a big fight.

Aguilar says Obamacare has been a good start, slicing Colorado’s uninsured rate in half. But she says many are still uninsured, while others struggle to pay their premiums and out-of-pocket costs.

“That’s sort of the idea behind ColoradoCare is to have everybody paying in but everybody having access to healthcare that will keep them healthy, keep them working, keep them contributing to our society,” said Aguilar.

So how will everybody be paying in? Colorado employers would pay a nearly 7 percent payroll tax. Employees would pay 3 percent or more of their gross pay. The self-employed would need to pony up 10 percent of their annual net income. All in all, supporters say the tax hikes will raise around $25 billion and save residents money in the long run.

At the rally, there seemed to be only one person opposed to the idea.

Lockwood says the plan will make Colorado less attractive to businesses and millennials.

“Really, I think the biggest part of this is that it’s an unrestrained tax hike," Lockwood said.

That's a big hurdle. For years, Coloradans have shot down tax increases, and “I don’t think that there have been many, if any, times when Colorado has bit off something that big," Lueck said.

That price tag also scares health economist Linda Gorman, who is with the Colorado-based Independence Institute, a free-market think tank.

“The finances don’t work," she said, citing Vermont's attempt at a similar system. The Democratic-controlled state Legislature there passed a state-run universal healthcare bill a few years ago, but the governor pulled the plug after financial estimates predicted the program would cause large tax increases and a ballooning of the state budget.

"They don’t have to have their residence in Colorado," she said.

Gorman is also also concerned the ColoradoCare proposal would put universal access in the state’s Constitution. "Something as dynamic as health, healthcare in general, should not be enshrined in the Colorado Constitution," she said.

“I think this will get a lot of national attention," he said.

Eisenbrey studied how the U.S. health system compares to Canada's, which is a single-payer system. He found the U.S. pays far more for healthcare than our northern neighbor. In part, that’s because of all the money our insurance industry spends on administration, management and marketing, he said. If Colorado voters pass this measure “costs would go down the way they have in Canada."

But he says there would be a different kind of cost: “I’d say the biggest problem is there are a lot of people could lose jobs."

"All of that marketing, advertising, accounting, all of the management of the various private insurance companies is done by people, who are employed to do it," he said.

“When the insurance companies come in against us, they have money, [but] we have the idea," said Reid, a high-profile journalist and author who has written extensively on and produced public TV documentaries about health care systems around the world. "So it’ll be interesting to see which wins in American politics.” 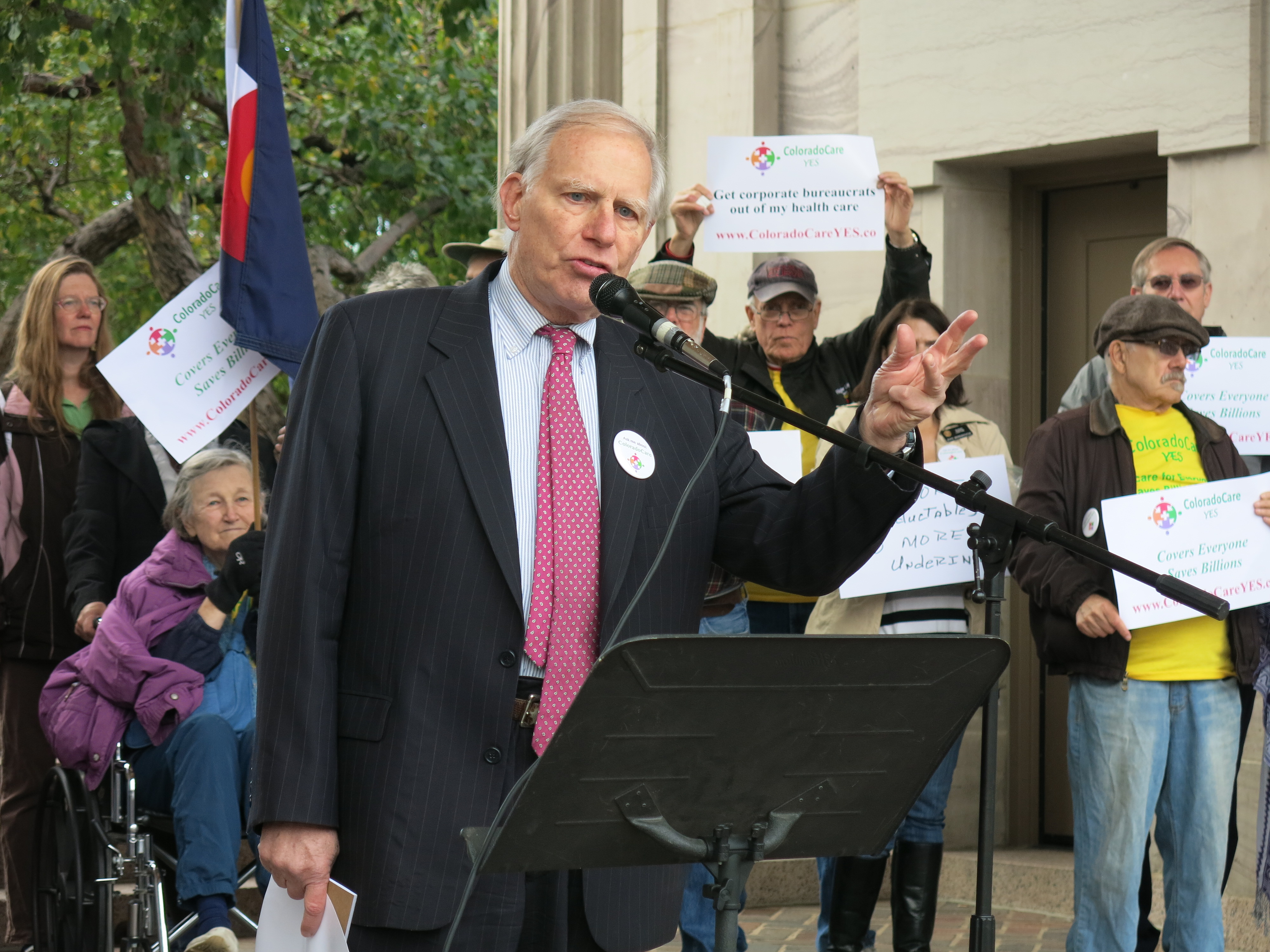 (John Daley/CPR News)The single-payer advocacy group ColoradoCareYes raised nearly $330,000 in contributions in 2015, according to filings made with the Colorado Secretary of State's office. That put the organization's donations in the top 10 to Colorado issue groups this year. Hundreds of people contributed to ColoradoCareYes, many in small sums. Ten people gave more than $6,000 each, including a pair of leaders with the group, Lyn Gullette and Ivan Miller.

It's not clear how much money the group opposing the single-payer ballot measure, Advancing Colorado, has raised. According to the Secretary of State's office, it's not a registered committee, at least under that name. Under some circumstances, the state does not require registration or reporting of contributions and expenditures by non-profit advocacy groups that are so-called 501(c)(4)s, like Advancing Colorado.
Advancing Colorado has launched a digital campaign targeting Amendment 69, called "ColoradoCare is a killer." The group says the effort includes a petition and ads on Google and Facebook, highlighting the costs of the single-payer proposal.
Other forces opposed to the single-payer ballot initiative also appear to be mobilizing. A group called "Committee to Stop Colorado Care," based in Parker, registered with the state in November.

Whatever those numbers say, for the measure to pass voters will need to embrace higher taxes. The conversation is spurring much interest and money from vested interests both inside and outside of the state.

Michele Lueck, with the Colorado Health Institute, says if the measure passes it would be a bold move, but Colorado voters have been bold before.

“We voted for pot, right?" said Lueck. "That put us on the map, so this could be on the map in a different kind of way, but similarly on the cutting edge."

Other than taxes on marijuana or tobacco, Colorado voters haven't pass a statewide tax hike for more than two decades.

Back in downtown Denver, single-payer supporter Ken Connell ponders the stakes ahead for next year's vote. "If we get this passed in Colorado it will transform health care in America," Connell said.

It's a bold statement, but it may be one both sides would agree on.

Correction: The original headline and story used the term "state-run," which was not accurate. The story has been updated to remove the term.