The group pushing to renew a Denver-area cultural tax has raised more than $1.6 million for the effort. And the organizations that have contributed the most money to the campaign thus far also stand to benefit the most.

Voters across seven counties will decide this fall whether to extend the Scientific and Cultural Facilities District, or SCFD. The tax district, which dates back to 1989, handed out more than $50 million to more than 270 arts, culture and science organizations last year.

Currently 64-percent of that pot is earmarked for the five biggest organizations in the top tier: The Denver Museum of Nature and Science (DMNS), the Denver Zoo, the Denver Art Museum, the Denver Center for the Performing Arts and the Denver Botanic Gardens.

Most of the money contributed so far to the campaign comes from these five institutions.  In fact, the share of SCFD funds they now split among themselves corresponds to the percentage they’ve each given to the campaign this year. 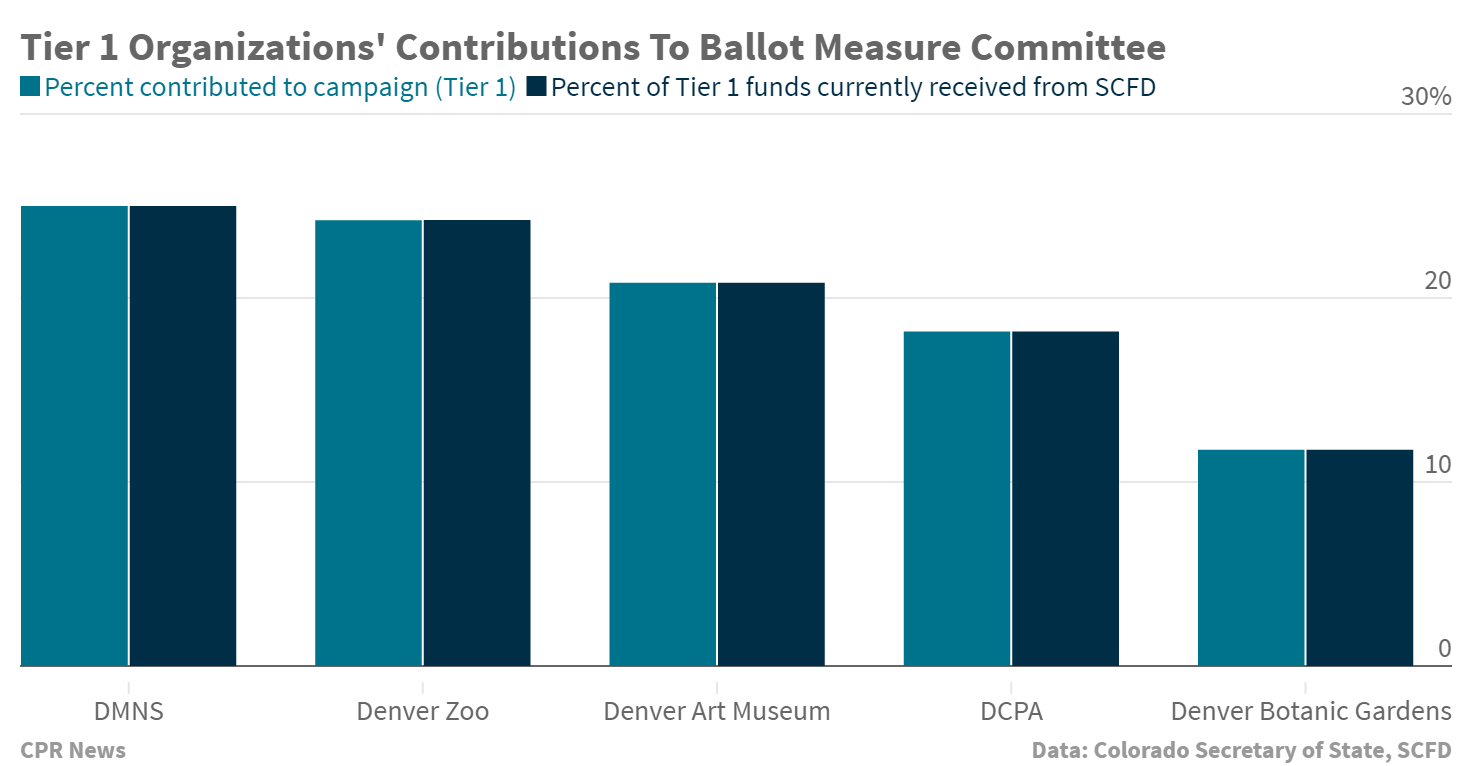 “When we have shared expenses for anything, we tend to go back to the formula,” Ed Scholz, vice president of business operations for the DMNS, said. “It was done that way for the campaign in the past, and it’s a normal and natural way for us to divvy things up.”

The DMNS and the Denver Zoo have given the most money, $251,500 and $243,720 respectively. Representatives from both organizations said that this money comes from earned revenue and not SCFD grants. Smaller groups like Golden’s Colorado Mountain Club and Central City Opera have also contributed.

“The museum is not required to contribute to the fund,” Scholz said. “We see it as a valuable investment, considering everything the Scientific and Cultural Facilities District allows all its funded organizations to provide for the community.”

Citizens for Arts to Zoo (CATZ) -- the committee behind SCFD -- has more money to spend than most statewide ballot campaigns, according to the latest reports filed earlier this week.

“The campaign will raise and spend as much money as we need to make sure every voter in the Denver area gets a chance to hear about the value of SCFD,” said CATZ spokesperson Michele Ames. “The main message is a very simple one: The SCFD supports all the things that you love.”

The fund comes from a 0.1 percent sales and use tax. But that money -- one cent added to a $10 purchase -- will dry up if voters do not approve an extension of SCFD before the June 2018 sunset date.

This fund is significant for the organizations that receive it. And it’s the envy of other groups that hope to qualify for SCFD grants. The CATZ campaign currently has the third-highest sum. And it’s already more than the renewal effort spent in 2004 -- about $1.48 million.

Denver political strategist Rick Ridder says he expects CATZ to raise at least another $1 million in order to get its message out leading up to the November election. While most of the campaign’s costs this year have gone to consulting work, Ridder says around 70 percent of campaign money typically goes to communications like TV, radio and online advertising.

“I think what’s important is the cost of campaigns has gone up dramatically since 2004,” he said.

There are no registered campaigns that oppose CATZ. But Ridder says the campaign is facing a good third of Colorado voters who typically vote no on any taxes.

“That does not leave a lot of room for error,” Ridder said. “It may be a little easier in the metro area, but you still have significant tax resistance.”

Ames says the CATZ campaign does not have a financial goal in mind. But she expects a crowded field this November in a presidential election year that includes other significant state races and ballot issues.

But the campaign’s current funds suggest that cultural institutions can raise plenty without a tax subsidy, says Jon Caldara, president of the Independence Institute -- a free market think tank in Denver.

“The fact that [CATZ] gets $1.6 million already and we’re still half a year away from an election tells me that there are a lot of people with deep pockets who want to see these things succeed,” Caldara said. “That’s terrific, and that’s why we have charity.”

Caldara is critical of the SCFD. But he says going up against the tax district -- and the organizations it serves -- during an election is a “loser’s losers battle” because of its emotional appeal.

“You have to wonder why our tax capacity should be going to help people go to the opera or to the symphony when there are more basic services that government should be providing,” he said. “And as there are more needs for healthcare, transportation and education, every little bit helps.”

Ames, of CATZ, points to the previous success that SCFD has had at the polls. Voters passed two similar extensions by wide margins in 1994 and 2004.

“I feel like we have such a strong position to start from because people love the institutions that are supported by this sales tax,” Ames said. “They’ve said that for the last 30 years and they’ve said it resoundingly at every election cycle.”