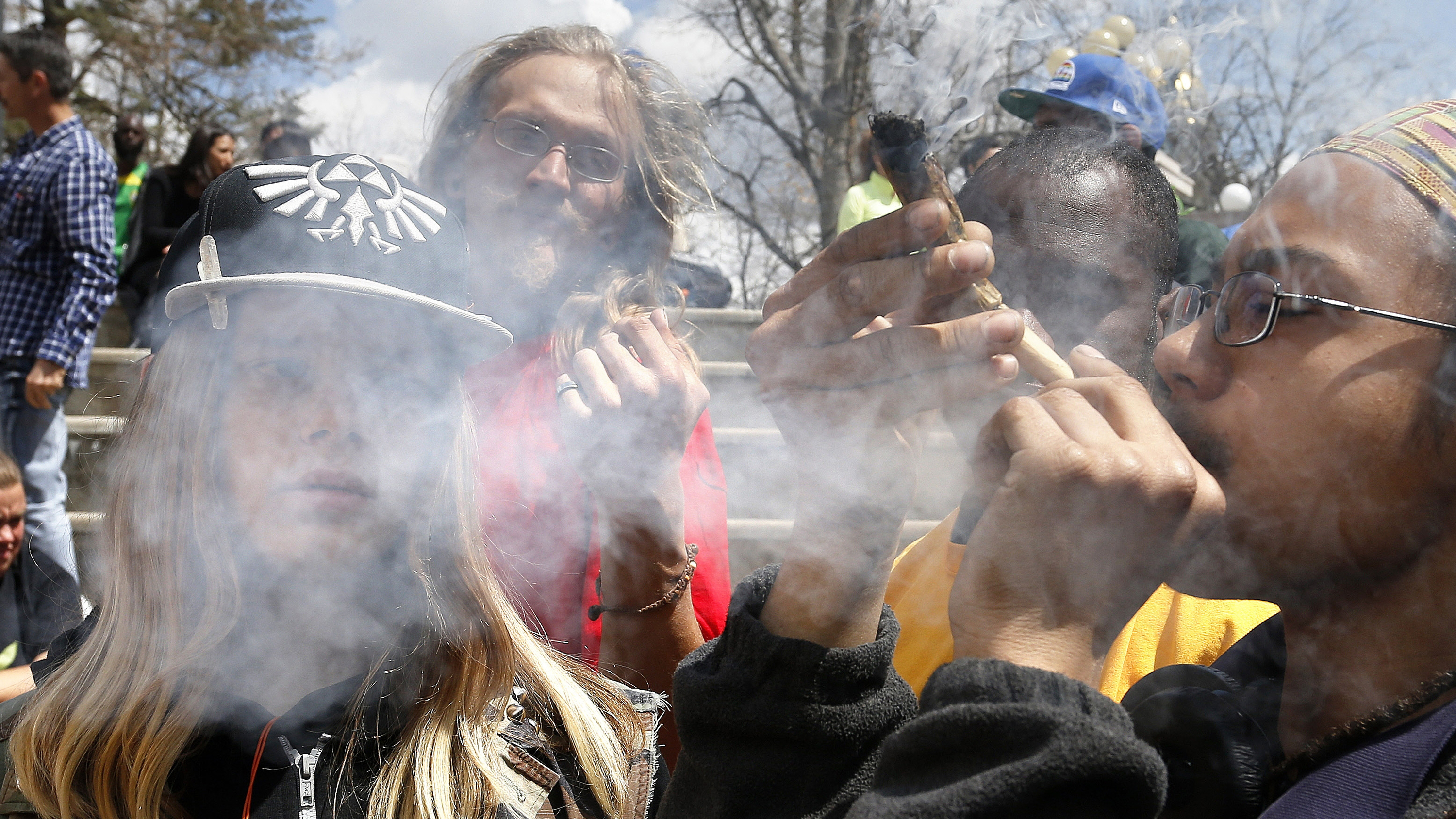 (AP Photo/File)Marijuana is still illegal in Colorado for anyone under 21, so perhaps it’s not surprising that juveniles are coming to dominate marijuana arrests in the state. But another startling trend has developed. Arrest rates have risen dramatically for young blacks and Latinos.

Ricky Montoya is among the statistics. On a recent busy morning at juvenile court in Denver, Montoya didn’t look phased by the judge’s order that he pay a $1,000 fine for his third marijuana possession offense. Nor was he shocked to learn police are increasingly citing and arresting Latinos like him.

"I don't think they think that white people would smoke as much as we do," he says.

His mom let out a gasp when the judge handed down the fine.

A Colorado Department of Public Health and Environment survey found there wasn’t a huge racial difference in who smokes pot. Yet the arrest rate for white kids is falling while the black and Latino arrest rate is rising.

From 2012 to 2014 the arrest rate for white juveniles with marijuana offenses fell 9 percent, at the same time the marijuana arrest rates jumped 26 percent and 58 percent for Latinos and blacks respectively, according to a report produced by the Colorado Department of Public Safety. 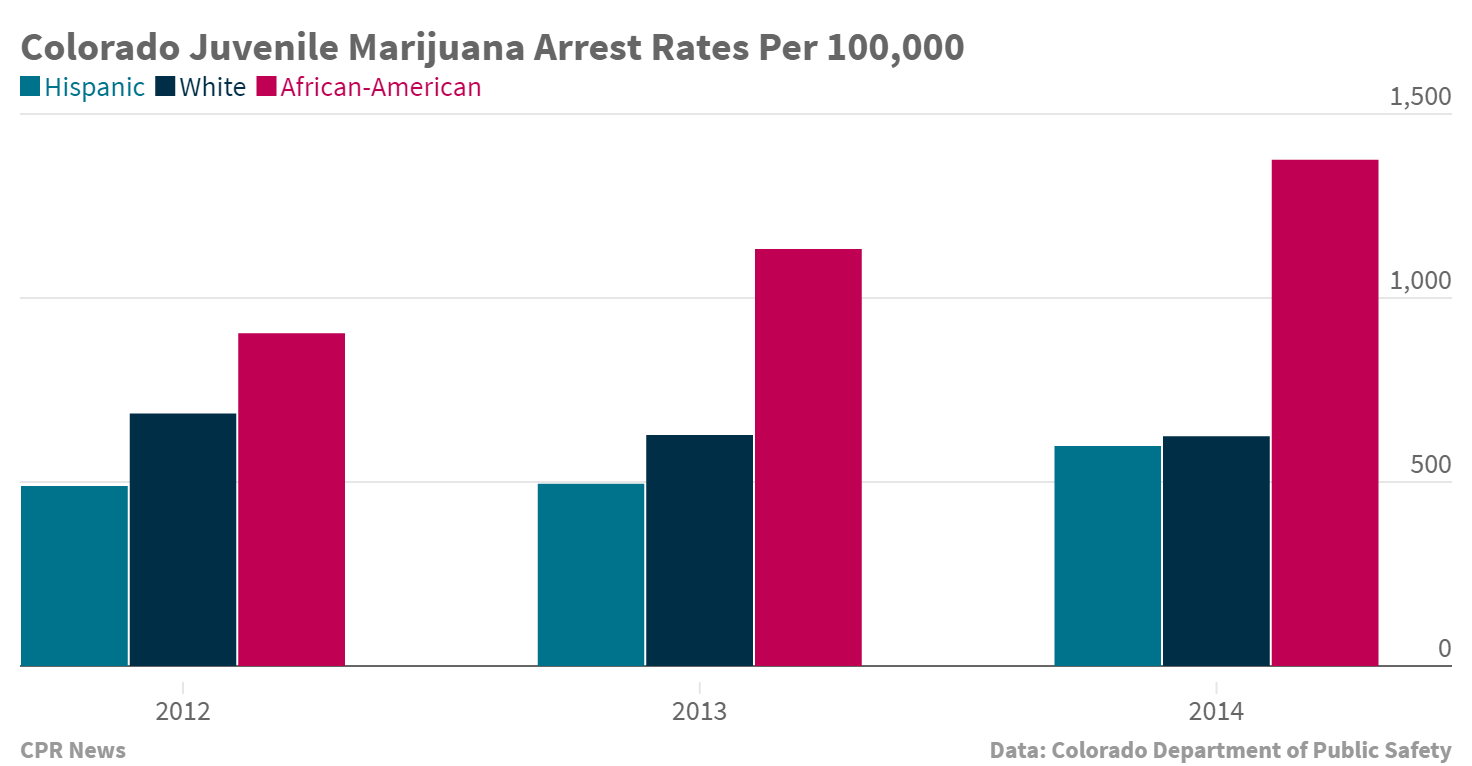 That was evident at the courthouse, where the judge heard a dozen cases before noon, and only one involved a white kid.

“That needs to stop,” says Brian Vicente led the marijuana legalization movement in Colorado. “I think a large part of the reason Colorado voters passed legalization is because they’re tired of the sort of racist legacy of the drug war.”

Vicente says it’s shameful that local police have, in his estimation, shifted their attention to minority kids.

Denver Police spokesman Sonny Jackson rejects the idea that they are targeting black and Latino kids for pot offenses.

“Most of these cases are complaint-driven,” says Jackson. “We get a complaint from someone, we’re not sure where it’s going to take us, but we have to act on it, and we’re not sure if I get a call to a residence or to a location who I’m going to encounter until I get there.”

Jackson emphasizes that marijuana is a low priority for the department. While juvenile arrests may be up for minorities, arrests for adults, of all racial groups, have been cut in half since legalization. But that means juveniles are increasingly dominating the arrest statistics. Nearly half of all marijuana arrests are juveniles, compared to 25 percent in 2012, according to a Colorado Department of Public Safety report.

Keith Humphreys, who studies drug policy at Stanford, says in general police departments don’t explicitly target racial groups. But he says the fact is that pot is illegal for kids to possess, so police have to do something when they encounter it.

He theorizes the marijuana businesses may be playing a role in who gets arrested. “The emerging legal marijuana industry is overwhelmingly white-owned, and white-dominated, and provides good access to white customers. So one possibility is that that leaves the illegal market disproportionately composed of people of color, both the buyers and the sellers.”

That’s an issue that touches Wanda James, who owns the Simply Pure dispensary, in the gentrified neighborhood of Highlands in Denver.  As a black woman, she is an anomaly in the industry, and news that minorities are being arrested at higher rates for marijuana offenses makes her angry.

“Because I sit here everyday in my dispensary, and you can hear my receptionist speaking now, we’re busy. You hear those little bells going off? People are walking in here right now...we are selling a ton of cannabis today.”

And most of her customers are white.

She makes sure to point out that this is not just a Colorado or Denver problem.

“There is not a major city, small town, rural county, city-county, outskirts, beach community that does not have this exact same problem where they’re arresting and targeting people of color,” James says.