Jefferson County, Colorado, is according to local political experts, the most important bellwether in the country. Since 2000, the suburbs west of Denver have accurately picked the next president. Women are a critical voting bloc, outnumbering men in registration.

The women who make up the Belmar Block 7 Arts District are well aware of their political power. A line of small studio art spaces in the Belmar development in Lakewood. At their monthly get-together Melissa Behr, a fine art painter, says for the politically inclined, it’s nice to live in a swing state.

“I can actually like say something, so it does kind of make a difference,” says Behr, who jokes that she tries to hide voting materials from her Republican husband.

Politically divided households are common in Jefferson County, which derives its bellwether status from the narrow split between Democrats, Republicans, and unaffiliated voters. 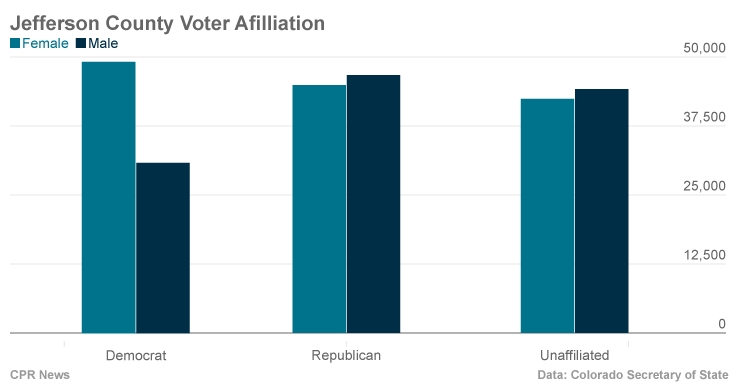 Behr, a Democrat, says it’s not so bad living with her businessman Republican husband.

“As an artist, it helps if someone in the family makes money,” she said.

If there’s a secret sauce of political politeness here, it’s that these women can identify with each other beyond politics. Things like motherhood and art connect them. That prompts Anne Van Leeuwen, a painter and a Democrat, to pose a frustrated question.

“I’d like to ask everyone here, wouldn’t we agree that this paralysis of the Senate and the Congress is just horrible?”

Behr chimes in that maybe the whole political process should be reformed.

Approving head nods from around the room, including from Lori Mastroni, a Republican, who refurbishes old furniture.

“I just want politics to chill out, and people to get along,” says Mastroni. “I can’t stand the TV and the news, I’m just so over it, it’s the bickering and the calling each out constantly.”

But the dichotomy here is depending on their political persuasion the women in this group want different things out of this election.

Mastroni says Obamacare has been a disaster. But Carrie McKenna disagrees. The sculptor and painter is a Democrat. She applauds the work on women’s issues, and she wants more, especially when it comes to the pay disparity between men and women.

“What the heck is going on here?” says an exasperated McKenna. “We’re still talking about pay equality.”

That resonates with Pat Pendleton, who’s hosting this meeting in her cozy art gallery. The Democrat argues for a strong government. Without it, she says there wouldn’t be programs she needs like Social Security and Medicare. And she wants something done about the $50,000 a year college tuition her grandson endures.

That has her worrying about the future of the middle class.

But Penny Oliver, a Republican, who runs another art studio, flips that around. She argues that government is actually killing good jobs.

“I’d like to see somebody be able to stop regulation. Stop putting businesses under new red tape,” says Oliver, who counts herself in the upper middle class. She’s proud of the charity and jobs she and her husband provide.

If this tiny, but important, slice of the electorate is aligned on anything, it’s that the presumptive presidential candidates are not an inspiring lot. Oliver points at one of the Democrats in the group.