Signatures are being counted at the Secretary of State’s office to see which initiatives will make the November ballot, and Colorado voters could have quite a few decisions to make this fall.

Twenty-four states allow citizen initiatives and very few of them use it as often as Colorado. California will take the prize for longest ballot this year, but Colorado is likely to be in the top five. This presents an issue for the groups trying to get these initiatives passed; citizens initiatives only succeed around 40 percent of the time, and a crowded ballot drives their chances even lower.

“More measures means more no votes,” said Wendy Underhill, director of the National Conference of State Legislature's elections and redistricting team. “People do skip over those that either they’re not interested in, they don’t understand, or they’re just tired and ready to get out the door. And if they’re still going to go ahead and vote, it’s no, no, no.”

Getting on the ballot here in Colorado can cost more than $1 million, but it’s cheaper than many other states.

Josh Penry, a senior vice president for consulting group EIS Solutions, said there are two other reasons why national groups in particular like to test proposals here: Colorado is a swing state, and most of Colorado’s initiatives are constitutional amendments and not just simple law changes.

This year he's part of a ballot initiative campaign to change that, by making it harder to amend the state constitution. The measure requires campaigns gather signatures from all 35 state senate districts, in contrast to rules in place now that carry no geographic limits.

In the past that has meant campaigns concentrate only on the state's biggest metropolitan areas. The measure would also require that 55 percent of voters to approve an amendment on Election Day. Currently, an amendment needs just 50 percent plus one vote.

“Put it in the constitution, it’s there forever,” Penry said. “It becomes, for a special interest, kind of a shining example that you can hold up and remarket across country. So those dynamics are all at work, and that’s why voters can expect to have long sit down with their ballot when it arrives in the mail.”

The Colorado Supreme Court struck down communities’ efforts to ban fracking, and a 2015 task force with representatives from the oil industry and environmental groups produced results that disappointed both sides. 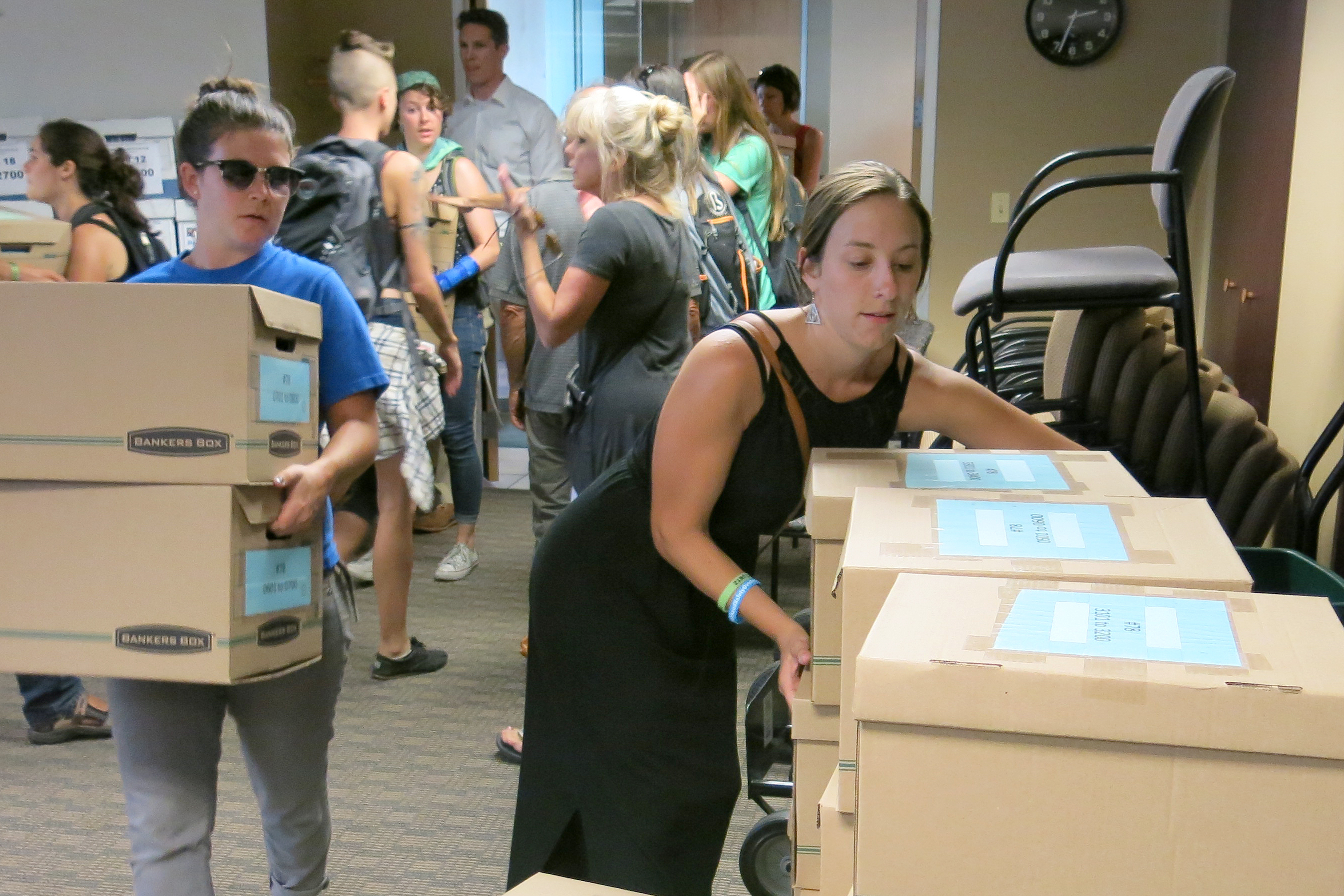 “The ultimate goal here is to restore rights back to our communities,” said Lauren Petrie, the Rocky Mountain Region Director with Food and Water Watch. “To be able to protect ourselves, our home values, our families, our health from the dangers that are inherent with fracking.”

Petrie was there to deliver the petitions, whose organization supports the two initiatives that seek to limit energy development in different ways. Ballot measure 75 would give local communities more say over oil and gas projects and the ability to ban them. Ballot measure 78 would impose a 2500-foot buffer zone between oil rigs and homes, schools and other buildings. Right now that zone is 500 feet.

“Most people I talked to said these are absolutely common sense, and I can’t believe we’re fighting for this right,” Petrie said.

Environmental groups have raised a total of $550,000 to try to get the initiatives on the ballot, and a group representing the oil and gas industry has amassed $16.8 million to stop them.

“The threat of these ballot initiatives warrants that type of response,” said Karen Crummy with Protect Colorado, a group formed to oppose the measures. She says if passed, one or both of the initiatives would be a huge blow to the industry.

“One of the major concerns though for both initiatives is that it would allow government to take private property without compensating owners,” Crummy said.

In Colorado, mineral rights are considered property rights and state law allows owners to extract resources. Protect Colorado wants to defend that right, and has spent millions in advertising against both ballot measures that would restrict oil development. It’s also behind another campaign called “Decline to Sign,” encouraging people to vote “no” on ballot issues.

“I think there’s concern in the state that it’s pretty easy to get something on the ballot,” Crummy said. “I don’t think most people object to that. But what we’re trying to tell people is that your signature is worth something."

Some environmental groups are stepping into the fight; the Sierra Club's Rocky Mountain Chapter contributed $150,000 because Director Jim Alexee says it matters to his membership.

“There’s a real opportunity here for us to face the industry, to face Goliath, and to organize and band together to do something that’s going to protect the health and safety of communities,” Alexee said.

Only one measure is officially on the Colorado ballot so far for Election Day: a single-payer health care system.

Six other measures have submitted signatures and are awaiting approval: There are two to change how Colorado conducts primary elections, another that raises the tax on tobacco products, one that raises the minimum wage, and another that allows doctors to help terminally ill patients end their lives. While the range seems mixed, they all have one thing in common.

“History has shown that often times there are issues that the legislature don’t want to tackle and the only way to bring reform about is to take it to the people,” said Elena Nunez, director of the liberal open government group Colorado Common Cause.

Examples include recreational marijuana and campaign finance restrictions, two things that couldn’t get through the legislature but won favor with voters. The citizen’s initiative essentially makes voters a fourth branch of government. Penry, who was a Republican lawmaker before he got into the initiative business, says groups can abuse the process.

“Unfortunately it can become a tool for blackmail too,” Penry said. “Give us what we want or we’ll jam it down your throat with a couple million dollars and a bumper sticker slogan.”

Penry says that can lead to hasty and poorly conceived laws, and that initiatives can act like a Trojan Horse. Rick Ridder, head of RBI Strategies, says groups are often looking for an issue with the power to turn non-voters into voters. While those are rare, Colorado Democrats recently hit on one: marijuana.

“I got at least one call from a major DNC individual who said, please get the marijuana potency initiative on the ballot,” Ridder said. That was a short-lived proposal to limit the strength of legal weed.

Ridder says the only other issue he’s seen that can really turn people out is an increase in the minimum wage, and that’s something Colorado voters may get to decide on this fall. That is, as long as they don’t give up filling out a long and crowded ballot.