Republican Party presidential nominee Donald Trump may be gaining in the Colorado polls, but not in campaign contributions. Donations to the GOP candidate stalled in August, allowing Hillary Clinton to maintain a five-to-one advantage in Colorado fundraising.

Trump collected $326,256.53 from 1,470 Colorado donors in August, down 19 percent from July, according to a CPR News analysis of Federal Election Commission data.

Trump is well behind where previous Republican presidential candidate Mitt Romney was at this point in 2012. By August, Romney had raised $7 million from Colorado, or about six times Trump’s $1.2 million. 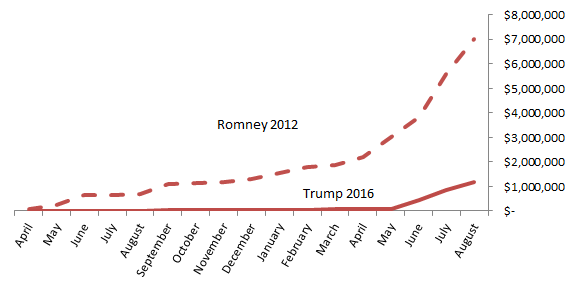 There’s still an outside chance Trump can make up ground. In 2012, Romney’s biggest fundraising months came in September and October. In fact, 55 percent of his total Colorado donations came in those last two months before the election. By the end of the campaign, Romney had raised $5 million more than President Barack Obama in Colorado.

Hillary Clinton, meanwhile, continues to do well here. Contributions to her campaign jumped 12 percent in August to $830,499.77 from 8,043 donors. She has almost exactly the same amount of Colorado money that Obama had at this same point in 2012. 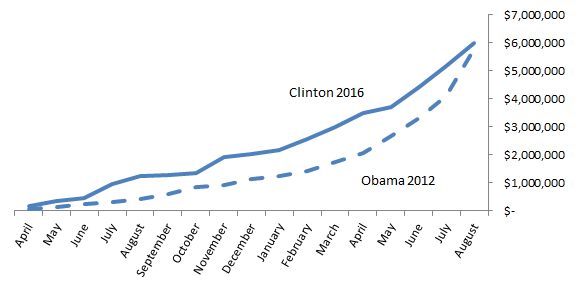 Colorado is one of the most important battleground states, but ranks just 12th in the country in presidential campaign giving (including to primary candidates), contributing a total sum of $13 million.

Editor's Note: An earlier version of the Romney-Trump chart incorrectly stated how much money Romney had raised in August of 2012. The current version is correct.