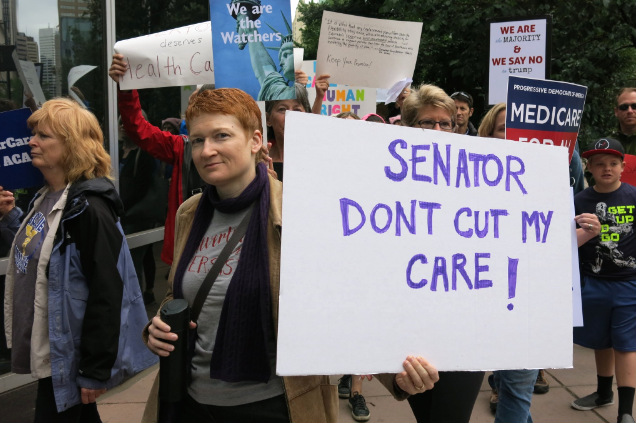 A crowd of about 100 people rallied at the office of Colorado U.S. Sen. Cory Gardner Friday in Denver, urging him to vote "no" on the Republican health bill.

Joan Hemm was among those who said the bill, made public on Thursday, will strip healthcare from hundreds of thousand of Coloradans, and millions of Americans.

Rally at @SenCoryGardner's office in Denver included CO residents who say repeal of ACA will be a disaster for them. #cohealth #copolitics pic.twitter.com/Z07RaUocNF

"This is not right. I don't know what on Earth they think they are doing to our country," said Hemm, who cares for her disabled husband. She lost her job and has health insurance through the Affordable Care Act -- Obamacare -- thanks to the program's tax credits. But she worries that repeal of the ACA will leave her without insurance.

"Why on earth would we take health care, that we finally have established for all Americans, and break it up to give tax breaks to the rich?" Hemm said. "Are we to die in the streets?"

As NPR has reported, here are the major parts of the Senate bill (the House previously passed a similar version):

Maria Guerrero, a single mother and Lyft driver from Aurora, was also at the demonstration. She says her 3-year-old daughter got care through with Medicaid after suffering pneumonia and an intestinal tumor.

"It gets to me, because I can't imagine somebody would choose to pass a bill that's going to cut many people off."

Rachel Graves, a lawyer who has struggled with headaches so severe she couldn't work out got insurance through the Medicaid expansion, said the GOP bill rolls that benefit back and she's not sure what she'll do without it.

"It's kind of unthinkable.  I think I'll be luckier than a lot of people," she said. "It's gonna be like a race against the clock of can I get well in time to have a job, before I can no longer get insurance."

Gardner is one of 13 senators who gave input on the bill behind closed doors -- and the only one whose state didn't go for President Trump. But he was quoted widely Thursday seeing that he hadn't seen the bill's final language until it was made public Thursday.

"I am beginning to carefully review it as we continue to look at ways to rescue Colorado from the continued negative impacts of the Affordable Care Act on our healthcare system," he said. "This deserves serious debate, not knee-jerk reaction.”