But with opioid abuse claiming lives in Colorado and across the country, oral surgeons and other health care providers are looking to alternatives. Lafayette oral surgeon Curt Hayes recently switched to FDA-approved local anesthetic Exparel, a non-opioid. When he injects it into his patient's’ gums the area will stay numb and pain free for two to three days.

He can now generally remove wisdom teeth without using any narcotics for pain — so there’s no need to prescribe his patient a dozen or more pills.

“I've backed off to where I don't give any narcotics whatsoever,” said Hayes. “I have people just using ibuprofen and then over-the-counter Tylenol, and that's acceptable. And it takes care of the pain.”

Hayes followed the development of Exparel, also known by its generic name bupivacaine, in journals. Other doctors started using it for C-Sections. He started using it mainly for patients who had abused narcotics in the past, to avoid relapses. After seeing positive results, Hayes started making it an option for all his patients.

“We need to be looking at every aspect of the opioid crisis,” Hayes said.

Make no mistake, there is a crisis. Drug overdose deaths are taking a greater and greater toll in Colorado — in 2016, a record 912 people died from an overdose, according to data recently released by the state health department. 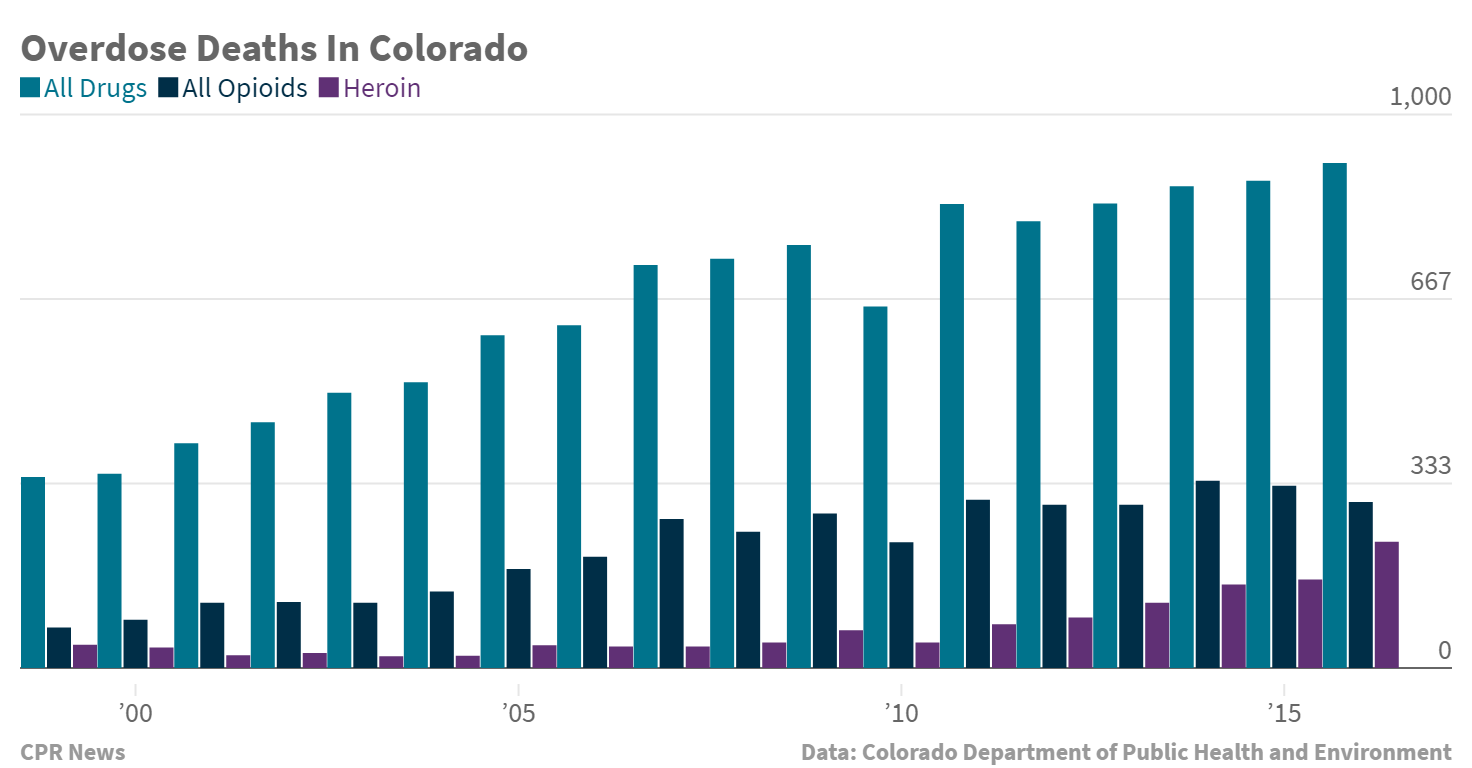 In that same year, 300 people died from an opioid overdose in Colorado. Opioid use often leads to an addiction to heroin, which claimed another 228 lives. Taken together, those two causes now rival deaths from diabetes, car accidents, or chronic liver disease.

“Opioids ought to be drugs of last resort, not drugs of first choice,” said Robert Valuck, coordinating center director of the Colorado Consortium for Prescription Drug Abuse Prevention. Valuck, a professor at the University of Colorado Schools of Pharmacy, said medicine cabinets that contain leftover pills are often the gateway to an opioid addiction.

One strategy to combat that is to reduce the number of pills doctors prescribe in the first place, Valuck said.

Colorado’s dental board is developing new best practices and the Colorado Dental Association is holding educational seminars. Dr. Brett Kessler, a dentist in Denver and past president of the state association, said across the board, medical providers are re-examining their role in the opioid crisis.

“It’s on every health care practitioner's mind,” Kessler said. “Looking for alternatives to manage the pain is huge, and it’s a growing trend nationally.”

Kessler notes many teens and young adults get their first exposure to the narcotics when they get wisdom teeth removed. “There’s studies out there that show if you give more than a three-day dose of opiates they’ve got a much higher chance of becoming addicted later in life,” Kessler said.

Like any drug, Exparel comes with warnings and potential side effects. For example, the website Drugs.com urges that to “make sure Exparel is safe for you,” patients should tell their doctors if they have ever had liver disease, kidney disease, heart disease, a heart rhythm disorder or seizures. Possible side effects include nausea, vomiting or constipation.

Patient Paula Ryan was in Dr. Hayes office recently for a tooth extraction. They discussed her pain management options and she choose the non-opioid alternative.

She’s a mom, and remembers having another dental surgery years ago. Then she was prescribed opioids for pain and was pretty out of it for a few days. She prefers the alternative.

“I was wide awake and I could do whatever I needed to do and I was there for my daughter,” Ryan said. “It’s a much better outcome.”

Exparel costs between $250 and $400, and Dr. Hayes said it is not covered by insurance. But potential cost didn’t keep patient Flora Brewington from choosing it. She’s an MD, practicing family medicine, and opted for the non-opioid method to manage her post-operative pain. “I can’t think of a disadvantage other than having to pay out of pocket,” Brewington said.

Plus she’d rather not have any extra pills forgotten in some medicine cabinet, just waiting to be discovered. “I have two little kids at home and it’s best not to have narcotics sitting around,” Brewington said.

Experts say it’s that kind of awareness, from both medical patients and providers, that’ll be crucial to turning the corner on the opioid crisis.