There’s never been anything quite like Colorado’s 2018 primary race for governor. In the end, it cost $34.7 million, with about half of the contributions coming from the candidates themselves.

Democratic nominee Jared Polis led the way, digging into his own wallet for an unprecedented $11.3 million. He spent nearly all the money on the primary. His campaign has just $228,268 left, but Polis, a multi-millionaire, can write a check to replenish his coffers overnight. 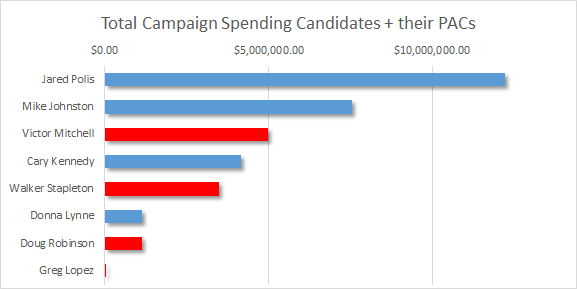 The party’s choice did receive an assist from at least two outside groups. Almost $1 million was spent on his behalf by Sierra Club’s independent expenditure committee and by Bold Colorado, an IE committee primarily funded by the Gay & Lesbian Victory Fund.

Polis and the PACs supporting him spent almost as much as all of his Democratic challengers and their PACs combined. Next closest to Polis was Democrat Mike Johnston, who spent $2.3 million, but also got a huge assist of $5.23 million from Frontier Fairness, his Super PAC. Johnston finished third in the Democratic primary voting.

Cary Kennedy and her Super PAC, Teachers for Kennedy, raised $4.2 million. The lionshare of her contributions to the PAC came from Emily’s List, which aims to elect women, and the National Education Association, the nation’s largest teachers union. Donna Lynne raised just $1.1 million, and didn’t appear to have any PAC support.