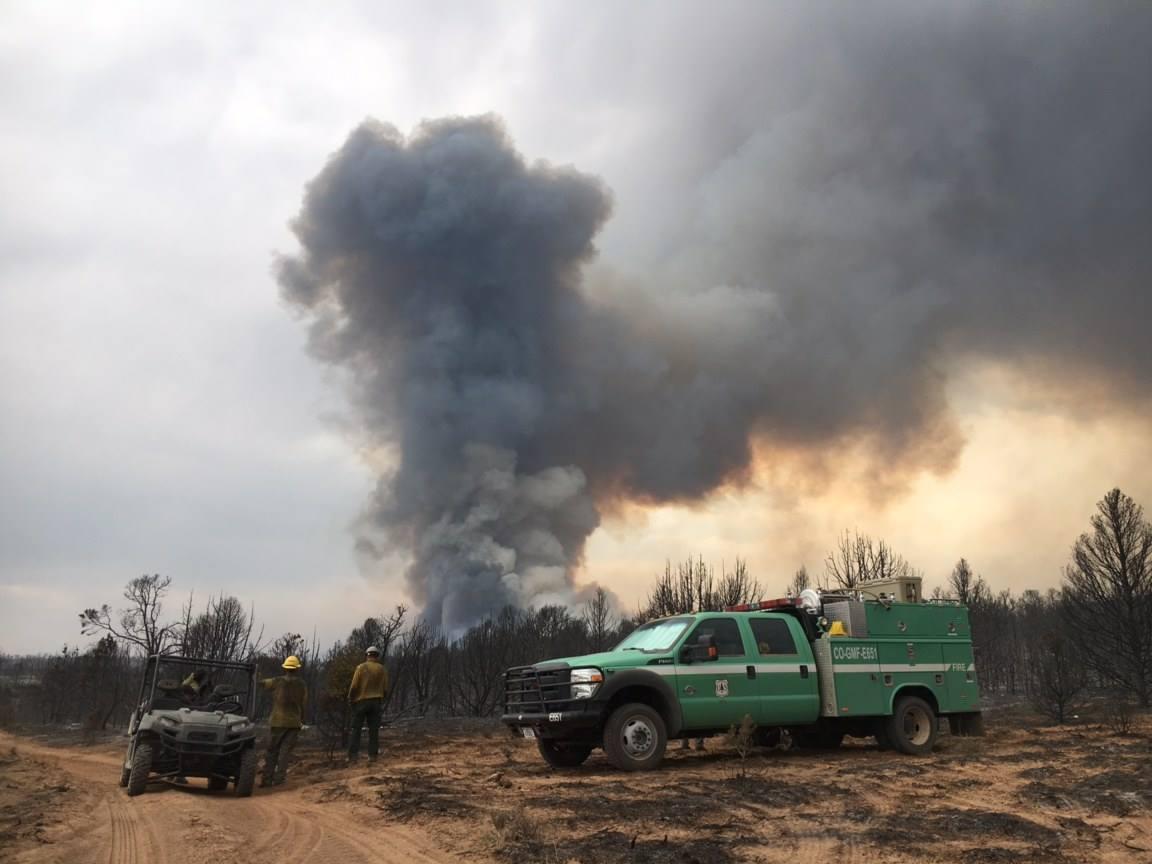 Smoke from at least 12 wildfires fires burning across Colorado and beyond continues to hang over large parts of the state. Periods of moderate to heavy smoke are expected. State health officials warn that people with respiratory illnesses, the very young and elderly may want to remain indoors if the smoke is heavy.

Here are the latest updates on fires burning across the state.

All forest and BLM lands west of Main Marvine trail and drainage were closed Thursday afternoon because of Cabin Lake Fire activity, according to the White River National Forest’s Facebook page. The closure includes the entire South Fork drainage and all associated trailheads and campgrounds. All forest land east of the West Fork of North Elk Creek and south of Buford and Lake Avery to the Blanco District Boundary are also closed. Rio Blanco County Road 12 and the Main Marvine Trail was not affected. 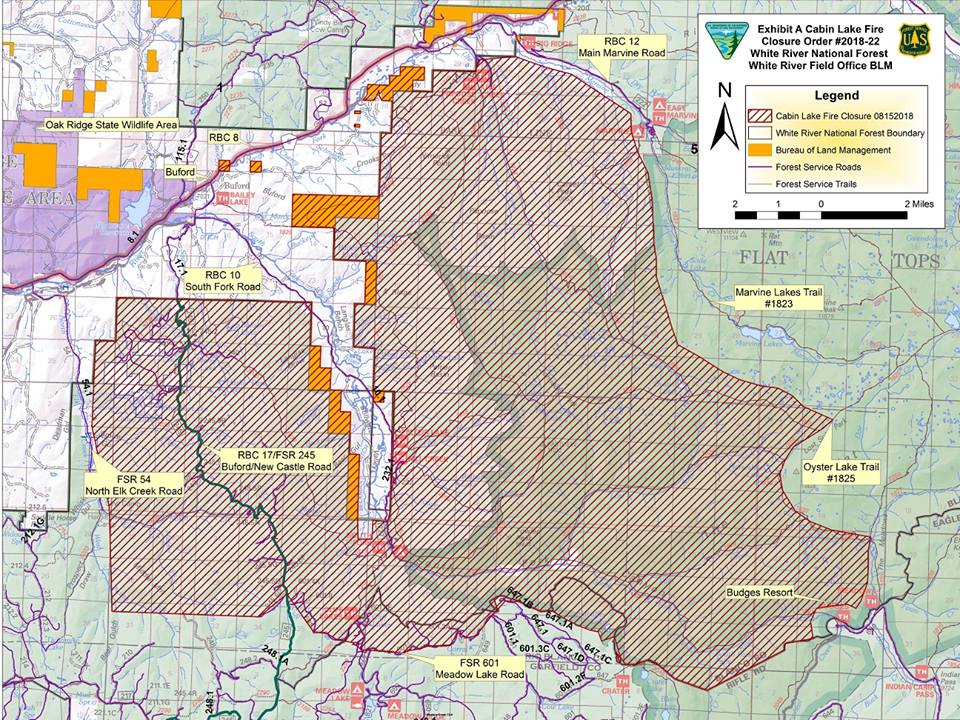 The fire burned 5,188 acres and was 29 percent contained Friday morning, according to the Sheriff’s Office’s Facebook page.

Other restrictions and closures:

Smoke columns on were more than 23,000 feet high. The fire may be seen from Garfield, Eagle, Summit and Routt counties. Cabin Lake Fire is burning about 5.5 miles from Buford and 7 miles northwest of Meadow Lake Campground near Meeker.

For more evacuation information call the Rio Blanco Sheriff’s Dispatch Center at 970-878-9600 or sign up for their alerts.

The Silver Creek Fire was active to the north and south Thursday evening. It spread east toward 131 Road on the north end and moved east between Latigo Rand and the Old Park subdivision on the south side, according to Grand County Sheriff’s Office. 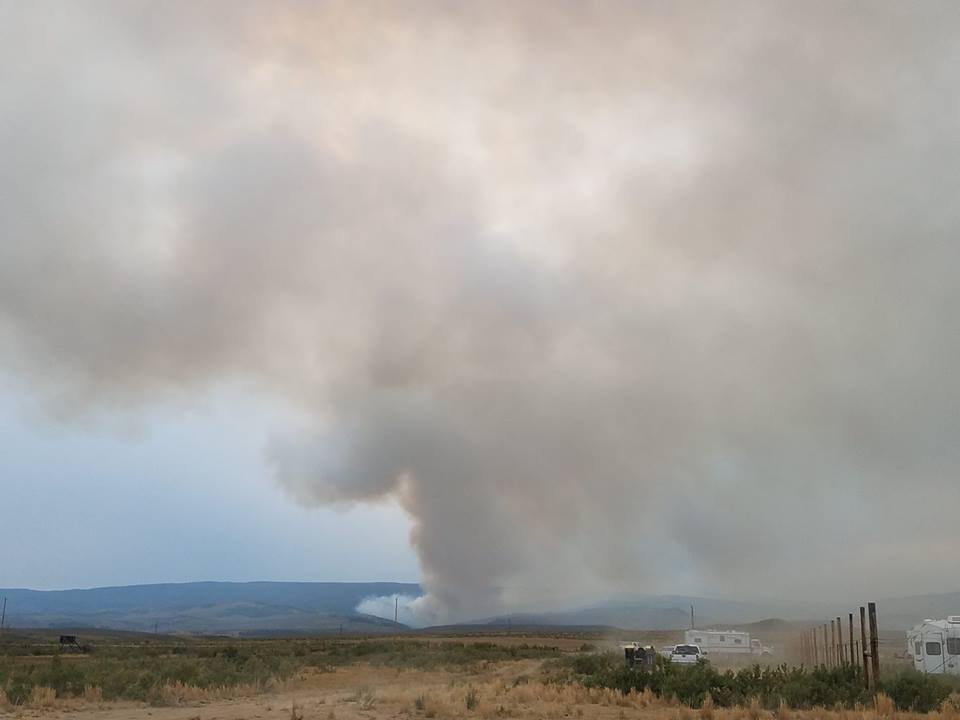 A Red Cross Shelter was set up at West Grand Elementary School at 715 Kinsey Ave. An informational sign up was be available at an Emergency Medical Station at 1003 Eagle Ave.

Structure protections teams will be in the Latigo Ranch area Thursday. Lt. Dan Mayer of the Grand County Sheriff's Office told KUSA-TV that about 30 guests, 15 to 20 employees and some horses left Latigo Ranch late Monday.

The Bull Draw Fire grew to 28,000 acres by Friday morning and was 21 percent contained, according to the fire’s Facebook page, managed by Bull Draw Fire staff in Nucla. 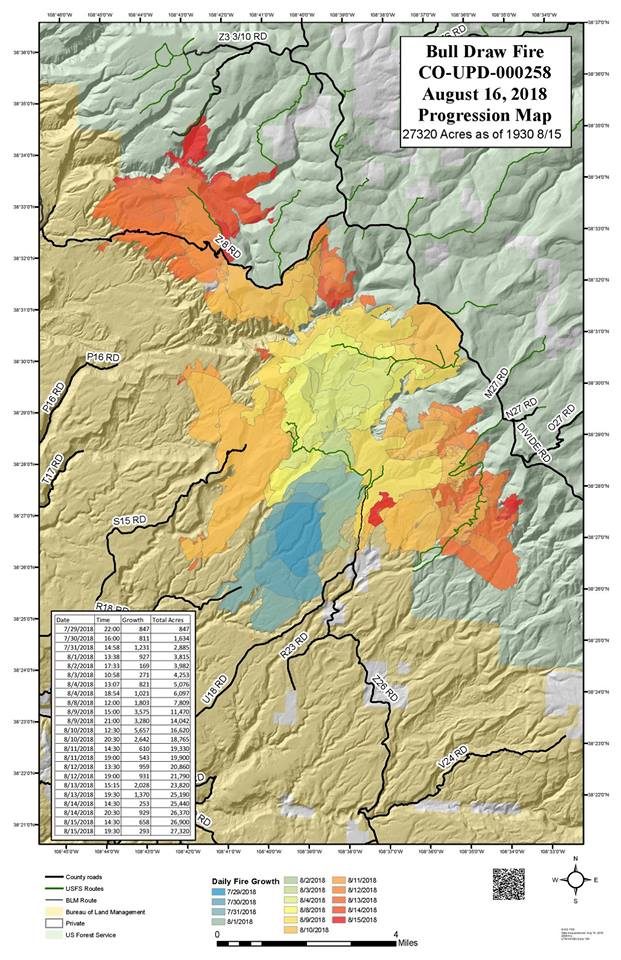 The fire has grown about 3,000 acres since Tuesday and is the 17th largest wildfire in state history, according to the Denver Post.

The fire was burning 12 miles northwest of Nucla on the Western Slope close to the Utah border. It started on July 29 from a lightning strike.

The Lake Christine Fire was more active on Wednesday afternoon due to warm temperatures and low humidity, torching unburned fuel within the fire perimeter.

After over a month of firefighting operations, the Lake Christine Fire continues, burning 12,588 acres, according to Inciweb. The fire is 90 percent contained and is burning 1 mile away from Basalt near Fort Garland.

Warm and dry conditions make fighting the fire difficult, officials there say. But the potential for the fire spreading is minimal at the moment

The Lake Christine Fire began July 3 and spread rapidly on July 4, destroying three homes. Authorities said the fire started by using tracer rounds at a firing range. Two suspects in their 20s turned themselves in on July 15.

The 25-acre brush had fire shut down I-70 in both directions for several hours Tuesday afternoon near De Beque Canyon.

The fire is believed to be started by a cigarette, said Megan Terlecky, spokeswoman for Mesa County Sheriff’s Office.

“Conditions are so dry that it took off quickly,” she said. “We cannot stress how severe the fire danger is out there we had we had a ton of resources on it very quickly to get a handle on it.”

The fire was reported around 11:30 a.m. Tuesday and it jumped the interstate. I-70 reopened later around 4:30 p.m., causing an hours-long delay for drivers. This was the second time this year that section of the highway has been closed because of a fire, Terlecky said.

The Cache Creek Fire was 40 percent contained and has burned 2,520 acres by Friday morning, according to Inciweb. Winds caused a spot fire across fire lines on the northwest edge of the fire above Cache Creek Road on Sunday night. The fire was 60 percent contained before the fire spot, but the darkness, intensity of fire and terrain made it unsafe for firefighters to pursue it.

The Red Canyon Fire, 30 miles south of Rangely, burned 5,722 acres on Friday morning. The fire was 100 percent contained, according to Inciweb. Public lands in Rio Blanco and Garfield counties were temporarily closed on Aug. 1 by the Bureau of Land Management but were lifted late Tuesday morning. The fire started July 29 by lightning. 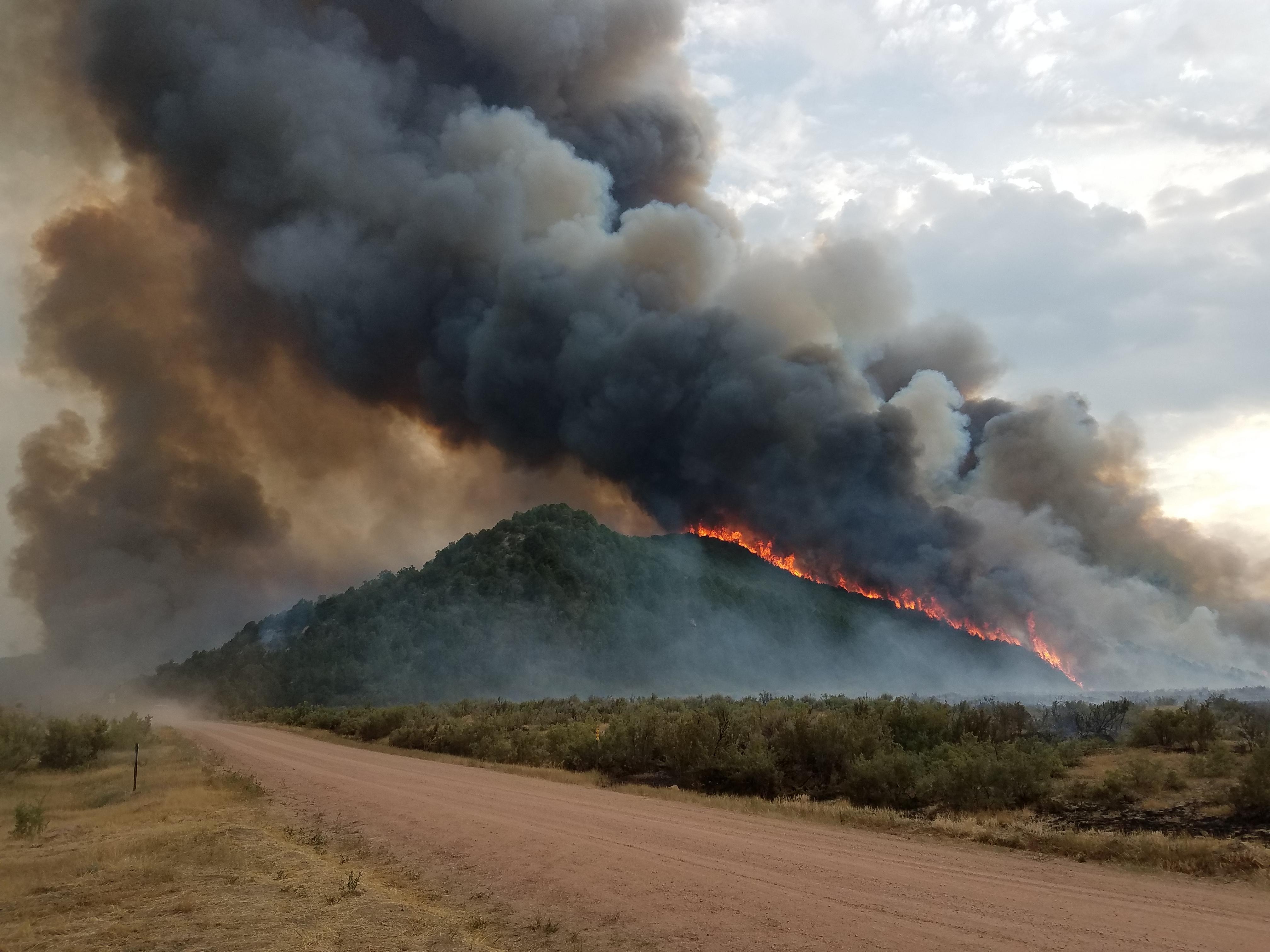 The Moccasin Mesa Fire has burned 185 acres near the Southeast boundary of Mesa Verde National Park. The fire is 100 percent contained, according to InciWeb. It was reported by Park Point Lookout on Aug. 4 and was caused by lightning.

The Plateau Fire in the San Juan National Forest northeast of Dolores and the McPhee Reservoir has burned 19,554 acres and was 95 percent contained on Thursday morning, according to Dolores Ranger District. Firefighters were working on the northern edge of the fire where a few small sections were uncontained. The fire has been burning since July 22 and was caused by lightning.

The Plateau Fire on #SanJuanNF is 93% contained and the Dolores-Norwood road, Boggy Draw road and House Creek roads are open as well as the Dolores overlook trail. The map below shows the new Plateau Fire closure area. pic.twitter.com/9YLIRr7m0X

The Green Mountain Fire, burning 25 miles southeast of Gunnison, was 100 percent contained. Fifty-three acres burned, according to a news release from the U.S. Forest Service. The cause of the fire is unknown and no damages were reported.

The Sugarloaf Fire burned 1,280 acres and was 35 percent contained by Aug. 10. The fire is 13 miles southwest of Fraser and was started by lightning.

The Buttermilk Fire, burning in the Gunnison Gorge National Conservation area, burned 748 acres and was 70 percent contained Aug. 8. The C77 Road was closed to the public. Smoke may be visible in Delta and Montrose counties.

The West Guard Fire, burning 13 miles east of Dove Creek, northwest of Dolores, was caused by lightning. It was 100 percent contained and had burned 1,424 acres. The fire was started by lightning and was discovered by a helicopter working on the Plateau Fire.

Correction: A previous version of this story incorrectly stated who manages the Bull Draw Fire Facebook page. Bull Draw Fire staff in Nucla and assigned to the fire manage the page.