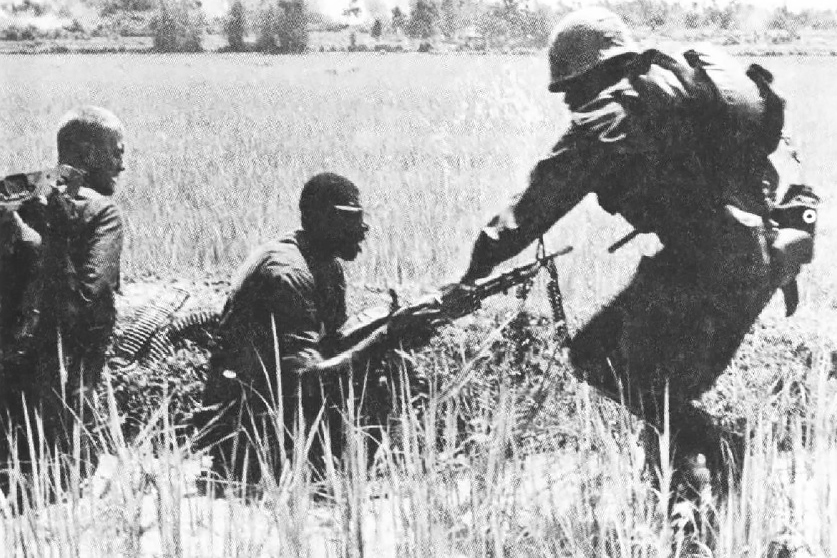 On a hot summer night 50 years ago, while other U.S. troops were fighting in Vietnam, dozens of Marines on Camp Lejeune, N.C. were fighting each other.

The explosion of racial violence on the Marine Corps’ main East Coast infantry base left one white Marine dead and more than a dozen others injured − some seriously. Dozens were charged with crimes, including homicide.

There had been outbreaks of racial violence in military jails, but this was a major escalation.

“Lejeune is really the first major racial gang fight in the military,” said history professor James Westheider of the University of Cincinnati Clermont, author of Fighting on Two Fronts, a book on African American troops during the Vietnam war. He said racial violence later broke out at bases in Tennessee, Hawaii, and elsewhere.

“So in many ways, it’s really the prototype of what the military is going to go through in the next couple of years,” Westheider said.

After the Camp Lejeuene riot in July 1969, tensions on the base reached the point where even seasoned combat veterans were afraid to walk around at night. A month after the violence broke out, NBC News correspondent Robert Goralski visited the base and reported that racially-mixed patrol teams had been created as part of efforts to prevent more trouble.

“Large secluded areas have been illuminated with flood lights and all outside lights are kept on until dawn,” Goralski reported.

Retired Massachusetts ironworker Robert Jeannotte, who is white, was a young Marine stationed at the base then. He and friends had been at a bar on base watching television coverage of the moon landing.

“There were four or five of us walking back from the from the enlisted man’s club, back to our barracks,” he said in a recent interview. “And about 40 black marines came around the corner. And all hell broke loose, so to speak.”

One of the men with him was knocked down, kicked, and badly beaten.

It went even worse for others. Half a dozen attacks broke out that night as groups of rioters roamed the base.  A 20-year-old white corporal named Edward Bankston, who had been wounded several times in Vietnam, was beaten to death. Two other white Marines were stabbed.

The Marines Corps arrested those suspected of participating in the riots. Then the military and a Congressional committee began trying to understand why the riot happened and how to lower racial tensions, which had been rising across the U.S. military for years.

‘Most of them were on edge’

By the time of the riots, Westheider said, much of the force had been drafted. Black troops were no happier about that than their white counterparts, and they also had to deal with institutionalized racism in the military.

They wouldn’t call you Private Robertson,” he said. “With a black, they might say, ‘Hey, splib, come here!’ And I’m like, what’s a splib? But the guys from up north, they knew what it was. They would say ‘They’re calling you an N-word.'”

Robertson was badly wounded in Vietnam and had been sent back to Lejeune to recuperate. He was there when the rioting broke out, but didn’t hear about it until afterwards. It didn’t surprise him, given the tensions among black Marines.

“It didn’t take much to set blacks off then,” Robertson said.

Westheider said that by the summer of 1969, black troops everywhere were on the same hair trigger.

“When King was killed, you see a profound change come over a lot of the African Americans serving in the armed forces,” he said. “All of a sudden the person they had looked up to, that had brought so much change in such a short period of time, had been killed again by a white racist society.”

The reactions by some white troops exacerbated the tensions.

“At Cam Ranh Bay [Vietnam], whites spontaneously made Klan uniforms and paraded with a Confederate flag when they heard the news,” Westheider said. “And there were other instances of groups of whites being overly joyous over the assassination.”

Despite the rising tensions, the Camp Lejeune riots caught military leaders off guard. The services had been desegregated for years, and Westheider said military leaders seemed to be unaware that institutionalized racism remained a problem.

“In fact, if you look at the Department of the Army’s official report in 1968, they actually bragged that they had eliminated racism from the armed forces,” he said. “So they did not assume early on that they were causing their own problem.”

The Congressional and military panels made recommendations to reduce racial tensions, but changes were slow to come. Eventually, reforms were made to the military justice system, which had been significantly harder on black troops.

The Pentagon also made a major effort to increase the number of black officers, which had averaged only about two percent during the Vietnam War. Robertson, the black Vietnam combat veteran, said that was crucial. He rememberd that during his time in the Marine Corps, a white officer had been surprised at his relatively high rank and tried to get him busted down.

“The Marines, they weren’t too cool with blacks being especially in leadership positions,” he said. “They didn’t want any blacks to be able to tell a white soldier, give him orders, tell him what to do.”

The Pentagon also made more subtle changes, like adding hair care products, music and magazines that African-American troops asked for to the shelves of PX stores. The military also began to mandate race relations training. And it began pressuring career troops to fall in line with the new thinking.

In the end, he said, the military did a pretty good job of improving race relations, though white nationalism in the military is still a problem.

“But conditions today in the armed forces are immensely better and more egalitarian than they were during the Vietnam War,” Westheider said. “You have a lot more people of color and women in senior leadership positions, and that’s going to change the culture of the military.”