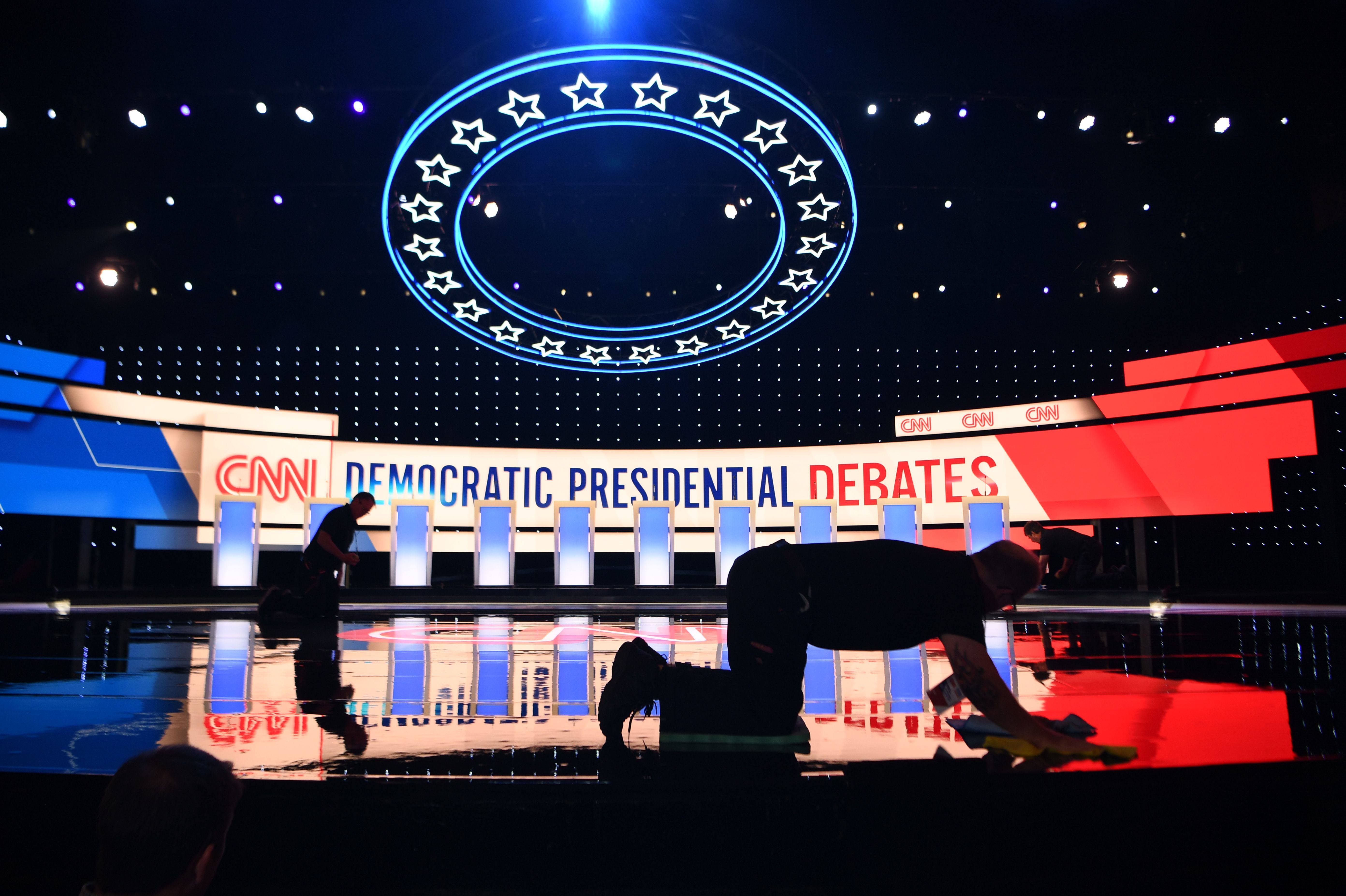 The first leg of the second round of Democratic presidential debates is over, and now it's on to Night 2.

Center stage features former Vice President Joe Biden, who has a lot on the line. Sen. Cory Booker of New Jersey has been promising attacks on Biden's racial justice record, and Biden is promising to not be as "polite" as he was in the last debate. Night 1 also drew a bold line between moderates and progressives onstage.

Expect health care to be a big issue, as it was on Night 1. Sen. Kamala Harris of California unveiled her "Medicare for All" plan on Monday, presenting a middle ground between more progressive candidates' stances looking to replace private health insurance and that of Biden, who wants a public option.

When is the debate?

Which candidates are onstage Wednesday night?

How can I watch?

Tune in to CNN, or listen on Westwood One radio.

Now, here are five questions about what we might see in the debate:

1. Does Biden recover, and can he deal with the inevitable questions on race?

Biden's last debate was not a good one. He said he was unprepared for attacks from Harris, whom he considered a friend. And he didn't expect the line of attack — on busing in the 1970s. On Wednesday night, he will be sandwiched between Booker and Harris, and candidates are expected to come at Biden from all angles. He has to acquit himself better — whether it's on race, health care or any other topic — or his electability bubble could burst.

Biden has recovered some from his poll slide after the first debate, but he needs a solid showing. If he doesn't have one, it could leave permanent doubts — even with voters who like him — about whether he still has what it takes to take on President Trump.

The first 10 candidates discussed race on Tuesday night in Round 1, but it was an all-white stage, and the candidates spent little time on the topic.

2. How far will Gillibrand go in hitting Biden on women's rights — and how does he respond?

Struggling candidates saw what it took in the last debates for others to get attention and rise in the polls: interjecting and going on the attack. Enter Kirsten Gillibrand.

She has reportedly been prepping attacks on Biden's record on women's rights, including his 1981 vote against expanding the child tax credit. And last Thursday she went this far on the campaign trail in Iowa:

"We have Democratic candidates running for president right now who do not believe necessarily that it's a good idea that women work outside the home," she said in Iowa. She finished it off with a Biden kicker: "No joke."

Biden would likely counter that he wrote the Violence Against Women Act and that those attacks are unfair and out of bounds. But he will face the challenge of hitting back without looking disrespectful — in a Democratic primary — of women and candidates of color.

For Gillibrand's part, she may be asked to respond to the regrets of fellow senators who called on then-Sen. Al Franken of Minnesota to step down amid sexual misconduct allegations. Gillibrand was at the forefront of calling on Franken to step down at the height of the #MeToo movement.

3. How does Harris answer for her health care plan?

Critics could argue that the California senator had been somewhat wishy-washy on where she stood exactly on Medicare for All — until this week. She unveiled her own plan, which envisions a role for private health insurers, breaking from progressives like Vermont Sen. Bernie Sanders, who would replace private health insurance with Medicare.

All that, despite Harris co-sponsoring Sanders' legislation. She is likely going to be asked what changed and be challenged by fellow candidates for trying to be all things to all people. Harris was able to distinguish herself in the first round of debates with an incisive busing attack against Biden, but as she rises, Harris will also likely be targeted — and there are plenty of things the progressive left doesn't like about her record, including not just her record on health care but her time as attorney general of California.

4. How does Castro fair — and whom does he go after?

Castro used O'Rourke on immigration to get himself some momentum in the first debates. But O'Rourke won't be onstage with Castro this time, and Castro is in desperate shape. So far, he has not qualified for the fall debates, so there's a lot of pressure on him to perform well.

Castro, who has met the donor requirement but not the polling one, became a champion of marginalized communities in the first debate. But will he find another potential foil — and on what issue — this time?

Castro is in a similar position as Yang, a tech investor championing a universal basic income of $1,000 a month to combat automation. Yang has also met only the donor threshold and not the polling requirement, but he got limited time in the first debate. He also needs to become better known to make the fall debates.

And that's to say nothing of the candidates who have not met either requirement yet — like those on Wednesday night's stage, including Bennet, de Blasio, Gabbard, Gillibrand and Inslee.

Castro did distinguish himself in the first debate but on areas that the latest NPR/PBS NewsHour/Marist poll found to be not so attractive to a general-election audience, like decriminalizing border crossings, for example.

In fact, multiple policies that Democratic candidates have been pushing may be popular with the Democratic Party's base but not with the overall electorate. Democrats are walking a fine line, because even base voters are saying they want someone who can beat President Trump, not necessarily someone who agrees with them on every issue.