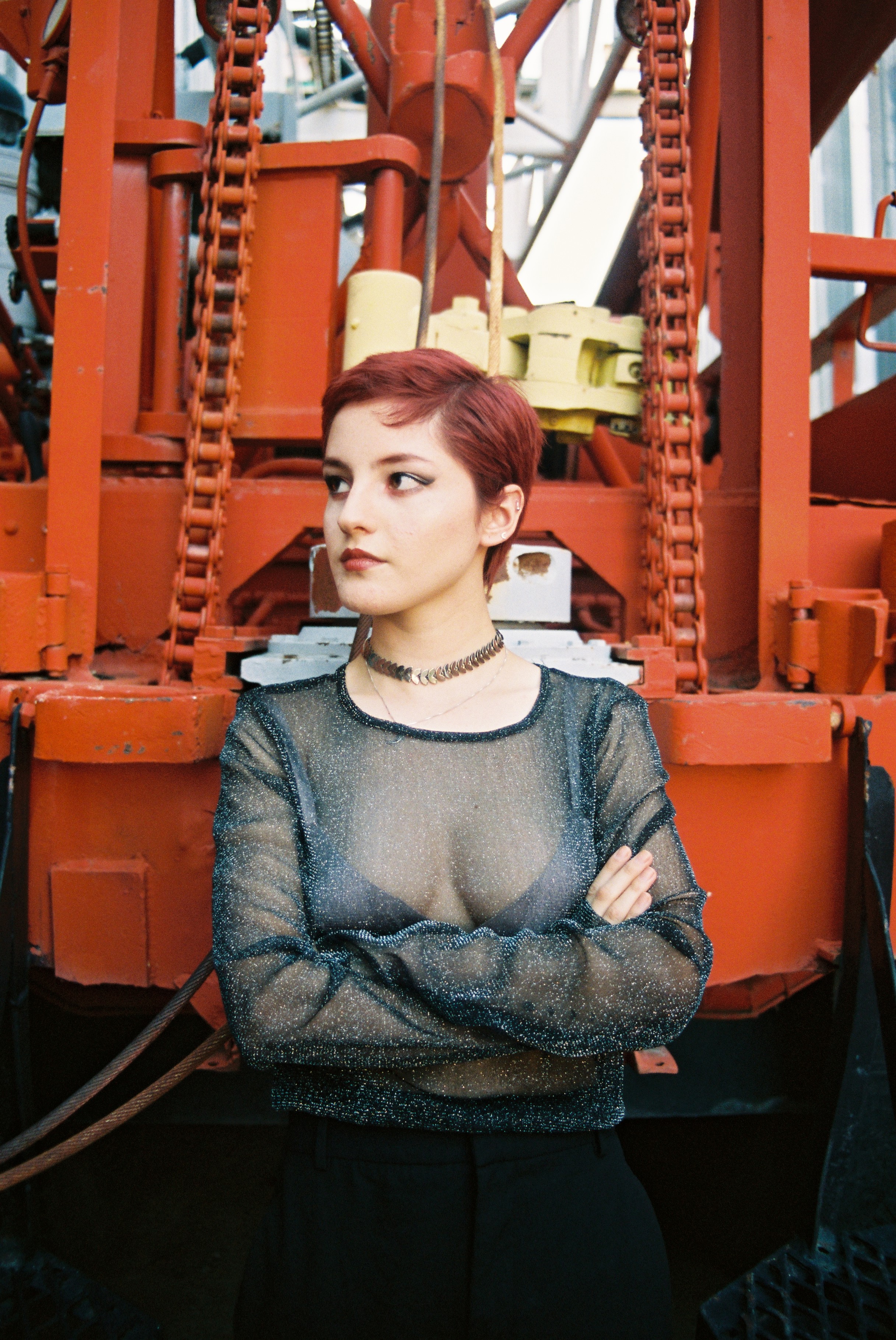 Alyssa Pabers/Courtesy of the Artist

We play Colorado music every hour and The Local 303 spotlights the best from emerging and beloved artists in our scene.

Hometown: Denver
Formed: 2015 (solo), 2017 (band)
Latest Release: Call Me EP (April 2018)
About: Ashley Koett makes indie pop influenced by music ranging from jazz to synth pop, citing inspiration from Fishmans, Arthur Russell, Stereolab, and Joao Gilberto. Originally a solo artist from Texas, she now performs in Denver with a four-piece band. She has a single coming out in the fall and an album coming out soon after.

Hometown: Greeley
Formed: July 2013
Latest Release: The Slip/Forever In Love via Color Red (July 2019)
Next Show: Ophelia's Electric Soapbox on October 25 as "The Burroughs Celebrate Woodstock," featuring their take on some tunes from the iconic festival.
About: Steeped in classic soul standards and outfitted with modern flair, The Burroughs are a nine-piece band with a powerhouse sound. Since 2013, the band has lit up stages with their trademark brand of “Sweaty Soul Music,” quickly earning their rightful place as one of the best live bands in the region. 303 Magazine has called their newest release "a funk-focused, witty complimentary pair of tracks that are like nothing you’ve ever heard in decades." The band has opened for national acts including The Motet, The Steve Miller Band, Dirty Dozen Brass Band, and The Main Squeeze.

Hometown: Denver
Formed: 2015 with four members, grew to nine members in 2017
Latest Release: Self-Titled via Don Cheech Discos (February 1, 2019)
Catch Them Live: Sunnyside Music Festival featuring members of Su Teatro's Northside on September 14 and at Goosetown Tavern for Territorio Liberado - immigrant rights fundraiser for Casa de Paz and Metro Denver Sanctuary Coalition on October 18.
About: Don Chicharrón is a band whose blend of chicha (Peruvian cumbia with roots in popular music of the 1960s and 1970s that incorporated psychedelic rock and Andean folk music), metal, spaghetti Western and other musical forms is lively and fluid for a group of nine people who come from disparate musical backgrounds. Anyone that has been able to catch the group live knows it’s musicianship is expertly integrated so it never feels like anyone is doing too much at once. The group’s debut, self-titled full-length sounds like the soundtrack to the Love and Rockets comic series in its multi-cultural aesthetic and ineffable sense of the futuristic. -Tom Murphy

Hometown: Pueblo
Formed: 2005
Latest Release (Singles): "I've Been Waiting" (April 18, 2019) and "I'm Away" (March 2, 2019) via Blank Tape Record
Catch Him Live: Broadway Roxy on September 28
About: As a solo performer, Inaiah Lujan’s sound has been described as melodic, chill and vibey ─ cathartic and heartbreaking. Lujan's material is raw and vulnerable. Equipped with a gentle yet powerful voice, vivid songwriting and an understated mastery of the six-string guitar, Lujan croons and swoons, winning the hearts of crowds everywhere. Drawing inspiration from 50's and 60's pop, rock 'n' roll, doo-wop, classic country and Folk, R&B and soul, Lujan's music would feel right at home in a mix with artists such as Devendra Banhart, Jim James and Weyes Blood. Aside from solo performances, he writes songs, sings and plays guitar in bands who tour regionally and nationally including; The Haunted Windchimes and in/PLANES. Lujan is currently working on a new solo album, producing and mixing albums for Cincinnati-based band The Harmed Brothers, Colorado Springs band Briffaut, and mixing songs for a new Mike Clark & The Sugar Sounds record and EP.

Hometown: Denver
Formed: 2011
Latest Release: Cathedrals via Instant Empire, LLC (June 14, 2019)
Next Show: November 2 in Fort Collins at CSU's Stadium Sessions (before their home football game with UNLV)
About: Instant Empire's music often focuses on humanity in the modern world. Many of the songs paint pictures and read like short stories, while others scan more like fractured, impressionistic poetry. Cathedrals, the band's third LP, expands upon the sound and tone the band has meticulously refined over the last decade.  The majority of the LP was written in 2018 as part of IE’s 12x12 project where the band wrote, recorded and released a new song every month for the entire year. The search for human connection is the central theme that permeates throughout Cathedrals - an album full of the richest characters the band has ever created. Instant Empire as a band often defies easy categorization, sometimes oscillating dramatically from melodic indie pop to aggressive indie punk (often within the same song).  The songs that comprise Cathedrals are a refuge of solace and, hopefully, a place where listeners can go to feel connection to something - anything - that is bigger than the world they've created.

Hometown: Originally from Lewiston, Idaho and now resident of Denver
Formed:  2012
Latest Release: Everything is Gonna Work It’s Own Self Out, self-released (8/23/19)
Catch Them Live: Jay plays in two other bands that will be in town on September 5 (Fruition at Red Rocks) and September 28 (TK & The Holy Know Nothings at Cervantes')
About: Music magnifies the human condition, highlighting both daily struggles and personal triumphs with the same sensitivity and sympathy. Jay Cobb Anderson accepts the responsibility of such sonic discourse via his solo output. Moreover, he deciphers these universal experiences in the form of hummable, hypnotic, and heartfelt anthems steeped in storytelling folk tradition and amplified by unabashed rock ‘n’ roll energy. He developed a knack for such writing via his downright prolific career thus far. Not only did he co-found folk rock phenomenon Fruition, but he also launched groups such as The Bell Boys and Rose City Thorns. His growing catalog includes 10 albums and multiple EPs, while he’s logged hundreds of gigs since launching his career in 2007. He served up his first solo offering, I’m a Rambler, I’m a Fool, during 2012.

Hometown: Denver via Cuenca, Ecuador
Formed: 2017
Latest Single Release: "Young" self-release on June 12, 2019
Catch Her Live: Lion's Lair on October 13
About: Neoma has captivated music lovers all over the world with her dreamy yet energetic "Lunar Pop" hits. In 2017, Neoma hit the top of the Ecuadorian charts with her infectious single "Real." Since then, she’s played concerts to thousands of fans throughout South America. Hundreds of thousands of fans have enjoyed Neoma’s music videos and have streamed her songs on digital platforms. Recently relocating with her producer, Danny Pauta, from Cuenca, Ecuador to Denver, Colorado, Neoma hopes to spread the joy of her music to the wonderful people of the United States.

Hometown: Denver
Formed: 2017
Latest Release: They Say You're A Demon, Self-Release (July 12, 2019)
Catch Them Live: October 12 at Bluebird Theatre
About: Lela Roy’s soaring voice powers the band’s songs, which mine the sounds of dream-pop, 90’s alternative rock, and experimental indie. Eddie Schmid (bass) and Ramel Sanchez (drums) are the band’s driving backbone. Daniel DiMarchi (lead guitar/synth) adds dreamy textures, and Stephen Pamas (guitar, synth) adds honeyed vocal harmonies and tuneful leads. After honing their sound in Colorado basements, the five-piece went on to record their debut album. In July 2019, on the heels of being named "Best New Rock Band" by Westword, the band released the EP “They Say You’re a Demon."

Hometown: Denver
Formed: 2011
Latest Release: Remember That Cool Thing We Did via Staycation Records (Late Fall 2019)
About: South Of France is an indie-pop band that was initially started by multi-instrumentalist songwriter/producer Jeff Cormack in 2011. Inspired by his love for retro guitar-pop, South Of France began as a spare-time, lo-fi, garage rock project until the indie music and film world noticed his unique ability to create dynamic, melody and guitar-driven indie-pop that is centered around his intertwining vocal parts with layers of reverb-soaked harmonies. Their independently released, debut full-length album "Another Boring Sunrise" was featured on several major music blog's "Most Anticipated Albums of 2012" lists, and was released on Sept. 18, 2012. This album landed them print features in Under The Radar magazine, Filter Magazine and has earned several excellent reviews from numerous influential music critics around the world. In 2014 South Of France was listed as one of the top ten reasons to visit Denver by Refinery29 Magazine.
They are currently working closely with their team at Dualtone Records and Staycation Records. For their latest release Jeff has collaborated with producer Shane Stoneback (Vampire Weekend, Cults, Sleigh Bells etc.) where he has spent time mixing finishing the album at Rostam’s studio in Silverlake.

Hometown: Denver
Formed: 2015
Latest Release: The Ghost at the Feast via Grouphug Records (May 17, 2019)
Catch Them Live: September 11 at Hi-Dive
About: Turvy Organ’s self-recorded 2016 debut, The Soft Light, was a rich introduction to the band’s influences: energetic, fist-pumping mid-2000s indie rock like Wolf Parade, Bright Eyes, and Modest Mouse. There’s a nostalgia in their formula, but it feels fresh thanks to frontman Ilya Litoshik, who delivers his straightforward lyrics with disarming passion and earnestness. It’s also helped along by the neurotic, dynamic arrangements and squelchy leads, adding up to a sound tailor-made for a long, winding drive through the desert. Litoshik founded Turvy Organ in Austin, Texas in 2012. After touring the U.S. as a solo singer-songwriter, he moved to Denver and met Paul Simmons and Anthony Duran, who now form the band’s propulsive rhythm section. After weathering several lineup changes, the band has carefully honed their sound and gigged at a torrid pace, opening up for rising indie upstarts like Rolling Blackouts Coastal Fever, Gringo Star, and Iska Dhaaf. Their work ethic and magnetic songs have won them a core following in the Front Range area, with 303 Magazine and Westword naming them one of the best alternative bands in Denver.