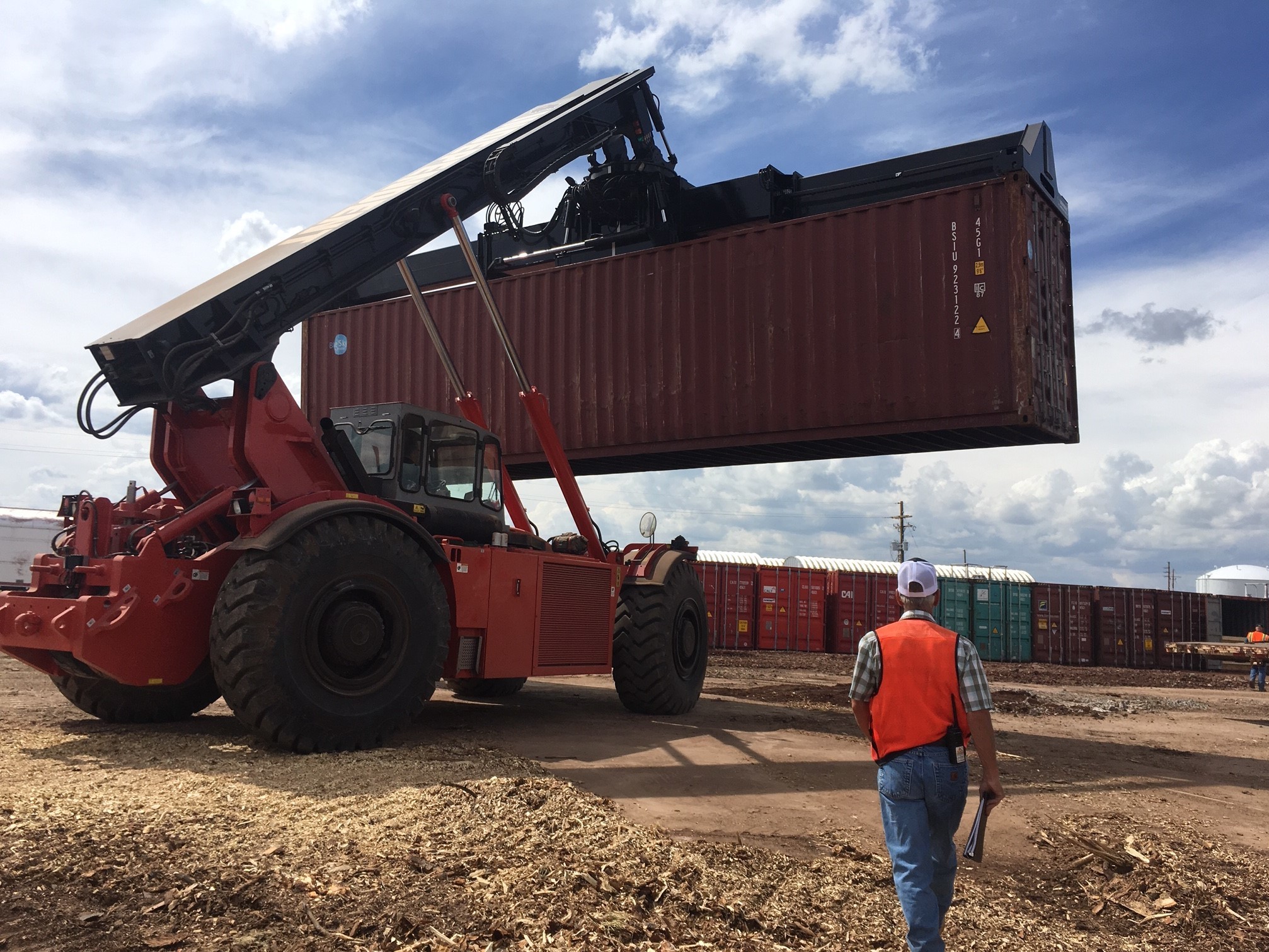 A huge mechanical claw scoops up several ponderosa pine logs and feeds them into an industrial chipper. Thousands of wood chunks are then blasted into a large shipping container.

“It goes anywhere from one to four to three up to seven small ones can just kind of throw in that little jaws there,” explains Jeff Halbrook, a research associate with Northern Arizona University’s Ecological Restoration Institute. Today he’s overseeing what’s fondly known as the chip-and-ship pilot project about 20 minutes west of Flagstaff.

These trees being fed into the chipper were recently cut from the nearby Coconino National Forest. A crew of six has been working for days to pack the shipping containers as tightly as possible, stuffing each one with about 40,000 pounds of chipped wood. Then another machine hoists the container onto a nearby railcar. In about two weeks, nearly 60 containers will arrive at a port in South Korea.

“They primarily use these wood chips for production of energy. Moving away from the fossil-based energy operation in South Korea,” says Northern Arizona University forestry professor Han-Sup Han.

Move away from fossil fuels

He’s hopeful the chip-and-ship project could support global efforts to move toward carbon neutrality and at the same time bypass the main roadblock to large-scale forest restoration in the region known as the “biomass bottleneck.”

“This material is so small and it has so low value, hauling this material to the market … economically is unfeasible. To be able to complete the restoration of the operation you need to move that out of the forest,” Han says.

This debris is called biomass and burning it—at least small chunks like this—releases less carbon than traditional coal. The U.S. Forest Service wants to eventually thin a million acres of ponderosa pines vulnerable to wildfire in Arizona with its Four Forest Restoration Initiative.

But the agency can’t get there without first clearing all that cut-down debris from the forest floor. The bottleneck has caused significant setbacks and slow-downs for restoration initiative since it began several years ago.

“When you thin an acre … you can’t go and do another acre until you’ve finished that half-a-load or load of slash or small-diameter material,” says Rich Van Demark, a forester with the Arizona Department of Forestry and Fire Management. “The bottleneck is essentially not having homes for that lower-value, lower-quality wood.”

Experts say a lack of domestic markets is mostly to blame for the delays. Biomass-produced energy is expensive and there just aren’t many facilities in the U.S. that can use it. Plus, the material can be sold in Asia for more than double of what it fetches domestically. That’s why local forest managers started looking overseas for a solution by tapping into demand for wood on the other side of the globe to speed up forest restoration back home.

“As these markets develop and these techniques are refined, we’re able to do more acres, and we’re way behind the eight ball on our ability to manage acres,” says Van Demark.

Chip-and-ship could eventually export half-a-million tons of biomass each year. Jeff Halbrook and others are even hopeful it could help restart the long-dormant wood-products industry in northern Arizona.

“We would need to get more workers in the forest, more truck drivers to haul the material here. …” says Halbrook. “So our workforce would need to increase before we could really ramp up.”

Project supervisors acknowledge transporting that much material nearly 6,000 miles across the Pacific would come with a substantial carbon footprint. To offset that, they’d use hundreds of shipping containers that already return empty every day to Asia from the U.S.

If all the pieces fall into place, chip-and-ship could be key for South Korea to move away from fossil fuels while helping make U.S. forests more resilient to wildfire.