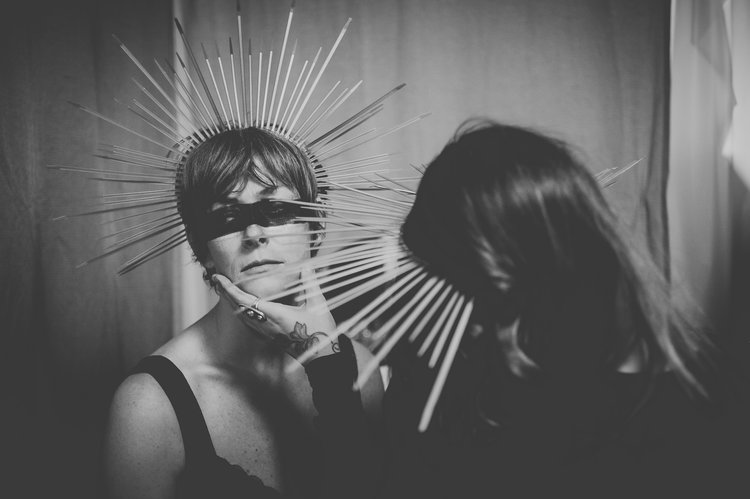 Glenn Ross/Courtesy of the Artist

Bluebook started off as a solo project for Julie Davis in 2005. The act is very visual, and her live show has become a draw as the statuesque musician sings and plays upright bass with looped percussion. Over the last few years, Davis has added even more layers and textures to her sound and live show.

Known for bands over the last two decades such as Bela Karoli, Miss America By Wheary, and Fairchildren, and being a touring member with Nathaniel Rateliff, she released "The Astronaut's Wife" EP in 2018.

This marked a moment when the frontwoman expanded her lineup to include Jess Parsons (Alex Cameron) a keyboardist and singer, and more recently drummer Hayley Helmericks (Snake Rattle Rattle Snake).

The three-piece band has put together a new immersive set for their upcoming Valentine's Day show at MCA Denver Cafe. Collaborator Joseph Pope III calls it a "sonic loom," that is a textile and light installation that will transform the museum into an intimate gathering space for the show.

Davis has been creating these immersive sets as far back as their appearance in our studio in 2018. She also spoke with Colorado Matters about her background as a local musician.

A crowd favorite, the song "Carnage" now has a music video that was filmed and directed by Rett Rogers (Nathaniel Rateliff and the Night Sweats, Nicole Atkins). Rogers goes back to his experimental filmmaking roots in this stunning video; crediting his former teacher and mentor Phil Solomon for inspiring the technique.