The visit comes on the heels of Nevada’s caucuses, where Buttigieg came in third behind Sen. Bernie Sanders, who was declared the winner of the state, and former Vice President Joe Biden.

“I’m so excited to be with you after what I would say is a pretty good day in Nevada,” Buttigieg told the 8,500-person crowd. “I believe the purpose of the presidency is not the glorification of the president. It is the unification and empowerment of the American people.”

The former two-term mayor of South Bend, Indiana, is the first openly gay presidential candidate to get traction in the polls. At 38, he is the youngest candidate in the 2020 primary race.

Some in the crowd dressed in rainbow-colored attire and said they support Buttigieg because he would back LGTBQ rights. Elipio Darling of Lakewood said he liked the candidate’s forward-thinking attitude but was uneasy after hearing about Nevada’s results. 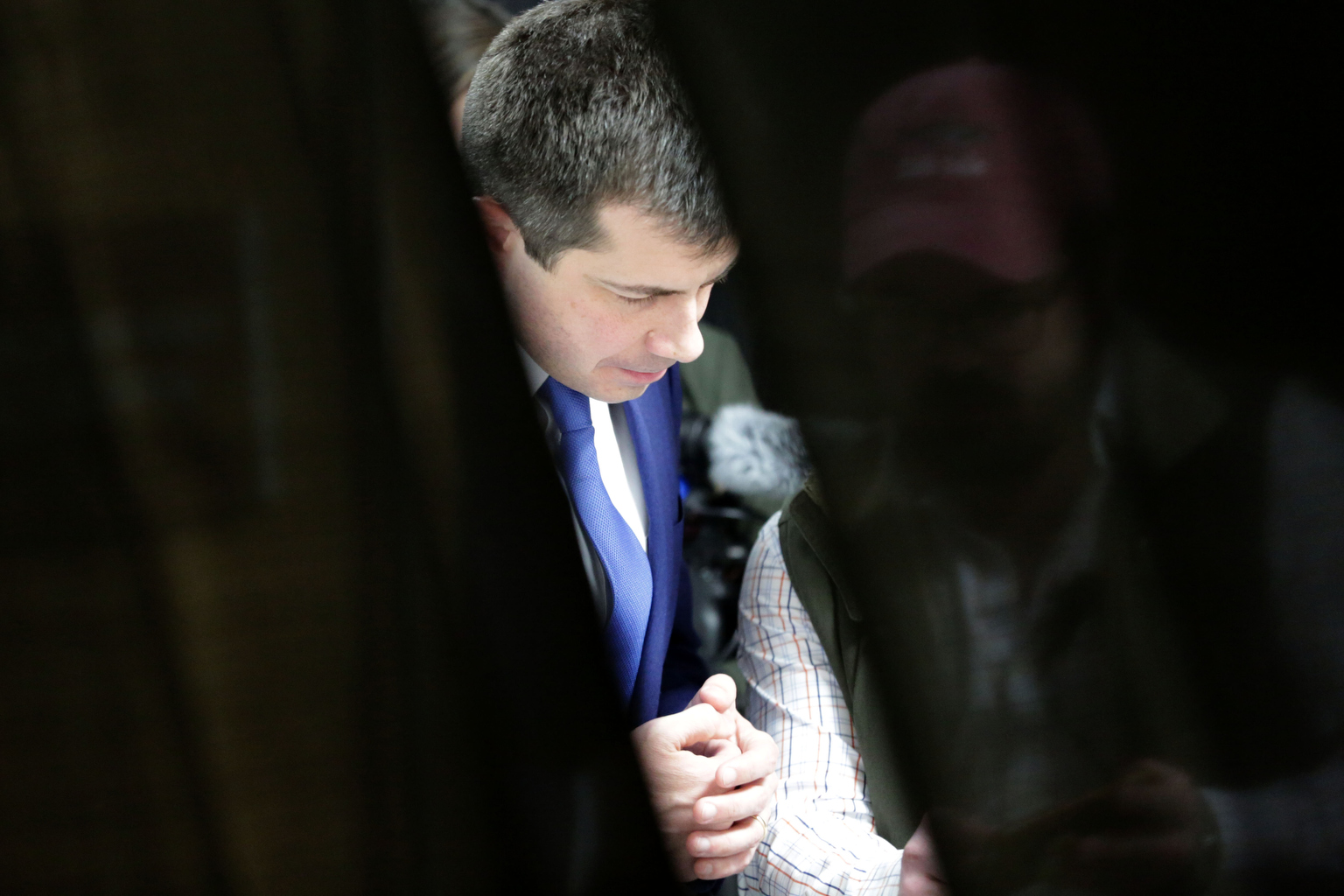 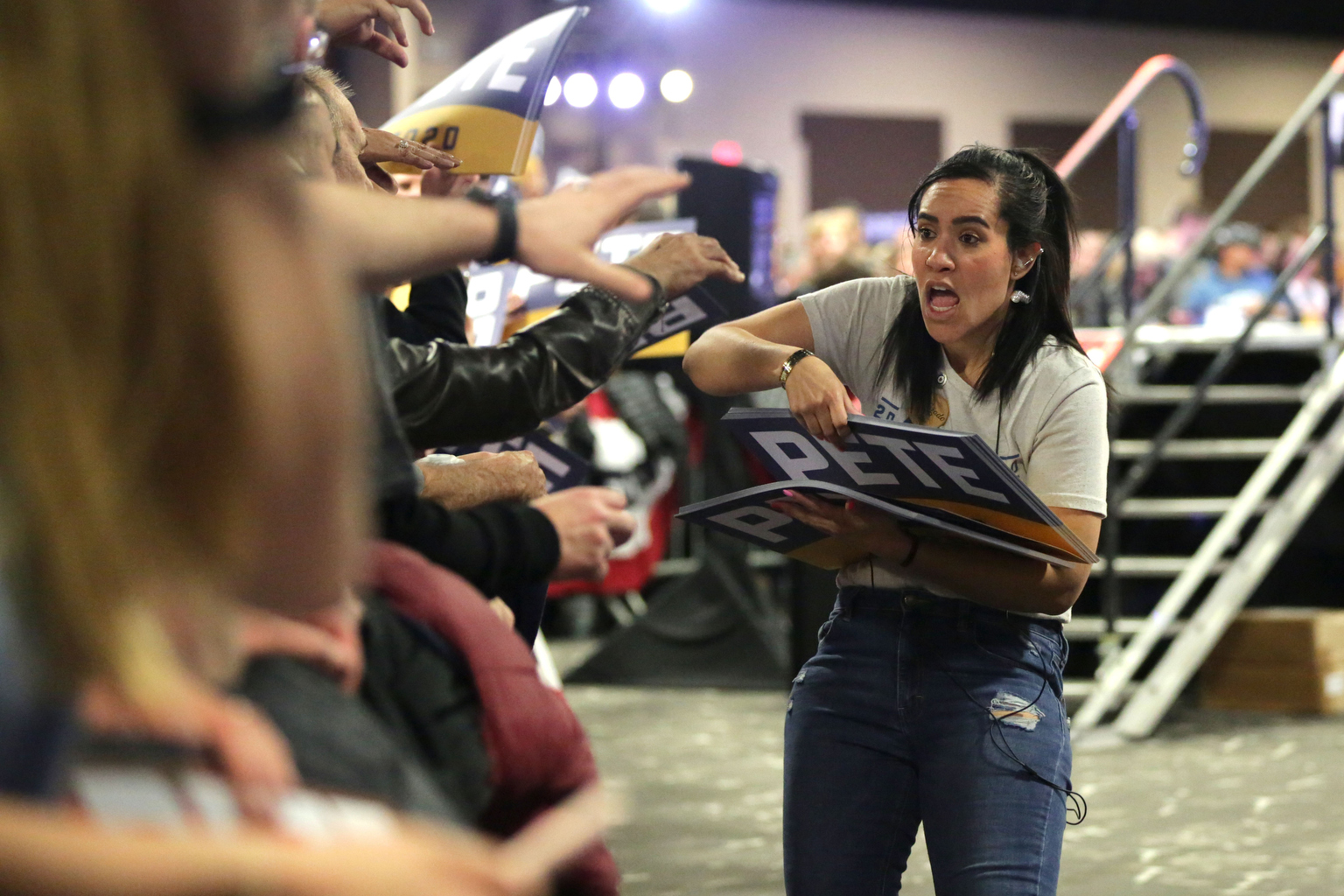 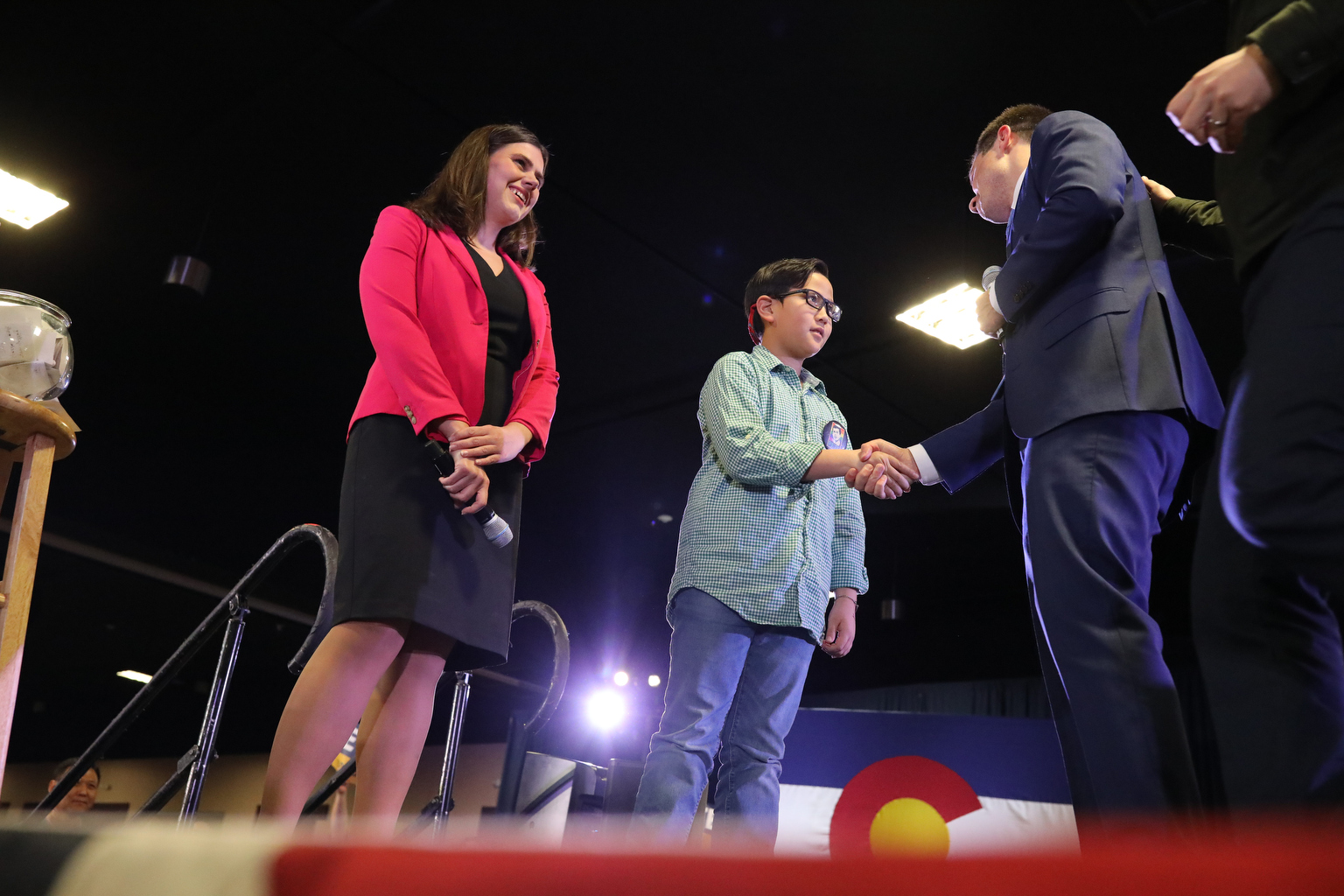 Hart Van Denburg/CPR NewsDemocratic presidential candidate and former South Bend, Indiana, Mayor Pete Buttigieg speaks to supporters Saturday night, Feb. 22, in Aurora. During the Q&amp;A portion of his appearance with Secretary of State Jena Griswold, he welcomed 9-year-old Zachary Ro of Lonetree to the stage. Ro had asked for Buttigieg’s help in telling the world he was gay. 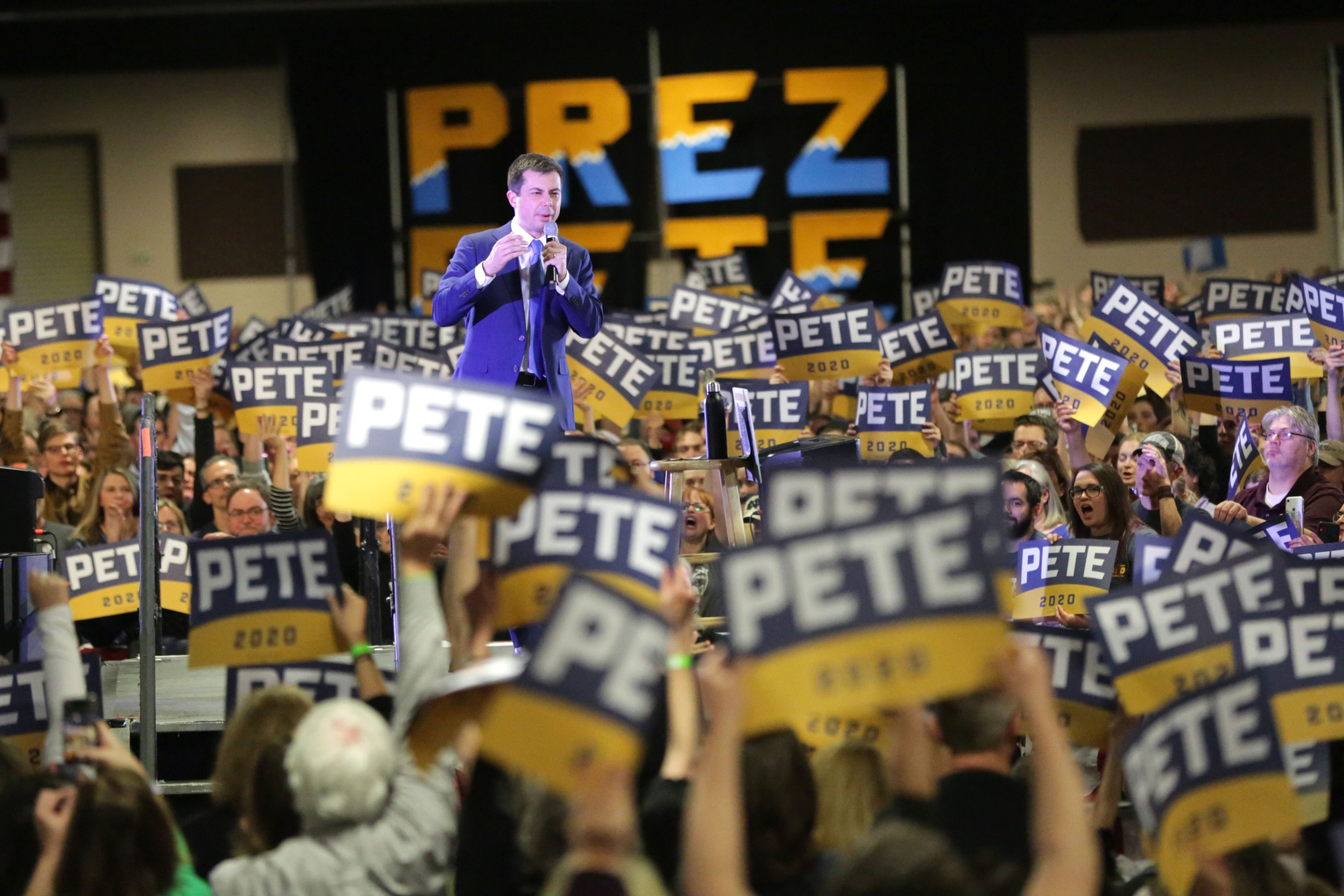 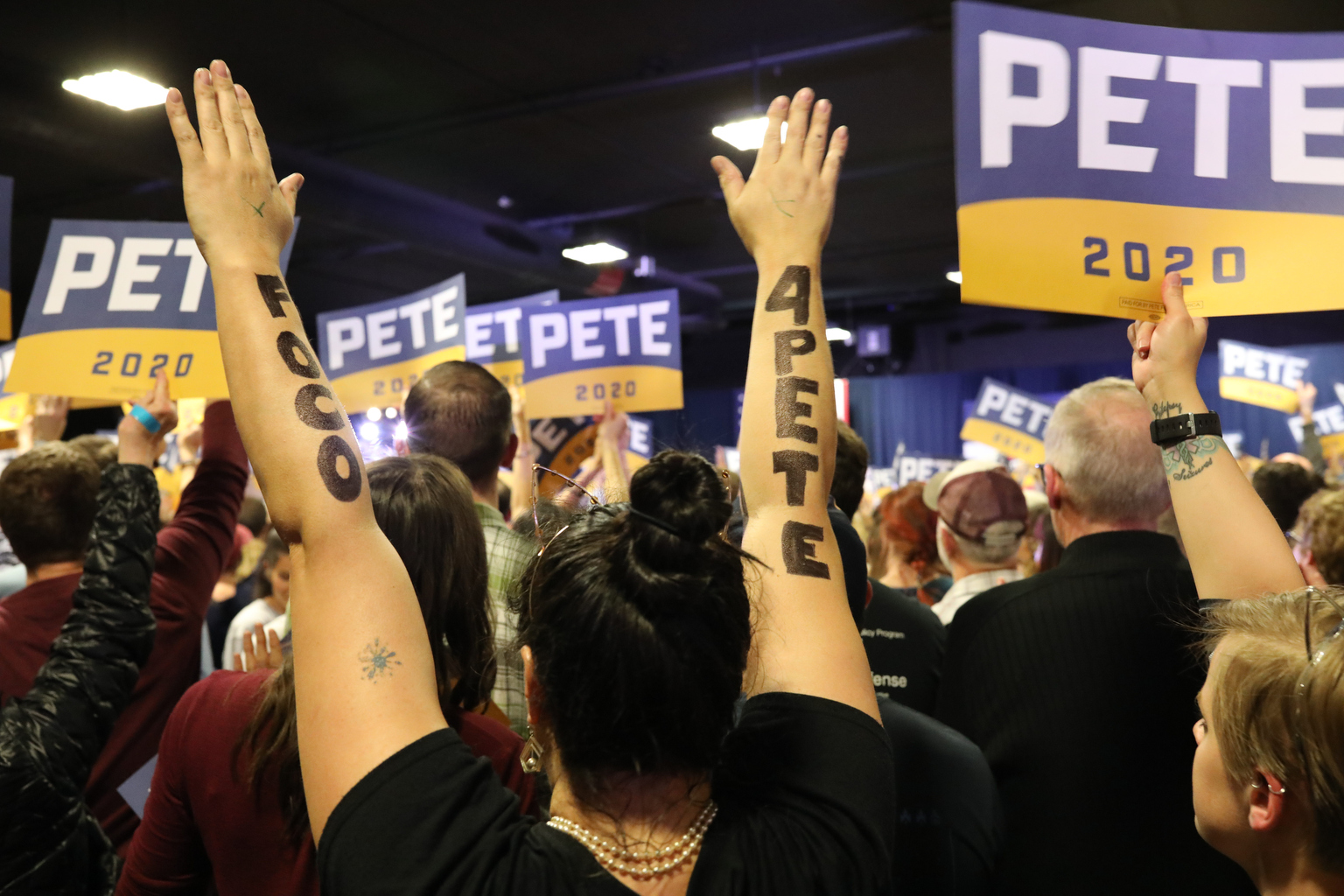 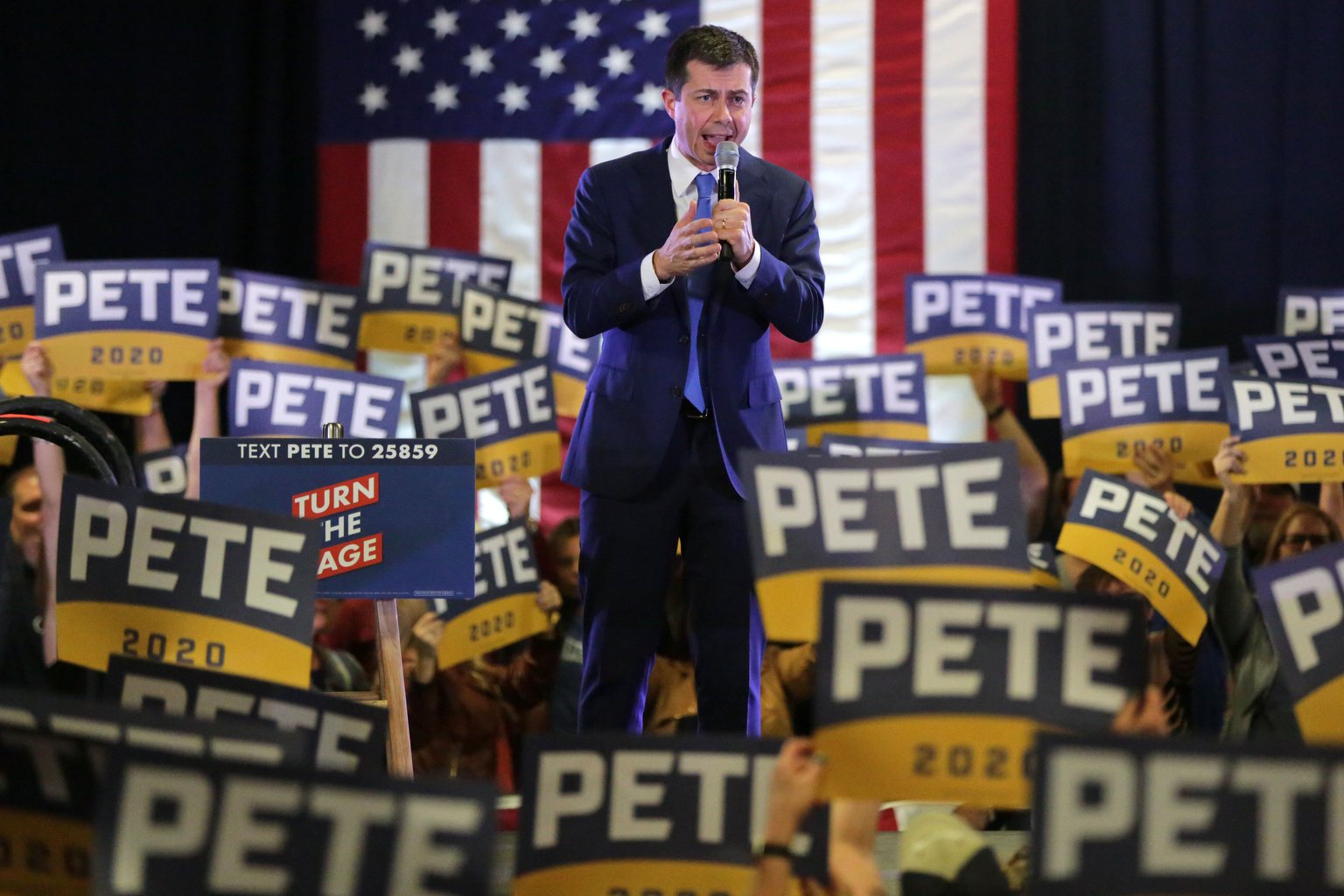 “I am very nervous about that, but I have a lot of faith so I think it’ll turn around, hopefully,” he said, adding that it’s hard to say what could happen if the candidate isn’t able to attract voters of color.

“I can only speak for myself, as a person of color, but I do know a lot of people of color that are behind him but they have mixed feelings and emotions just like with any other candidate.”

Jennifer Ungeranderson from southeast Aurora said she worries about how Buttigieg will make it to November if he can’t turn that aspect of his following around.

“He’s got to figure out some way to reach that divide and reach out and get people of different ethnicities involved because they have so much more at stake,” she said. “I think Mayor Pete is one of the most intelligent candidates we have running. His background is incredible.”

Ungeranderson said Buttigieg’s military background will make him a great leader. She likes his stance on Medicare for those who want it and favors him over other candidates because he’s more moderate. But she said she would support a more left-leaning candidate like Sanders.

Wilma Trujillo of Greeley said she likes that Buttigieg is young and has fresh ideas.

“He’s pro finding solutions to climate change,” she said. “I think for him, education is important. I’m not asking for free tuition but funds to do research to maintain my education.”

She said she was disappointed he didn’t win Nevada but thinks it’s because Latinos in the state didn’t vote.

“There’s a lot of Latinos,” she said. “It’s a lot more diverse state, and I’m disappointed that we didn’t show up there.”

The Colorado crowd Saturday night was primarily white but there were more people of color in the audience compared to his previous Colorado stop in January. The candidate held a fundraising event at the Filmore Auditorium, where attendees had to pay to get in. There, supporters said they liked his stance on climate change, gun control and health care. But again, many worried he wasn’t able to appeal to voters of color.

Colorado Secretary of State Jena Griswold made an appearance and presented Buttigieg with questions submitted by audience members. She touted Colorado’s election security.

But what took the crowd’s full attention energy was when Griswold pulled a question from 9-year-old Zachary Ro of Lonetree, who asked for Buttigieg’s help in telling the world he was gay.

“LOVE IS LOVE!” people cheered as Ro took the stage. Buttigieg offered him his advice.

Buttigieg encouraged attendees to remain hopeful even if they have election fatigue and are exhausted by politics today.

Colorado will participate in Super Tuesday’s presidential primaries March 3, alongside at least a dozen other states.

Editor’s note: Earlier versions of this story contained a photograph that has since been removed because of a photographer’s reporting error.