It was a close call for Denver, but liquor stores are still open across Colorado despite COVID-19. That means local breweries will still make their beer.

In a large warehouse in the Sunnyside neighborhood, Denver Beer Co. brews around 20,000 barrels a year. With all of that fermentation comes alcohol and carbon dioxide — a gas that contributes to climate change. The company used to let all of that CO2 bubble out of their brew and into the air.

“But our new technology allows us to hook a hose up to this fermentation tank and put it through a dryer, a filter and a compressor,” said Charlie Berger, co-owner of Denver Beer Co. “It creates a liquid gas that we can actually use.”

The technology is already available for large beer operations. The challenge for Austin-based Earthly Labs was to scale it down and make it affordable for microbreweries. Berger said this was a struggle until the Colorado Department of Public Health and Environment connected him with a cannabis company to buy their extra CO2.

Turns out, indoor marijuana plants need the gas to grow.

“It really was a perfect pairing, especially for Colorado. We've got a lot of breweries. We got a lot of cannabis operations,” said Kaitlin Urso, an environmental consultant for the state’s small businesses through the Colorado Department of Public Health and Environment.

Beer and cannabis companies from all over have asked Urso how this might work for them too. About two dozen breweries around the country have adopted the technology, and Earthly Lab’s CEO Amy George said wineries and distilleries are interested as well. Denver Beer Co. is the first business to have a buyer for its excess CO2.

The Clinic is a medical and recreational cannabis company that grows its marijuana in a Denver warehouse. The company usually buys CO2 from power plants that ship it across the state.

“So the really good thing about this project is that Denver Beer Company is only eight miles away,” said Brian Cusworth, director of operations at The Clinic. “So the transportation footprint has been reduced dramatically as well.”

Denver Beer Co. reuses some of its captured CO2 for carbonation and they’ve noticed an improvement in the way their beer tastes. Berger said that’s just an added bonus — the reason they adopted the technology was to put a waste stream to good use.

Urso hopes this state pilot program can prove that this business partnership works. 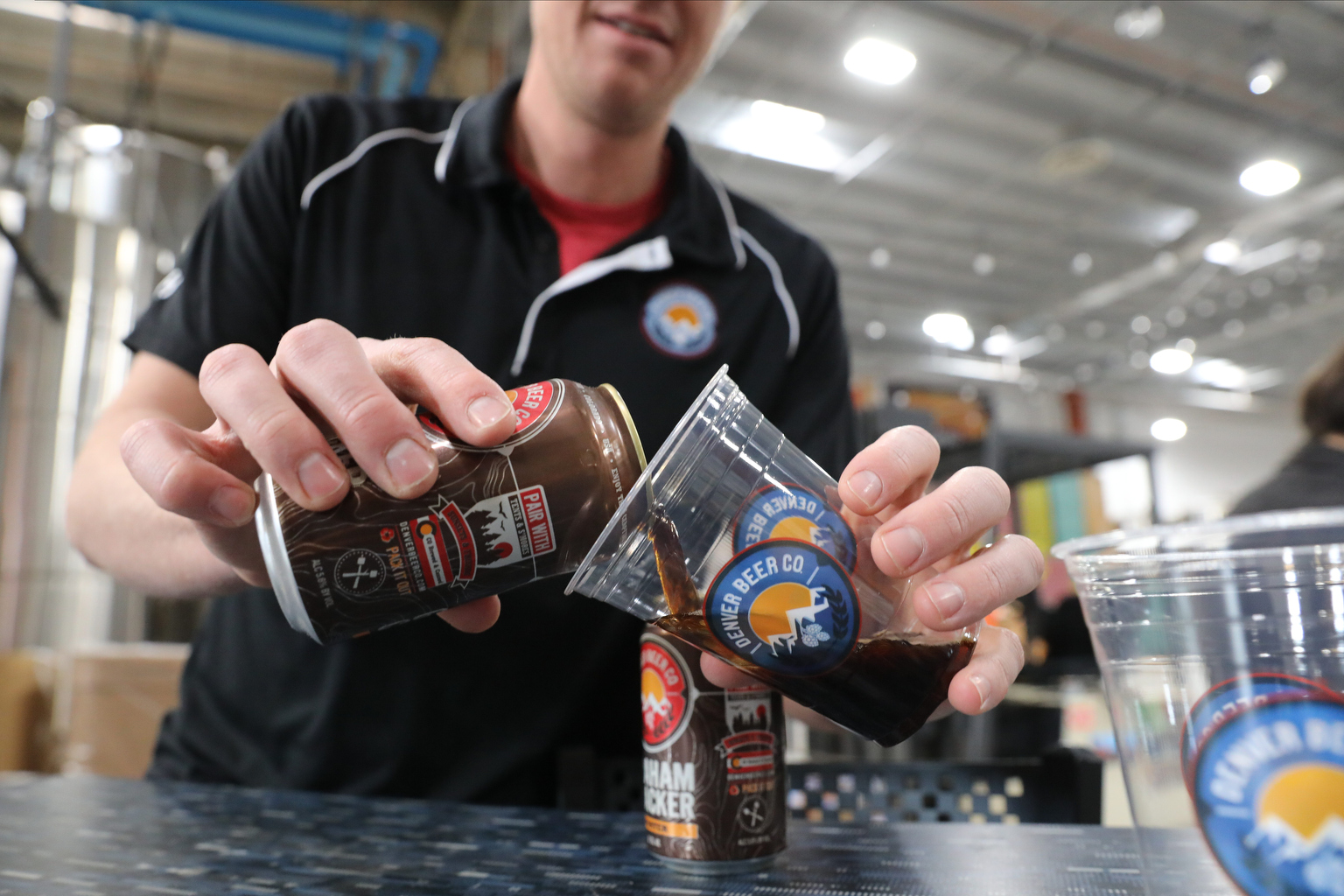 Hart Van Denburg/CPR NewsCharlie Berger, co-founder of the Denver Beer Co., pours some beer for a taste test. Carbon Dioxide generated during fermentation is sold to The Clinic's grow operation in Denver, where it's used to boost plant growth. 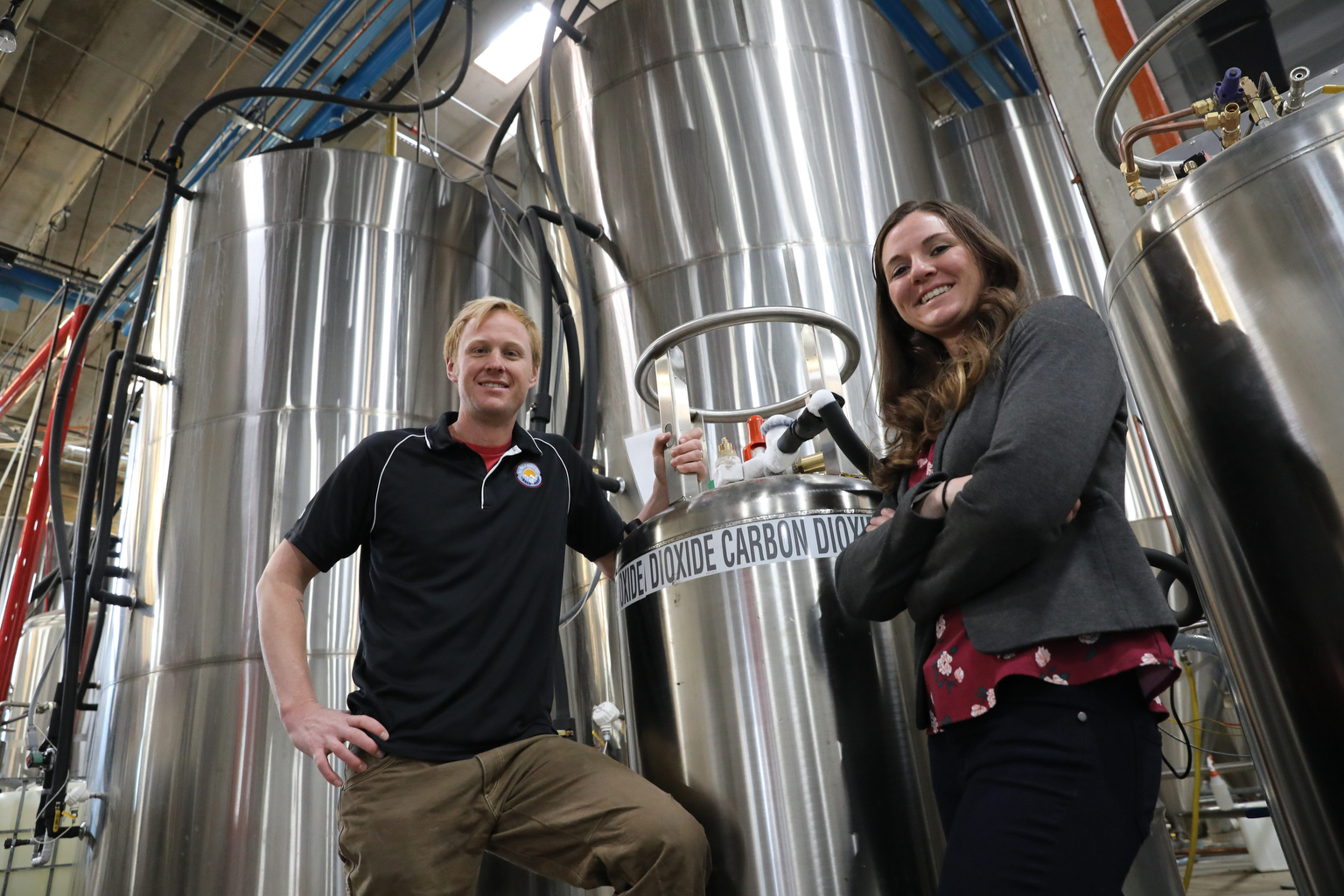 Hart Van Denburg/CPR NewsCharlie Berger is the co-founder of the Denver Beer Co. Kaitlin Urso works for the small business assistance program at the Colorado Air Pollution Control Division. She helped connect the brewer with The Clinic, a cannabis grower. Plants there get a growth boost from carbon dioxide generated during fermentation at the Denver Beer Co. 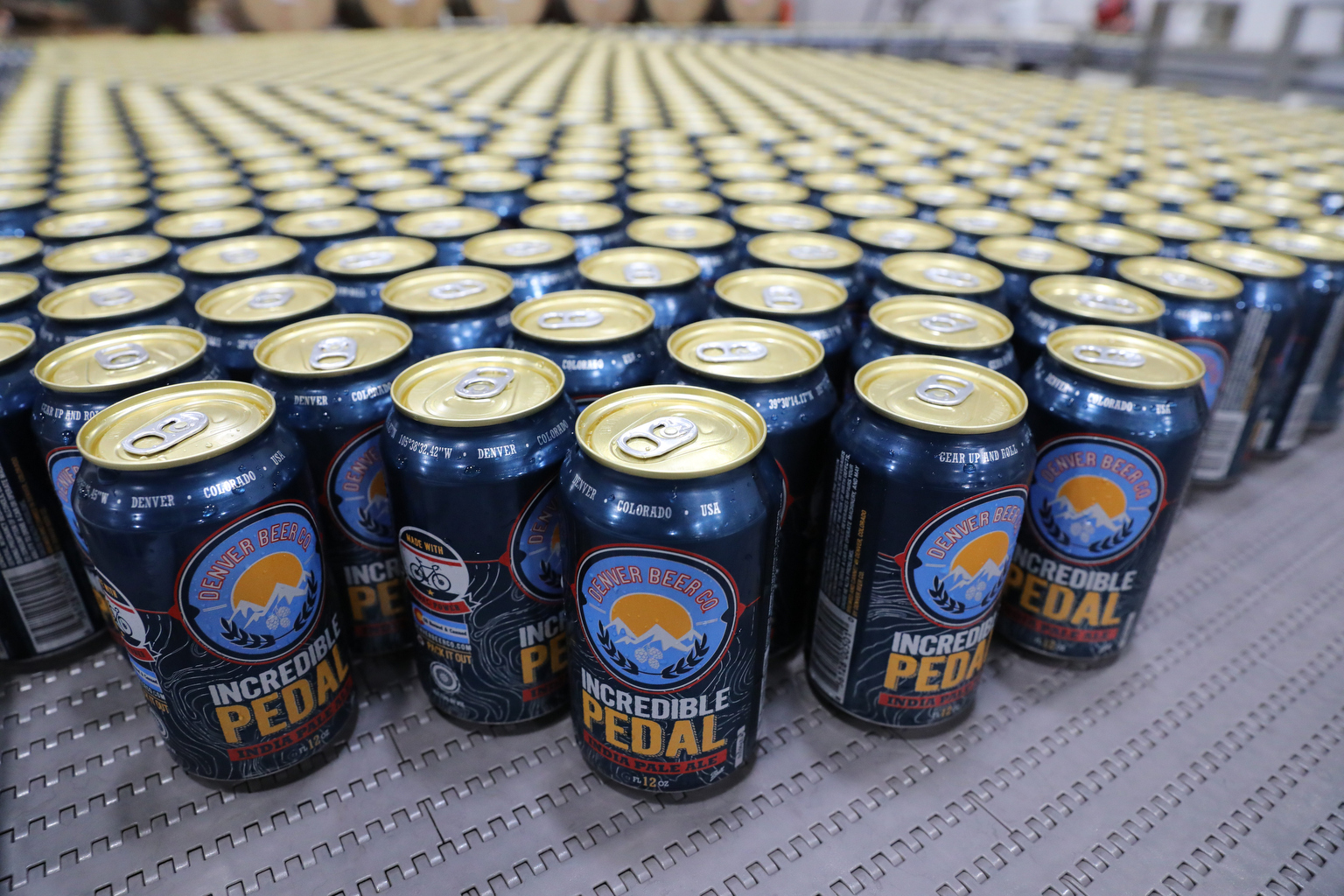 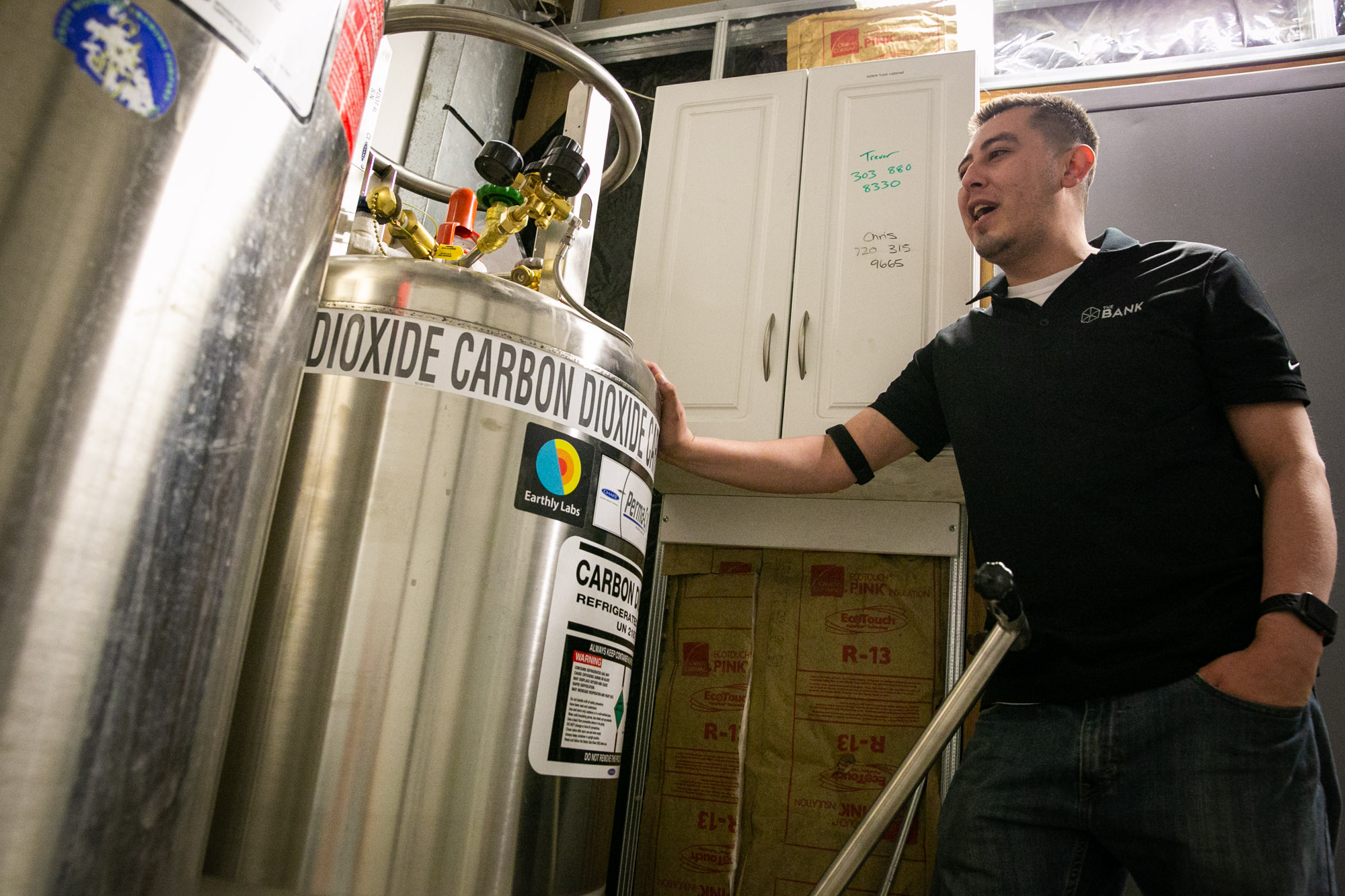 Hart Van Denburg/CPR NewsChris Baca is the production manager at The Clinic, a cannabis grower. Plants at its Denver operation get a growth boost from carbon dioxide generated during fermentation at the Denver Beer Company. 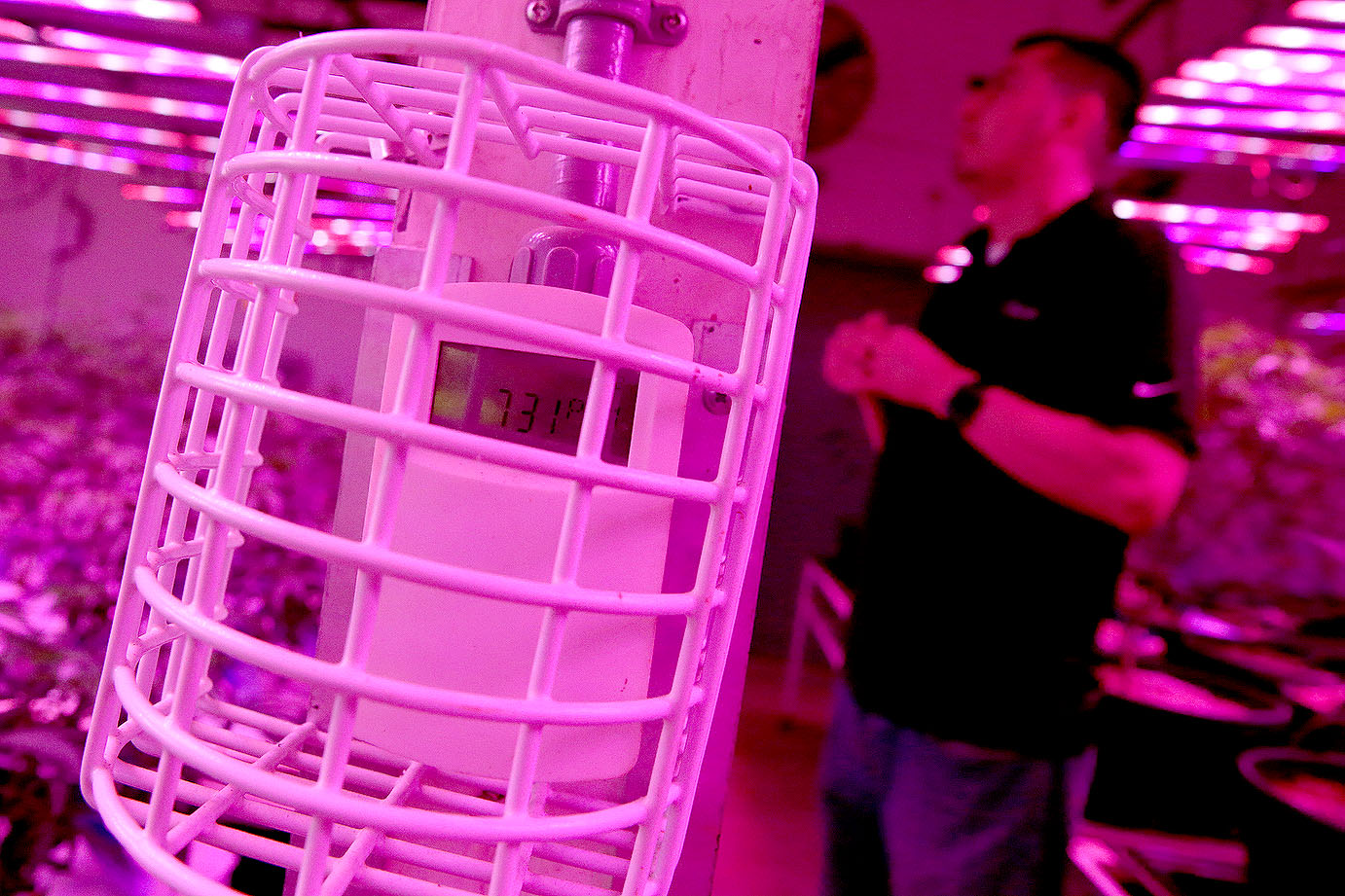 Hart Van Denburg/CPR NewsSensors are placed throughout The Clinic’s grow operation to help staff carefully gauge and manage carbon dioxide levels in the air. Special grow lights give this room a magenta color. 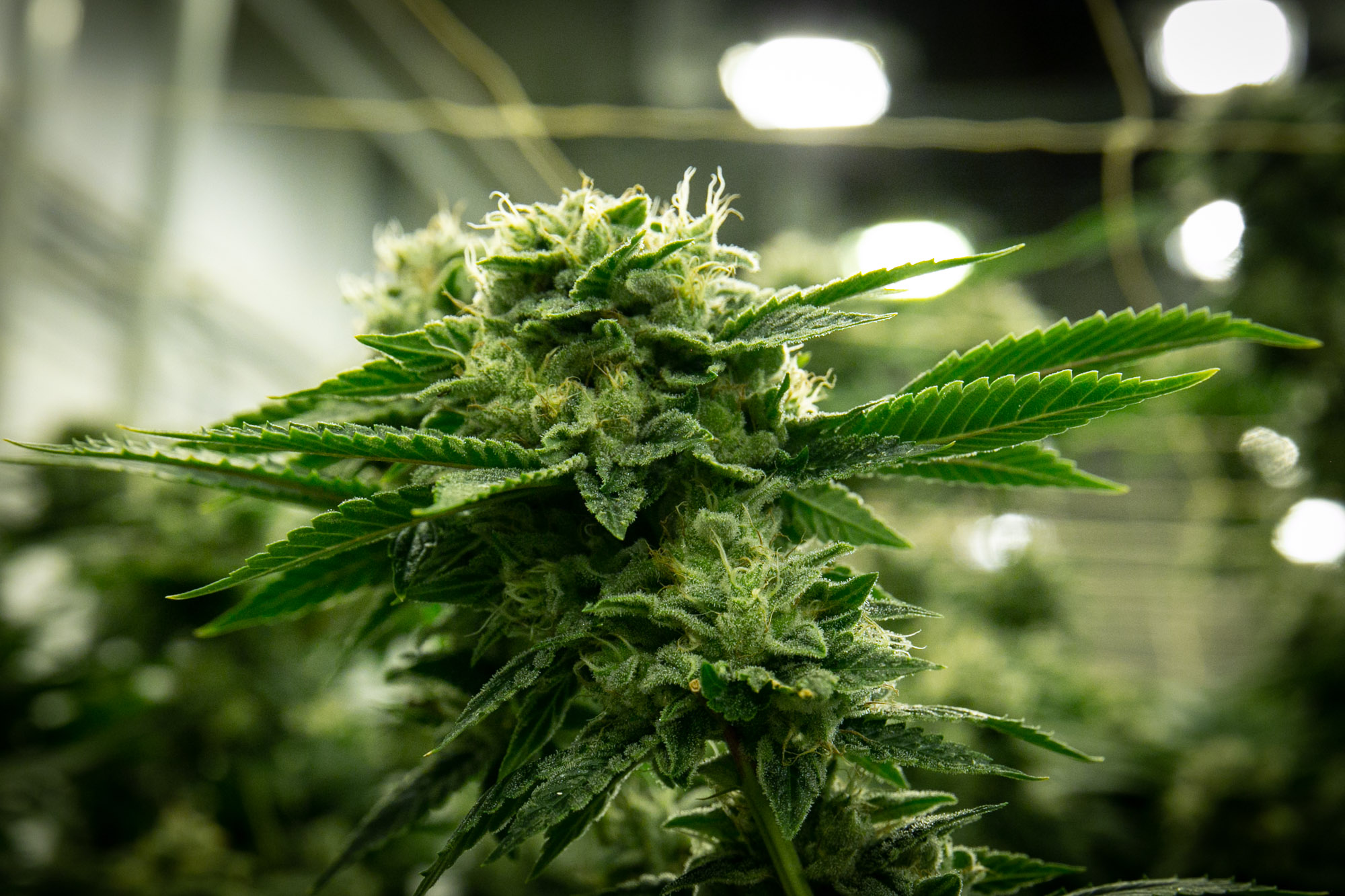 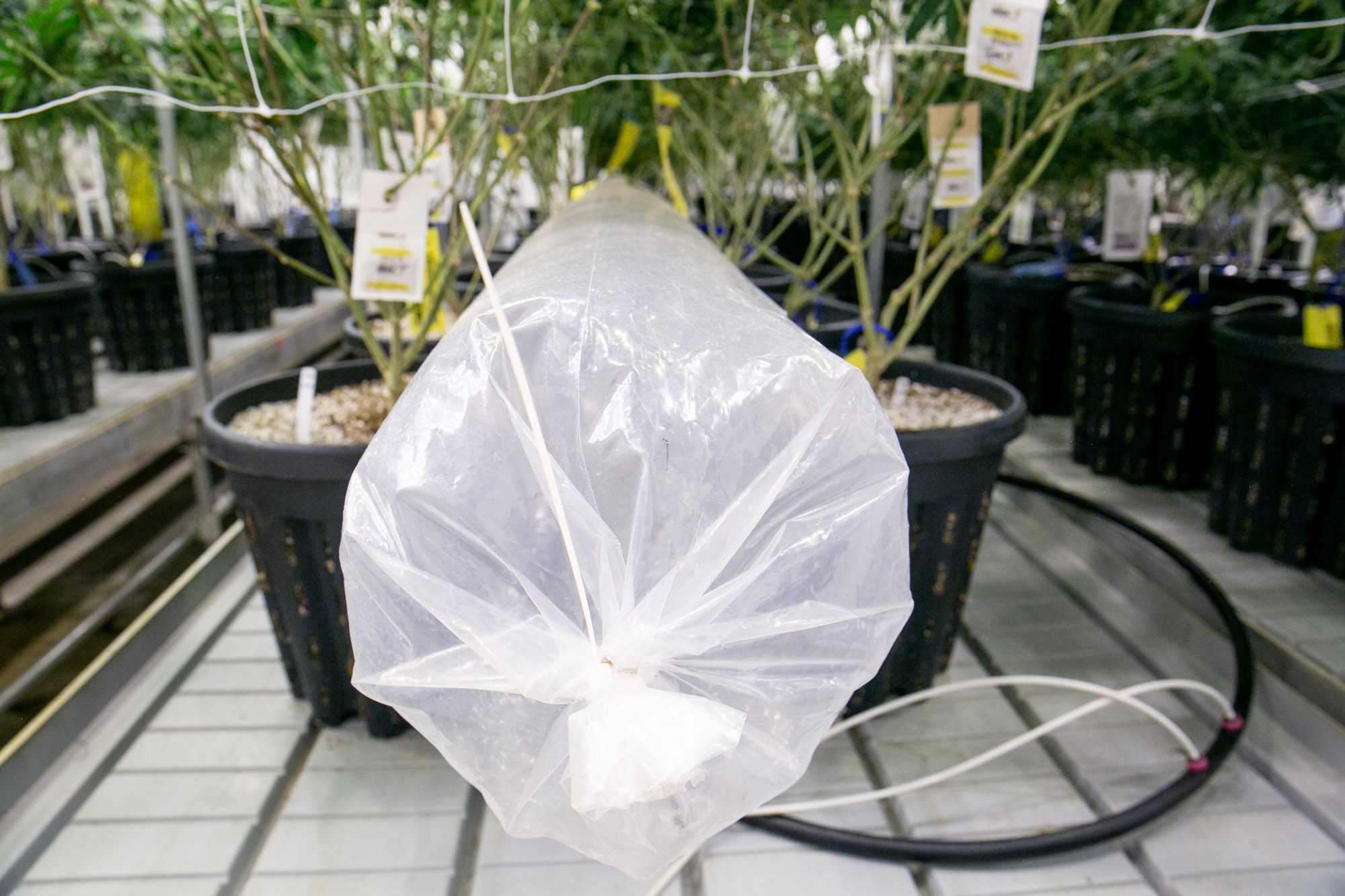 Hart Van Denburg/CPR NewsAt The Clinic's marijuana grow operation in Denver, carbon dioxide generated during fermentation at the Denver Beer Company is used to boost plant growth. Air is pumped through tubes like this to help with circulation.

“We can do it cost-effectively, with environmental benefits,” Urso said. “So we want to replicate this process. We're encouraging more breweries and more cultivations, and helping them connect them along the way.”

While these companies are excited to take environmentally friendly steps, they also see this partnership as a smart business move — both expect a return on investment within the next two years.

For the pilot, The Clinic runs its trials by pumping the two different CO2 sources into separate grow rooms. They’ll run different tests on soil, water and yields to make sure there’s no negative impact on their product. The state is also tracking how much CO2 is produced, to make sure the brewery can sustain its own needs as well as the needs of the cannabis operation.

In the overall picture of Colorado’s CO2 emission sources, these businesses don’t have a big impact. Yet breweries emit more CO2 than a lot of other small businesses in Colorado, according to the state. To reach its lofty greenhouse gas reduction goals, the state says it's necessary to look at all solutions, big and small.