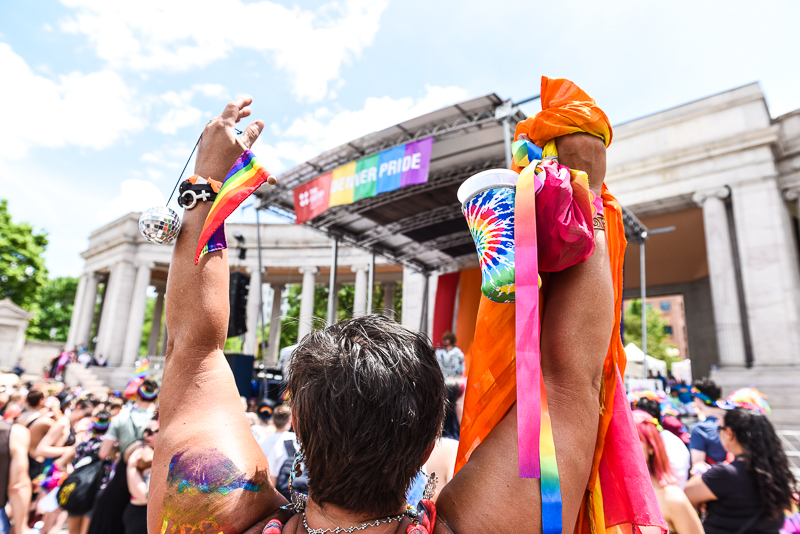 What better time to launch a LGBTQ+ on air special than during Pride month's 50th anniversary! In collaboration with Denver publication OUT FRONT MAGAZINE, Indie 102.3 is presenting a queer-focused one-hour monthly special titled "Out Front".

OUT FRONT is the nation’s second-longest running, independently owned queer media company. Since 1976, they have been dedicated to providing news and features content to and about LGBTQ+ folks, both in Colorado and worldwide.

Hear the Out Front special Monday, June 29, at 10 p.m. Listen to the Guest DJ Session in the audio clip above and a list of the playlist below. Dates of the future special will be announced soon.

Q: Why is it important for Indie to diversify its programming to include the LGBTQ+ community?
Will: As an important part of CPR and Indie 102.3’s mission of diversity, we have always been inclusive of LGBTQ+ artists in our mix.  During the celebration of Pride Month, we have expanded on that mission by spotlighting artists that have elevated the LGBTQ+ community.  In an extension of this celebration, we also want to give a voice to those who actually lead the conversation and represent the community beyond the music.

Q: How do you see this new special affecting future programming when it comes to inclusivity? Is this a one-time special or are you committing to more from show?
Will: We are confident this special feature will resonate with and attract an audience that feels excluded by the media beyond just news.  While the news of the day covers the LGBTQ+ political landscape, there are few outlets for artists that represent the community and speak out through their music.  We hope to add this as a semi-regular feature and build an audience that will feel represented.

Q: Why does this special matter, especially when it comes to celebrating Indie’s one year anniversary?
Will: As Indie 102.3 continues to reach a wider audience and grow our listenership, it is also important to expand on one of our founding missions of diversity. The LGBTQ+ community has been underrepresented in radio and needs more support from terrestrial radio as a whole.  This is our way of elevating the profile and providing a platform for the community.

Q: Tell us why OutFront agreed to partner with Indie.
Kayte/OUT FRONT: We love the mission and believe that by collaborating together, we can expand the reach of LGBTQ+ musicians and celebrate Pride Month in a meaningful way (even though it’s all online this year).

Q: What importance does this radio special, or music in general, hold for the LGBTQ+ community?
Kayte: I think any type of visibility for the community is paramount to continued representation in the media. Even in just the last few years, I’ve seen so many more diverse humans on television and in music. To be able to foster a sense of inclusion and equality by showcasing talented artists and shedding light on the LGBTQ community at the same time is an honor.

Q: What can listeners expect from this new special? Which song are you most excited to hear on the radio?
Kayte: I am most excited to hear Kaleena Zanders and LVDY Music. We have featured both acts in the magazine and I think that who they all are as people only adds to how incredible their music is. Good people and good talent? Sign me up.
Alisha: I enjoyed challenging Guest DJ Kayte to choose music from inspirational queer voices. Her wheelhouse is EDM and I challenged her to get a bit out of her comfort zone too, so there is a well-rounded mix. Personally, I'm excited to share local musician GRiZ, who came out as gay in 2017 and he is such a supporter of the LGBTQ+ community. Also, rising star and self-proclaimed Whoopi Goldberg of EDM music, Kaleena Zanders, is an artist I can't wait for people to hear more from.

Q: Why should this queer special matter to Indie’s listeners?
Alisha: It promotes queer visibility. To hear LGBTQ+ voices on the radio shows the importance of being inclusive to musicians from all different backgrounds.

Q: How does this special build community and encourage the spotlighting of marginalized voices in Colorado’s music industry?
Alisha: This Guest DJ with OUT FRONT MAGAZINE for Pride Month is the perfect time to elevate and connect our audience to events in our community and listen to great music. When a community sees they are represented it continues to support the shift in social consciousness that visibility matters.

List of Artists and Songs featured in the June Pride special below. Listen to the full playlist on Spotify.