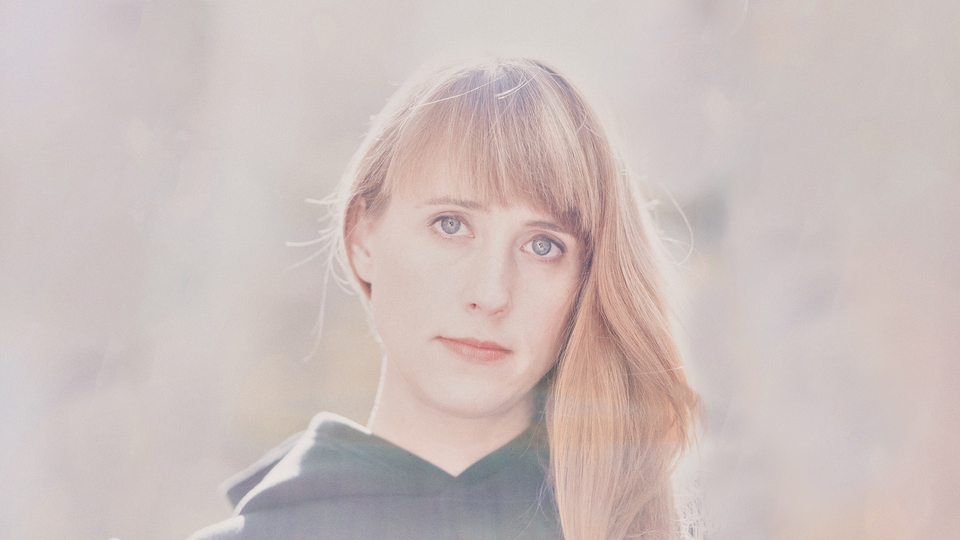 Over the last few years Jenn Wasner has been a touring member of Bon Iver and Sylvan Esso, as well as fronting her band Wye Oak. Now the singer, songwriter, producer, and multi-instrumentalist is back with "Like So Much Desire," a new solo EP under her moniker, Flock of Dimes.

The soul-baring songs in this new record and the confessionals she's been making on her Instagram account are a peek into her head and heart. "Like So Much Desire" is said to be her most personal album yet.

"It’s a collection of songs about finding peace amidst personal hardships, an offering of both comfort and personal reflection, reaching out across the unknown in search of connection," Wasner said.

In a recent interview Wasner talks about what it's like recording and releasing an album during the global pandemic and how she just wishes that after 15 years of complaining about touring that she could be on tour right now: "Any tour, anywhere. I would give anything to be at a gas station somewhere in the American west. Doesn’t matter where. Anyone who knows me will laugh at the answer to this question."

Where are you now?
I’m at home in Carrboro, North Carolina.

What does your daily routine look like now, and is it similar to how it would be if you were at home and working on writing an album without a global pandemic and protests?
It’s not too different, I suppose. I’m still writing and playing music most days. I’ve been to some protests. I try and think about doing something for somebody other than myself at least once a day. I guess it’s pretty similar to what I would do when I was home from tour in the Before Times. Except now, it just never ends…

Congrats on the new release, "Like So Much Desire." How did you celebrate?
Thank you! I celebrated the way I always do—by being simultaneously grateful that people want to listen to my songs and equally nervous and uncomfortable with the attention. Fun!

The album was recorded safely during quarantine with a small group of musicians. Could you tell me a memorable moment from your three weeks in the studio?
In fact, everyone recorded their parts remotely, from home, except for the song I recorded with Justin before quarantine happened. That was the only remotely “studio-like” experience. Although at the time it was just for fun, I didn’t think I’d ever release it. Everything else was accomplished through a series of emails, followed by me painstakingly piecing things together to make them sound as natural as possible.

What inspired the album cover?
My friend Graham Tolbert is an incredible artist, a photography wizard. This entire record was a last minute idea, and was assembled in a matter of weeks, so I needed art and I needed it fast, and I knew I could count on him to make something beautiful and striking and odd. He was quarantined with his partner in a cabin up north, and he made it work with the materials he had on hand. That’s what friends are for.

You revealed that "Spring in Winter" is your favorite song on the EP and in describing the song you wished that people could take time to find "small moments of pleasure" in their lives. What is a small moment of pleasure you have experienced recently?
Well, let’s see. Today I practiced drums for an hour—that’s probably the most fun thing in my life right now. I had a really nice chat with a friend on the phone. I bought three different flavors of ice cream at the grocery store. And I went for an evening walk and I met a beautiful white cat with blue eyes. All very nice things!

You have performed a few livestreams. I understand you were reluctant about this at first, what's your feeling on it now? Is playing a livestream seemingly equal to playing baseball in an empty stadium?
I don’t like it, but then again, I don’t always like playing real shows, either. It’s a privilege to be able to play music for others in any capacity but streaming a performance on the internet is a pale substitute for sharing space with real, live human beings. It’s not even close to the same thing.

You hinted that you were working on new music. What can you share about this so far?
I’m almost finished with a record, it’s going to come out at some point in the next year, and I’m equally proud of it and absolutely terrified for people to hear it. Same old.

I was reading your Instagram post about connecting with music during this time and how you said songs you loved "took on new meaning, they were a lifeline that slowly brought me back into my body." This resonates with me, and I was wondering if you could give me a few examples of songs that have fueled you recently.
Here's a record I have been enjoying: "Party" by Aldous Harding.

I believe the last time you were in Denver performing was when you were a touring member of Bon Iver's band for the Red Rocks show last summer. What did you like about being a multi-instrumentalist and backup vocalist for Justin Vernon and his band?
Red Rocks is a really fun and strange place to be. I like going out into the seats in the daytime and running up and down the stairs for exercise with all of the other fitness heads, although I nearly pass out every time I try. Justin is a remarkable person and a true friend. It’s been a real treat to play with those guys, they’re all incredible musicians and truly lovely people. I hope we get to do it again someday.

You also joined friends Sylvan Esso on their 'WITH' tour. What was this like for you?
The entire tour was practically an ecstatic experience. It’s one I’m unspeakably grateful to have had before the entire touring world stopped on a dime. I miss playing music with people terribly, but it’s the singular camaraderie that exists between the people you tour with that I truly grieve
the most. Those people become like family. Life feels kind of empty without it.

What did opening yourself up to collaboration with these two bands, that are beloved as your band Wye Oak, teach you?
I would argue that both of those bands are FAR more beloved than my own, ha! But collaboration has always been a huge part of my life. Making art in a vacuum gets boring. You need the spirit and energy of others to uncover new parts of yourself.

I checked out the singer-songwriter that you produced, Madeline Kenney, and she's got such a great vibe. Are you hoping to produce more albums in the future?
Madeline is an incredible person, a true artist and creative spirit through and through. I’ve learned so much in the process of making the two records we’ve made together, and I’m truly honored that she trusts me to help bring her songs to life. And yes. I adore producing. I’d love to do more of it, but it’s gotta be the right fit. I wouldn’t be right for just anybody.

One last question. If the coronavirus had a cure and the world was starting to go back to normal, would you rather be out on tour right now or on a vacation? If tour, what band would you be with and where would you like to be performing? If vacation, where would you go?
Um, well, my whole life right now sorta feels like a vacation that I never asked for, so I’m going to go with tour? Any tour, anywhere. I would give anything to be at a gas station somewhere in the American west. Doesn’t matter where. Anyone who knows me will laugh at the answer to this question, as I have been complaining about how hard touring is for the better part of the past 15 years. And I can’t wait to go back to complaining about tour again as soon as possible.

The album "Like So Much Desire" is out now on Sub Pop Records.