On her daughter’s first day of preschool, Amy Over had her first panic attack. It was late summer, 2010.

“It was a nice morning,” Over said. “She looked like she was really excited.”

Four-year-old Brie had led Amy and her husband Curtis to the doors of Joyful Mission Preschool in Parker. They took her photo and gave her a hug goodbye. Amy then turned to Curtis and told him it felt like she was having a heart attack.

“I felt like the walls were closing in,” she said. “Once I actually left her, I was just like, ‘Oh my God.’”

Curtis took her to the hospital.

“Those started that day and stayed with me for a long time,” she said of her panic attacks.

Amy’s anxiety is rooted in her own experience. She was one of the more than 1,800 students enrolled at Columbine High School in 1999.

The student survivors of the Columbine shooting are now in their mid- to late-30s, and many now have families. Raising your own children as a survivor presents a unique set of challenges, like how and when to tell them your story. Mental health professionals have helped parents like Amy, but they’ve also found another important resource in finding answers to those questions: each other.

Amy Over was nervous about where she would go to college in the fall. On the morning of the shooting, her coach, Dave Sanders, told her she’d gotten a basketball scholarship.

“I thought I was the shit,” Over said. “And then I go down to lunch and that’s when I heard the first gunshots.”

She dove under a table. Sanders shouted at her and other students to get out of the school. Bullets whizzed by as she ran to a parking lot and then into the nearby neighborhood. She eventually made it home to her dad and mom.

She has to rely on her mom’s memory of what came next.

“She said I walked in and I was a shell of a person,” Over said. “She said she gave me a big hug and I just went straight to my room and she said I went to sleep.”

In the days and weeks afterward, nightmares kept Over up at night. She knew one of the shooters. She was also trying to process the death of Sanders, who’d been among the 15 killed that day. When Over’s mom tried to comfort her, she pushed her away, thinking she didn’t have any idea what happened at Columbine. 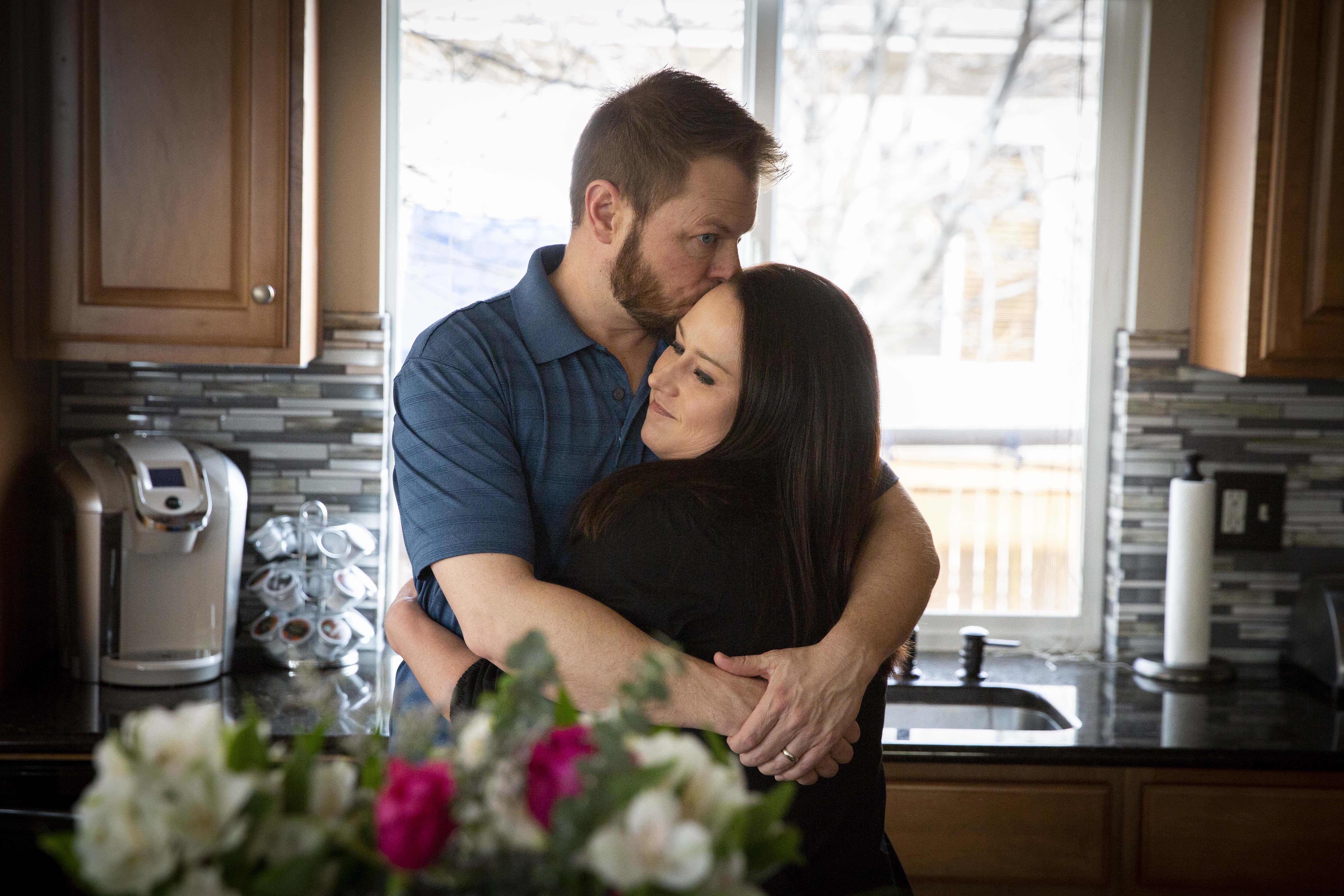 “But now as a mom, I’m like gosh, she must have been just horrified,” Over said. “It had to have been the worst day of her life.”

The Overs raise their two kids — Mason, 6, and Brie, now 13 — on a quiet suburban street in Parker, about 20 miles southeast from Columbine High School. It took time for Amy and Curtis to build this life. The years after high school were rough.

“I was a hot mess, literally a mess,” Over said. “And he kind of swooped me up and took care of me.

Something Of A Coach For Survivor Parents

Amy and Curtis had Brie just seven years after the shooting. They’ve learned to work through her anxieties. She went to therapy and took up kickboxing. Other survivor parents, like Missy Mendo of Lakewood, are new moms. Her daughter, Ellie, is less than a year old. Mendo and Over are both members of a nonprofit known as The Rebels Project; they travel around the U.S. to meet and comfort survivors of other shootings.

Their first trip together was to Paducah, Kentucky where three kids died in a high school shooting in 1997. Mendo said the trip became overwhelming, but Over counseled her to slow down.

“She was like, ‘You’re a new mom, you have to pace yourself. If you need a mental break, you take a mental break. If you are feeling tired, if your back hurts, if your feet are swelling, you need to check in with yourself,’” she said.

Mendo was also wrestling with a big question.

“When I became pregnant, the first five minutes, you are so happy,” Mendo said. “And then immediately I think, ‘What am I going to tell my kid?’”

Amy Over thought about that question a lot, too, when Brie was younger. When should she tell her story? And what should she leave out?

Brie Over Is A Smart, Perceptive Kid

She had long suspected that her mom went through something traumatic. When Brie was in kindergarten, for example, she went through a lockdown drill at school. When her mom found out, she had a panic attack.

“I always knew something,” Brie said, trailing off. “I just had that gut feeling.”

When the time came, Over didn’t just tell Brie her story. Two years ago, on the Columbine anniversary, when Brie was 11, she asked her mom if she could go with her to the school. They walked the halls together, and Over showed her daughter where her coach died. Where she heard the first gunshots. Where she hid under a table.

“I didn’t go into any graphic details or anything, but just kind of walked her through my steps,” Over said. “Then we went to the Columbine Memorial and she got to see how beautiful it was and how peaceful. And we laid flowers down.”

Brie said the whole experience was a lot for her to process. She could tell her mom was struggling but didn’t know how to help her. She thought about it and then gave her mom a hug. In telling the story now, Brie doesn’t sound sure that was the right thing to do.

“I’ve been through certain types of trauma but not mass trauma,” Brie said. “I just didn’t know how to support her.” 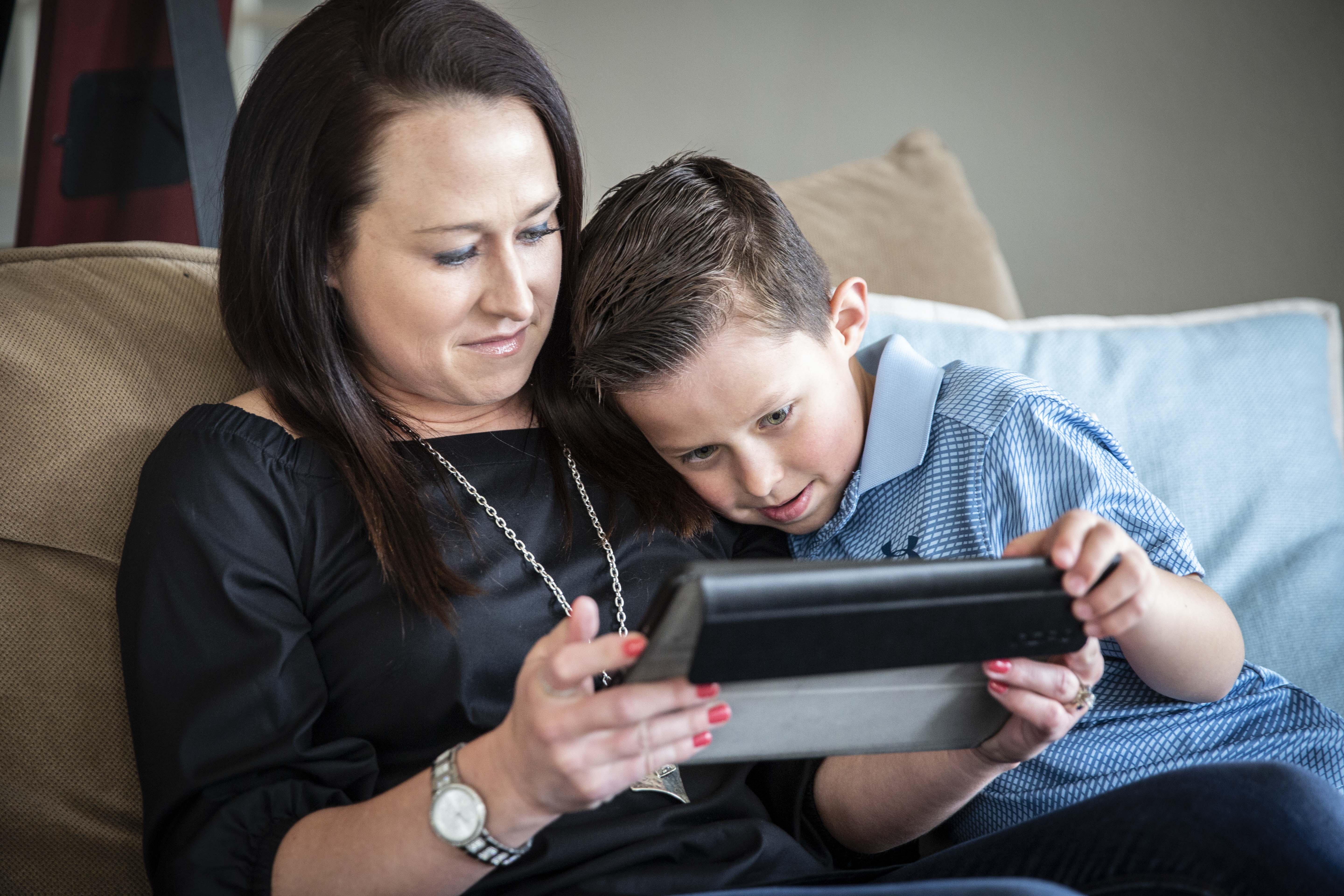 “I finally was able to kind of take a deep breath, and like, ‘finally she knows,’” she said.

Amy Over’s story, and the shooting at Marjory Stoneman Douglas High School in Parkland, Florida, inspired Brie to get involved in the gun violence prevention movement. They both went to the March for Our Lives demonstration in Denver last spring. Brie said it was a powerful, yet draining experience.

Over watched her with pride. But she said Brie asked her a difficult question that day.

“‘Is this going to happen to me?’ And that is — you just say no. The chances of that are really slim. But she has that in the back of her mind,” Over said.

It’s On Amy’s Mind Too

“It’s not surprising that someone who’s lived through this would be more vulnerable to those worries and concerns,” Marans said.

“The child is not thinking about the dangerous world outside in terms of school shootings the parents have experienced,” Marans said. “And yet, if the parent is preoccupied, that may be what they think the child is going to be worried about.”

Survivor parents need to be proactive about their recoveries, he said, as Over has been. So when life triggers unwanted memories it doesn’t lead to overwhelming anxiety.

“When one’s own devices and the support of friends and family are not enough, that is a good time to get professional help,” Marans said.

Twenty years past April 20, 1999, Over doesn’t carry the weight of her experiences alone. Family — and therapy — help her manage her anxiety. She doesn’t have panic attacks anymore. However, she still deals with depression, especially every April as the anniversary nears.

Bringing Brie to school is now a routine part of Amy Over’s life. When she dropped her off on a recent morning, mother and daughter chatted about dinner plans and dancing.

Brie grabbed her backpack and jumped out of the car.

“Bye babe, I love you,” Over told her, watching as her daughter went into school.