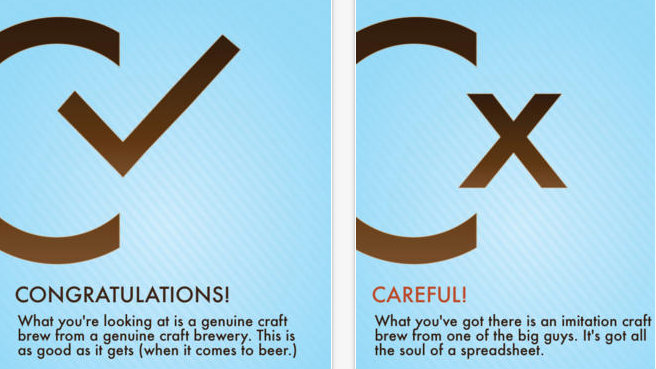 (Photo: Courtesy of Barrett Garese/Craft Check)It’s craft beer week in Colorado, and Governor John Hickenlooper is having three beer taps installed in the governor’s mansion to serve up beer from three local breweries. The governor is celebrating the fact that Colorado ranks among the top states for number of breweries, per capita production and economic impact, according to the Colorado Brewers Guild.

In Denver, where there seems to be a brewery on every corner, one might think craft beer is all there is. But about 90 percent of domestic beer sold is still made by the big two macrobrewers: Miller-Coors and InBev, which owns Budweiser. And increasingly, those two brewing behemoths are behind more of the crafts. That includes Blue Moon, made by MillerCoors, and its competitor Shock Top, by InBev. According to Stephan Weiler, professor of economics at Colorado State University, there’s a good economic reason the macrobreweries are getting into the craft market.

"The big brewers...and their standard Budweiser, Bud Light, Miller, etc., that market is pretty much stagnant. It has barely grown, in fact it has started to decrease a little bit. And so basically that pie is as big as it’s gonna get," Weiler said.

Meanwhile, MillerCoors and InBev have watched the craft beer market grow almost every year for the past several years. Weiler says another incentive is that the profit margin for craft is higher, so big brewers make more per bottle or glass. "They would like to be able to sell six-packs at six, seven, eight dollars a six-pack," he said, instead of the $4 or so charged for a six-pack of Budweiser. Additionally, craft beer drinkers are generally affluent -- just the type of people who would otherwise probably choose wine or liquor.

The problem for some consumers, economist Weiler says, is that it can be really hard to tell that the big brewers are the ones making some of the new crafts. Weiler calls them stealth beers; others call them crafty. And Weiler says on the packaging or online, any mark of MillerCoors or InBev can be hard to find.

"The moment that they mention that, their ability to charge goes down by about a buck, at least, per six-pack," Weiler said. "Generally people are willing to pay less for what they perceive as a big market beer than they will be willing to pay for a premium product. Like organics, like going out to eat in a nice restaurant, you’re willing to pay more if you believe that the quality’s higher," he said.

Barrett Garese is trying to address that. He and a friend have created a new app for the iPhone, called Craft Check, that helps consumers figure out whether a beer is from a small brewer or if it’s produced by one of the big macrobreweries. Through a bar-code scan or a name search, consumers can determine where their beer came from.

To build their database, the Craft Check team used the definition of "craft beer" put forward by the Brewers Association. The definition requires the brewery be small and independent, and there are rules about what ingredients they can use. However, the association recently changed its rules about ingredients to include some "adjuncts" -- like corn and rice.

But why have a definition at all? Why not let taste decide what's a craft beer? And, do consumers care whether their beer is made by an independent microbrewer or not?

Garese says he gets questions like that in response to his app. But he says 90 percent of the feedback has been positive. "I got a great email from a liquor store owner in Washington, D.C. who said she’s been looking for this!" Garese says. Garese says he was inspired to make the app after standing in the grocery store wondering what he was looking at.

"I was talking through my frustrations," he said, telling himself. "'This can’t be that hard. I bet someone besides me would find it interesting.'"