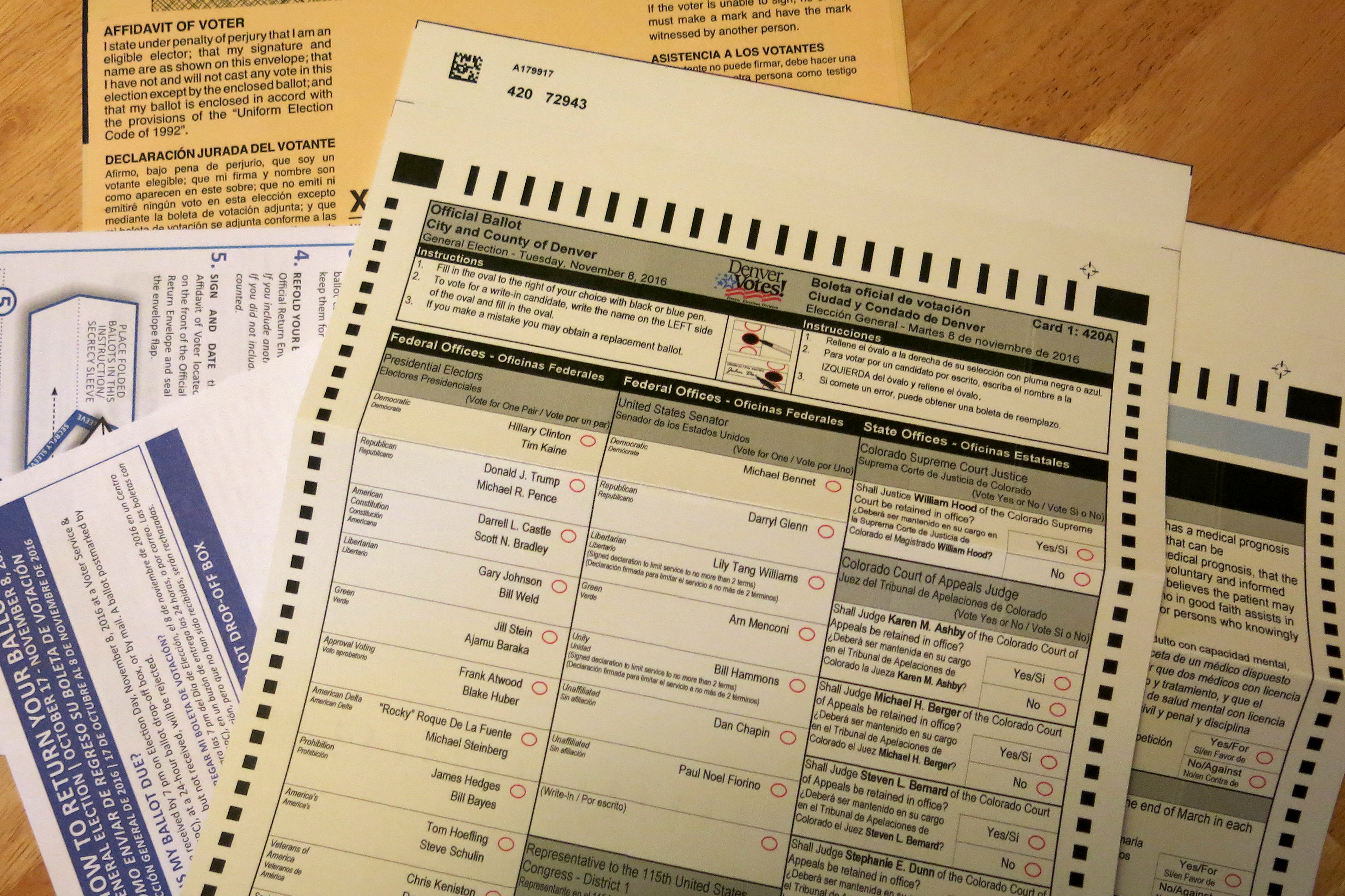 (Megan Verlee/CPR News)In Colorado, it's illegal for people to publish photos of themselves with their completed ballots. But it wasn't really on anyone's mind until last week, when the Denver district attorney warned people that posting a ballot selfie could land them a misdemeanor. Now the state is looking at one and possibly two lawsuits to overturn it. And there are a couple of state lawmakers promising to try to change the law in next year's session.

To be clear, we're talking about pictures of completed ballots:

It's totally OK to take and post a picture of your blank ballot, or your ballot in its envelope. The ban is on photographic proof of how you voted.

Why does Colorado even have this law in the first place?

It was passed in 1895 to help prevent people from being coerced into voting a certain way or from selling their votes. And to be clear, it isn't only photos of ballots that are outlawed; Colorado law states "no voter shall show his ballot after it is prepared for voting to any person in such a way as to reveal its contents." Photographs are just the most tangible proof that someone has violated the law.

Why the law is facing legal challenges in Colorado:

Opponents say it violates their freedom of speech. Caryn Ann Harlos, a member of the Libertarian Party of Colorado, told CPR News that as a minor party, it's important that their supporters be able to show they voted for, say, Gary Johnson for president, as a way of helping other people feel more comfortable about making that choice. Harlos plans to file a federal case against the law. There's also another lawsuit out there filed by state Sen. Owen Hill and a first-time voter, making similar arguments.

There's also been an effort at the legislature to overturn the ban:

Democratic Rep. Paul Rosenthal of Denver has introduced bills the past two years to overturn the ban but they haven't gone anywhere. He only learned that posting ballot pictures is illegal after putting up a picture of his own ballot a few years ago, "and then somebody emailed me and said, 'you might want to take it down.' And that really caused me to be just really irritated that somebody would tell me what I could do with my free speech."

Rosenthal's hoping the current controversy will aid his cause. It's already helped him find a Republican cosponsor; Hill has agreed to add his name to next year's bill.

There must be people who  support the ban:

The law definitely has defenders. They say that voter coercion does still happen and that having a ban on ballot photos protects people from being pressured to disclose how they voted.

It's ugly, at least according to Marilyn Marks, an activist who's worked on election security around the state. She says she's seen cases where poor people, especially, were forced to prove how they voted before they could access public services. Marks says this is more of a problem in local rural elections where just a few votes matter and there's not a lot of outside scrutiny: "I think it's harder for those of us who live in large metropolitan areas to understand the dangers that take place in small communities."

Colorado Common Cause also opposes changing the law. Director Elena Nunez says allowing these photos undermines the whole idea of the secret ballot. She fears it could lead to a climate where people feel pressured to post their ballots to social media, making it harder to resist family or work pressure to vote a certain way.

Other states have faced this issue:

The Associated Press found 18 states that have similar ballot photo bans. And lately the courts have not been very supportive of them. Judges have struck down similar bans in Indiana and New Hampshire, and cases are still being litigated in two other states. One can be sure that opponents in Colorado will look to those rulings as precedent for this case. But courts and lawmakers move slowly, so the real take away for Colorado voters is that at least for this election, find a way to show your electoral pride that leaves your completed ballot out of it, or risk facing legal consequences.