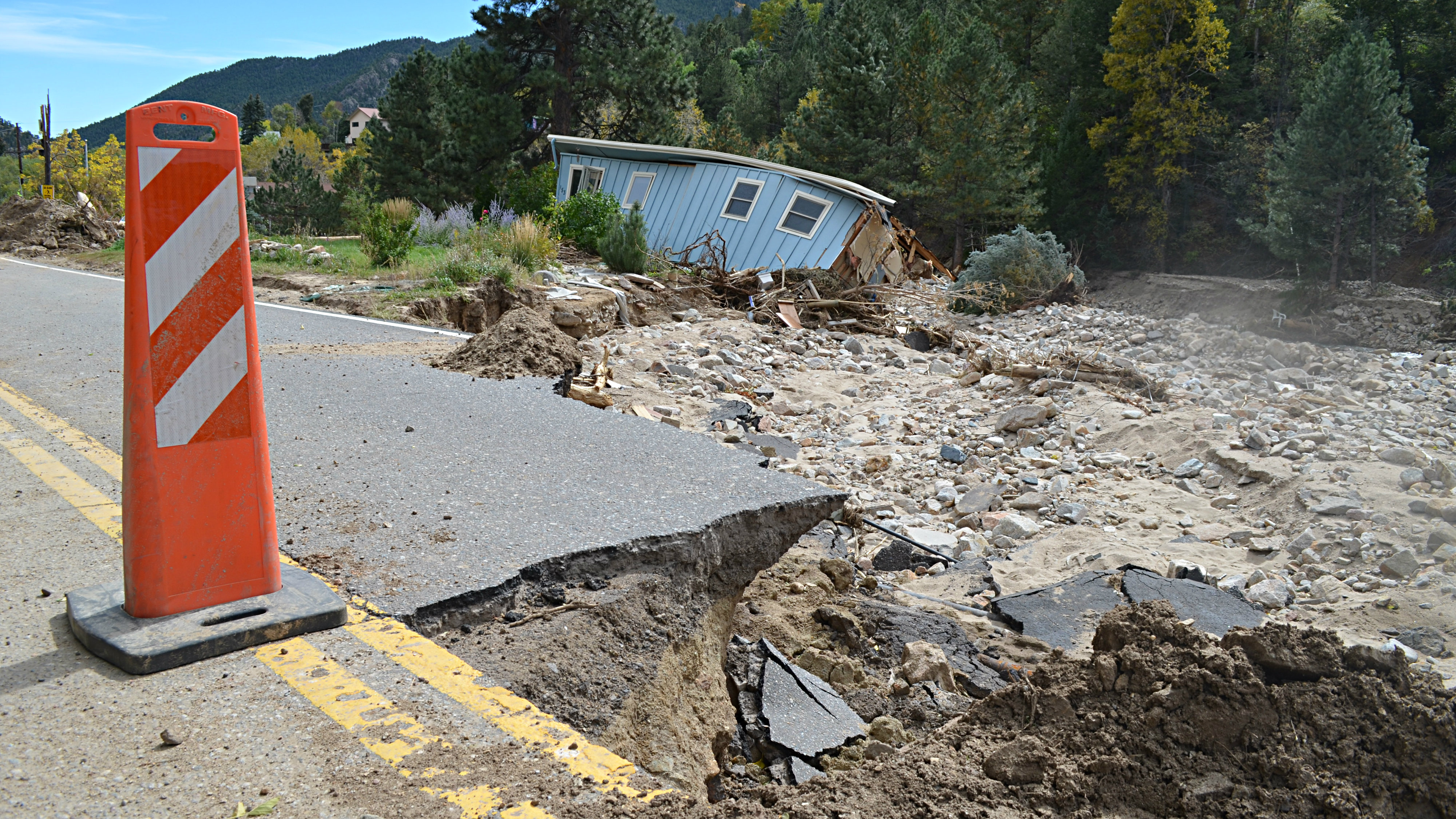 (Photo: CPR/Pat Mack)&lt;p&gt;This is what greeted visitors at the end of September when they drove into Jamestown on the only road that was open. The Little James Creek parallels the road on the right.&lt;/p&gt; 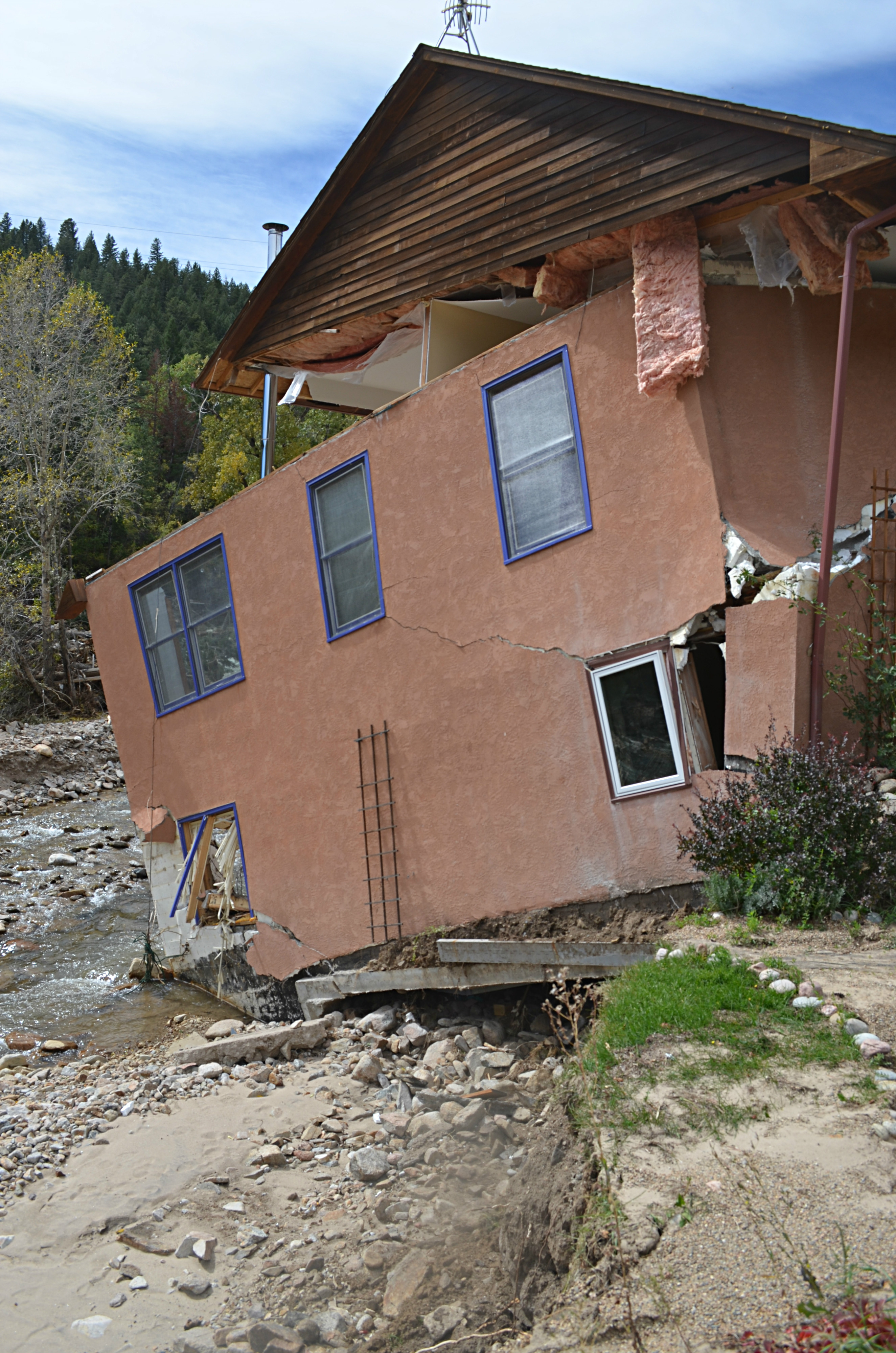 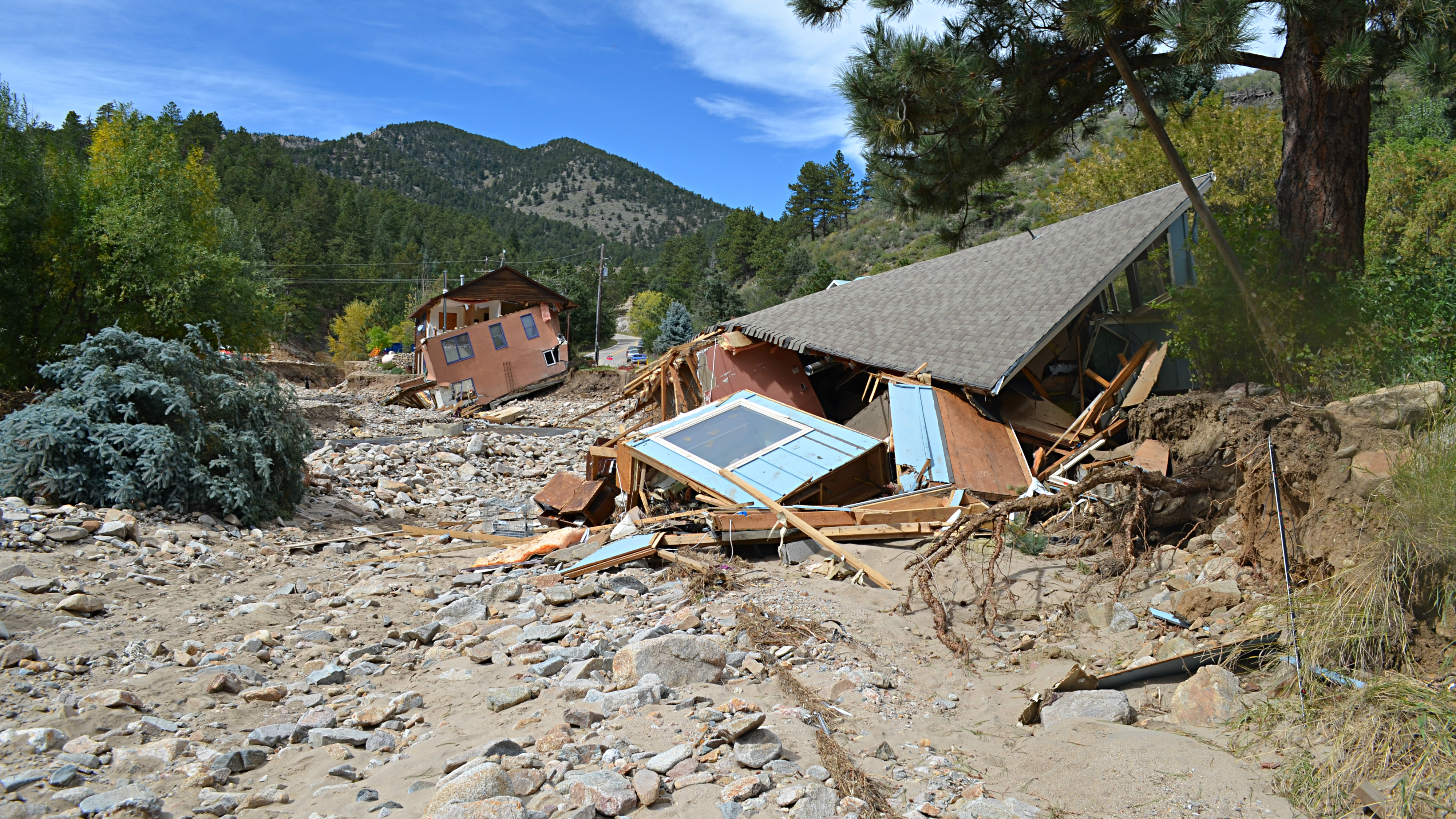 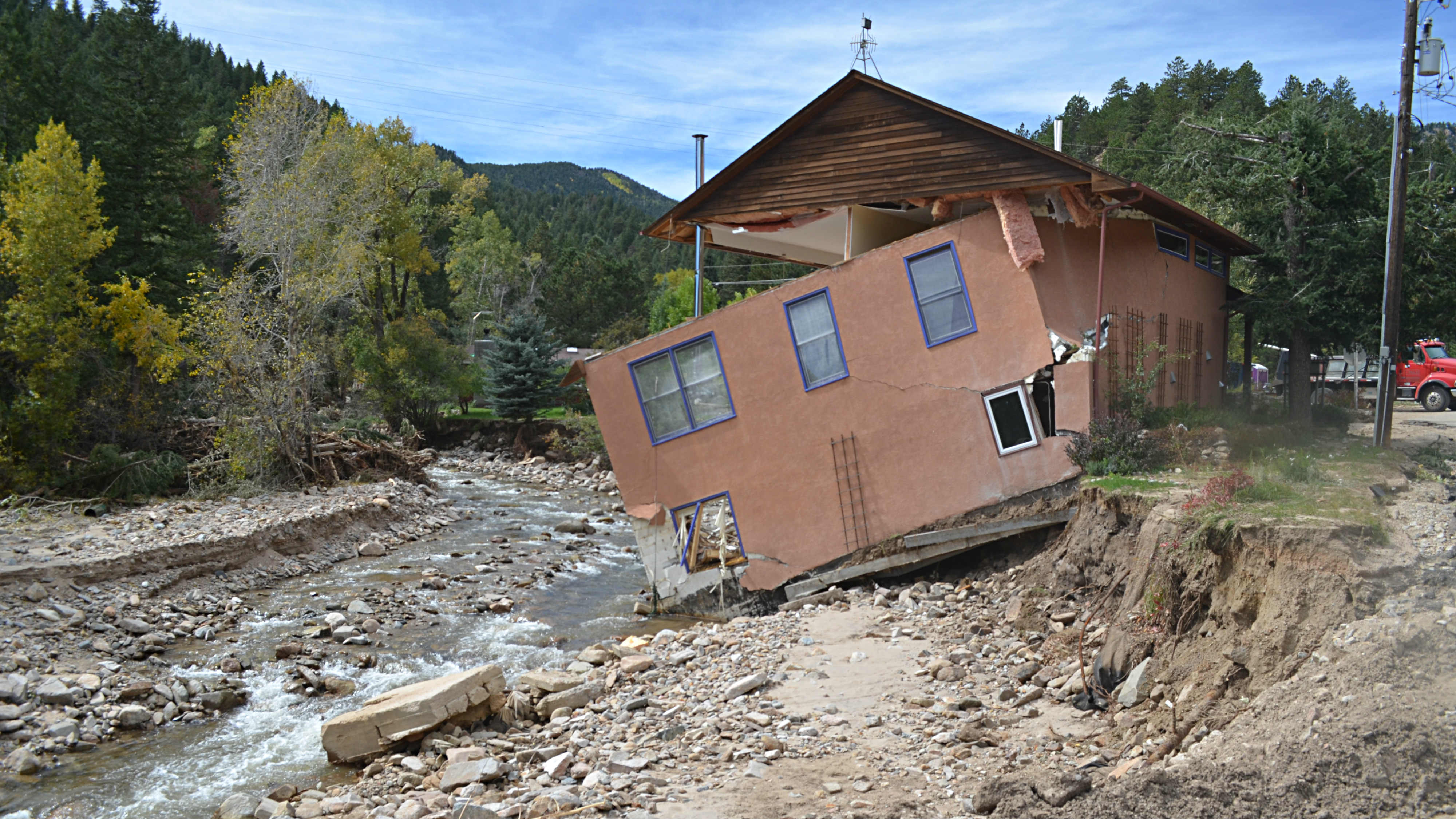 (Photo: CPR/Pat Mack)&lt;p&gt;A damaged home teetering on the brink of collapse on the Little James Creek.&lt;/p&gt; 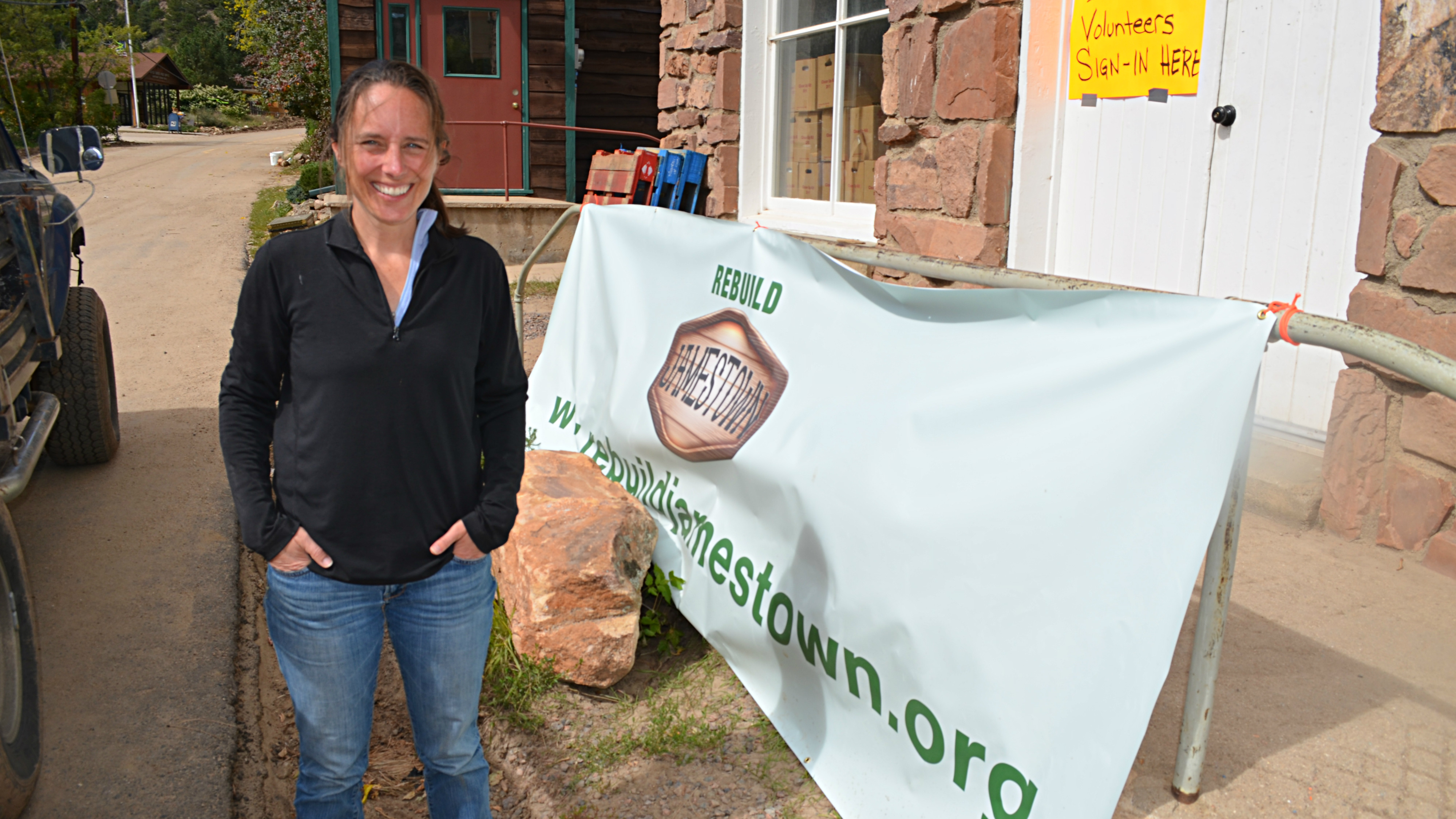 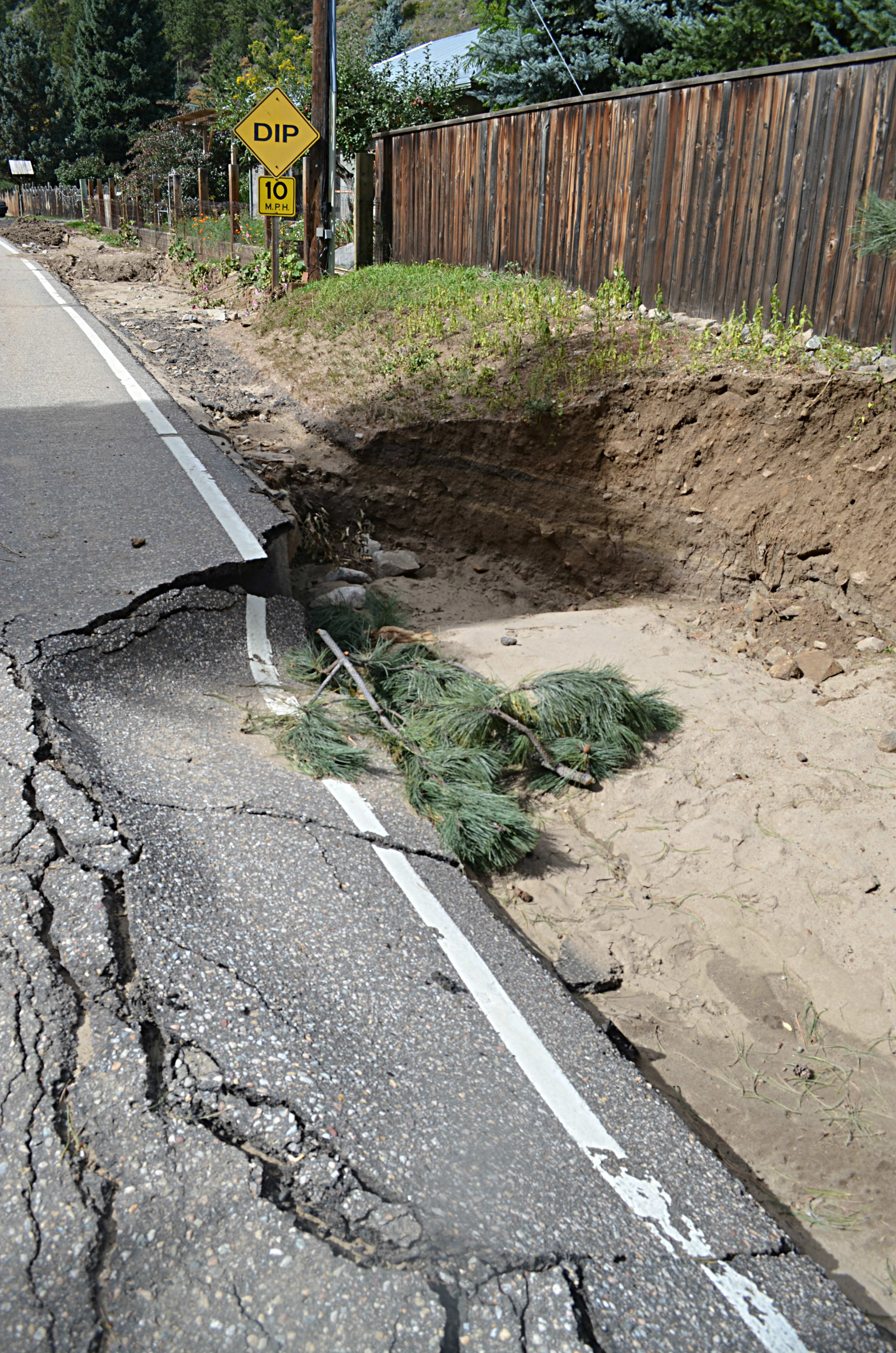 (Photo: CPR/Pat Mack)&lt;p&gt;A road sign appears to offer an ironic comment to the damage to this road.&lt;/p&gt; 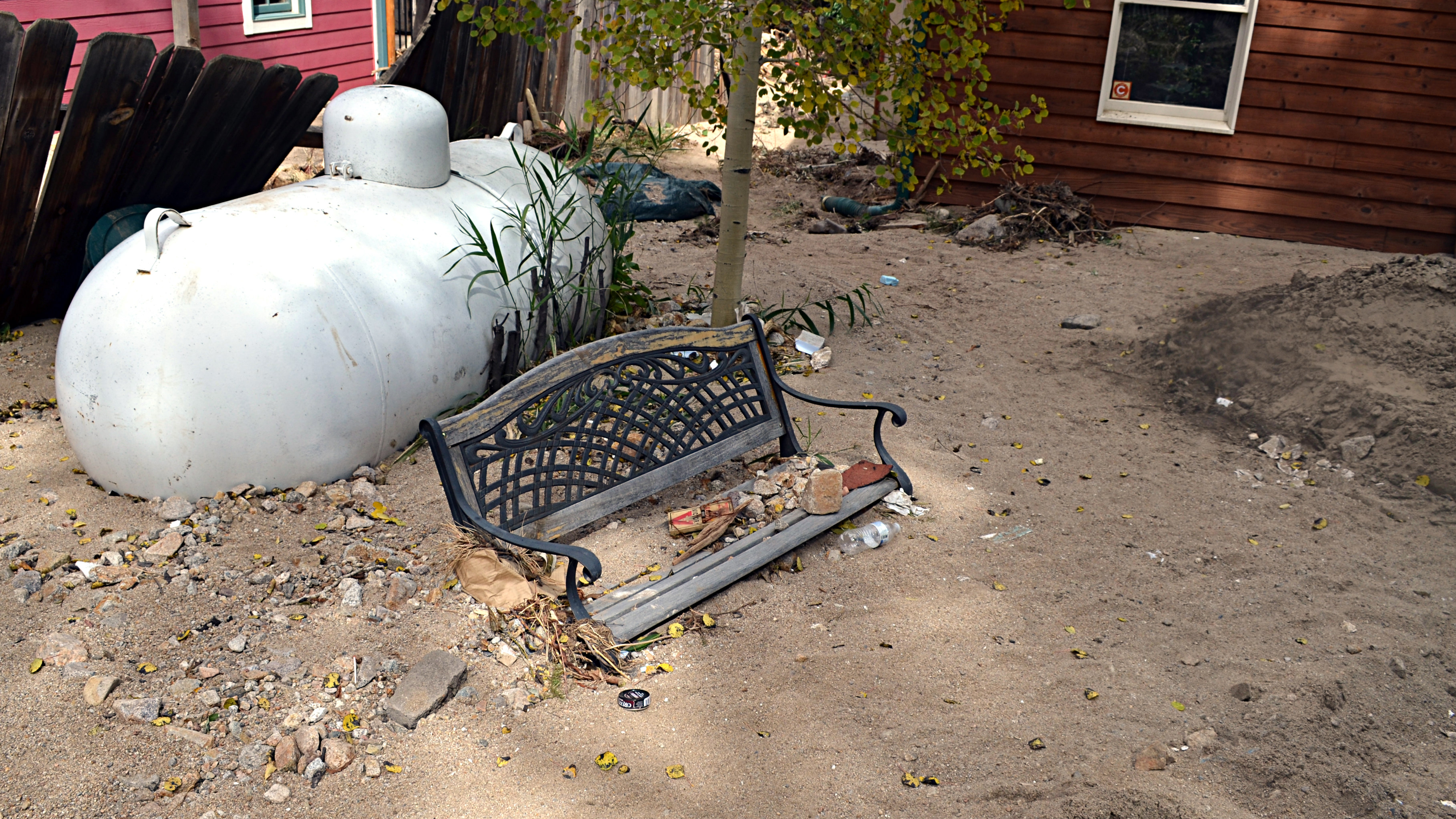 (Photo: CPR/Pat Mack)&lt;p&gt;So much sand and dirt filled this backyard along Lower Main that it buried this bench at the end of September.&lt;/p&gt; 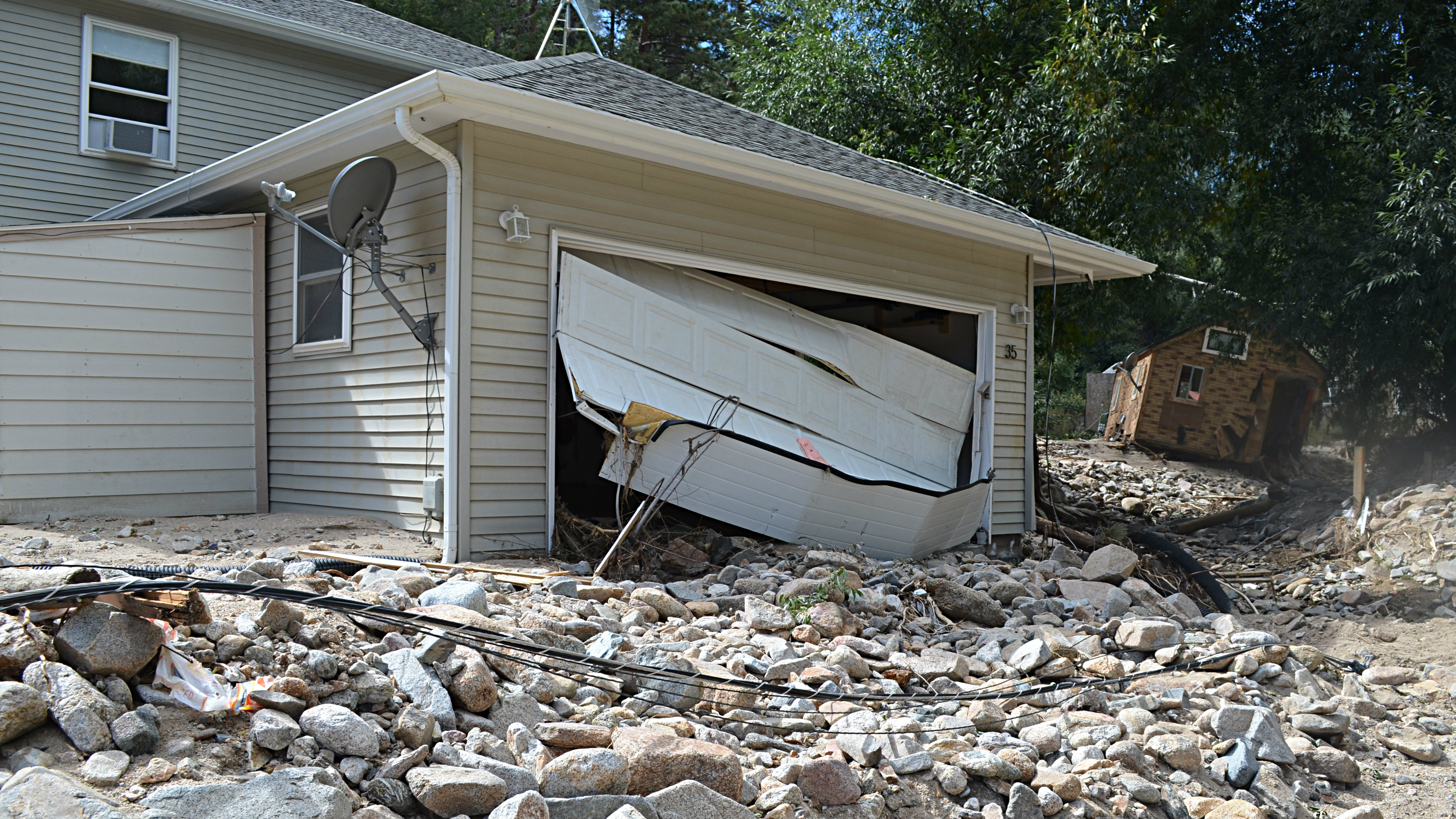 (Photo: CPR/Pat Mack)&lt;p&gt;The storm caused a rock slide as well as mudslide and flash flooding. This is the aftermath at the end of September in what was the driveway of a home on Lower Main Street.&lt;/p&gt; 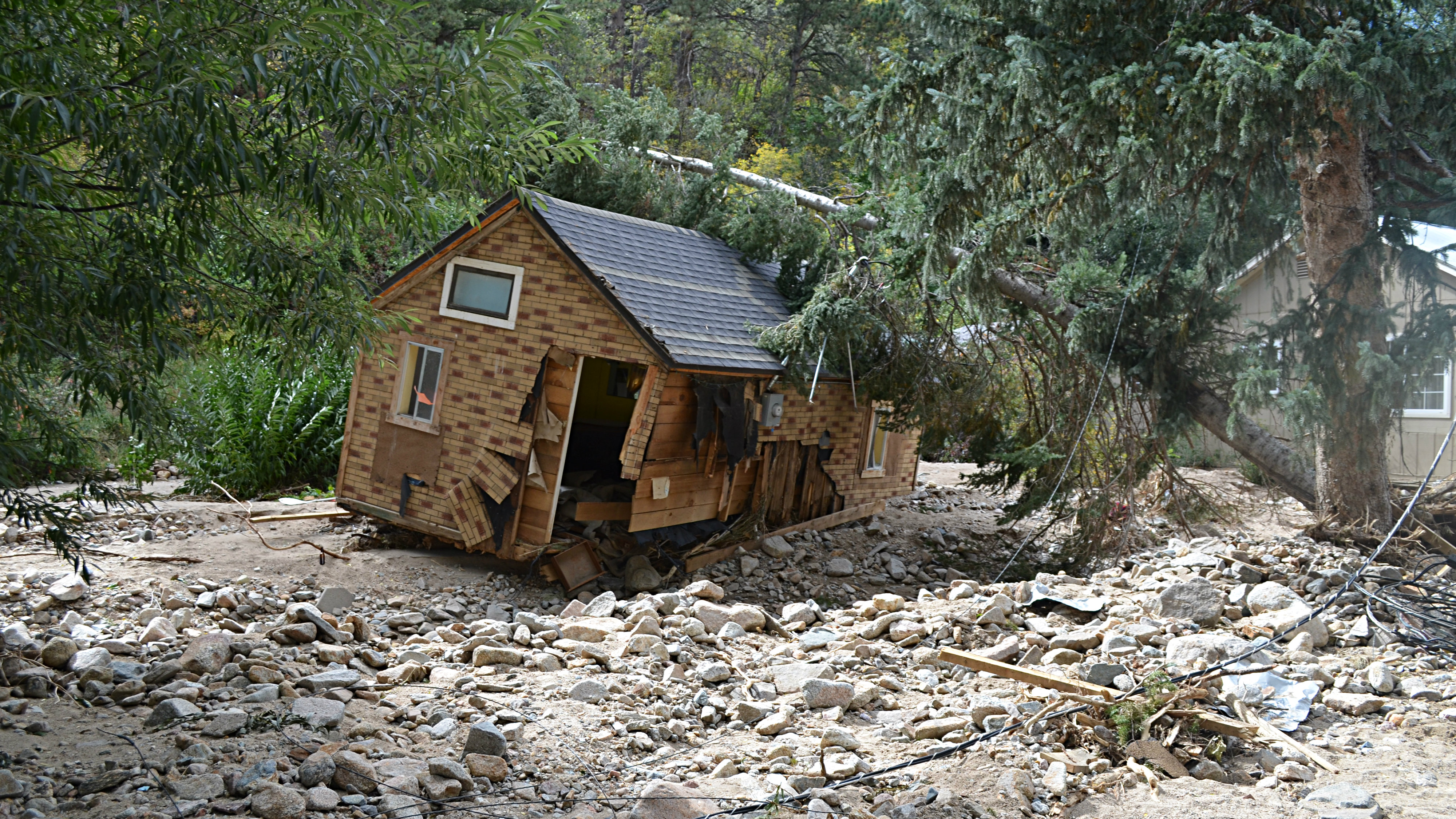 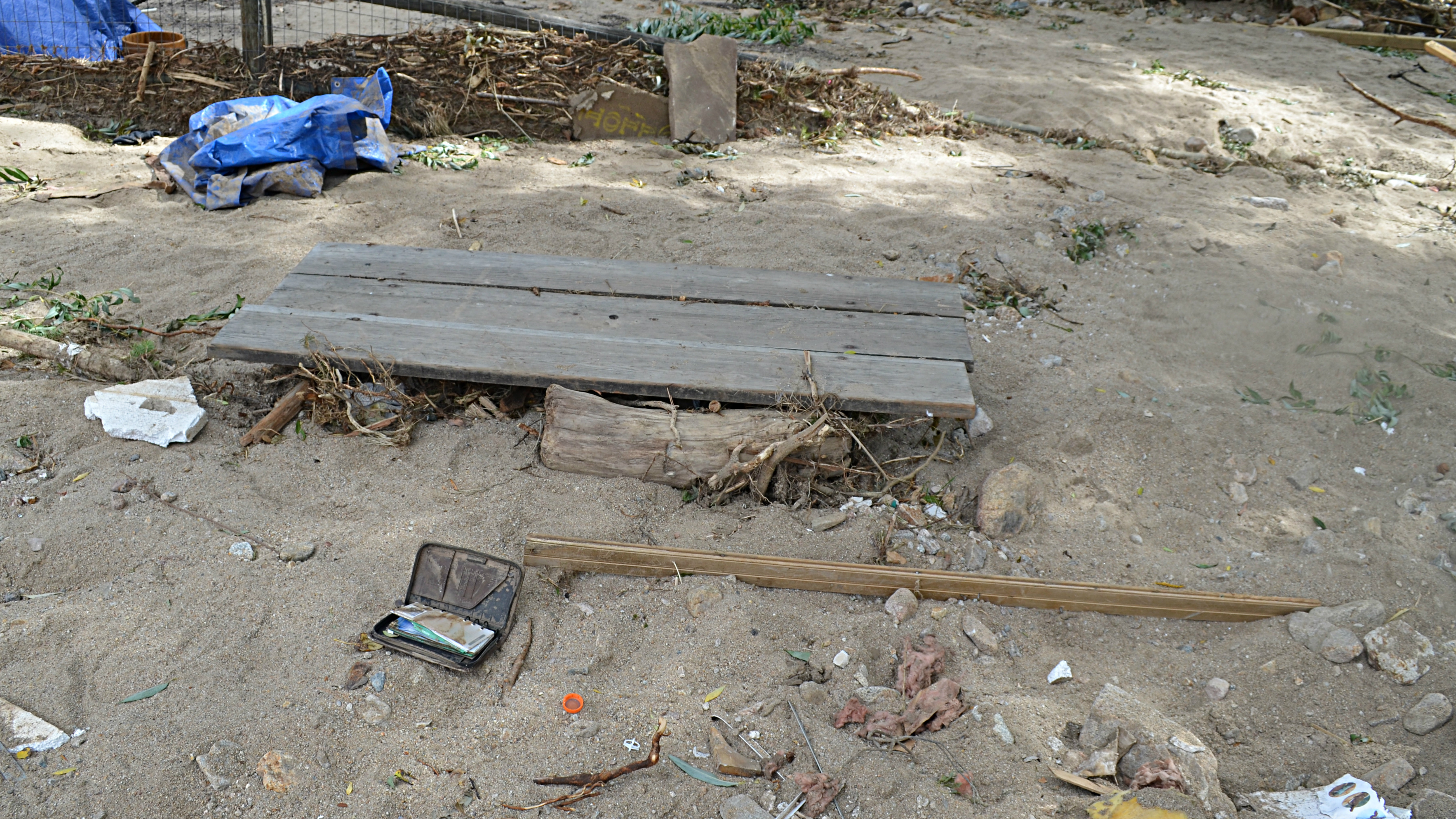 (Photo: CPR/Pat Mack)&lt;p&gt;A picnic table that you can now walk across the top of thanks to so much sand and dirt flushing into this backyard.&lt;/p&gt; 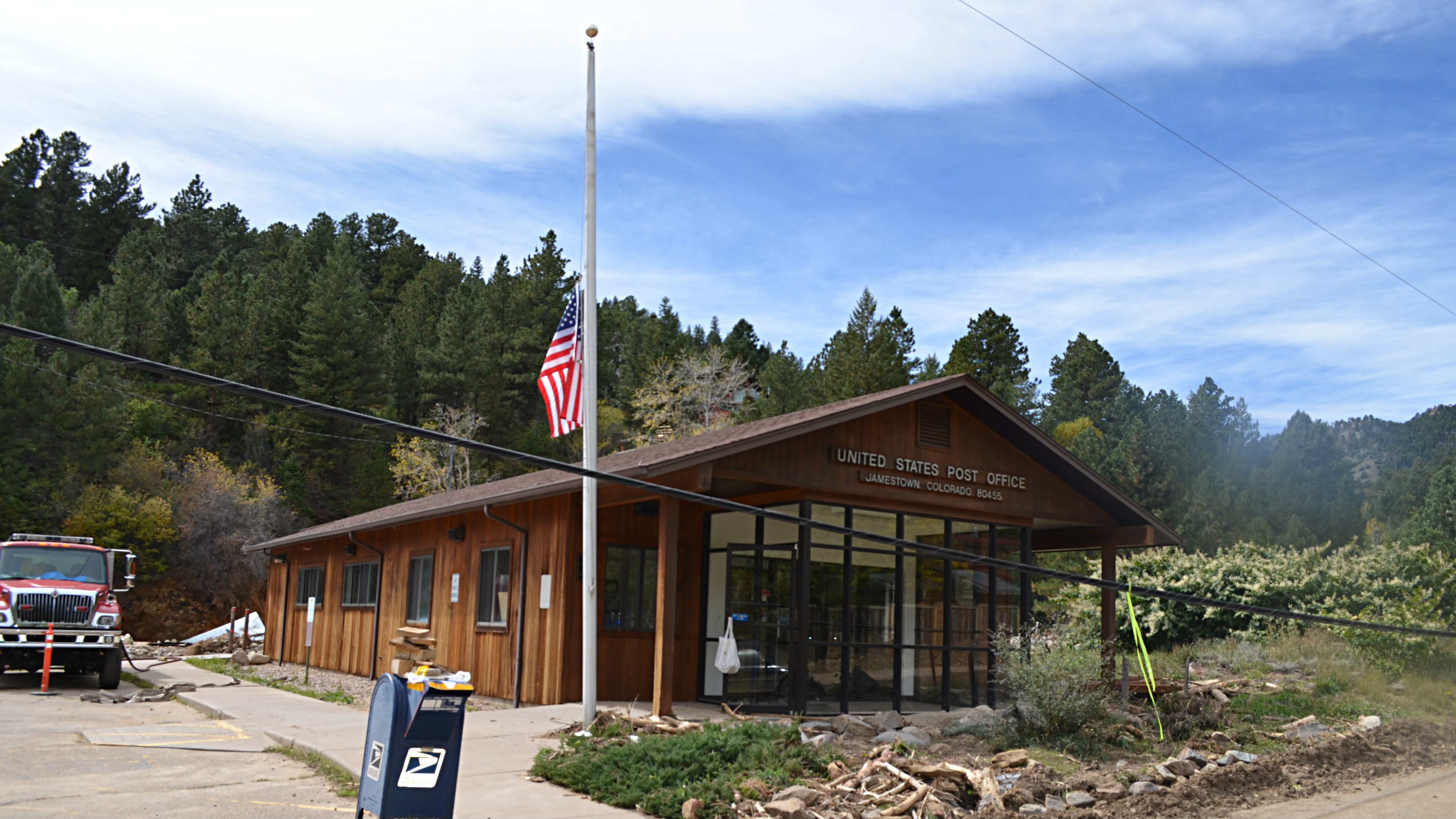 (Photo: CPR/Pat Mack)&lt;p&gt;The flag flies at half staff at the post office in honor of Joe Howlett, a community resident killed in the first hour of the storm.&lt;/p&gt; 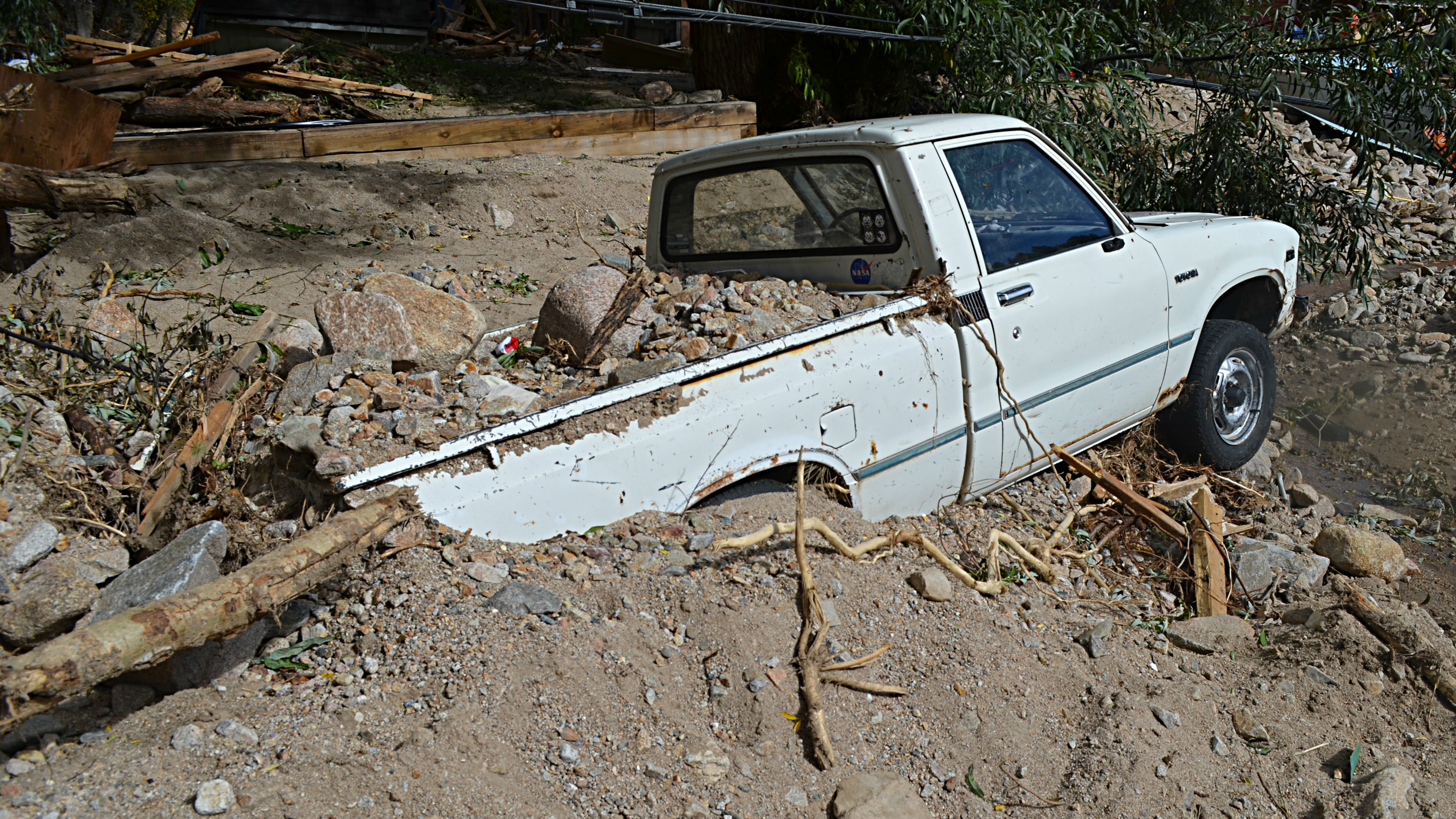 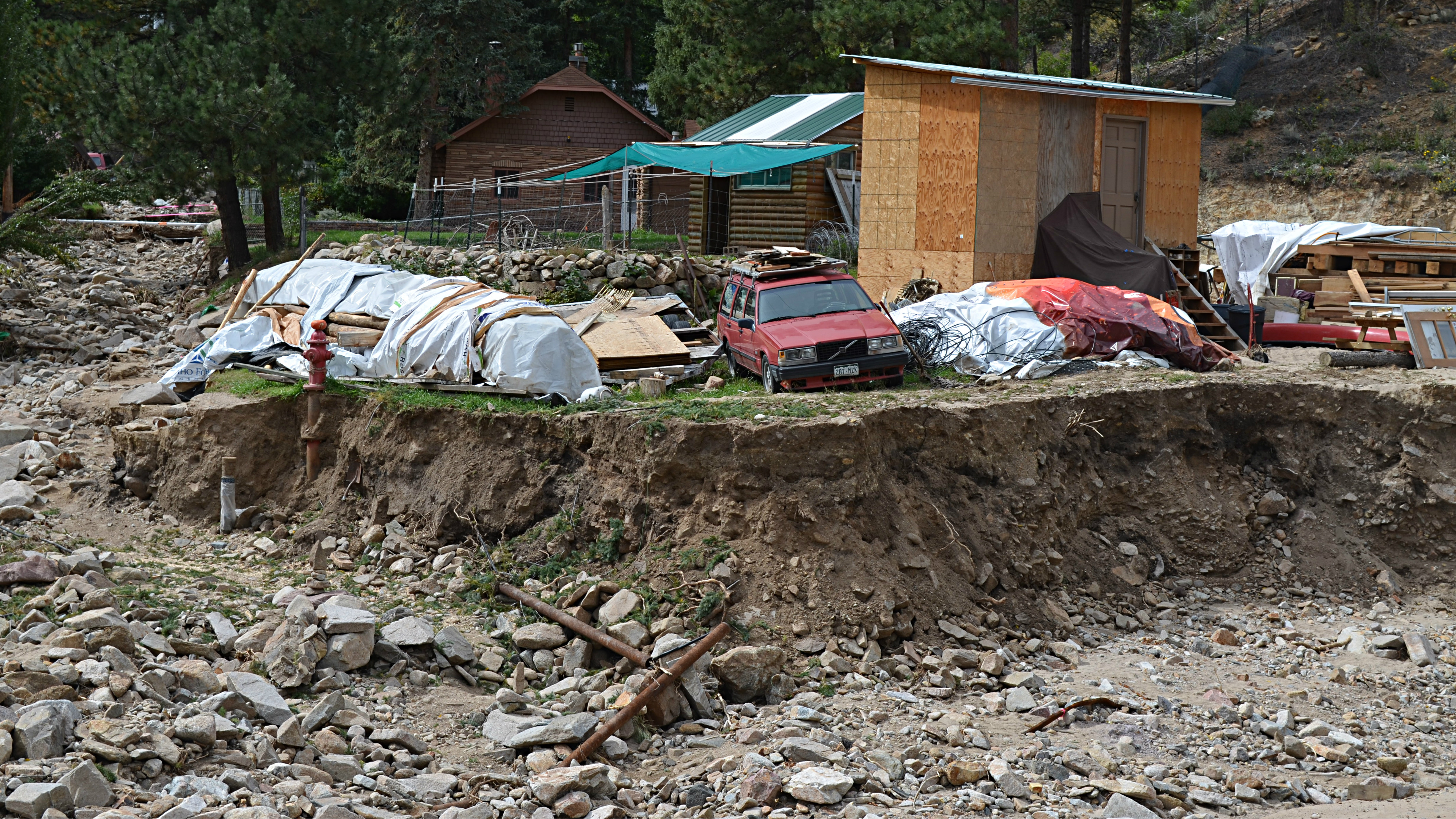 (Photo: CPR/Pat Mack)&lt;p&gt;A view of the damage where the Little James Creek and Big James Creek meet in the heart of Jamestown.&lt;/p&gt; 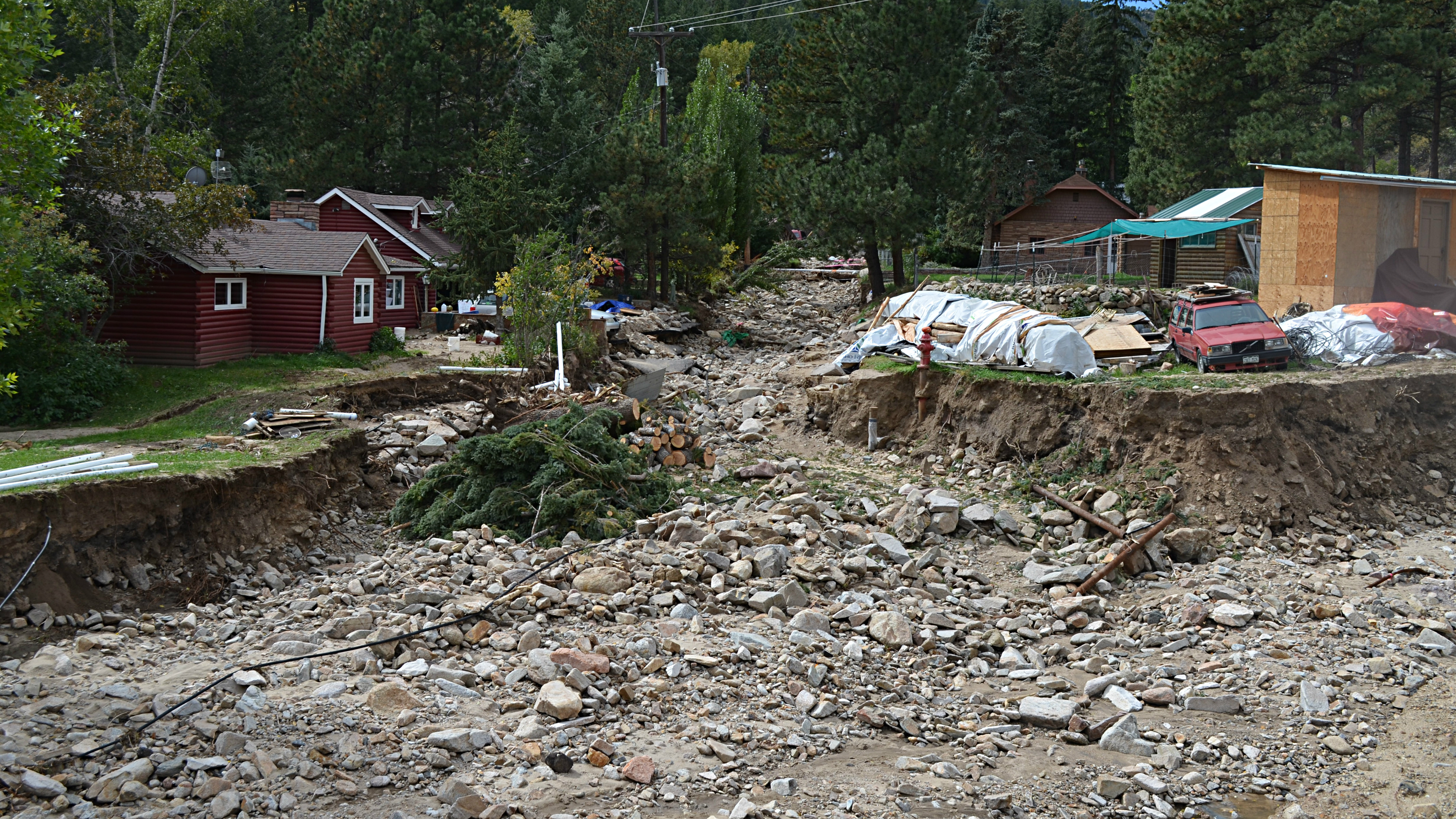 (Photo: CPR/Pat Mack)&lt;p&gt;The channels for the confluence of the Little James Creek and Big James Creek in the heart of town.&nbsp;&lt;/p&gt; 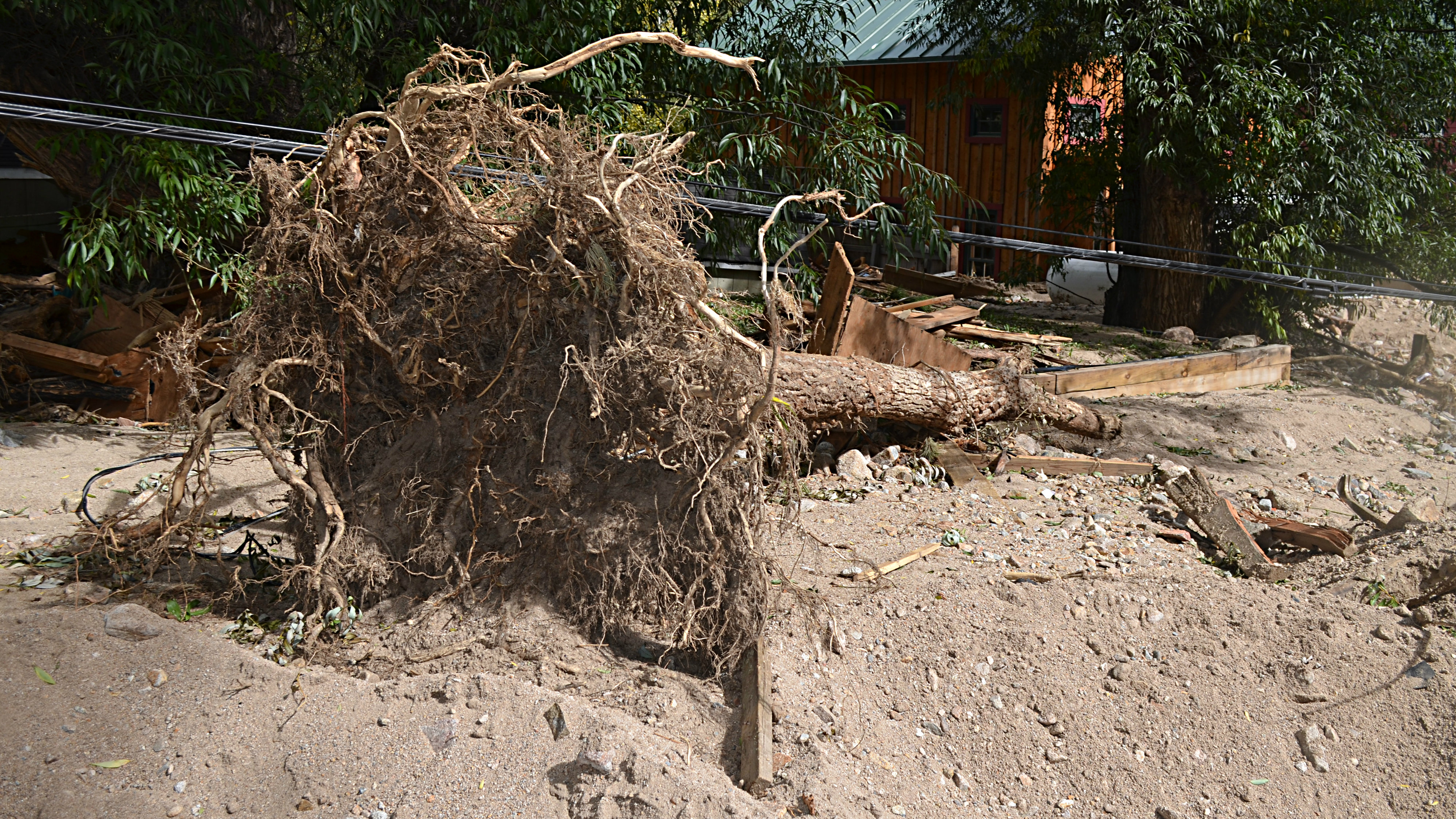 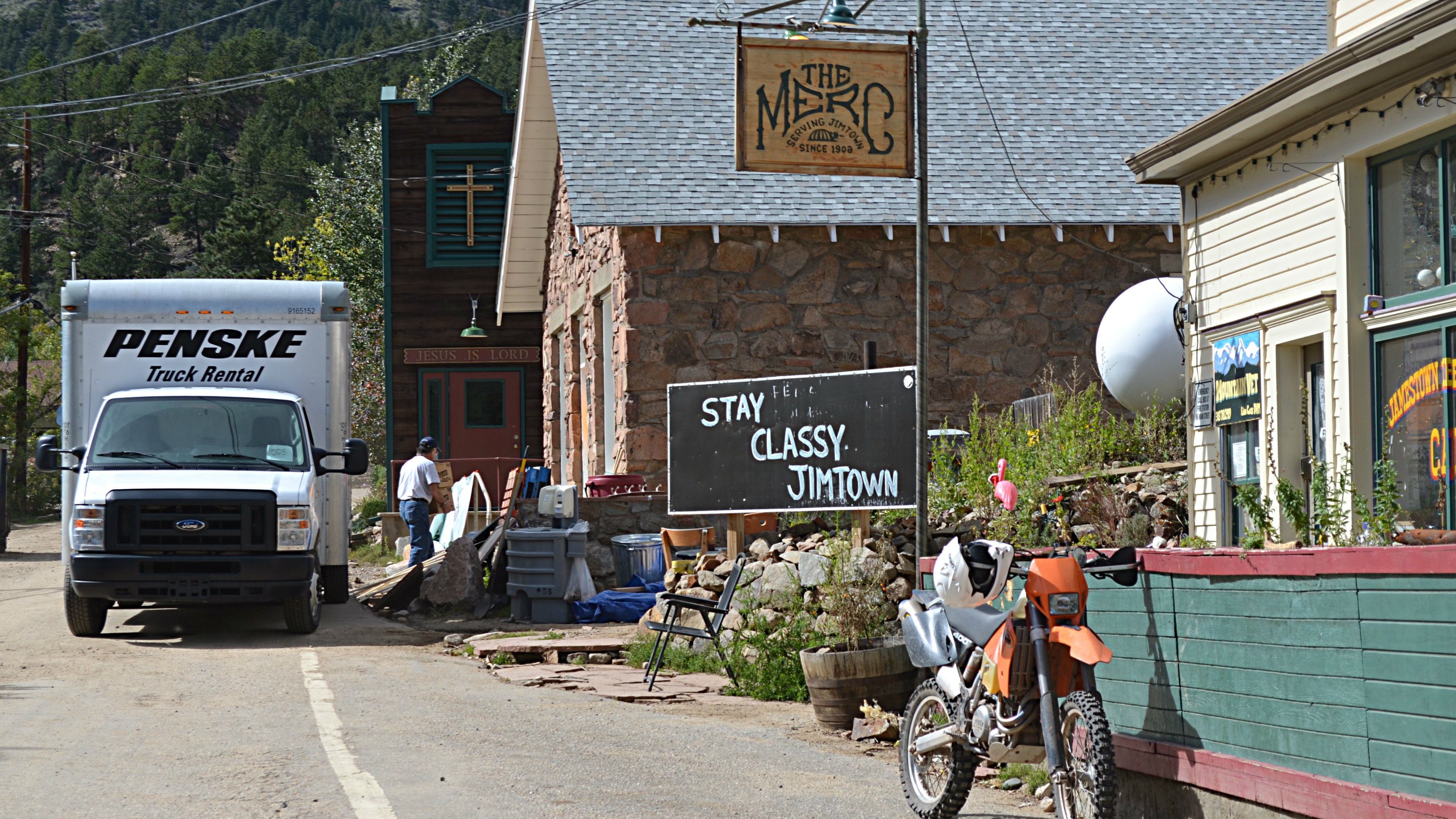 (Photo: CPR/Pat Mack)&lt;p&gt;Volunteers haul supplies into the town hall, a disaster aid center. It&#039;s the only place in town to get food, water, produce, cleaning equipment and other supplies. Next door is the cafe that was owned by Joe Howlett. He was the community patriarch and was killed in the first hour of the storm.&lt;/p&gt; 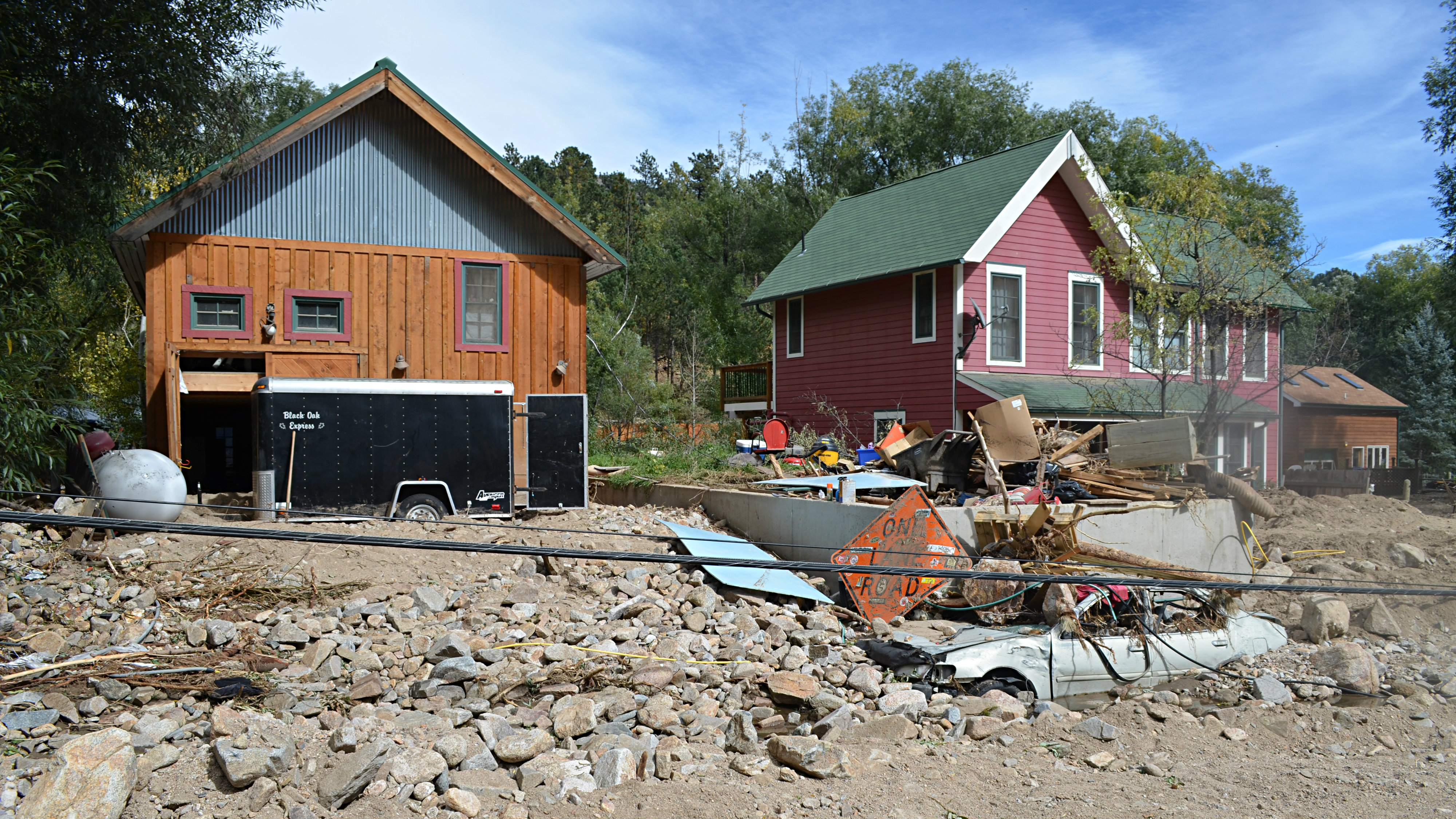 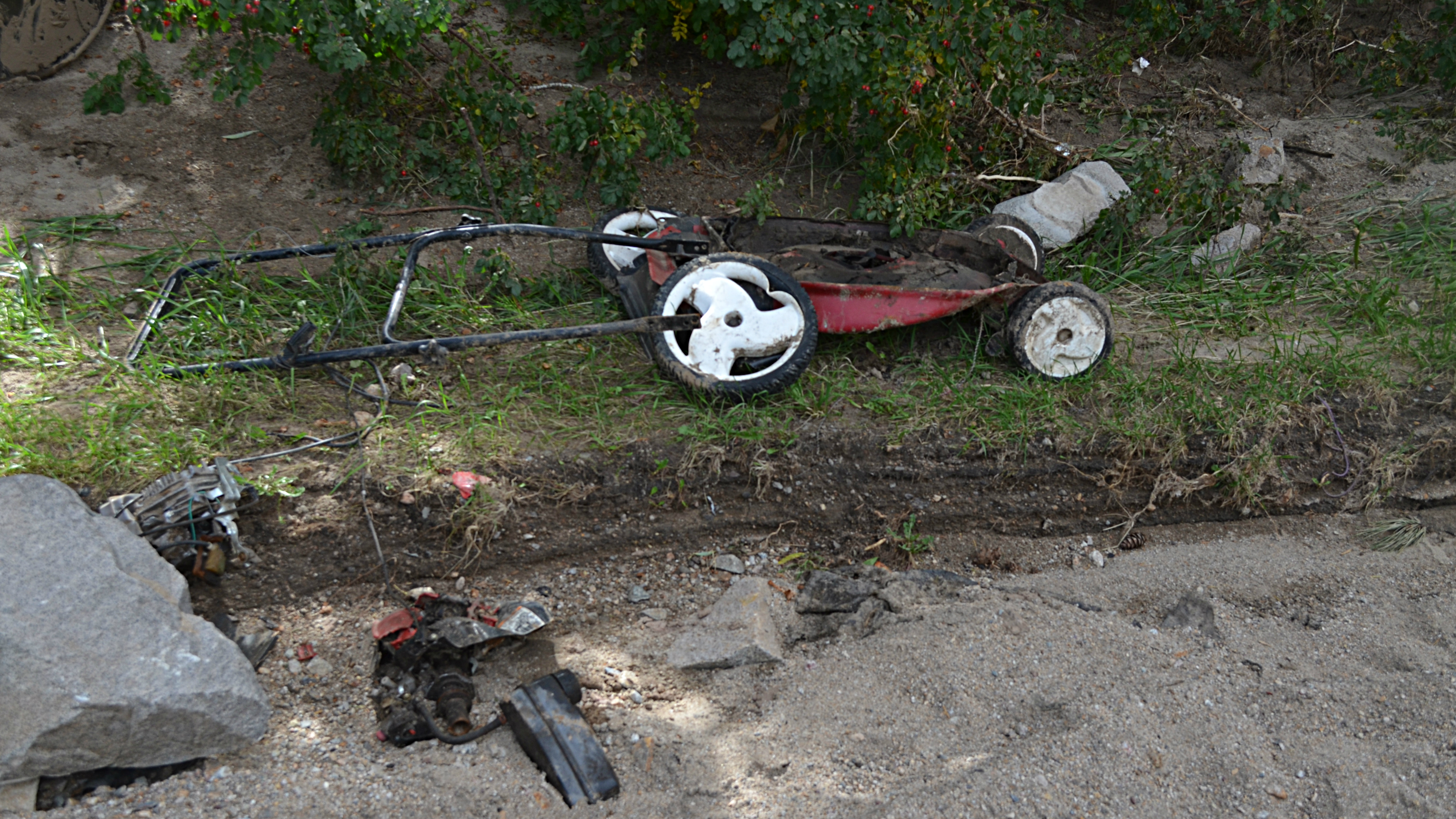 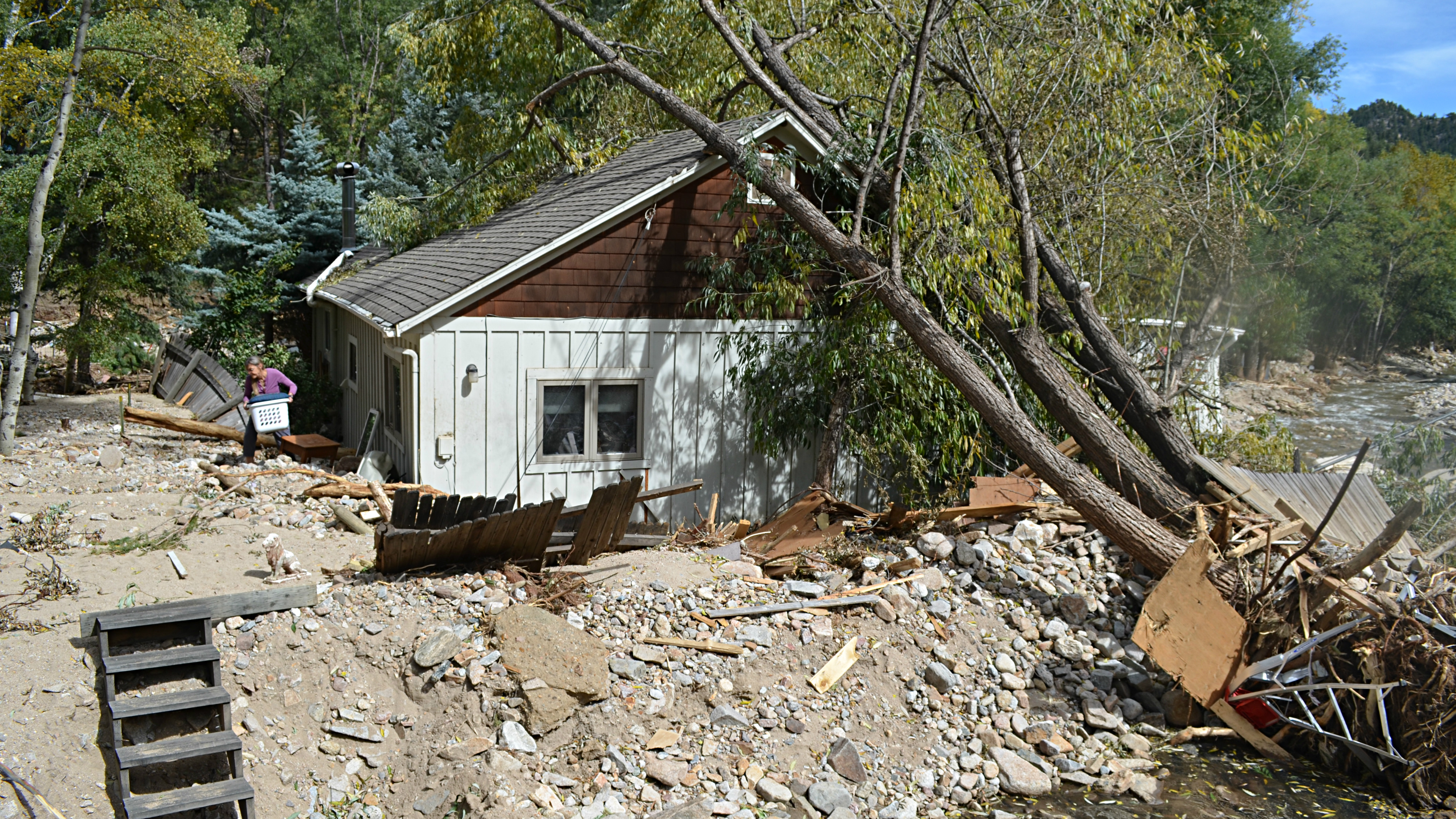 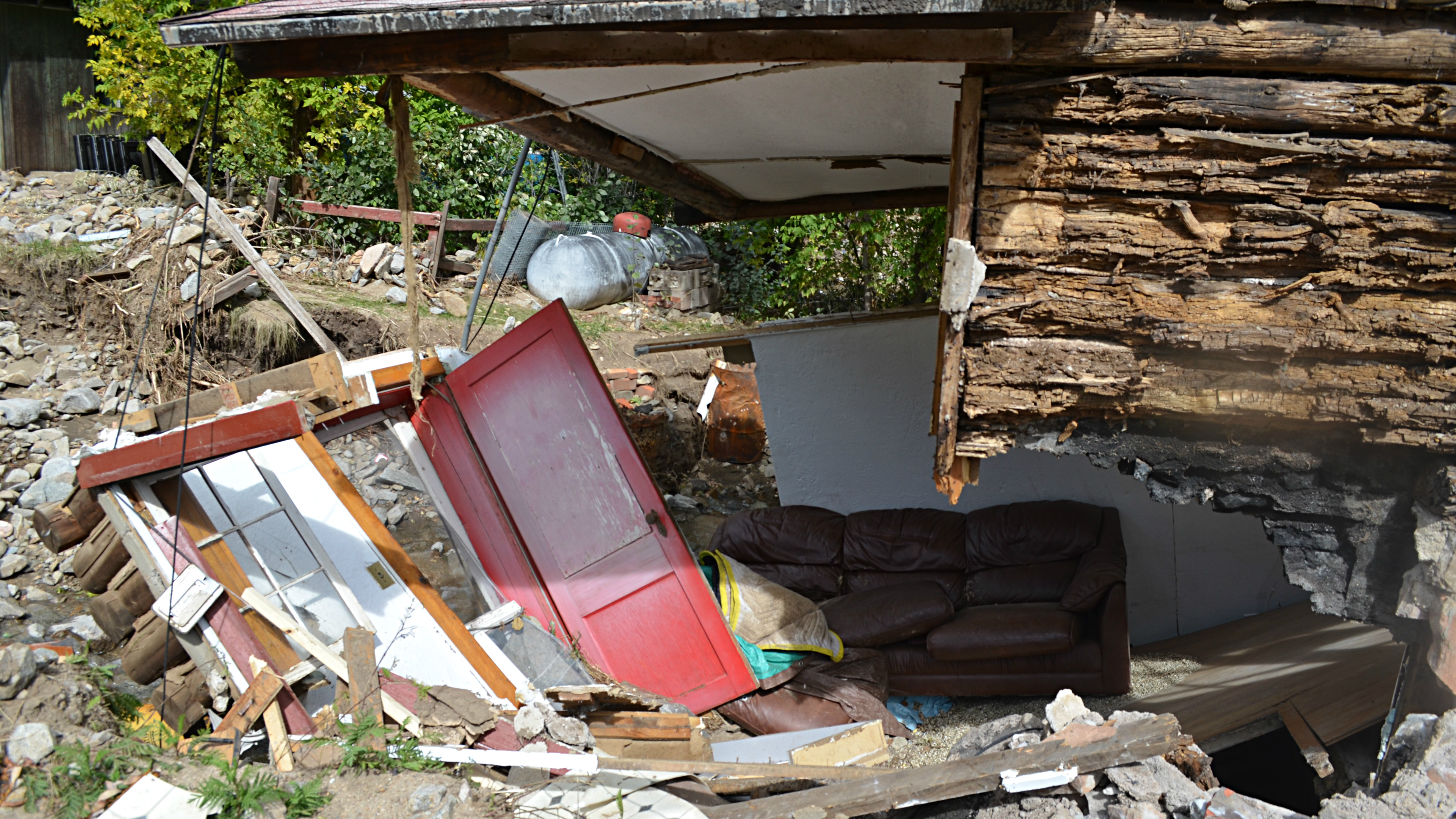 (Photo: CPR/Pat Mack)&lt;p&gt;A couch in this home appears to be one of the few things not destroyed.&nbsp;&lt;/p&gt; 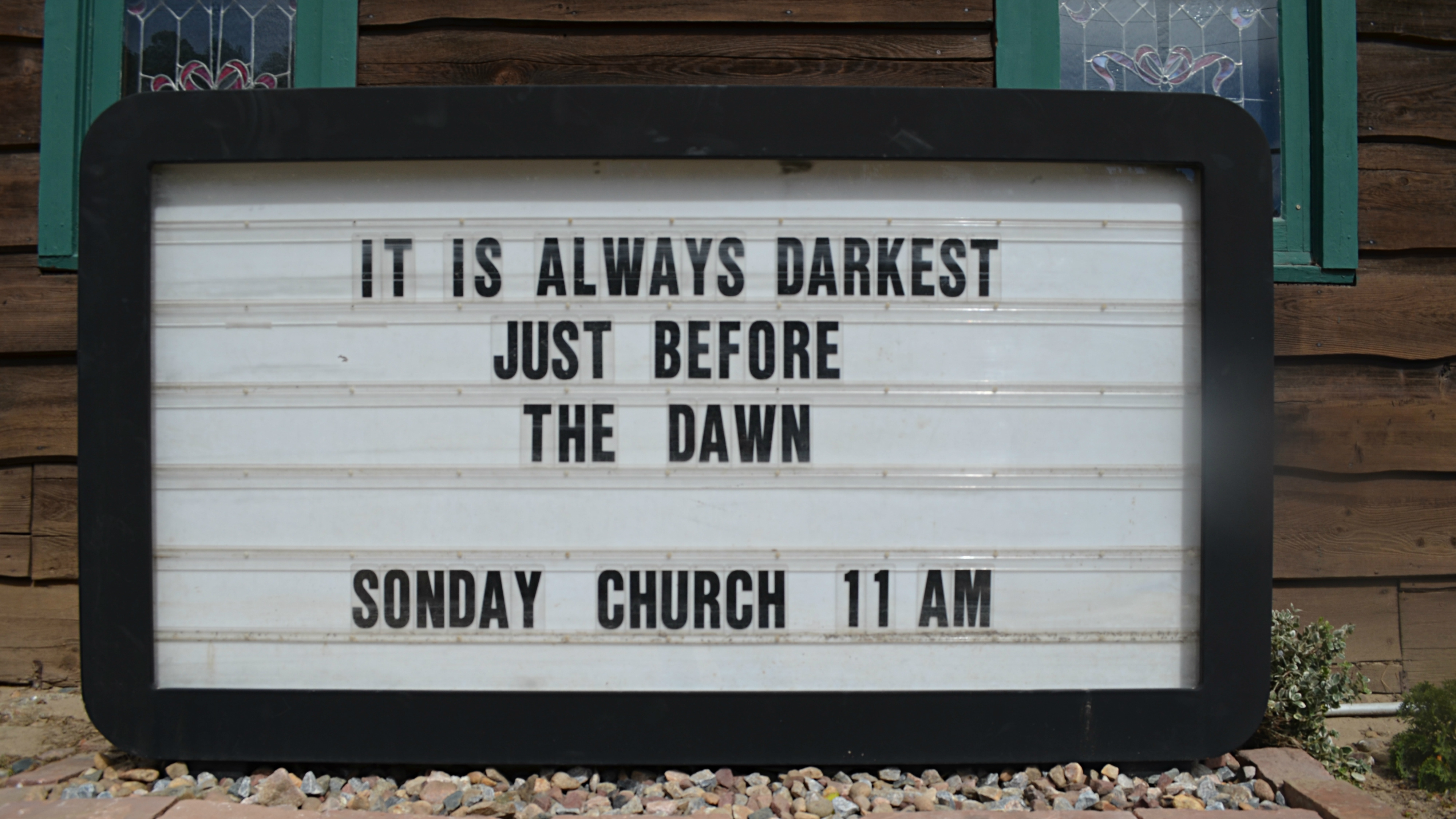 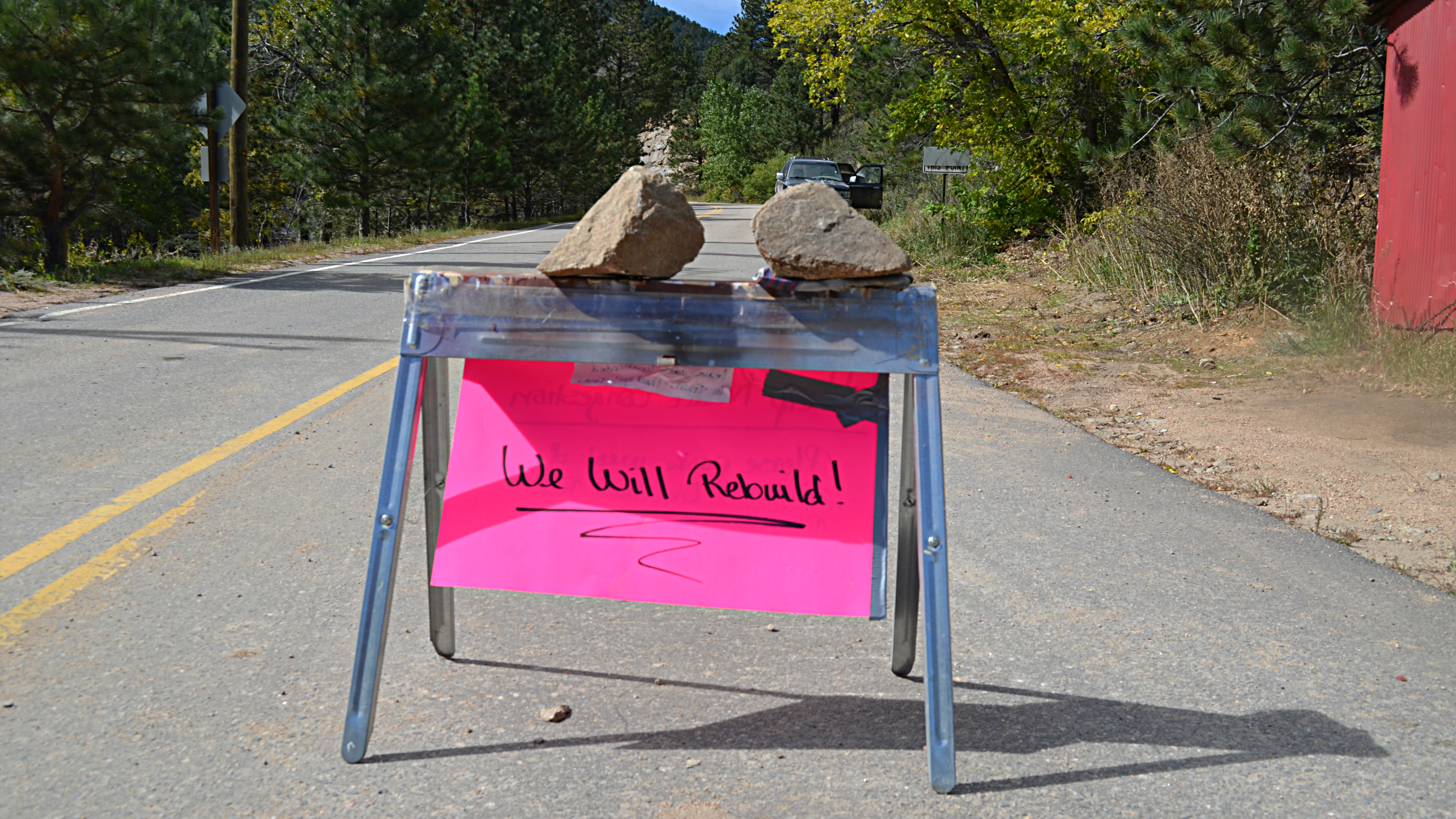 &lt;p&gt;This is the sign you see as you drive out of Jamestown, back to Boulder. This is the only route to and from the town. The trip to Boulder usually takes about 25 minutes but it&#039;s more than an hour with the emergency route.&nbsp;&lt;/p&gt;

Just getting to Jamestown is a chore. What’s normally a 25-minute drive from Boulder now takes more than an hour, along a mostly bumpy, gravel road.

Driving into town, you see homes that were crumpled by the storm. So much sand and dirt fills one backyard that only the top of a picnic table is visible. A few vehicles are still buried nearby, and several roads remain washed out.

She’s not sure if experts who have come to town have accurately estimated the cost of rebuilding. She’s heard the price tag could reach $25-30 million. The town needs to replace the fire hall, both bridges, half the roads and the water treatment plant. It also must fix the Big and Little Jim Creeks that converge in the heart of town. They were the source of the flooding, and now Jamestown needs to put them back in their channels.

It’s a lot of work and a huge tab for a town of 275 people. The community is hoping for government aid, as well as private donations through its Rebuild Jamestown website.

Mayor Schoedinger’s home was spared, but she thinks even those who lost everything will rebuild.

"We will do this," she said. "It’s overwhelming but we will make it happen."

Authorities are limiting access to town for safety reasons. Most residents are living elsewhere.

There’s no drinking water and only spotty phone and Internet service. Not all power has been restored.

The one business in town, a cafe, was owned by the community patriarch, who was killed during the storm. It remains closed. The only food and supplies available in town are at a disaster center in the Town Hall.

Down the road from the Town Hall, Wendy Stokes is taking a laundry basket full of items away from her destroyed house. It’s her first time back since evacuating. She gets emotional recalling her home and the creek that meandered through her backyard.

"It was paradise to me," she said, "but it made me realize so much about this community, 'cause I’m imagining, where else would I live? And this is where my heart is."

Stokes and her husband, Tim, have flood insurance and hope to rebuild, but that process is on hold, along with other rebuilding plans. A moratorium on building permits is in place in Jamestown, while the town creates a master plan.

Mayor Schoedinger says that plan will outline where the creek will flow and where new roads, bridges and city facilities will go.

"My hope is that we can get a master plan done as quickly as possible, so that people can start thinking about how they move back here and rebuild their lives here," she said. "I think the longer we wait to do that, the more we risk that not happening and people starting to figure out how they lay down roots elsewhere."

Sandra Levitt is ready to move on. The road to her home hasn’t been repaired yet. She lost her back porch, and the first floor of her home was flooded. "Would you like to buy a house with an ocean view?" she asks.

Levitt actually listed her home for sale a few weeks before the storm. She’s lived in Jamestown for fourteen years. "I'm hoping there’ll be some end, some resolution," she said. "If they build a road where I live, I’ll take all my stuff out, put it in storage, and think about where to live."

Lynnie Middledorf agrees. Her house is in relatively good shape, although the yard was damaged. "If there's a community that will rebuild, it will be Jamestown," she said. "People want to come back. They love their community and their neighbors, and I think our biggest fear right now is just being separated from each other."

A sign in front of the church next to Town Hall reminds people that "It is always darkest just before the dawn." With winter looming and so much work to do, morning might not arrive until spring, at the earliest.