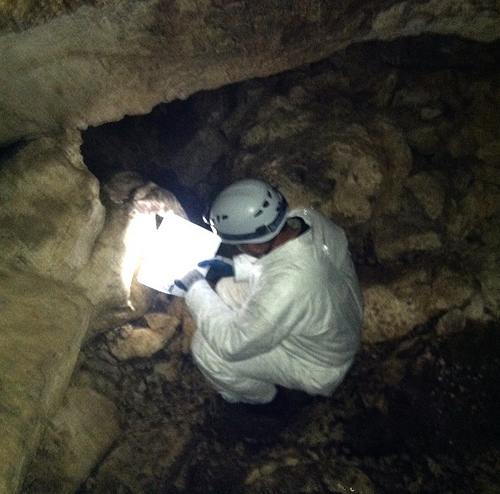 Pat Mack/CPRCaves on U.S. Forest Service land in Colorado have reopened this fall.
The Forest Service in the Rocky Mountain Region had closed them three years ago to try to keep a deadly bat disease out of the area.
Now, with a few restrictions, cavers can once again explore the underground caverns. But one environmental group thinks it’s a mistake.
I accompanied U.S. Forest Service wildlife biologists Lara Duran and Phil Nyland into Fulford Cave near Eagle, Colo. They descended an angled, 30-foot ladder mounted inside a culvert pipe.
Their helmet lights expose glimpses of jagged rock, some coated in ice under our feet. Nyland points out, unhelpfully, that this is not a place to break your back or your leg.
"The standard caving joke before you go into a cave is you lean back and look at everyone in the group and say, ‘New York Life, why do you ask?’ And then go in," Nyland laughed.
But neither biologist jokes about White Nose Syndrome. The fungus can turn parts of the skin of hibernating bats white. And it can cause them to deplete their fat reserves too early. It’s killed millions of bats in the eastern United States and it  loves cool caves.  Nyland uses a flashlight to check the cave’s crevices.
"We’re just taking a quick look to see if we can find any bats before we move on into the cave," Nyland explained. "But so far I don’t find any."
Closure order
Since bats are regular visitors to caves like these, the U.S. Forest Service closed them in the Rocky Mountain Region in 2010 when White Nose was confirmed in Oklahoma. Trey Schillie is with the Forest Service.
"We wanted to be protective, proactive and since that time the fungus hasn’t made any Western progression," he said.
That closure upset the caving community in Colorado. Rick Rhinehart is author of the book, Colorado Caves.
"The August 2010 closure, I believe, was one of the most traumatic experiences for cavers in the western United States, simply because we had a very long relationship with the forest service," Rhinehart said.
Rhinehart added that without access,  the state’s spelunkers could not help monitor cave and map them, some for the first time.
"You know, coming into new rooms and new chambers that no people have ever seen in the history of the planet," he said. "And you’re the first person there, and it’s a pretty exciting moment knowing you’re the first eyes to ever see this."
The forest service says it lifted the emergency closure for several reasons. White Nose hasn’t spread farther West. Scientists now believe the syndrome is most likely spread from bat to bat and not from humans to bats. And, the Forest Service didn’t have the resources to enforce it.
"The closure order was on paper only, and it never was very effective," Rhinehart said.
Caving restrictions
The reopening did come with a few strings.
A handful of caves critical to bat habitat remain closed at least part of the year. Cavers are now required to register online beforehand. Gear from states where White Nose Syndrome has been confirmed is not allowed. And after their visit cavers need to clean their gear in case any fungal spores latched on.
"You know, it’s not like the door is wide open right now," Schillie said. "There are still a lot of requirements that we’re asking cavers to abide to."
Opposes reopening
One environmental group believes the caves should have remained closed. Mollie Matteson, with the Arizona-based Center for Biological Diversity, says the Forest Service in the Rocky Mountain region is sending a bad message to land managers in other parts of the West.
My organization have been advocating for more widespread precautionary measures," Matteson said. "This is a huge step backward."
She would have liked the caves to remain closed for a few more years since so much is still unknown about the syndrome.
"This is a crucial moment that we’re in," she said. "There are scientists working on potential cures or at least treatments that could help with containing this disease."
But others argue that in addition to being unenforceable the closure order didn’t even apply to all caves in the state since there are many caves in Colorado that aren’t on forest service land. They believe educating the public about sanitizing gear is more realistic. But even that’s a tall task. A spot enforcement day recently at Fulford Cave found visitors hadn’t registered online or decontaminated their gear.